Celebrate the release of Disney’s Ralph Breaks The Internet with these adorable “You’re My Hero” cookie medal krispie treats – perfect for a fun family movie night! 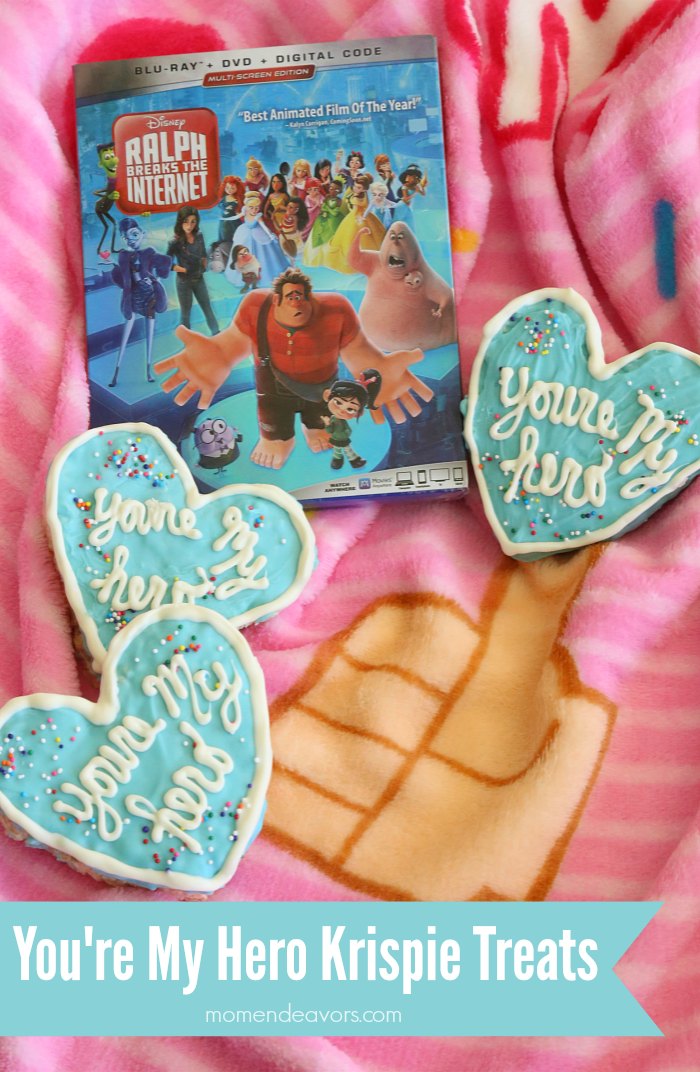 After attending the Ralph Breaks The Internet red carpet premiere (all dressed up with a Vanellope-inspired look) at the invite of Disney (as part of the #RalphBreakstheInternetEvent media trip), I’m extra excited that the movie is now out on Blu-ray to enjoy at home! If you haven’t seen it already, you can read my Ralph Breaks The Internet parent movie review here. I definitely think it’s one that would be fun to do a whole family movie night with. You know I love a good family movie night – especially one with themed movie treats! So, how about some Ralph & Vanellope inspired krispie treats? 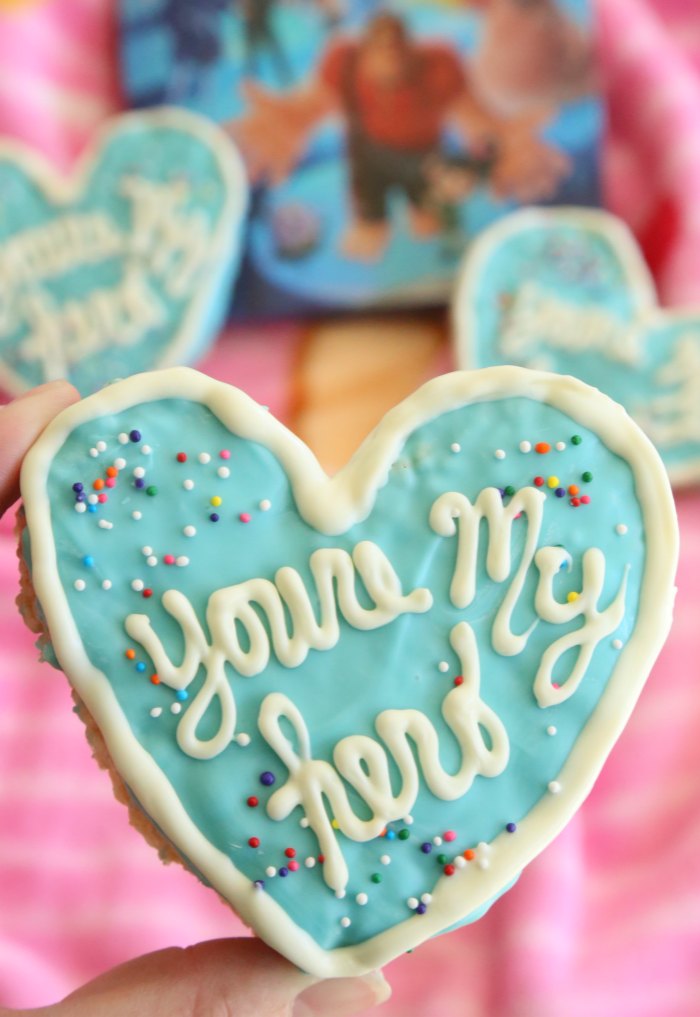 If you’ve seen Wreck-It Ralph, you know how important Ralph’s medal is. The “you’re my hero” cookie medal that Vanellope gives him is a key element to the movie– one that still plays an important role in Ralph Breaks The Internet. So, it seemed to be an obvious movie treat idea to me! I’m not a great cookie baker though (true story). Rice Krispies Treats are sooooo much easier to make (and don’t require turning on the oven). So, why not make a krispie treat version of the medal?! 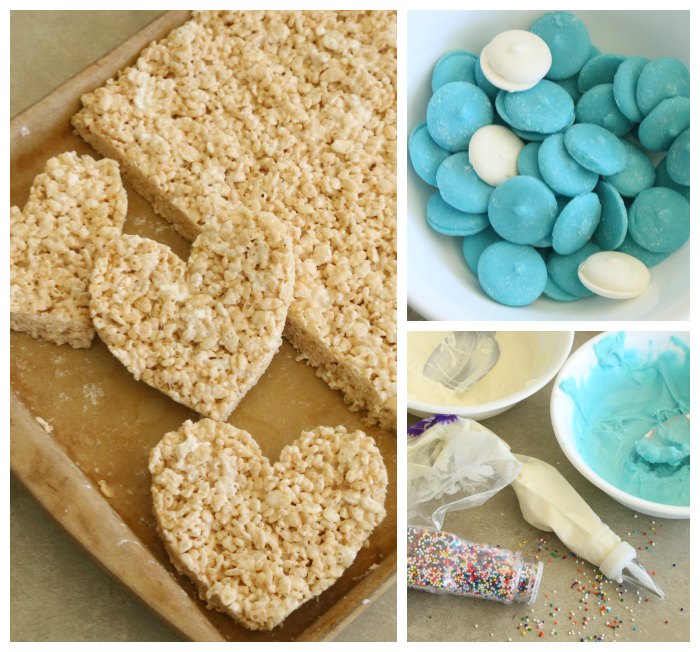 Overall, making these little Disney-inspired treats is super easy! You’ll start by making a normal batch of krispie treats with 1/4 C butter, 4 C  mini marshmallows, and 6 C puffed rice cereal. Spread them into a pan to cool. Once the mixture has cooled some (enough that everything is sticking together well) use a heart-shaped cookie cutter (or make your own heart template out of paper) to cut the hearts of the pan. I made 3 for our movie night for the kids and still had plenty of krispie treats left in the pan. Depending on the size of your hearts you could easily get 6-9 hearts from one batch. 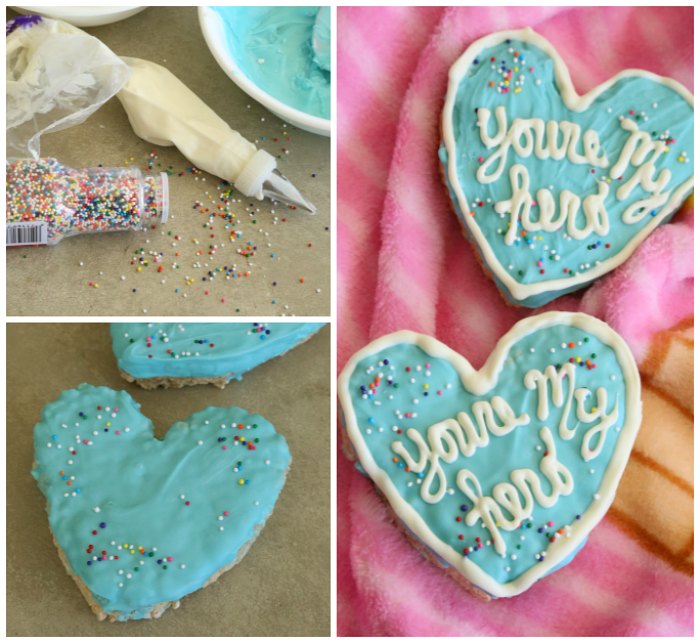 Once you have the hearts cut, you’ll need to melt some candy melts. To get the color right, I melted a the blue candy melts with just a couple of white pieces mixed in. Melt according to package directions. Once melted, dip the top of the hearts into the light blue melted candy and immediately sprinkle with the nonpareils in the pattern of Ralph’s medal (you can leave the middle mostly open for piping the words). Once you’ve done that for all the hearts, you’ll need to add the white. To do so, melt the white candy melts according to package directions (you’ll only need about 1/4 of the package for 3 hearts). Once melted, place in a piping bag with a narrow tip. Pipe white along the edge and write “youre my hero” on each treat. That piping work was the hardest part. But remember, Vanellope’s handwriting isn’t perfect (nor grammatically correct with the missing apostrophe), so it doesn’t need to be perfect. Let everything set and that’s it! Now you’ve got adorable treats to enjoy! 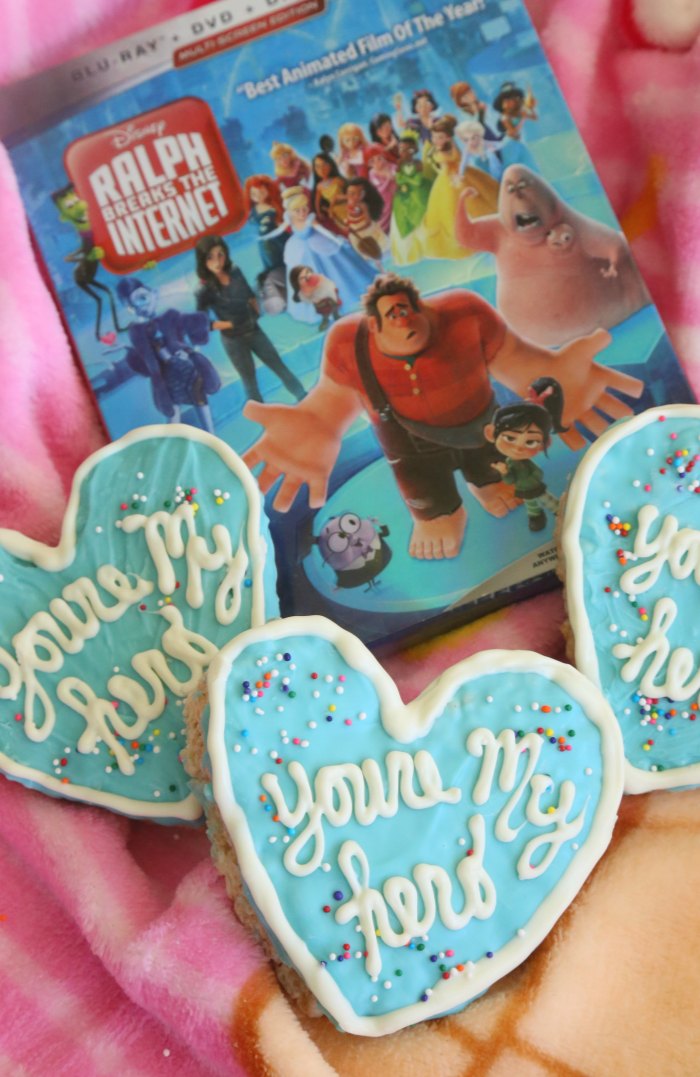 Aren’t they adorable? I love them and bet your kids will too! So, whip up a batch of these cookie medal treats and get your own copy of Ralph Breaks The Internet  TODAY! (on Blu-ray/DVD February 26, 2019). There are some GREAT bonus features on the Blu-ray that your family is sure to love. The Easter eggs are SO fun in this movie, especially because there are SO many! 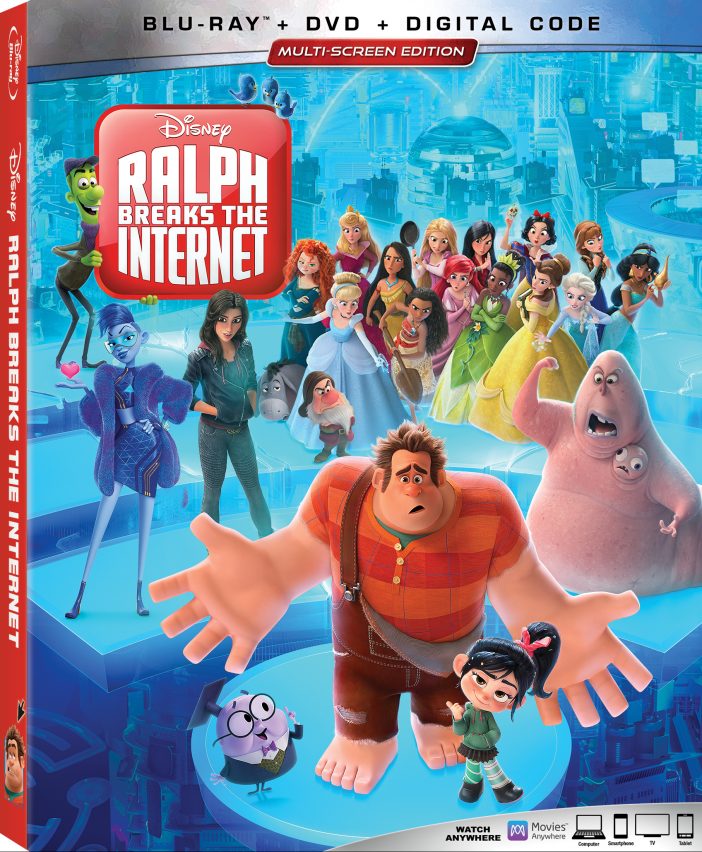 Walt Disney Animation Studios’ “Ralph Breaks the Internet,” the animated adventure featuring video-game bad guy Ralph (voice of John C. Reilly) and fellow misfit Vanellope von Schweetz (voice of Sarah Silverman), raced to No. 1 opening weekend (the second biggest Thanksgiving opening of all time), winning the top spot at the domestic box office for three consistent weeks and grossing more than $435.1 million to date. In the hilarious, highspeed sequel to 2012’s Oscar®-nominated “Wreck-It Ralph,” the besties risk it all by traveling to the expansive, fast-paced world of the internet in an action-packed attempt to save Vanellope’s game SugarRush. “Ralph Breaks the Internet” is available instantly on Digital 4K Ultra HD™/HD/SD and Movies Anywhere Feb. 12 and physically on Blu-ray and DVD Feb. 26.”

Sure to provide lots of Disney entertainment! Need even more Ralph fun for your movie night? Be sure to print out the Ralph Breaks The Internet Activity Pages!

You can also check out our Ralph Breaks the Internet Gift Guide here. And for some added fun, you can read all about how that now famous Disney princess scene came to be – those are my favorite scenes in the movie!