Layers of brownies, graham crackers, marshmallow creme, and chocolate pudding combine to make this Brownie S’mores Trifle is an insanely delicious dessert! It’s all the taste of s’mores without the campfire! 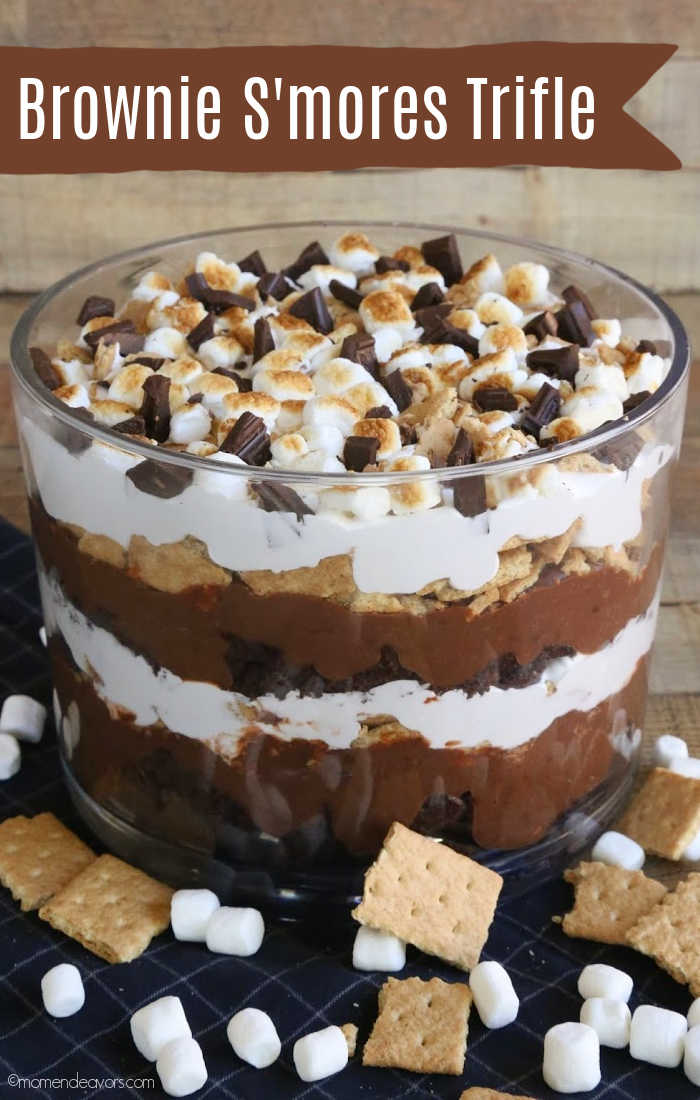 If you like s’mores, you are going to LOVE this dessert! We’ve made it for multiple gatherings with friends and we’ve never had leftovers. Everyone goes for seconds!! So beware, this s’mores trifle is dangerously delicious!

S’mores Flavors in a Dish!

Roasted marshmallows, chocolate, and graham crackers – the quintessential summer camping dessert! It’s always a favorite here and honestly we’ve been on kind of a s’mores kick lately! After making s’mores bark, I decided to concoct a trifle dessert with the s’mores flavors.

A trifle dessert usually consists of some sort of cake/sponge and fruit with creme, etc. There’s no fruit in this dish though – and brownies replace the sponge cake! The flavors are perfect though – combining all the classic s’mores ingredients and adding a few more to closer to a classic trifle! 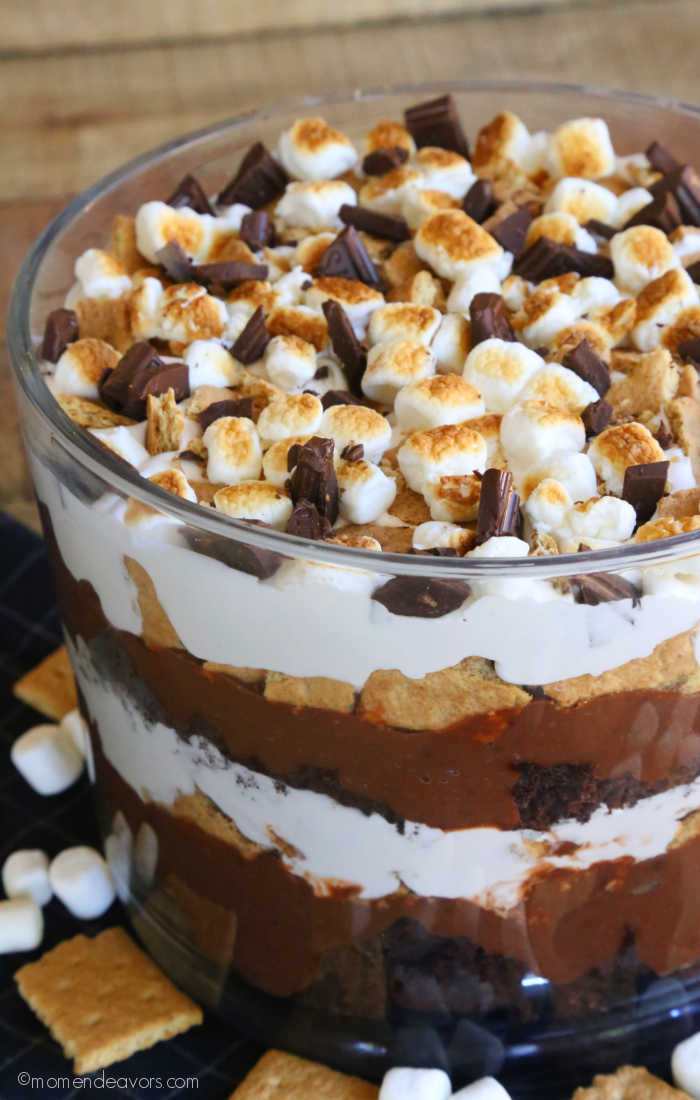 How to Make Brownie S’mores Trifle

In addition to being super delicious, this trifle dessert is  really easy to make which is always a bonus! It’s a great dessert for all kinds of occasions and great to have s’mores flavors even when no campfire is available!

You’ll start by baking up a 9×13 pan of brownies according to the package/recipe directions. Once done, allow to cool and cut up into chunks. No need to be exact with any of it! 🙂 While that bakes & cools, you can prep most of the other ingredients. Mix up the instant chocolate pudding, chop up your graham crackers, and mix up the creme! 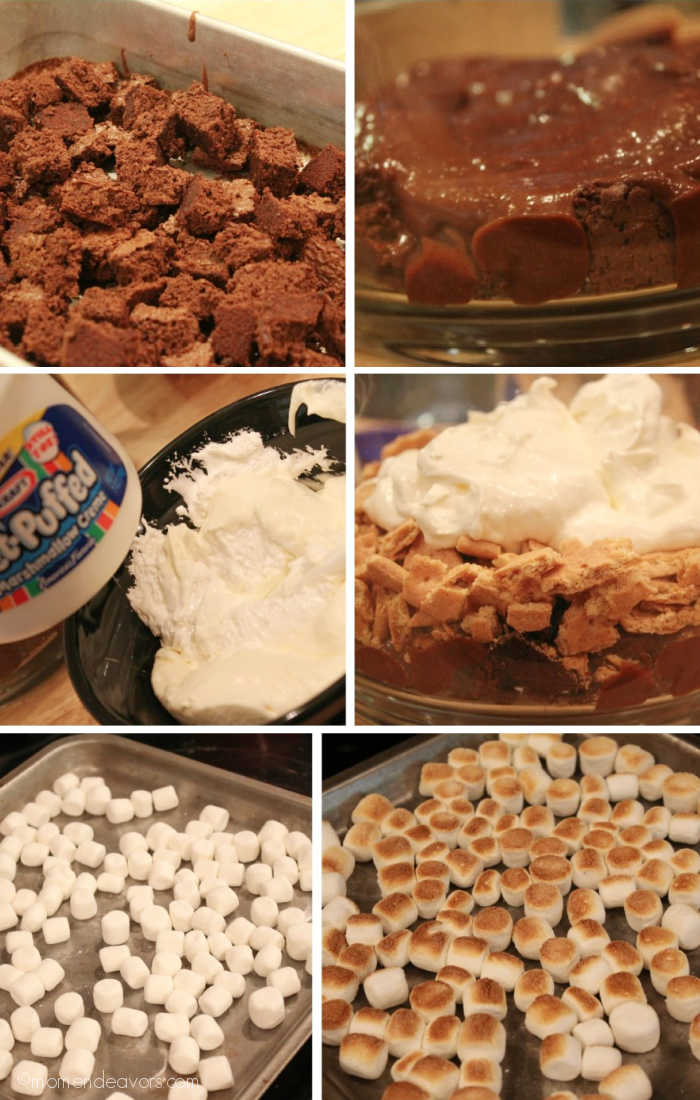 Once your brownies are ready and everything is prepped, you’ll start layering everything in the trifle dish. Here’s my order: brownie pieces, pudding, graham cracker pieces, whipped marshmallow creme layer. Repeat. 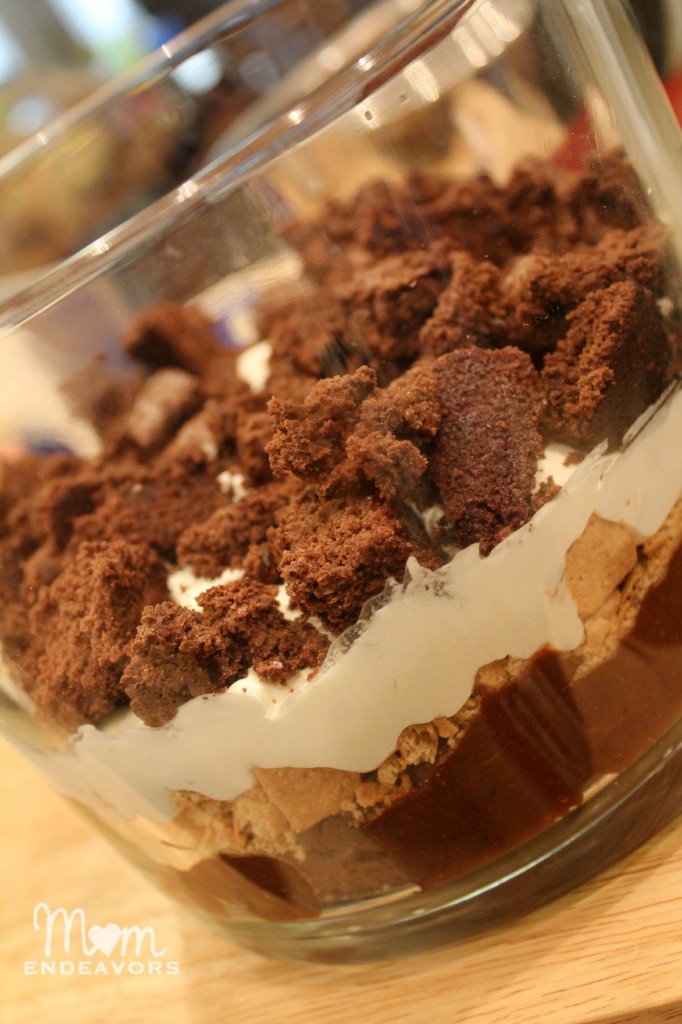 You’ll end with the 2nd half of the whipped marshmallow creme mixture. But to really make this dessert extra perfect, the top is key! And the magic is in “roasting the marshmallows. No campfire necessary though! 😉

You just need to broil them….for only a few seconds! Just put about a cup (I just grabbed two handfuls) of mini-marshmallows onto a baking sheet and put them in the oven under the broiler. You canNOT walk away…in fact, don’t even look away. I didn’t even close the oven door. I stood there watching for about 10-15 seconds. The moment they start looking a little golden, take them out. Otherwise you might have a charred, gooey mess!

Let those cool, then sprinkle them over the top of the whipped layer. For added garnish, add some crushed graham crackers and some chopped up Hershey bar! Doesn’t the top look fancy?! 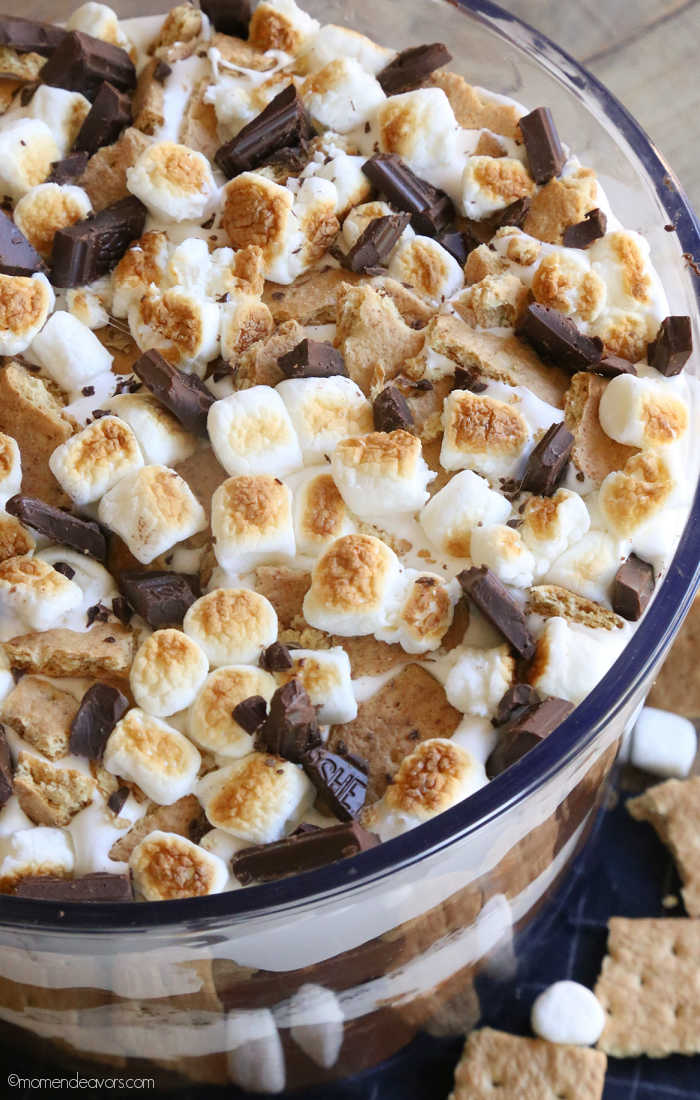 Then, just pop it in the fridge for a few hours to let all the flavors meld together a bit! Enjoy! It is sooooo yum!

Brownie layer: If you want to make this recipe truly no-bake, you pickup a batch of store-bought brownies. Or if you’re not a brownie fan, you could always do pieces of homemade or store-bought chocolate cake.

Graham crackers:  For easier and less messy breaking, you can put them in a baggie to crunch up. And for better flavor, I recommend broken pieces, not just crumbs! If you want a little extra graham cracker flavor, use an extra package!

Roasted marshmallows: This is the only part of the recipe that has the potential to be tricky. If you leave the marshmallows too long, they can end up a puffy charred mess. Also, some readers report them being too gooey to remove from the pan. I haven’t had that issue, but I almost always do mine in a toaster oven and let them cool almost completely before handling them

If you have a kitchen torch (like for making creme brulee), you could always use that. Another idea (that a reader brilliantly suggested) is to put some broken pieces of graham crackers on your pan first and put the mini-marshmallows on top. That way, they’ll be easy to remove from the pan! 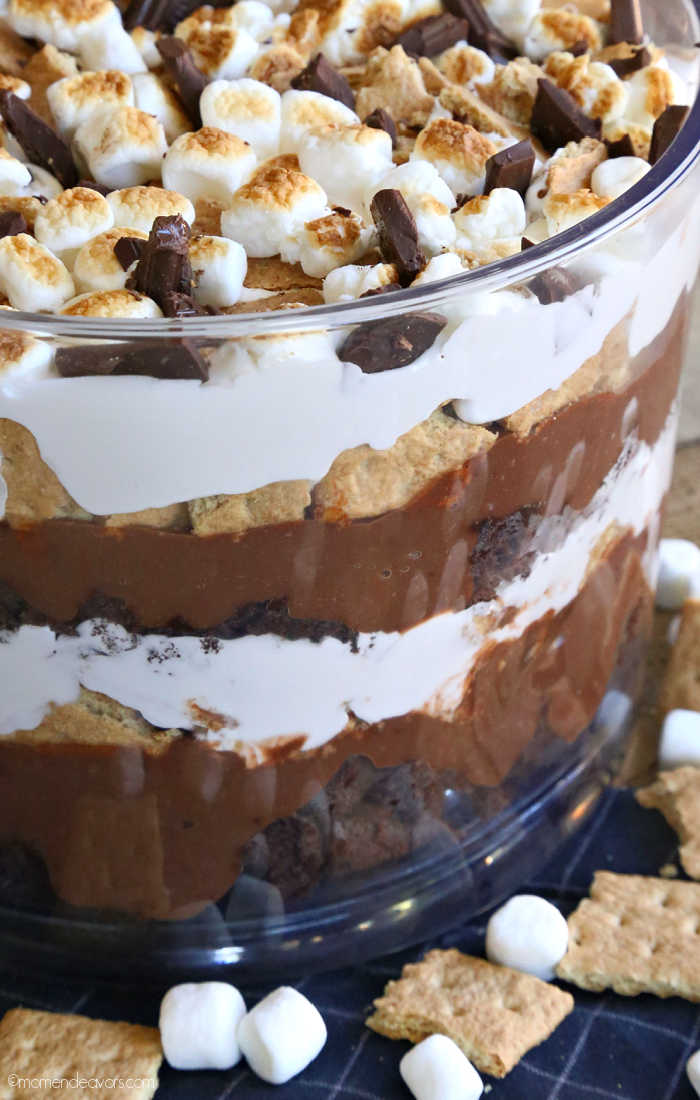 This s’mores trifle is definitely a family favorite. But if you’re looking for other fun options, be sure to check out these posts:

So many delicious s’mores ideas! 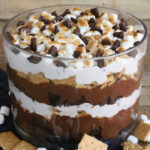 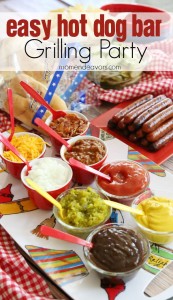 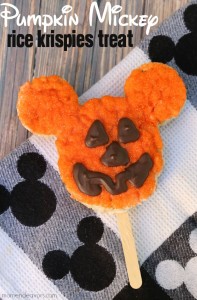 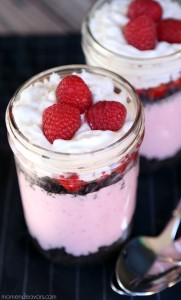 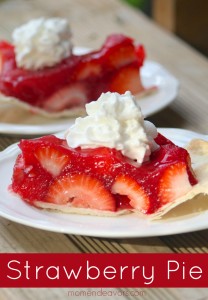