From the same group that brought us the Lord of the Rings Trilogy, comes The Hobbit: An Unexpected Journey and it opens in theaters today! Earlier this week, we got to screen the film! 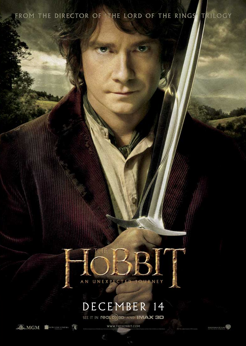 The adventure follows the journey of title character Bilbo Baggins, who is swept into an epic quest to reclaim the lost Dwarf Kingdom of Erebor from the fearsome dragon Smaug. Approached out of the blue by the wizard Gandalf the Grey, Bilbo finds himself joining a company of thirteen dwarves led by the legendary warrior, Thorin Oakenshield. Their journey will take them into the Wild; through treacherous lands swarming with Goblins and Orcs, deadly Wargs and Giant Spiders, Shapeshifters and Sorcerers.

Although their goal lies to the East and the wastelands of the Lonely Mountain first they must escape the goblin tunnels, where Bilbo meets the creature that will change his life forever…Gollum. Here, alone with Gollum, on the shores of an underground lake, the unassuming Bilbo Baggins not only discovers depths of guile and courage that surprise even him, he also gains possession of Gollum’s “precious” ring that holds unexpected and useful qualities … A simple, gold ring that is tied to the fate of all Middle-earth in ways Bilbo cannot begin to know.

So, here are our thoughts &  a few things I think you should know about the film:

1. The film is shot at 48 frames per second (a high frame rate) and was shown in 3D. It was unreal. The sharpness and clarity was incredible. Normally I find 3D movies to be too dark and sometimes blurry (or perhaps that’s just my need for glasses 😉 ). But, I didn’t experience any of that with The Hobbit. Mr. Mom Endeavors compared it almost to a video game in same places. It’s definitely a noticeable difference.

2. This is actually the first of THREE films adapting the book by J.R.R Tolkien. The second film will be The Hobbit: There and Back Again. So, it’s definitely good to know that going in! Somehow, I didn’t. Since The Hobbit is one of the shorter books, I NEVER anticipated that it wasn’t all in this one  movie. So, I was rather shocked & frustrated when the movie ended (and it clearly wasn’t the end).

3. I read the book in 6th grade and loved it. But, I haven’t read it since (and I’m now realizing that 6th grade was 20 years ago and I’m suddenly feeling really old). So, I have NO idea if the movie is a good representation of the book or not. But, there were two scenes that suddenly took me back to the book (the rock giant fight and the game of riddles with Gollum). I loved that!

4. They did a really great job (even if it might be different than the book) of tying this to the first 3 LOTR movies! From the characters to the overall feel, the music, and that breathtaking scenery, it’s all there!

5. The movie is long (like just 15 minutes shy of 3 hours long)! Which, if you’re familiar with the LOTR, that’s not surprising. But, still, this one felt a little too long. Both Mr. Mom Endeavors & I think they could have cut the length of a few different scenes and shaved off a good 15 minutes or so. But, that aside, it still was definitely entertaining and held our interest for the duration.

6. This one probably goes without saying, but I felt the need to put it here anyway. Given the content and PG-13 rating, it’s definitely not a little kid’s movie. Even though the content & overall feel is a bit lighter than the LOTR movies, it’s by NO means a kid friendly show.

Overall, the movie is definitely good and given the new high frame rate filming, it’s definitely one to see in the theaters! If you enjoyed the trilogy, I don’t think you’ll be disappointed with The Hobbit!

Will you/have you seen the film? What do you think?

Disclosure: We attended a free press screening to facilitate this review. As always, all opinions are entirely my own!