It’s been a frightfully crazy weekend! In addition to all of the Monsters fun I’ve been sharing here, we had something not so fun happen..as Little Brother broke his arm on Friday! It’s our first time dealing with a break around here, so it’s been a little stressful on this mama. But, thankfully, he was so much better today that we were able to all go see Monsters University! He loved it ( I think I liked it even better the second time!!)!! And, for some extra fun, I made these Mike & Sulley Monsters oreo pops! 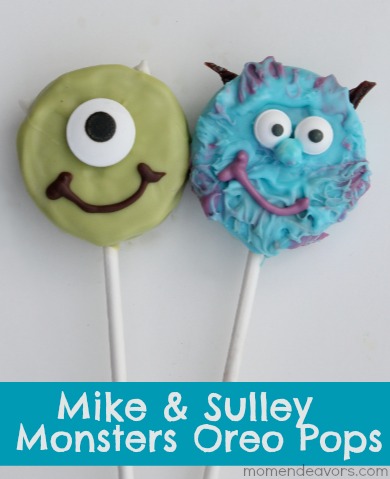 Little Brother just about screamed with delight when he saw these! Fitting for the top scaring team, don’t you think?! 😉 I had so much fun making these! To make your own Monsters oreo pops, here’s what you’ll need: 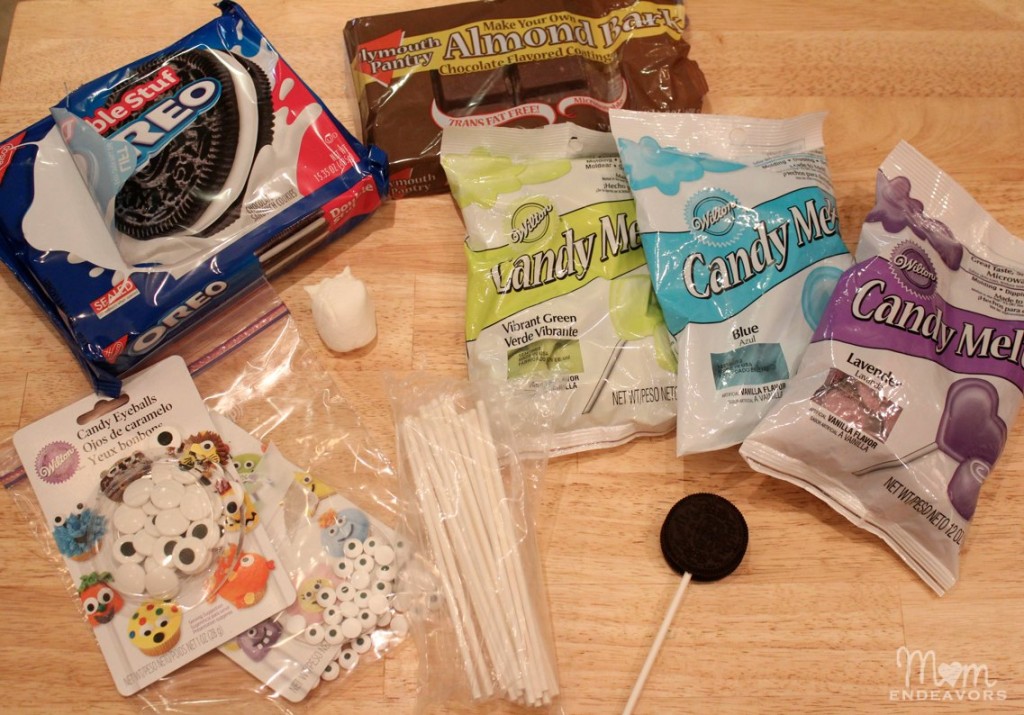 Start by plac­ing the sticks into the cream layer of the Oreos. It can help every­thing stick bet­ter if you dip the end of the stick in the choco­late first. Then, as it hard­ens, it helps hold the stick in place. If you don’t have dou­ble stuff, then flat pop­si­cle sticks def­i­nitely work bet­ter. Then, melt your choco­late/candy melts accord­ing to pack­age direc­tions. I always just put them in a bowl & use the microwave–way eas­ier that way! Coat each “oreo on a stick” with melted “chocolate” (vibrant green for Mike Wazowski and blue for Sulley). I usually sort of pour it on instead of trying to dunk them in the bowl. 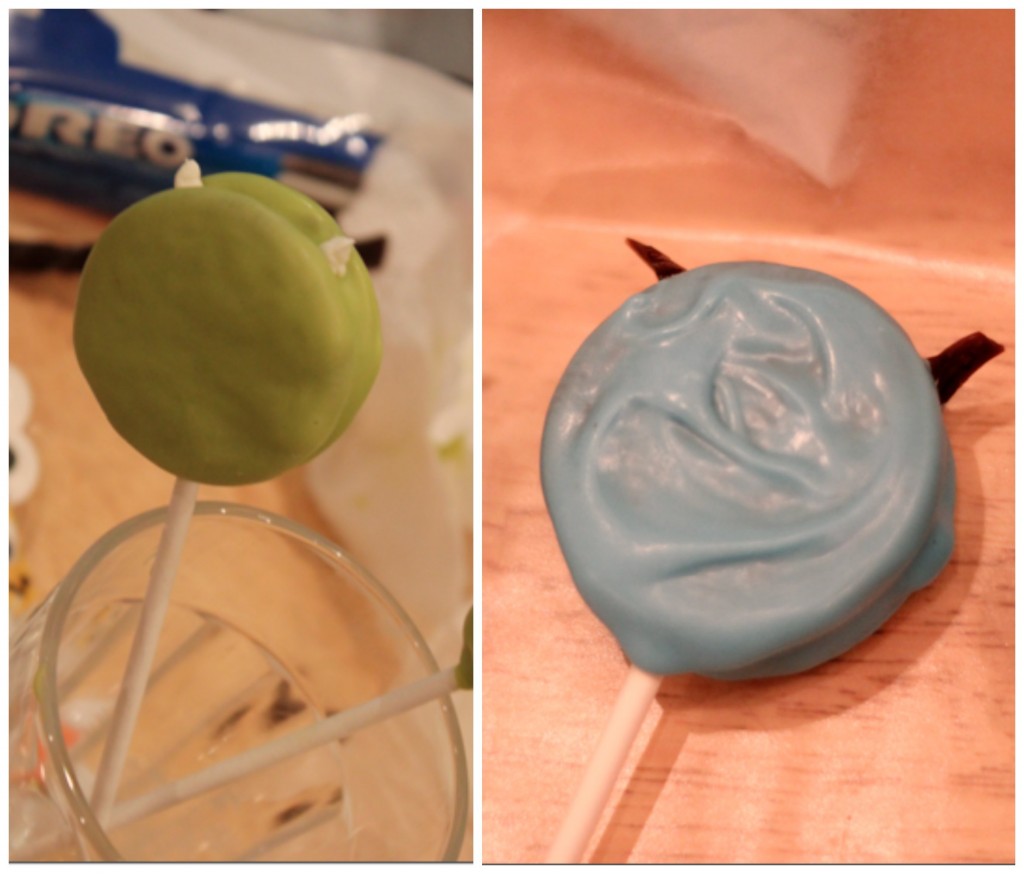 I tried to smooth down the front of the pops as much as possible for Mike, but left Sulley a little “messy”. To cool & harden, I usually just prop them up in glasses. While the “chocolate” was still melty & warm, I stuck in the horns. For Mike, I cut little, triangular-shaped sections of marshmallows. You could totally do the same for Sulley, but I happened to have some chocolate twizzlers from a previous decorating project. So, I cut little sections and used them for Sulley’s horns. Then, I put them in the fridge to harden!

While those were cooling in the fridge, I melted the lavender and chocolate. Then, I put those each into separate baggies so that I could “pipe” it on to the Oreo pops! Once hardened in the fridge, you can take out the pops to add details. For Mike, use a little dab of the melted “chocolate” to attach one large eye. Then, pipe on the chocolate for mouths! I had fun trying different “Mike” expressions! 😉 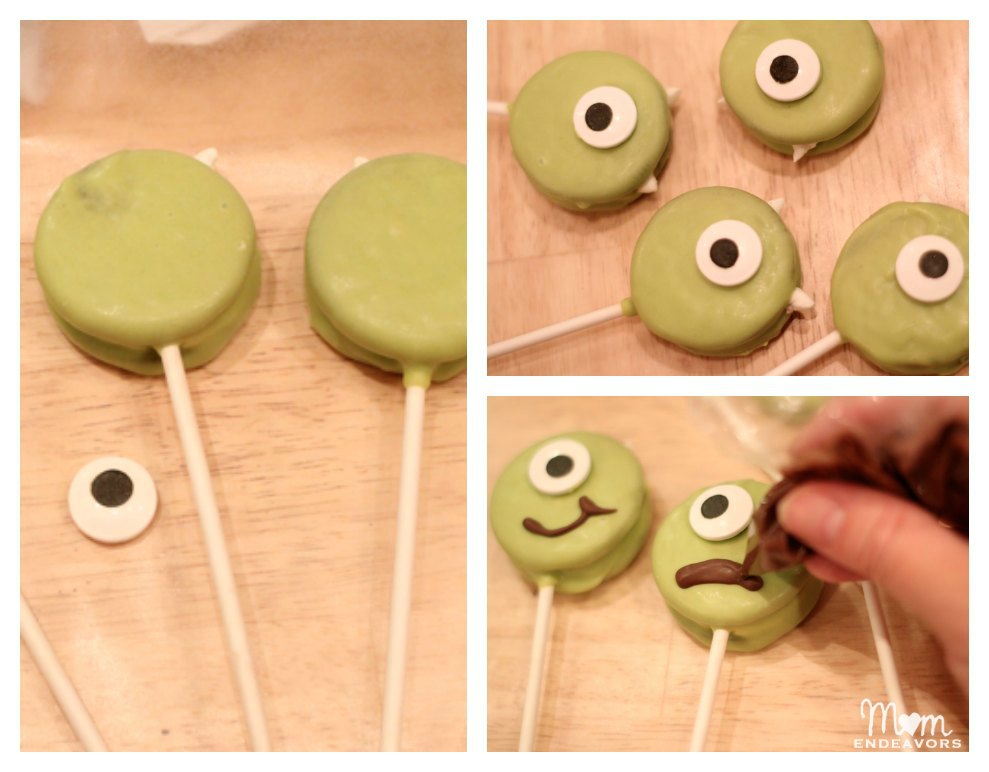 Sulley was a little more complicated. I started by adding the two smaller eyes. But, he didn’t look quite right without a nose. So, I snipped off pieces of marshmallow, covered them with the melted blue “chocolate”, and stuck on for noses. I added some extra blue above the eyes (for eyebrows), some purple spots, and a purple Sulley half-smile. Then, I decided to make them look a little “hairy” by just using the end of one of the lollipop sticks dipped in a now slightly less “melty” blue and smeared it around a bit. 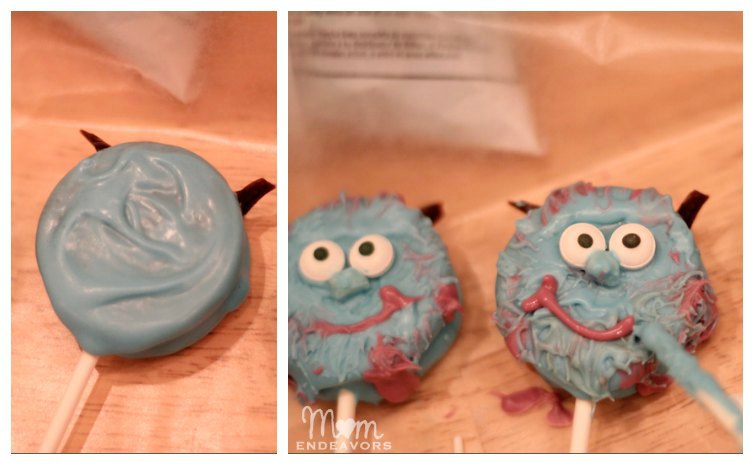 Not an exact replicable, but I think they were still pretty cute…I mean scary! 😉 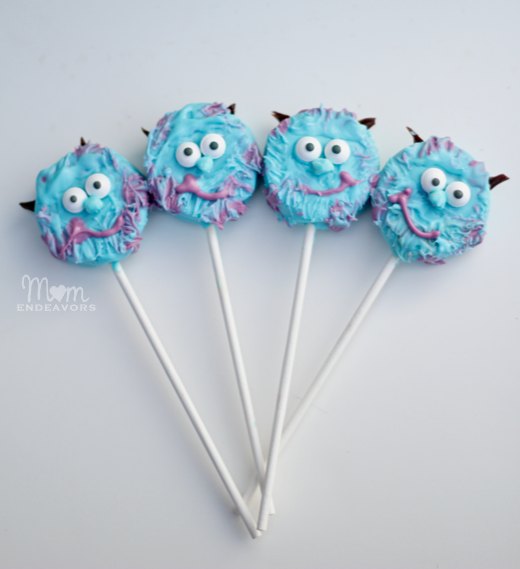 These are sure to be a hit with the kids and perfect for a Monsters-themed party! Perfect for a frightfully good time! 😉 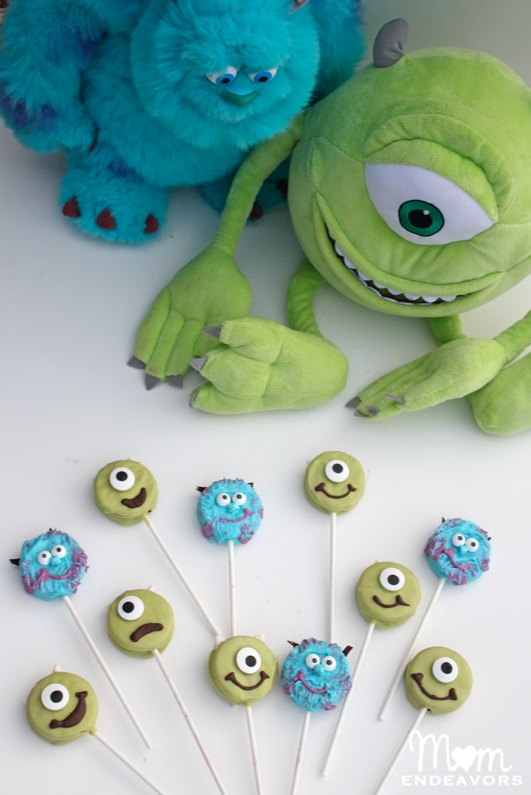 So, who is YOUR favorite… Mike or Sulley? 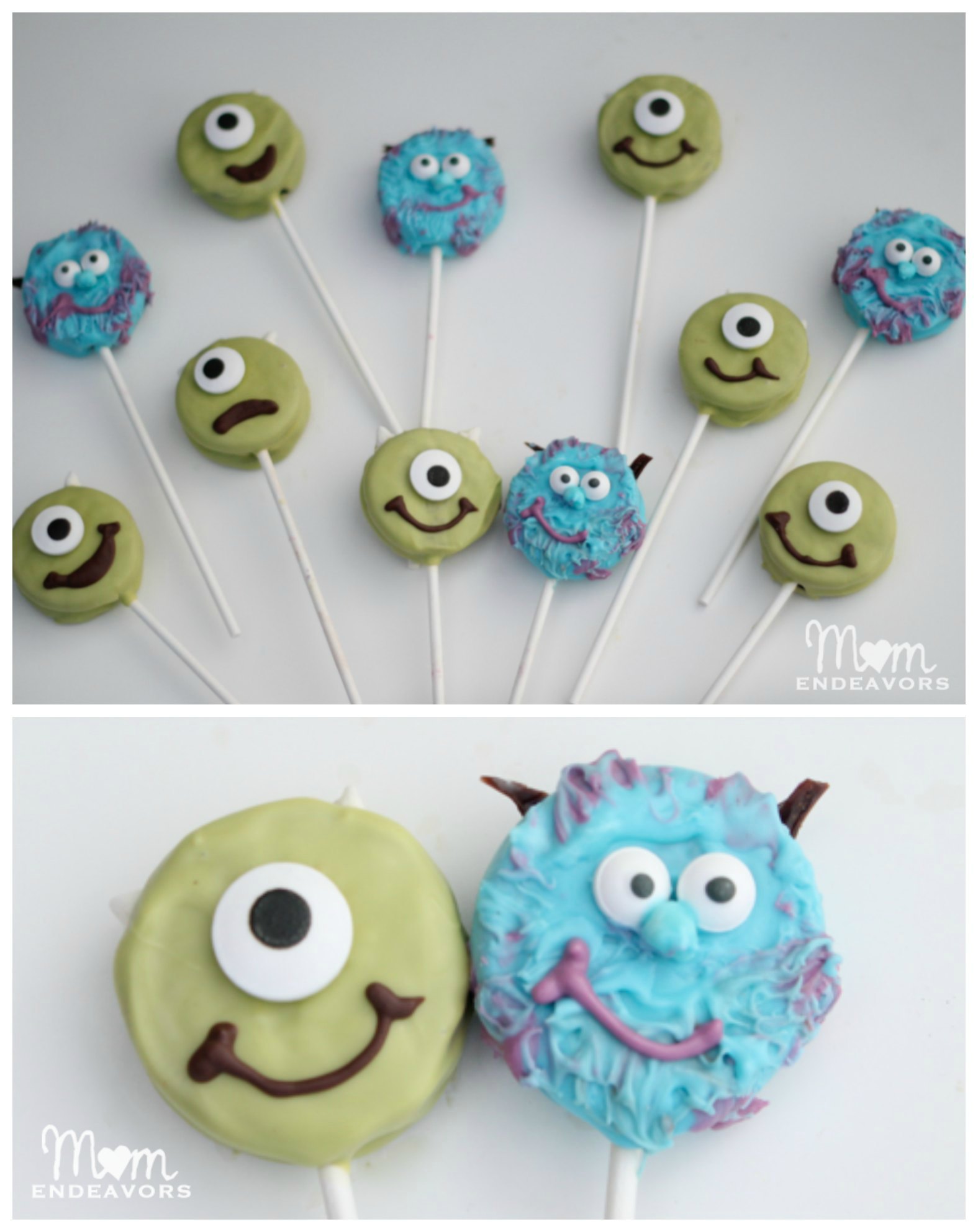 For more Mon­sters fun, you can check out the fol­low­ing posts:

Linked to: *Skip to My Lou