Have you heard of the North Pole Experience? Did you know that there is a magic portal just a couple of hours north of Phoenix (in Flagstaff, Arizona) that transports you to the North Pole and Santa’s very own workshop?! How fun is that?! My family was invited to attend last weekend so I could bring you a review of our experience…

About the North Pole Experience:

For over 400 years, Santa’s most guarded secret has been to use magic portal to travel around the world to deliver children toys on Christmas Day. He decided to share his most secret and most, guarded location nestled deep in the Flagstaff forest, the North Pole Experience.

…begins at the Little America Hotel in Flagstaff, Arizona. As soon as you drive on to the property, you’re immersed in all things Christmas. Trees in the parking lot are decked out in lights and then the lobby is really gorgeous. You need to arrive at least 30 minutes prior to your departure time in order to get checked in. Then, you can spend time checking out all the beautiful Christmas decor. This really helped to set the tone before even arriving at the North Pole! The trees are great family photo-op spots! 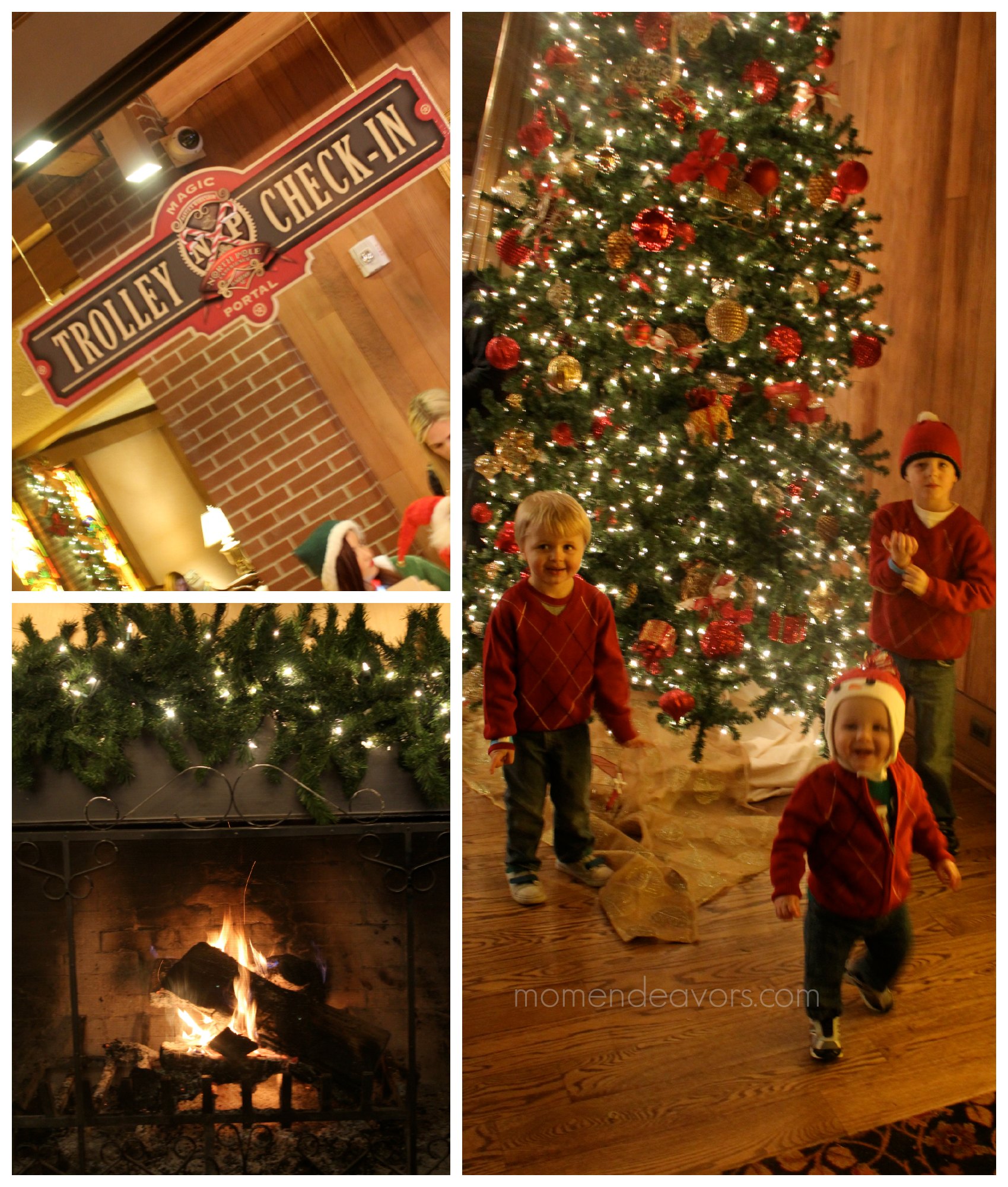 You then board your Candy Cane Express trolley (driven and guided by elves of course) for your trip to the North Pole. The whole ride only lasted about 10 minutes and as we approached the portal, we all said the “portal poem” and closed our eyes to get us through. There were flashing lights and lots of excitement….and then we arrived at the North Pole! 😉 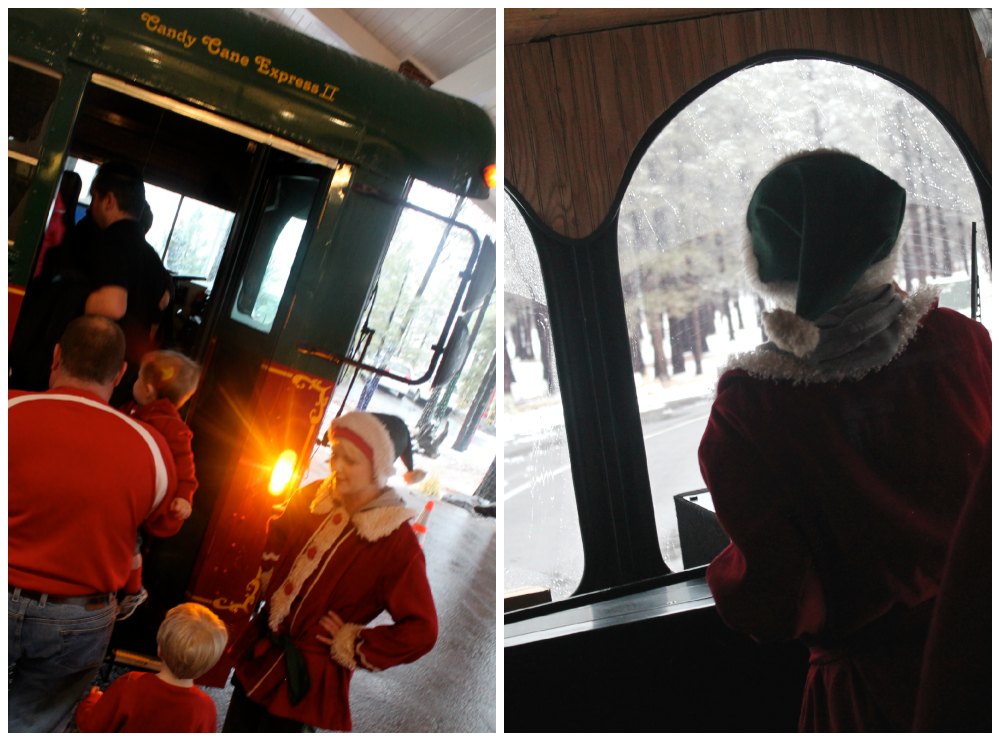 After arriving at the North Pole, the kids were invited to join our elf guide at the gorgeous wooden doors in order to enter Santa’s grand workshop. After building all kinds of excitement, the kids all got to help knock. Once the doors opened, they were greeted by elves who led everyone in to Santa’s Toy Hall of Fame. Big Brother was just absolutely beyond excited!! 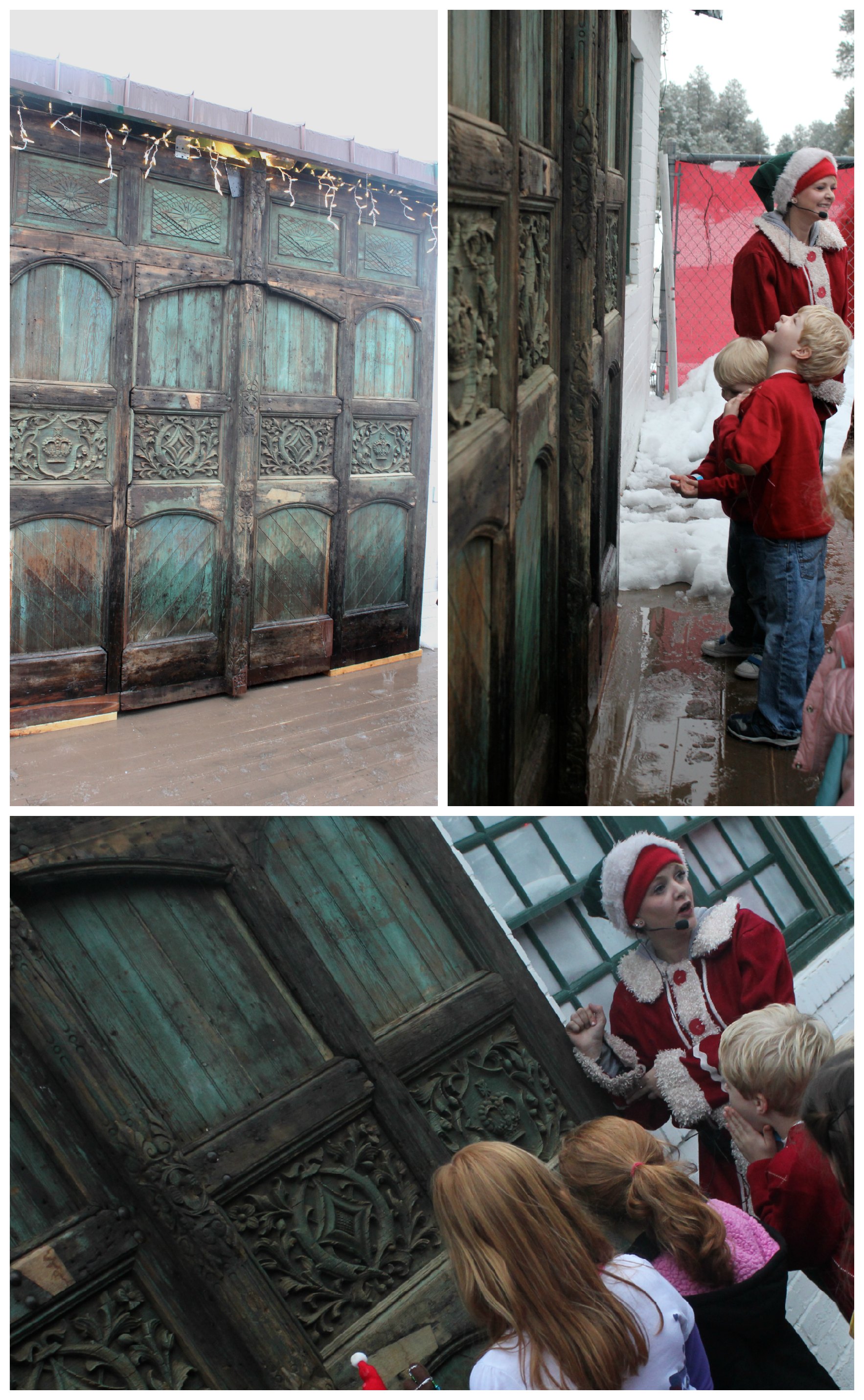 Once inside, everyone had a chance to browse the fun collection of toys in the Hall of Fame. There were some oldies, but goodies in there! Then, Alibaster (Santa’s Head Elf) led us into Santa’s original workshop. His 400 year old place certainly was much simpler than his modern space. While there, Alibaster was able to show us that we were indeed in the North Pole with a giant spinning compass! 😉 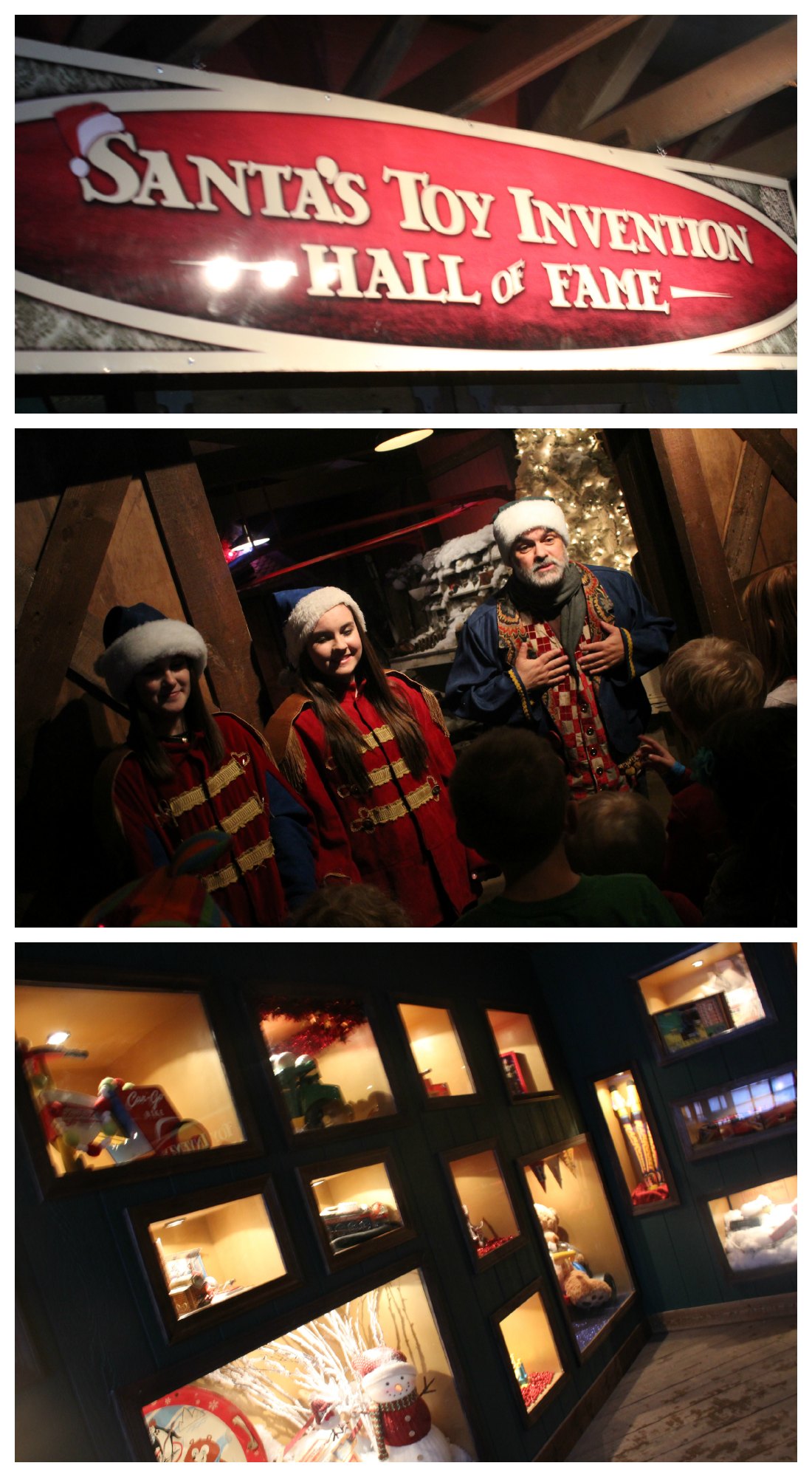 Next up, the boys had the honor of working with an elf to help make toys for other good little girls and boys! They helped make teddy bears and a fun blaster rocket thing (that they got to try out). They absolutely loved this part! And, I was quite impressed with the individualized attention the kids got. It really seemed like each family of kids had their own elf to work side-by-side with! So, that was a really fun touch! 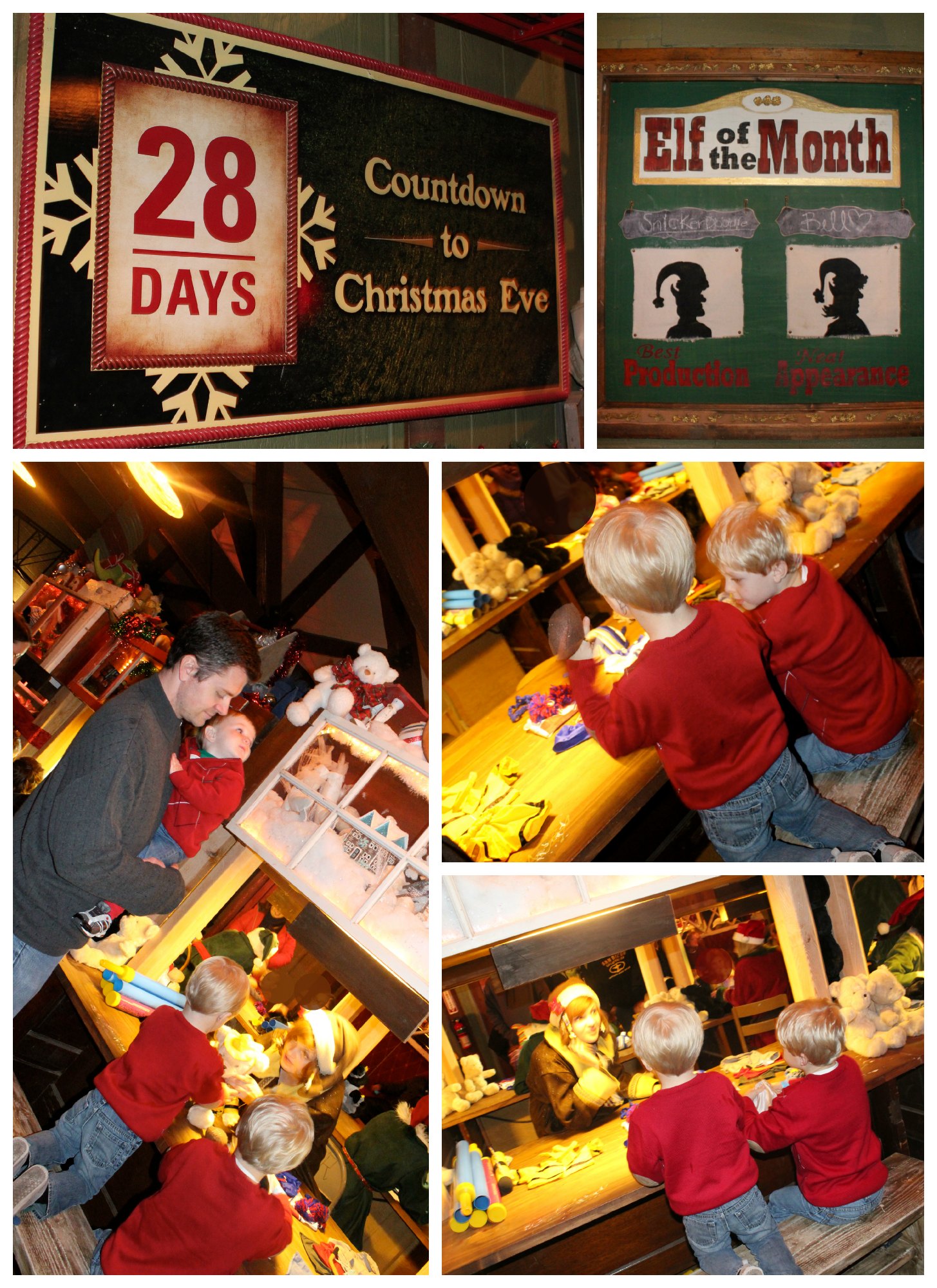 Once toys are made, they need to be wrapped of course! So, we got to head into the main factory floor & wrapping room. WOW! The details in here were great – presents everywhere, slides to transport the toys, giant spools of Christmas ribbon. Loved this! 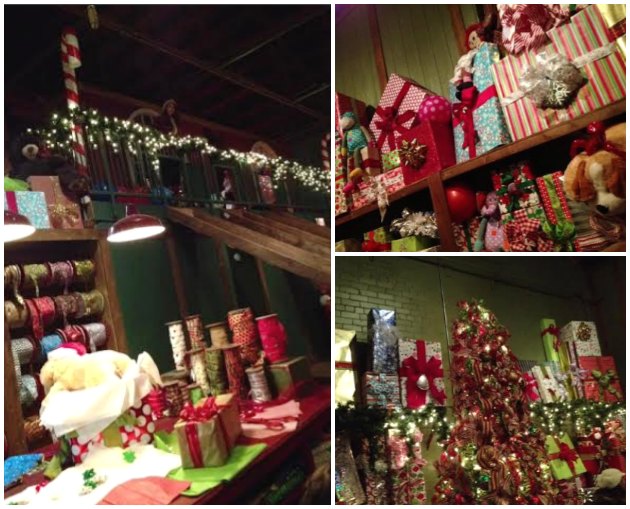 The boys’ favorite part (other than meeting Santa) came next…Sant’as bakery!!! Mmmm! The kids all gathered around Santa’s HUGE table, where they were served up cookies and snowman soup (hot chocolate). Then, the elves led us in a round of Christmas carols! Tasty & fun! 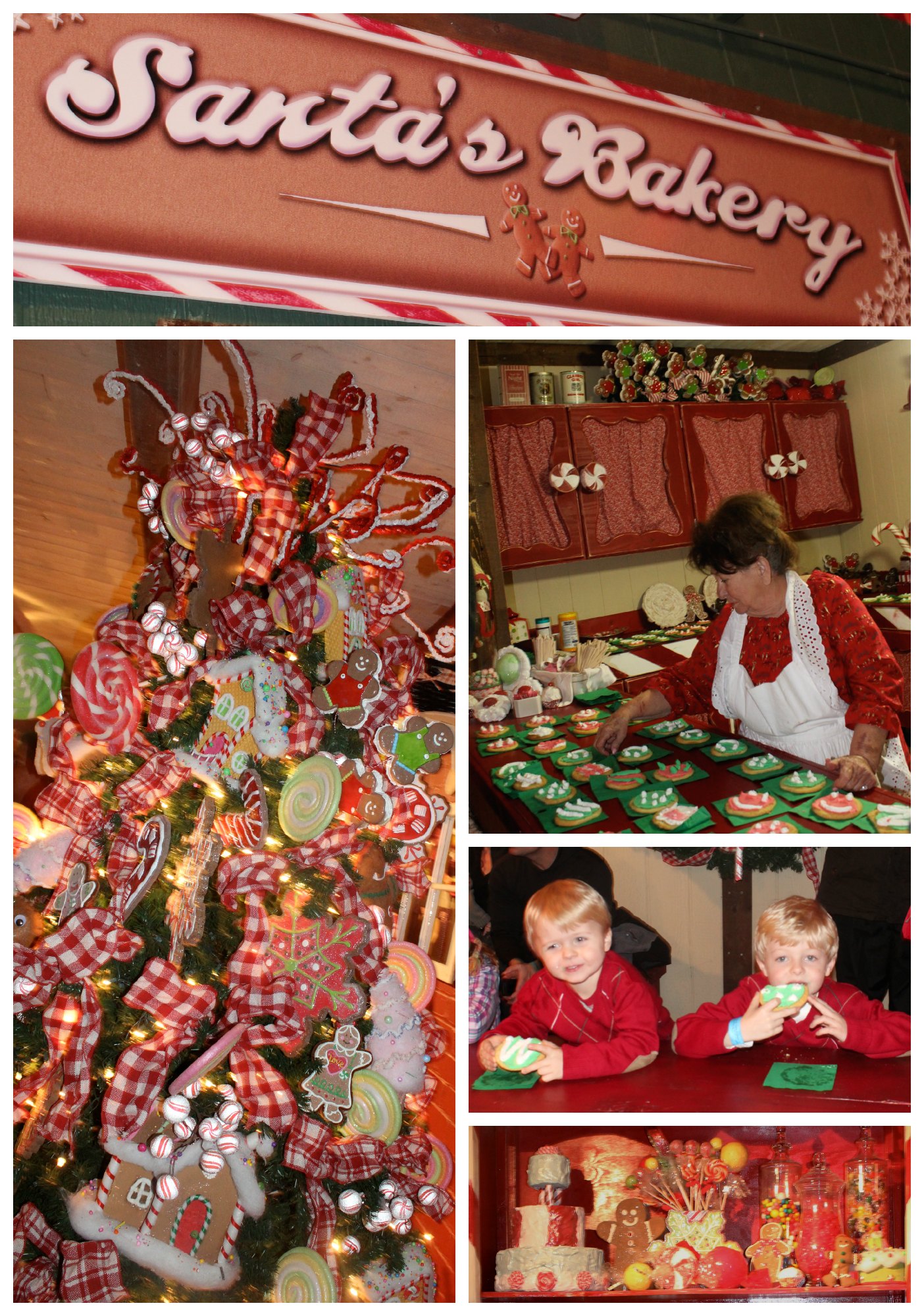 After our cookie break, we headed into Elf University (E.U.). This was my least favorite part of the experience, mainly because of the lack of space in there. There wasn’t room for many of the parents to sit down and there were some crying little ones (upset about having to be done with cookies), which made it hard to hear the elves. So, it would have been nice if that room was just a bit bigger. But, it was still a cute idea and many of the kids were actually very engaged. 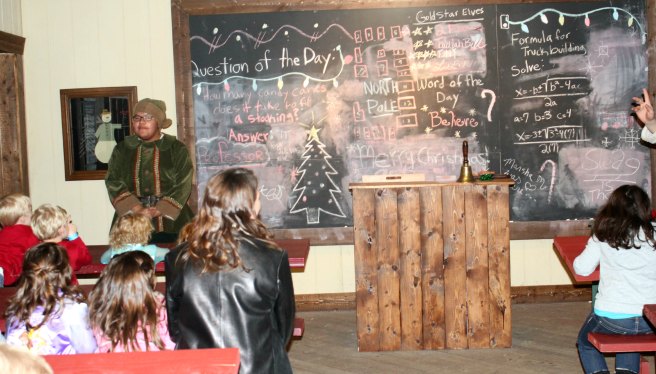 Next up was a stop to Santa’s office and mailroom. The kids all got to write letters to Santa. If they had already written their letters to Santa for the year, the were encouraged to draw him a picture! 🙂 Big Brother was SO into writing his letter this year. It was SO cute and the mailroom was quite impressive! SOooo many bags of North Pole mail! 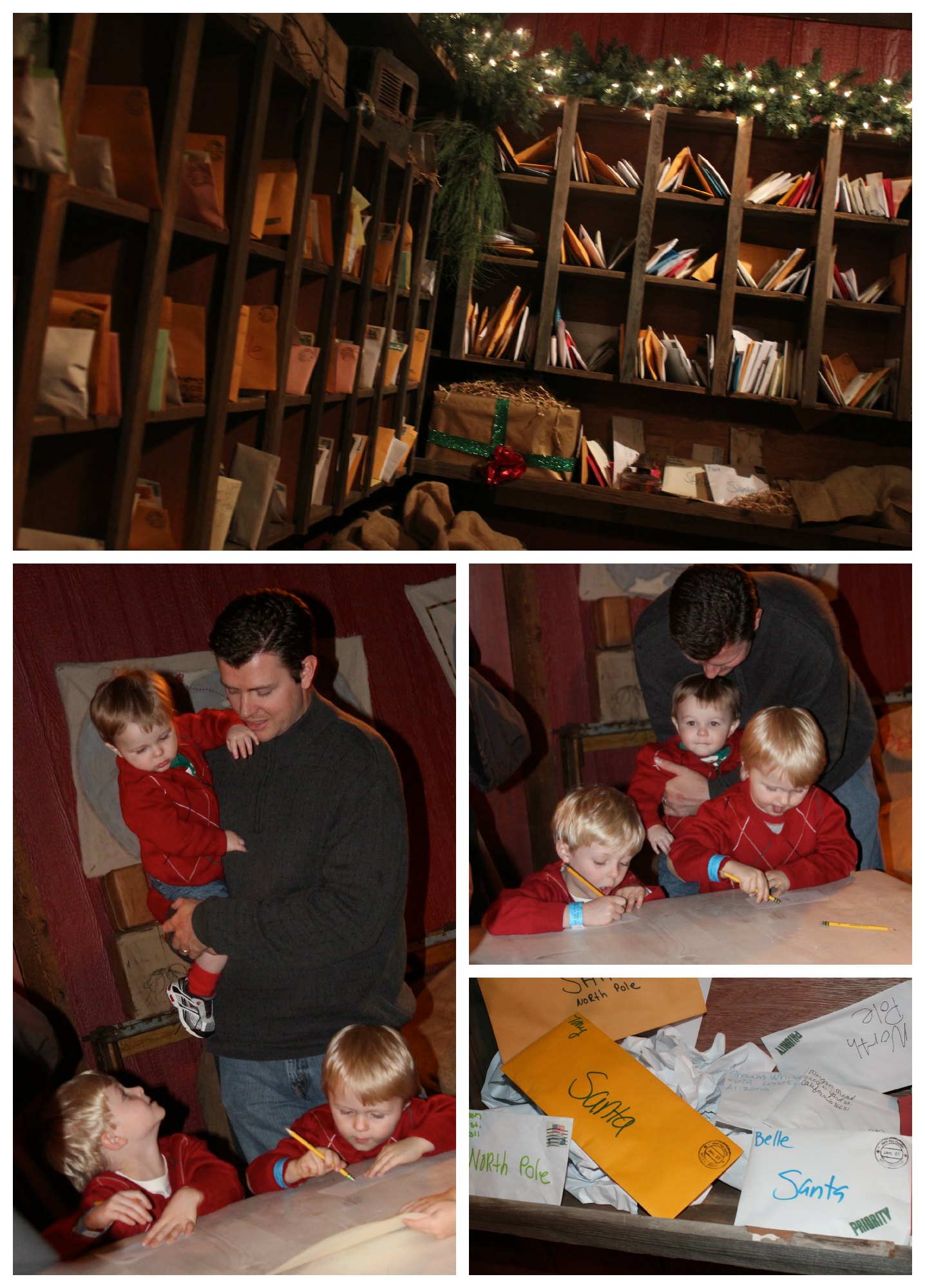 The kids then got to have a quick visit with Mrs. Claus (I thought that part should have been just a touch longer) and then we all headed into to see Santa’s top-secret “Area 47″ Sleigh Hanger, featuring his famous sleigh. An elf actually offered to take each family’s photo in the sleigh while waiting to go in to see the big man himself. Although I thought the Mrs. Claus part was rushed, I was so pleased to see that our time with Santa did not feel overly hurried. The boys each got to give Santa their letters and talk to him about what they wanted. Little Brother even got to give his beard a tug. During that time, I was able to take as many photos as I wanted and then the elves took a nice family photo on their own North Pole equipment. 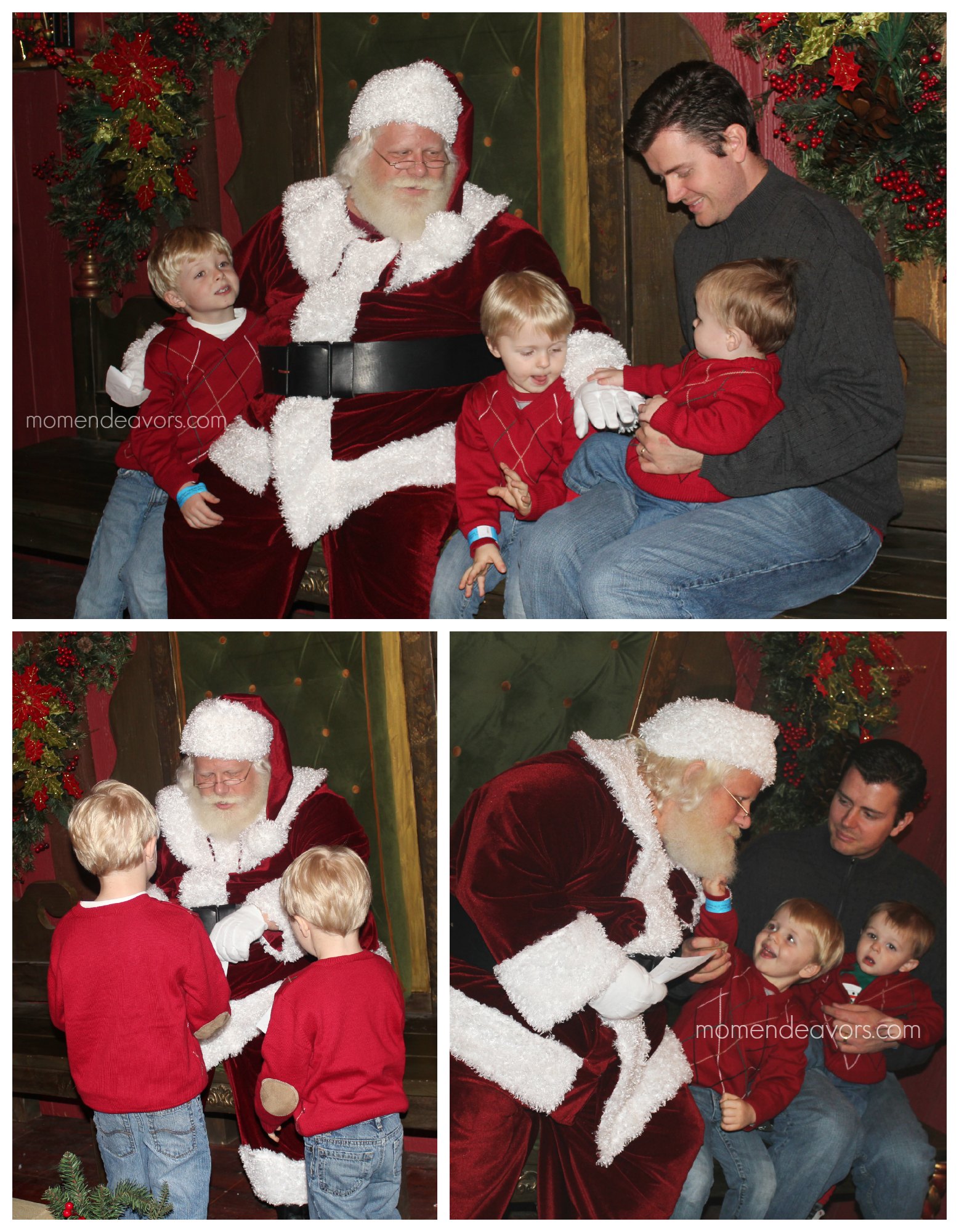 Admittedly, I was a little nervous about how our family photo would turn out. But, I’m pleased to say the elves did a great job! If we could have gotten a smile out of Baby Brother, it would have been perfect. But, as is, I’d say it turned out pretty cute. They then give you a flash drive with your picture with Santa saved right on there – SO nice! Much better than a printed photo to have to keep safe! 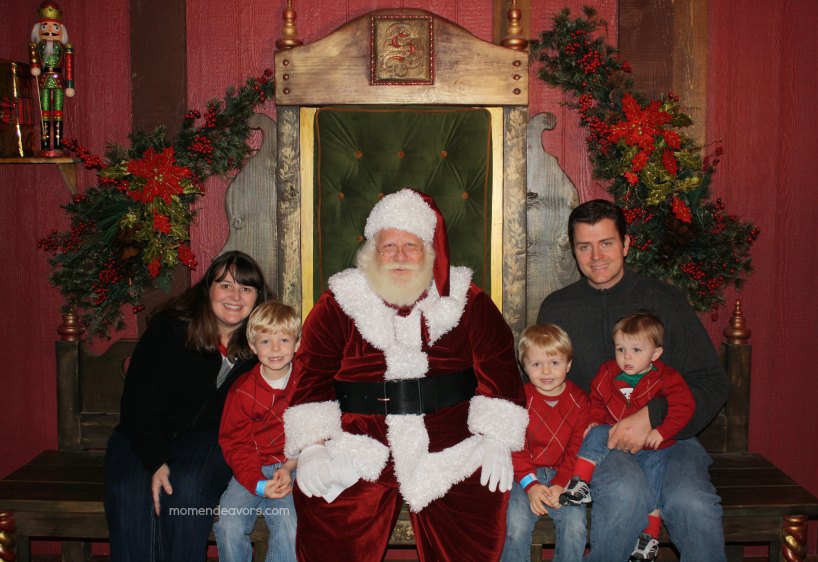 After our turn with Santa ended, we headed outside to wait for our trolley ride back through the portal to Flagstaff. There was a nice, big fire that we enjoyed before getting back on the trolley. On the ride back (after shutting our eyes again and saying our chant), we sang some Christmas carols. Everyone got a peppermint stick as we got off the trolley and the kids each got a North Pole Experience Golden Ticket to help remember the experience! 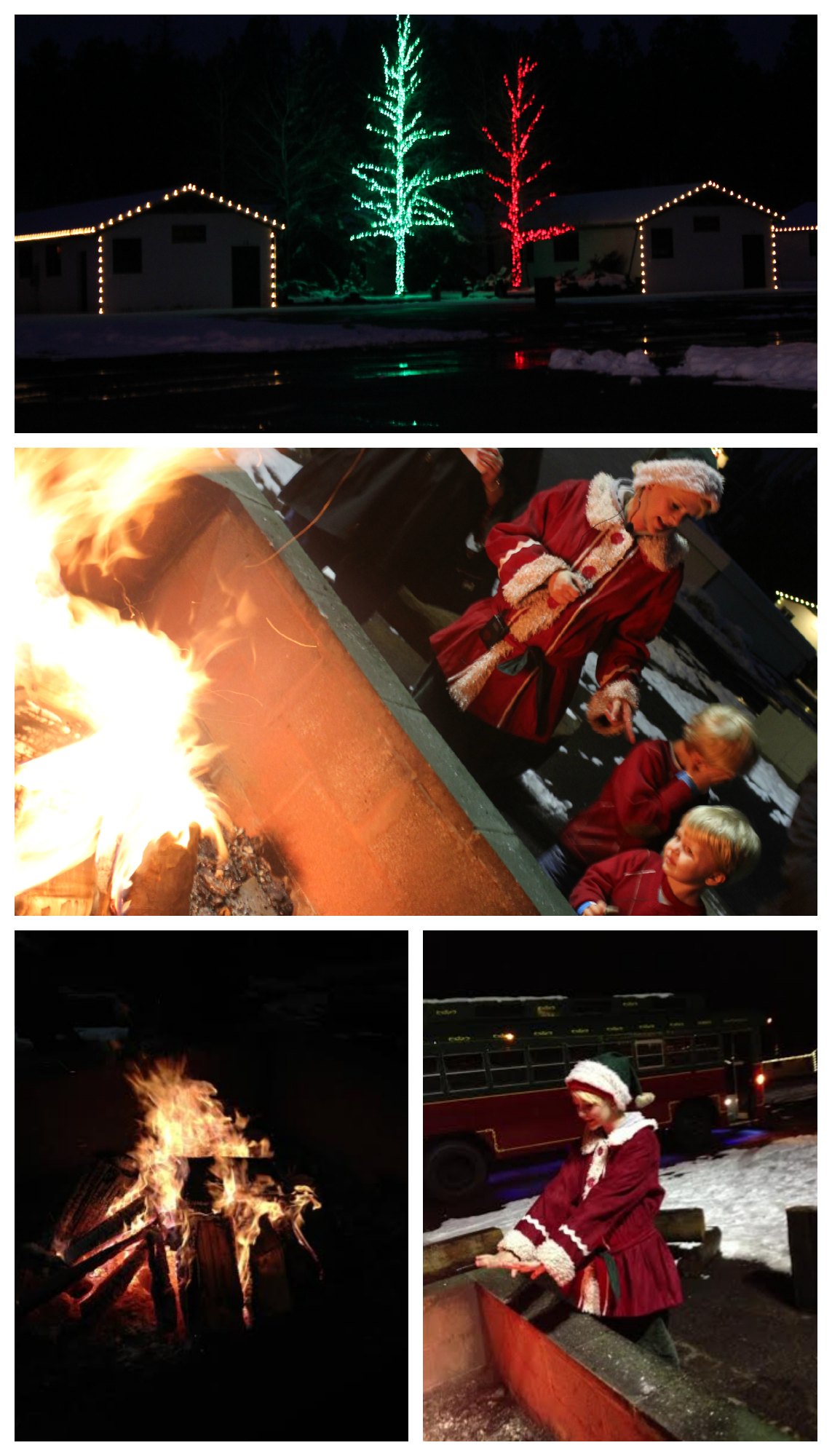 The boys absolutely loved this – especially Big Brother! From the time we arrived at the Little America Hotel to check-in until the time we loaded up the car to leave was about 2.5 hours exactly. We did it as a day trip up to Flagstaff and back. But, staying the night at one of the affiliated hotels would certainly add to the experience! We got lucky and it snowed while we were there. Plus, there was some snow on the ground. I’m not sure what the explanation would be for older kids if there is no snow on the ground!

At $42+ per ticket, this is by no means an inexpensive family activity. But, it definitely is an immersive and interactive experience! I do wish that maybe each group had just 1 or 2 less families (as a couple of times it felt a bit crowded). However, overall, I think it really was well done and something quite special & unique to do during the holiday season. Babies under 18 months are free. And, while Little Brother (who is 3) did have a good time, I think the absolute perfect age range for the experience is really probably about 4-7 years or so. Big Brother (age 6) was just absolutely beside himself with excitement. And, in watching the other families there, I would say that for the most part, that held true on ages. But, certainly, no matter what the ages in your family, I think everyone would really enjoy a special trip to Flagstaff and then a magical journey to the North Pole!

For more information or to purchase tickets, visit the North Pole Experience website.  You can also follow NPX on facebook for updates, giveaways, fun photos, and even last minute openings (they are selling out fast for the 2013 season)!

Have YOU been to the North Pole? What did/do you think your kids would like best?

Disclosure: My family received experience tickets for the purposes of this review. All opinions, experiences, and photos (except the one the elves took) are entirely my own. 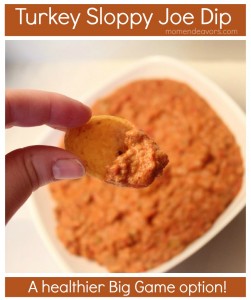 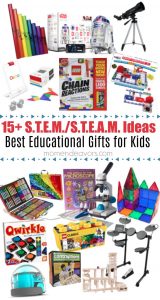