I’m always on the look-out for unique and different toys for my boys! In this digital age, it’s SO easy to get sucked in to hours spent on hand-held devices or mindless video games. Let’s face it, technology is COOL and video games can be super fun! But, I don’t want that for them all the time. I want them to actually PLAY – using their imagination, running around, being active! So, what if there was a toy that combined classic imaginative play with some super awesome interactive technology? Sounds intriguing and something kids would love, right?! Well, here is now such a toy and it’s absolutely amazing! Disney’s Playmation is truly unlike anything we’ve ever seen before and I think it’s going to be one of THE hottest new toys this holiday season! 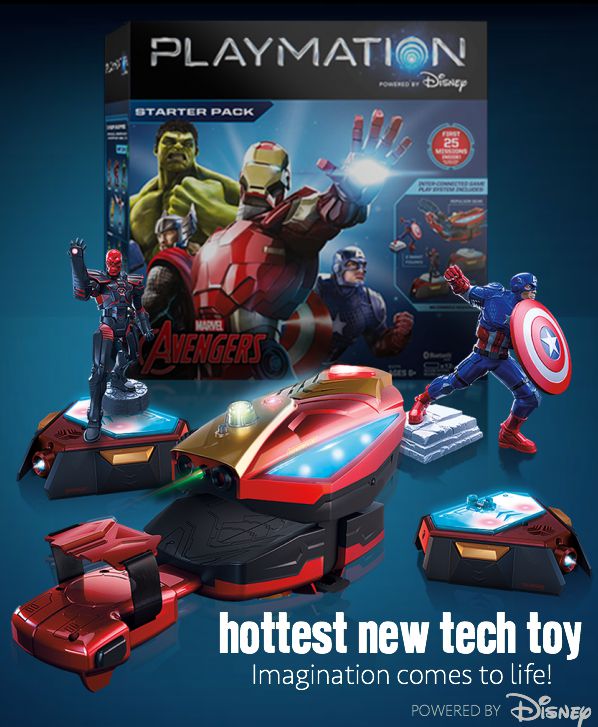 Before seeing Playmation in action at the #D23Expo, I’ll admit that I wasn’t too sure about how it all worked! But after seeing it in action, I can tell you it’s incredible! My boys are going to lose their minds over this cool new way to play (especially when the Star Wars edition comes out in 2016)!! Here’s a look at how it all works:

Cool, right?! And what you might not get a sense for in the video is that kids actually HAVE to act out the actions in order to progress in the game – that may mean hiding out of range of the power activator, running across the room, jumping, etc. We got to watch a young girl give us a live demonstration of how everything worked in a mock bedroom and she was all over the place – diving behind a bean bag to take cover, running from one side of the room to the other, etc. Amazing!

To get kids started, the gear comes with 25 original missions already loaded. Then, as kids play they are able to earn points, level up, and unlock new special abilities!

This will make the PERFECT gift for kids this holiday season and I think it’s going to be one VERY hot toy! So, I recommend pre-ordering your Playmation Repulsor Gear Starter Pack NOW (<–click affiliate link to order)! The starter kit retails for $119.99 and includes all the pieces shown in the first image! Playmation will hit stores in October, with a second wave of toys for the game coming in November! In fact, we learned at the #D23Expo that a second repulsor fear starter pack will be available before Christmas called “Gamma Gear”!

So, needless to say, Playmation is going to be a hot product, providing hours of interactive play. This year it’s all about the Avengers, but stay tuned for more fun from Disney’s Playmation as they plan to launch a Star Wars version in 2016 (we can’t wait for that) and a Frozen version in 2017!!!  To stay up-to-date on all the exciting info be sure to follow Playmation on Facebook or on Twitter @playmation.

What do you think about Playmation? Would this be a hit at YOUR house?

Disclosure: I the D23 Expo at the invitation of Disney for the purposes of this coverage. However all opinions, experiences, and love of Disney are entirely my own.