We’ve been having some much needed fun playing with our new Disney Planes toys this weekend, so much so that we even built our very own play runway! So fun! 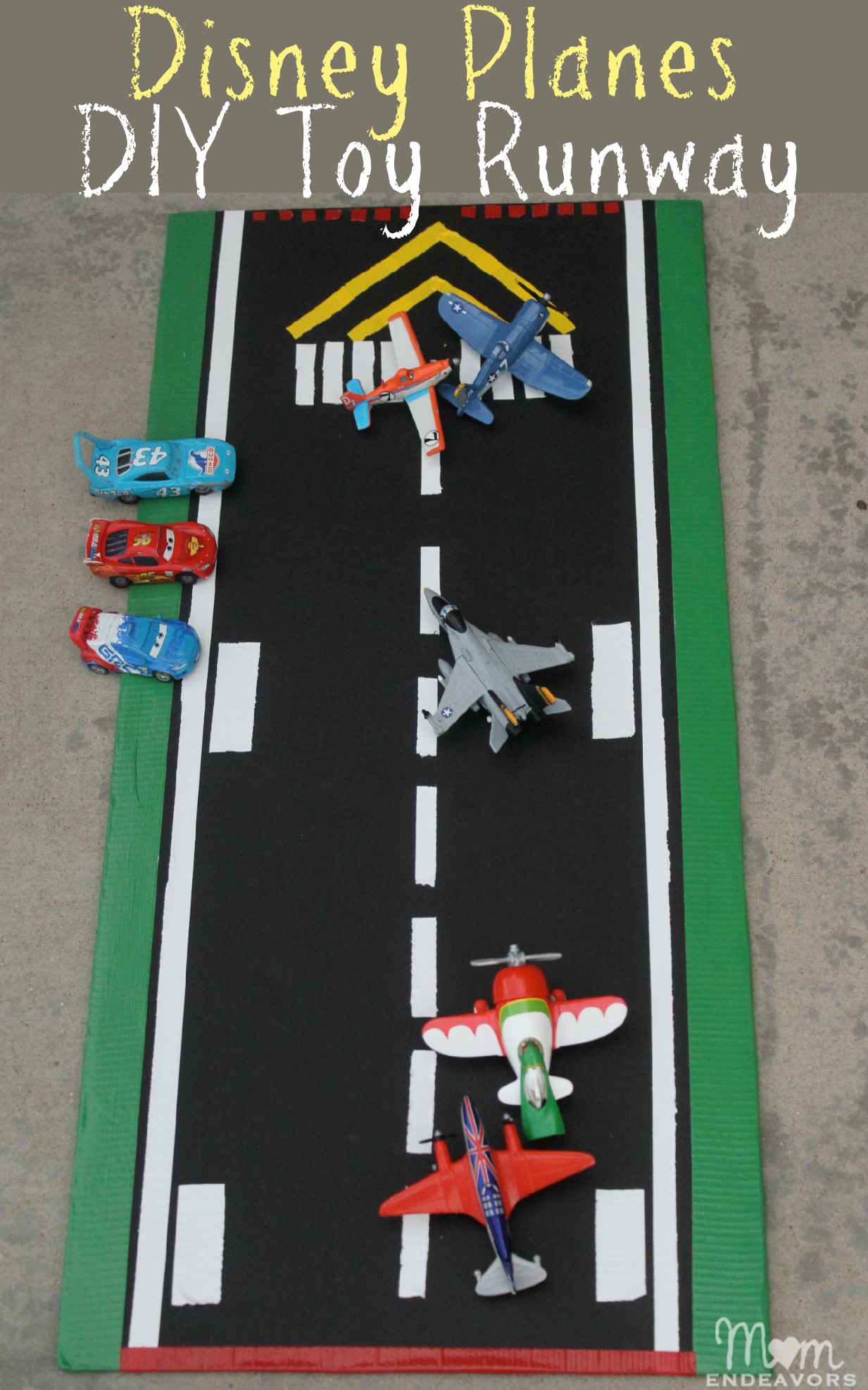 If you’ve been following the blog, then you know that last week was one of the most stressful times for us ever. Baby Brother was in the hospital for what turned out to be a very serious skin infection. And, even before we landed in the hospital, we had been busy with numerous Dr.’s appointments and dentist appointments over the week or two prior. The big boys had done such a good job with all the appointments. So, after a big dentist appointment for them (which turned out to be just a few hours before we ended up in the hospital), I took the boys to pick out some fun Disney Planes toys! We loved the movie and they were so excited to pick out some toys to go with their Disney Pixar Cars toys! (Notice their shirts?! 😉 These boys love the #WorldofCars) 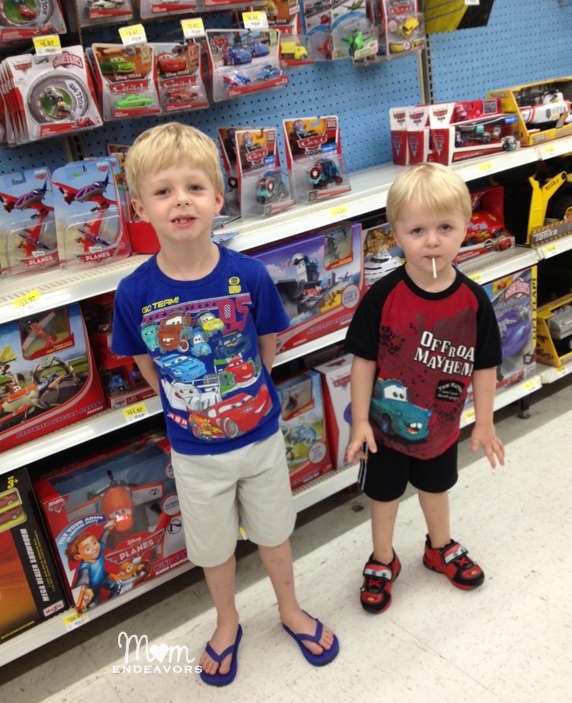 There were so many fun things to choose from (you can see more of our sponsored Disney Planes Shop at Walmart with all the choices here). Ultimately we decided on some of the die-cast planes. I let them each pick two, then we had to get an extra one for Baby Brother of course! 😉 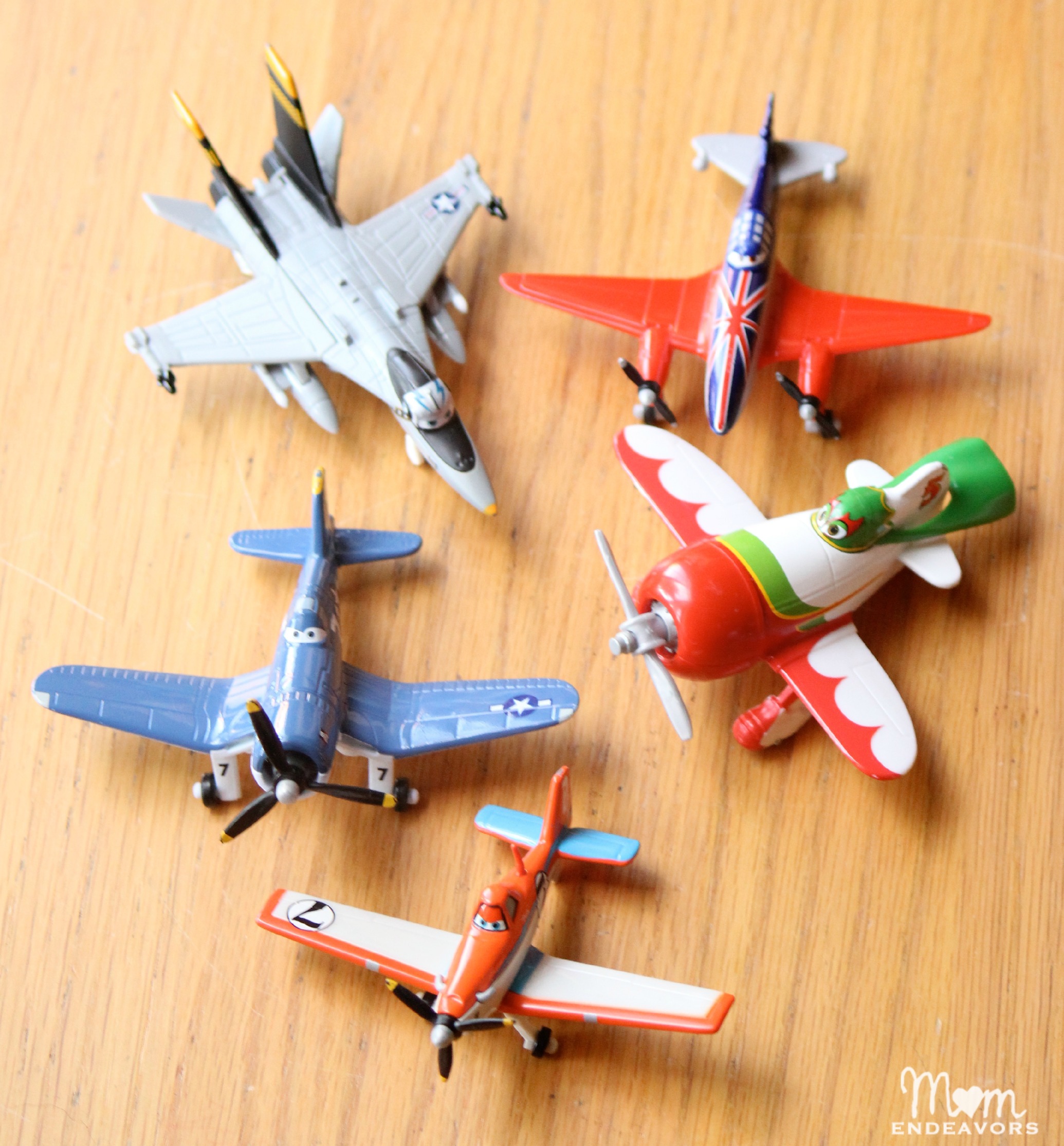 Fun new planes toys need a fun new runway to race on of course! Big Brother and I had big plans for that earlier in the week. But, the hospital stay put a damper on our plans. So, we were all so happy when we got to work on it this weekend. To build your own fun play runway, you just need a few supplies… 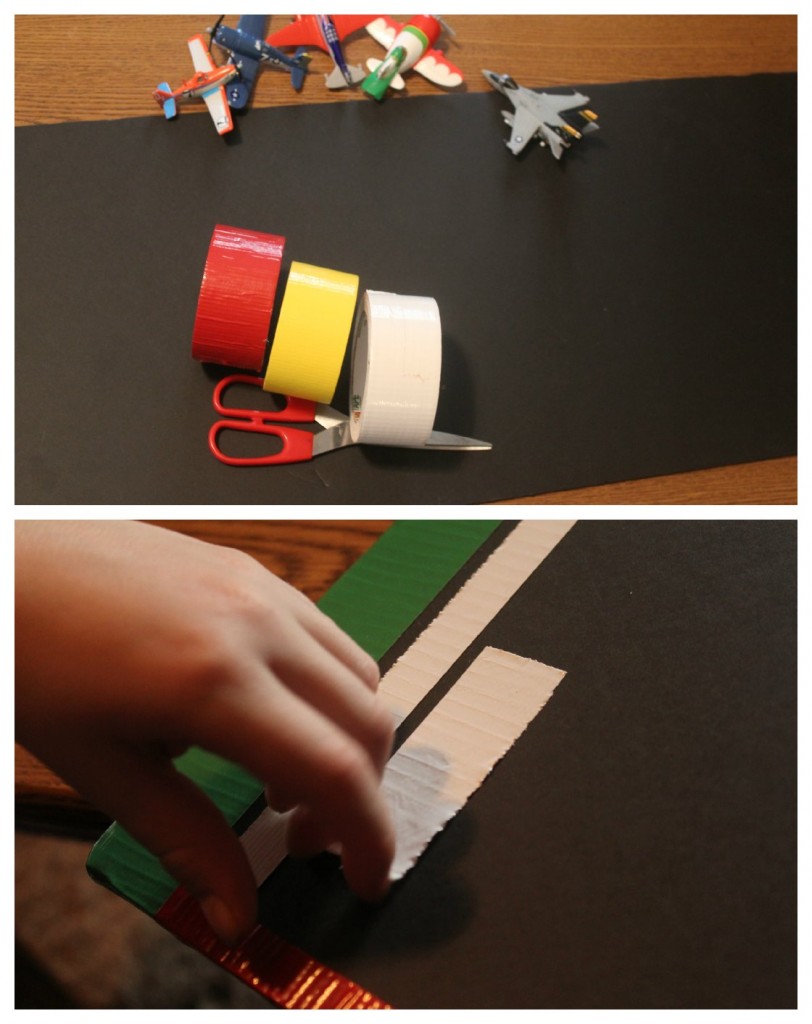 We used a cut piece of black Elmer’s foam core board and some Duct Tape. Simple as that. To make our toy runway, we did a Google image search for airports and runways. We just combined some various features at Big Brother’s request. I hadn’t planned for green originally, but he wanted some “grass” on the sides like many of the pictures showed. So, we put strips of green tape down the sides. Then, we added strips of white for the various lines and some yellow “arrows” that we saw in a few of the pictures. 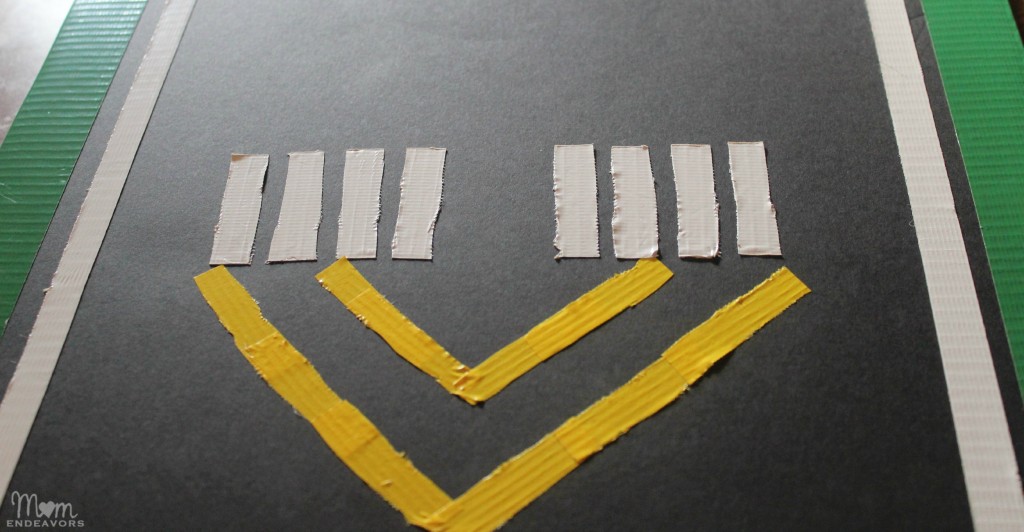 Big Brother thought our runway needed some lights too, so we did some red “dots” for those and a big red line at the end of the runway. The fun with making one of these is you can make it as elaborate or simple as you like. Big Brother and I made it together, so it’s not as “exact” as it could be. But, that is just fine. It’s perfect for the boys and extra fun since we made it together. 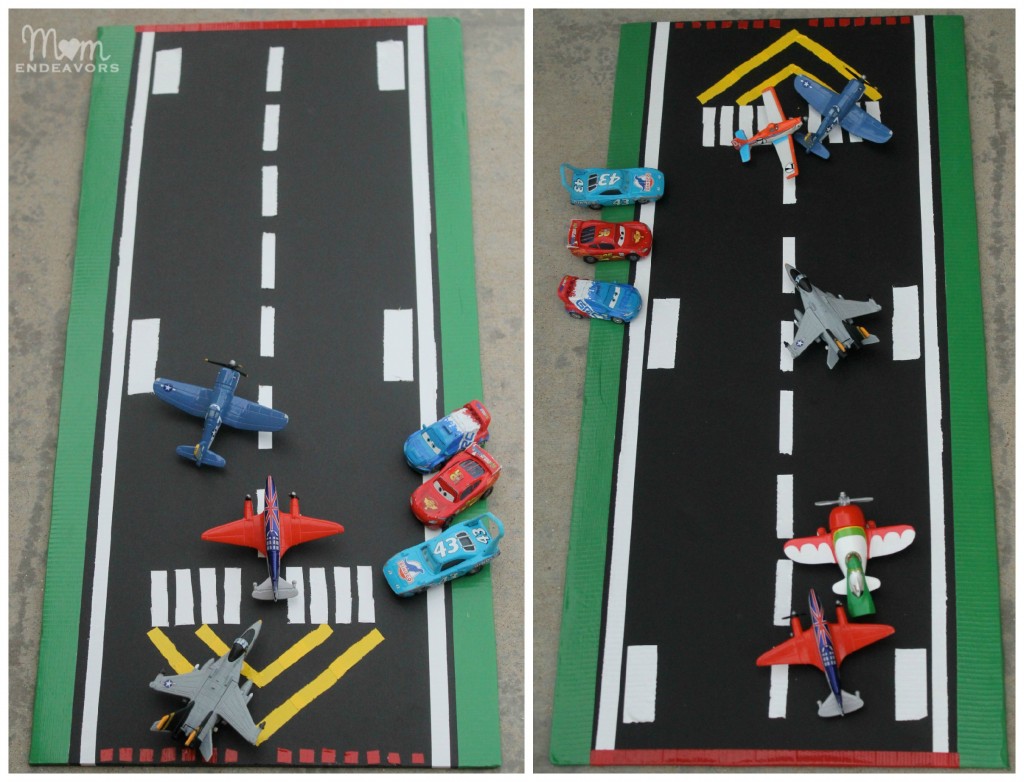 They had to take it for a “test spin” of course as soon as it was completed. Because our DIY runway is so light-weight, it’s easy for the boys to carry around. The took it right outside for some high-flying fun…and they even brought along a few of their cars to watch! 😉 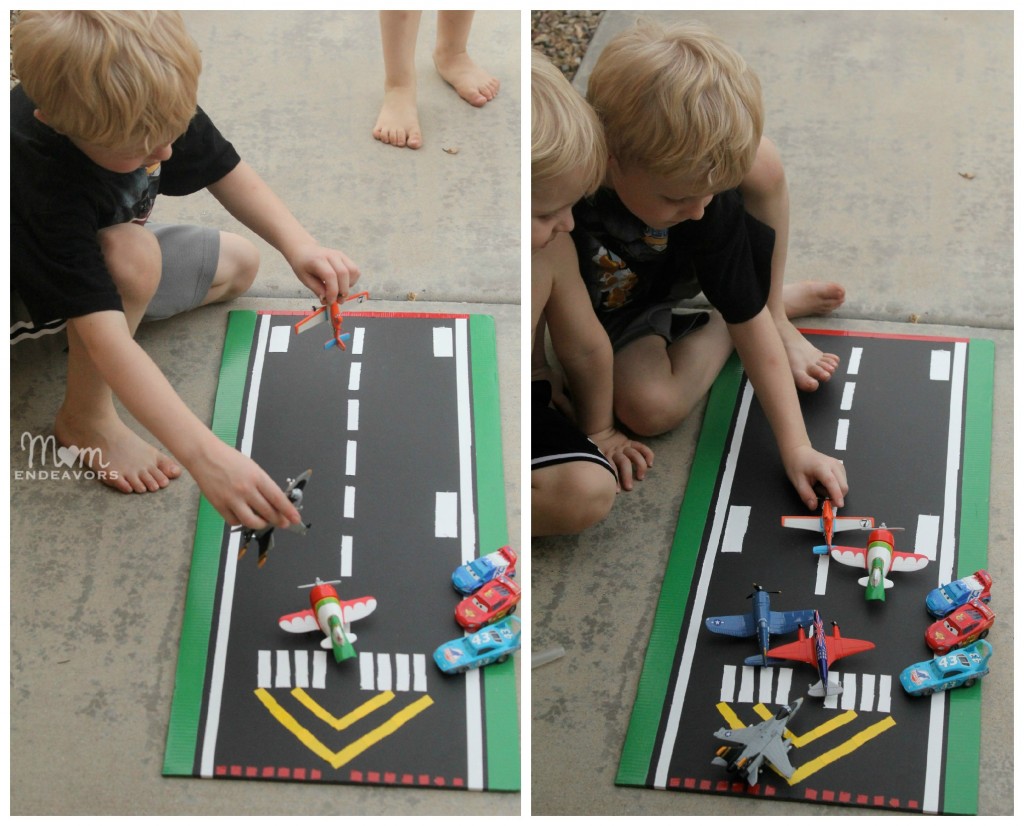 Needless to say, the boys LOVE their new Disney Planes toys and their runway!