It’s no secret that our family LOVES Disney Junior! Not only did I recently do some work for Disney Junior by making fun treats to go with some of our favorite shows like Elena of Avalor Churro Popcorn, Mickey & the Roadster Racers Stoplight Brownies, and Lion Guard Grub Snacks, but I visited Disney Junior while I was in LA for the #ThorRagnarokEvent Press Trip (invited and hosted by Disney) to talk all about the new show, Vampirina! So, today I’m thrilled to share these fun Vampirina Bat Wing Cupcakes today, along with fun information about the show and our interview with show producer, Chris Nee. 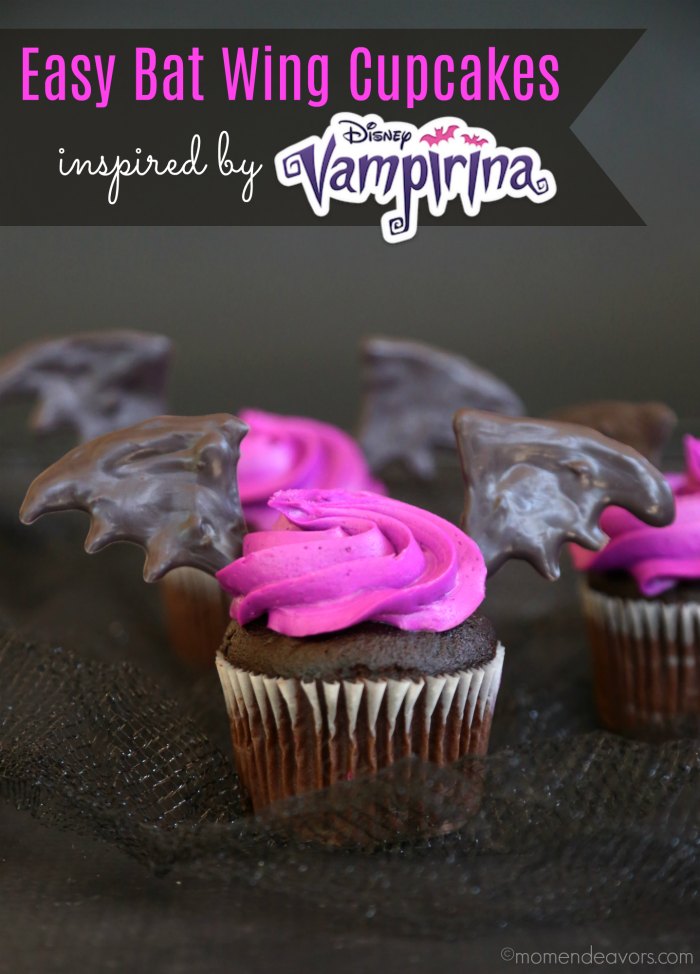 Aren’t they cute?! For those not familiar yet, Vampirina (premiered 10/1/17) tells the story of a young vampire girl, Vee, who recently moved with her family from Transylvania to Pennsylvania. The show is based on the popular children’s book series, Vampirina Ballerina. And it’s SO cute! The show, produced by Chris Nee (the same producer as Doc McStuffins), is SO good – it has a great message, it’s fun, and the theatrical Broadway-style music is fantastic!! My boys (ages 10, 7, and 5) all love the show! 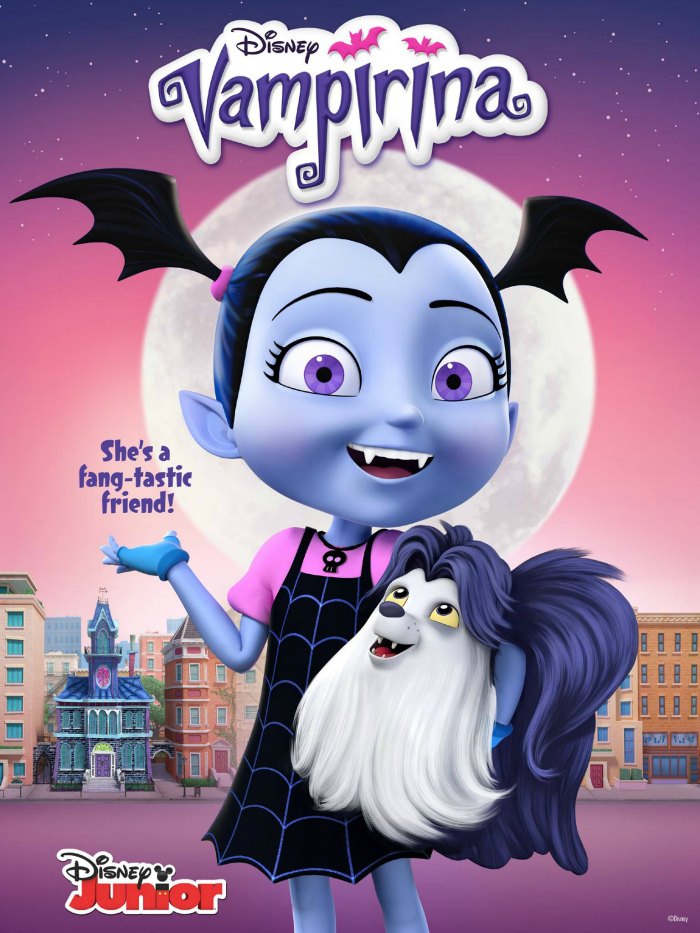 So, as part of our time in LA, we got to sit down for a fun Q&A session with the series’ executive producer, Chris Nee. She has such great energy and you can tell she is really passionate about making GREAT shows for the whole family! Here’s some of that to help give you more a feel about the show: 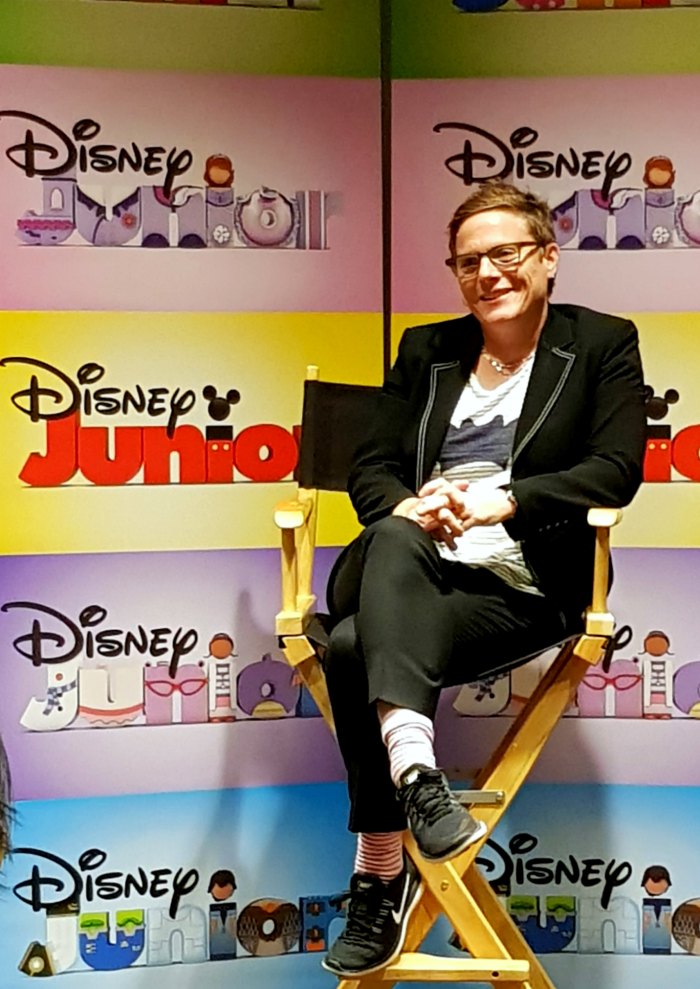 Q: What’s your secret to writing or crafting shows that both adults and children enjoy?

“I would say that I think it’s incredibly important because what I really want to do is bring families together to
watch shows. For me, for whatever reason, I have a great ability to remember what it felt like to be a kid and that’s obviously what I’ve tapped into for twenty years working in kids TV. I’m trying to make myself laugh and I’m trying to work out my own stuff and remember my
own childhood and remember those feelings. I’m also a mom so, I certainly know what it’s like to want your kid to watch shows and that the music is something you can stand ‘cause you’re gonna watch it a lot.”

And the music is great! Done by Broadway composers, Dimond and Kooman, the show has a great sound! Here’s a little glimpse of some music in the show (this one with a more pop sound) from “The Ghoul Girls” Episode:

Q: Did you pull inspiration from any other shows because there’s something about Vampirina that makes me think of the Munster’s.

“I definitely thought about the Munster’s and the Addam’s Family. Those are sort of the obvious callbacks. And I went back and watched some of the episodes. It’s funny what works and what doesn’t work in those. There’s some truly dark stuff in there, which I had forgotten. I mean, I sort of grew up watching those shows.”

Q: What important children conflicts do you plan on addressing in this show?

“…It is a show where we say, ‘she is different and sometimes that’s hard to be friends with.’ We’re not saying that she isn’t different; we aren’t saying that everybody’s exactly the same…It’s Bridget who struggles every single time and yet she loves her friend. So she’s gonna keep facing the stuff that’s hard for her to get there. And you know, honestly we need a little more of that in this world – facing the stuff that is different. We have a huge country that’s really different. Maybe the only way that we’re gonna get someplace is to say, ‘you’re different from me, but let’s hear each other and I still want to be your friend through it. We can still find common ground.  I think for me, that’s what this show is.” 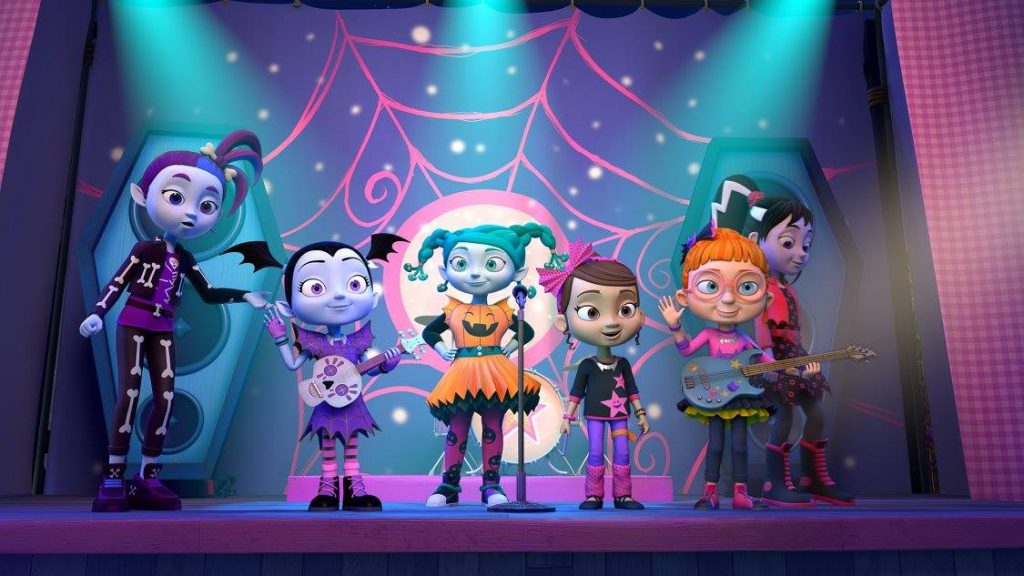 I LOVE THAT – so much. “You’re different from me…and that’s ok. I still want to be your friend”. Such good stuff! Chris also touched on some of Vampirina’s struggle with her identity. “She doesn’t want to give away all of who she really is but also wants to fit in. We’re gonna see a lot of that play out –  of her trying to understand what her identity is. Is she Pennsylvanian now? Is she Transylvanian? Is she allowed to be both at the same time? And how do you own that? And there’s some beautiful stuff coming up with Nanpire, which is the grandmother played by Patti [LuPone]. It is about what it’s like to come in to a new place and how much do you take on, how much do you hold on to yourself?”

I love a good family show that is fun and has a good message! And, I love that my kids love the show – my youngest really is batty for it! He loves the show, the books, everything! So, between all the fun we’re having with the show AND Halloween right around the corner, I thought some Vampirina Bat Wing Cupcakes would be PERFECT for a fun treat while you watch the show!!! 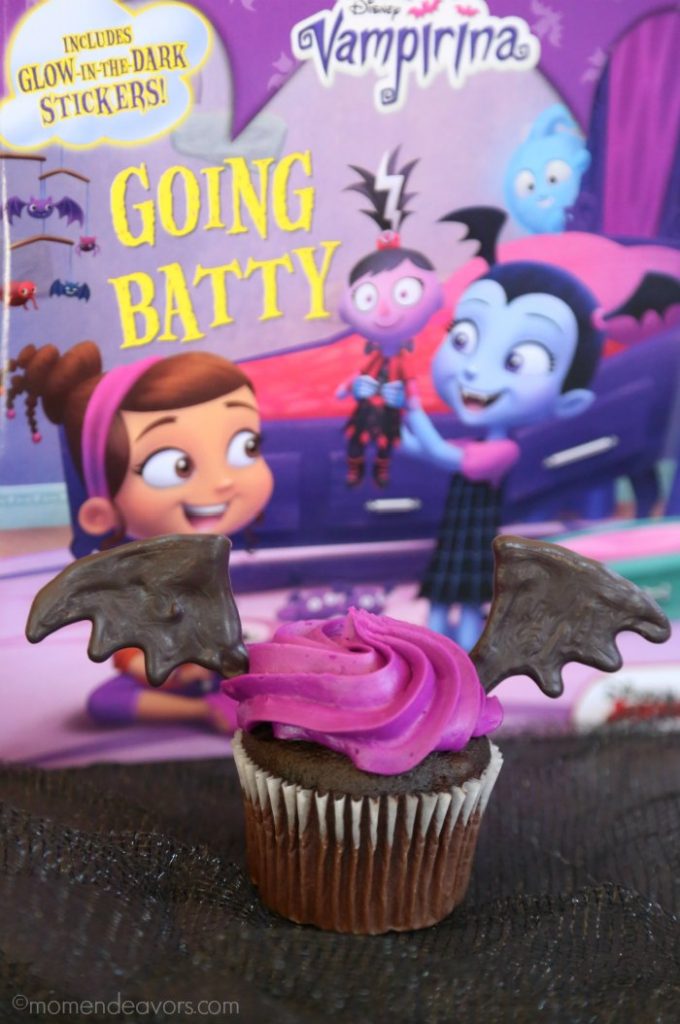 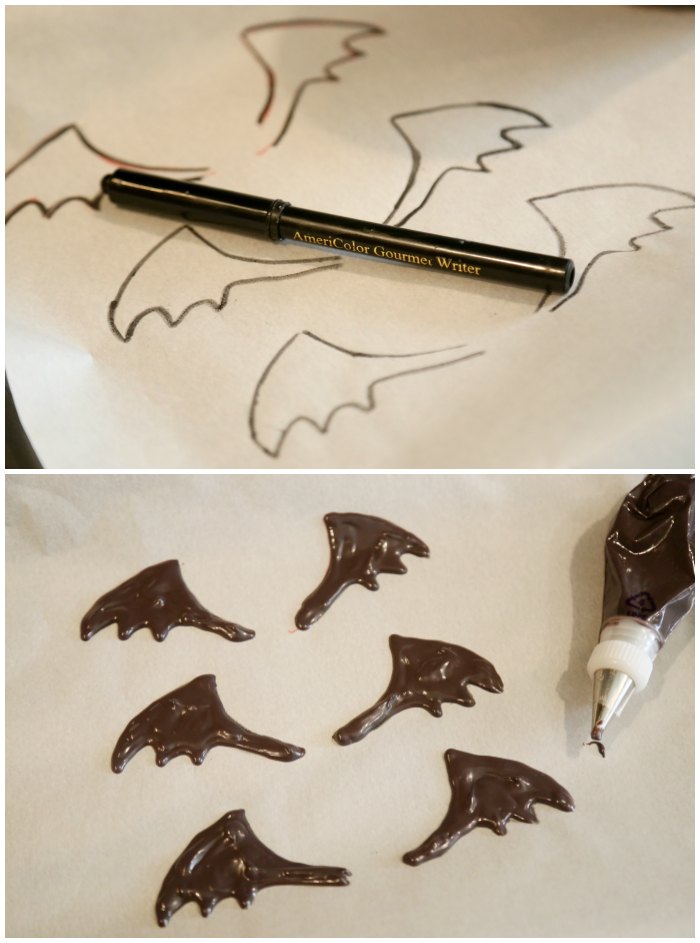 So, head to the store and pick up some chocolate cupcakes with purple frosting or make your own.  Using a printed photo of Vampirina’s bat wing pigtails (or your own free hand drawing), use a food writer pen to make a temple of the wings on a piece parchment paper (place the parchment paper on a cookie sheet). Once you have as many draw as you need for the number of cupcakes you’re making, melt your candy melts. Place the melted candy/chocolate into a piping bag with a small tip. Pipe the black candy into your template areas on the parchment. Transfer the parchment-lined cookie sheet to the refrigerator or freezer to set the wings. Once set, carefully remove the candy bat wings and place them into the cupcakes to look like Vampirina’s wing pigtails! 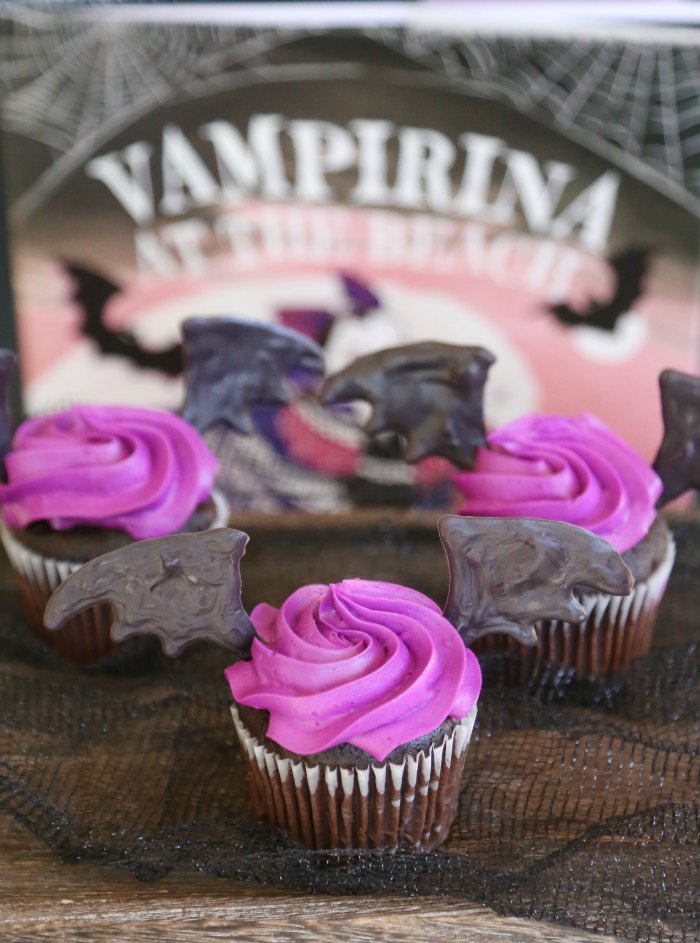 Easy & cute! Aren’t they fun?! These cupcakes are such a fun treat for while you watch the show (or read the books).  You can watch Vampirina on Disney Junior and Disney Channel (and on the DisneyNOW app).  For more Disney Junior fun, follow them on Facebook, Twitter and Instagram.

Disclosure: Disney hosted  me in LA in order to attend screenings and to participate in group interviews & media events. As always, all opinions, experiences, and love of Disney are entirely my own! 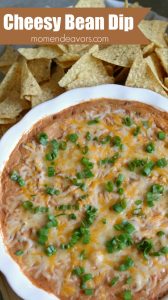 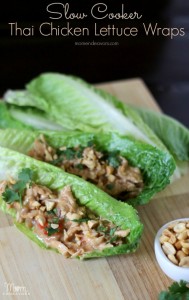 Countdown to a Better You with Tyson® Grilled & Ready®