This is the second of a series of posts about breastfeeding and my very personal experience with it. If you haven’t read Part 1, it might help to start here.


It was a Saturday morning and the Pediatrician’s office doesn’t normally see new patients. In fact, they said we just needed to wait until our scheduled appointment. But, we persisted; they sensed our desperation and agreed to see us. He was weighed and was down a pound from birth…and he was jaundice.
Then the screaming began. Inconsolable screaming.  The nurse asked if my milk had come in. I asked, “how would I know”? (not sarcastically, like genuinely, HOW would I know?) She said, “Oh you’d know”. So, clearly then, no my milk had not come in (this was 4 days after birth). They said he was screaming because he really needed to eat. I said I had just nursed him before we came. The nurse said that since it had been 4 days and I had no milk, he really needed food. They gave us a small bottle to try. He attacked the bottle like a velociraptor and I watched him suck that little tiny bottle dry in seconds. The screaming stopped. My parents were right. The nurse was right. My gut instinct was right. He was hungry starving! It broke my heart.
In addition to starving him, my lack of milk led to a jaundiced little guy. The doctor was concerned. Immediately from there, we had to go to a lab to get his levels tested (thankfully, they ended up being just low enough to avoid any treatment other than food & sunlight at home). Before we left though, we talked to the doctor about the feeding issues. She explained that sometimes first-time mom’s milk just comes in a little late. It would probably be in by that night–the next day at the latest. Her advice: continue nursing as often as he will do so. But, since I had no milk in and because of his jaundice, we would need to supplement. So, the day went on, we continued nursing, but supplemented afterward. Thankfully, the screaming had subsided. 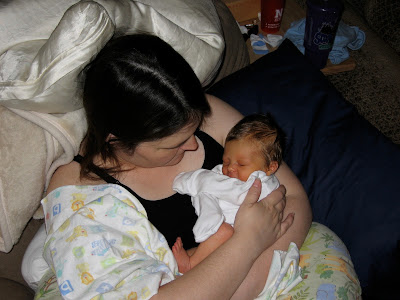 The night came–no milk. Sunday came (now 5 days after delivery)–still no noticeable milk; still a baby that was a huge struggle to get latched on; still a baby that wouldn’t nurse for more than a few minutes (despite repeated attempts to reposition, relatch, wake-up, etc). On Tuesday, we had our previously scheduled pediatric appointment. The focus was almost entirely on nursing. She asked about engorgement–um no. About leaking…again no. About sensations of letdown…what was that?! Clearly, there were some issues going on. Time to see the lactation consultant again.
We couldn’t get in until Friday–10 days after delivery. Not ideal (and in hindsight, a BIG issue). In the meantime, I was reading all my breastfeeding books, pamphlets, etc. to try to seek out answers. And everything made me feel like a failure. If your supply is low: “you’re not nursing enough, not drinking enough water; not eating enough; not sleeping enough, too stressed”–the list went on and on of what “I was doing wrong”.  Only one resource I had even suggested that some women might not produce enough milk–and even at that, it was only a small paragraph. No tips on what to do or how to fix it.
Failing isn’t something I handle well–your stereotypical “first-born, perfectionist, straight-A student.” I was devastated. That may sound overly dramatic for something like breastfeeding, but it’s true. My mom was concerned and stayed with us longer than anticipated and I remember collapsing into my husband’s arms–bawling tears of failure and guilt more than once. This natural process that “every woman’s body is made to do”–that was “BEST” for my baby and I couldn’t do it. If you’ve never been there, the agony is hard to explain. And, maybe for some, it’s not as painful as it was for me. But, knowing that I wasn’t succeeding at this “natural process”, and then being told by every source imaginable that failure to do so would be detrimental to the well-being of my precious little baby, was horrible.
My only hope was that the lactation consultant would have a magic solution…