It’s been a BIG tooth week at our house, complete with a Tooth Fairy visit! If you follow on instagram, then you may have seen that Big Brother lost his second tooth this week! And, the boys had a big trip to the dentist–a first for Little Brother! So, what a better extra fun Tooth Fairy surprise than a new toothbrush? (Seriously, Big Brother has been SO excited about his Tooth Fairy toothbrush presents). Even more exciting than a regular ‘ole toothbrush is the Arm & Hammer Tooth Tunes brush! 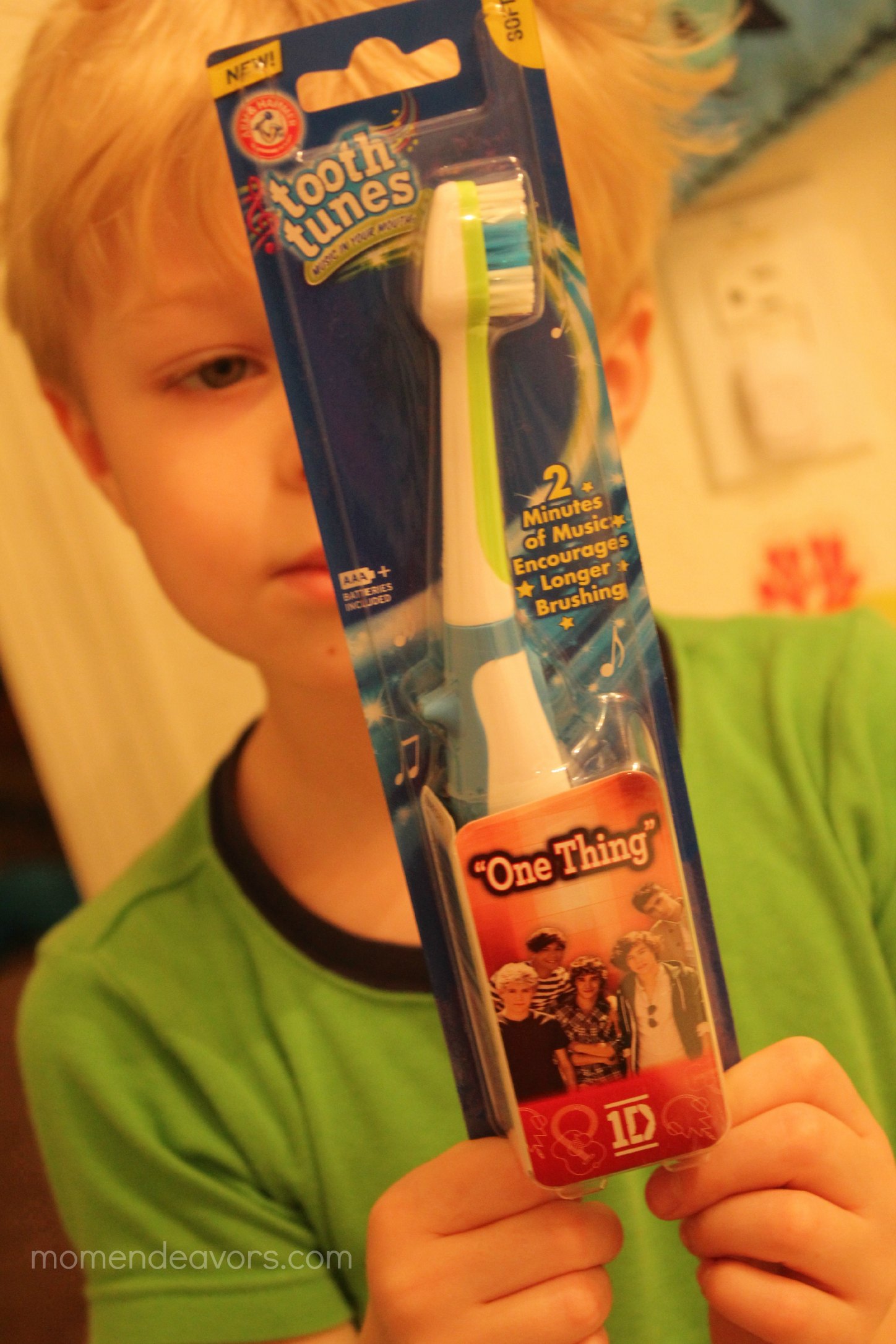 Now, I know he doesn’t look excited there, but believe me, he was. What’s funny, is that at his young age he has no idea who One Direction is. But, because of playing Just Dance 4, “What Makes You Beautiful” is one of his favorites. So, I was seriously bummed that we didn’t get that one! 😉 But, he didn’t know the difference. He just liked the fun beat & music!

Haha…he’s already mastered the toothbrush mic pose and he’s only 5! 😉 The fun part about the ARM & HAMMER Tooth Tunes brushes is that with just a little button push, a 2-minute long popular song plays. Special technology streams vibrations vibrations from the bristles of the toothbrush through the teeth, allowing kids to hear the music while they brush. That of course encourages longer brushing to help kids achieve the dentist’s recommended brushing time. After launching in July of 2012, ARM & HAMMER Tooth Tunes featuring One Direction are the only the only toothbrushes that play One Direction in North America. In addition, they also have a number of other popular songs to choose from, like “All Day” by Cody Simpson, “I Gotta Feeling” by Black Eyed Peas, “Tonight, Tonight” by Hot Chelle Ray, “We Will Rock You” by Queen, and more!

Whether your child is a pop music fan or not, these fun Tooth Tunes brushes are great for encouraging brushing and making brushing fun. Our boys actually do pretty well (even the dentist office was impressed…especially that Little Brother got through the entire exam). But, I know there are many little reluctant brushers out there. Maybe a toothbrush that plays a fun song will help make their brushing routine more fun!

What Tooth Tunes Brush would YOUR kids like best?