Imagine heading to work in a place that somehow feels both like home and like being transported to another world. Imagine a place that has all the serenity you might expect from a quaint country inn nestled in the hills of Scotland or a beautiful vineyard in Italy, yet has some of the most state of the art technology in the entire world – where some of the world’s most creative minds come together to get inspiration and fine tune their creations. It’s a place that’s grand yet comfortable; it’s a place where creative artistry & technology is surrounded by nature; it’s peaceful; it’s beautiful; it’s Skywalker Ranch.

Skywalker Ranch is the creation of George Lucas (best known for Star Wars & Indiana Jones) and is the pastoral home to Lucasfilm’s celebrated audio postproduction facility, Skywalker Sound. In the late 70s, George Lucas bought a significant amount of property just off Lucas Way in the hills outside San Francisco (the road was already named, it’s just pure serendipity that Lucas bought land here). Once you enter the ranch and clear security, you drive through a covered bridge, pass gardens, and pastures, and even a baseball field. Then, you’ll pass under an archway on the drive leading to the Skywalker Sound building, scrawled with “Viandante del Cielo” (roughly translating to “Skywalker” in Italian). 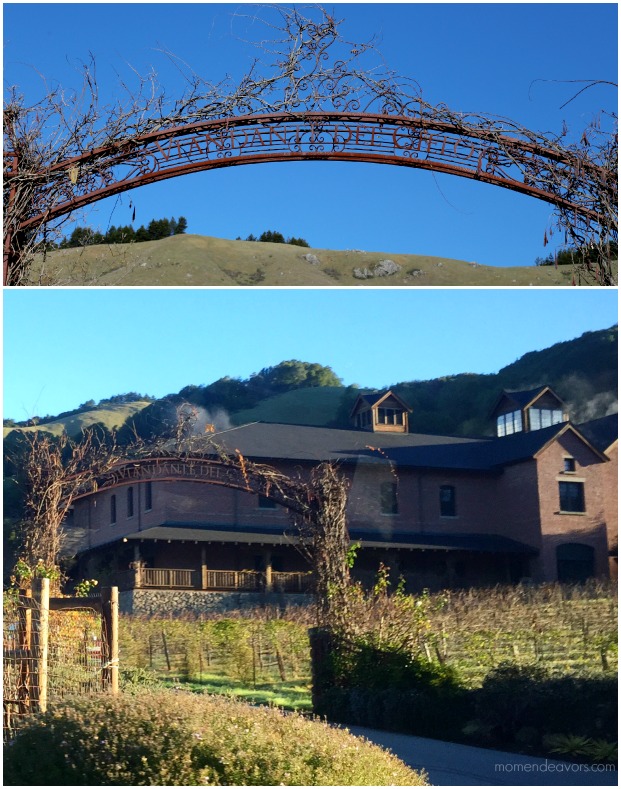 George really wanted a workplace outside the normal “work grind” of the city–like a sort of filmmakers retreat and place for creative inspiration. So, he created just that with Skywalker Ranch. Skywalker Sound occupies the 153,000-square-foot Technical Building (the building in the photos above and below), which features a world-class scoring stage, six mix studios, ADR and Foley stages, 34 editing suites, and a 300-seat screening room. I had the unbelievable honor to get a rare look inside and I’m so excited to share the details! 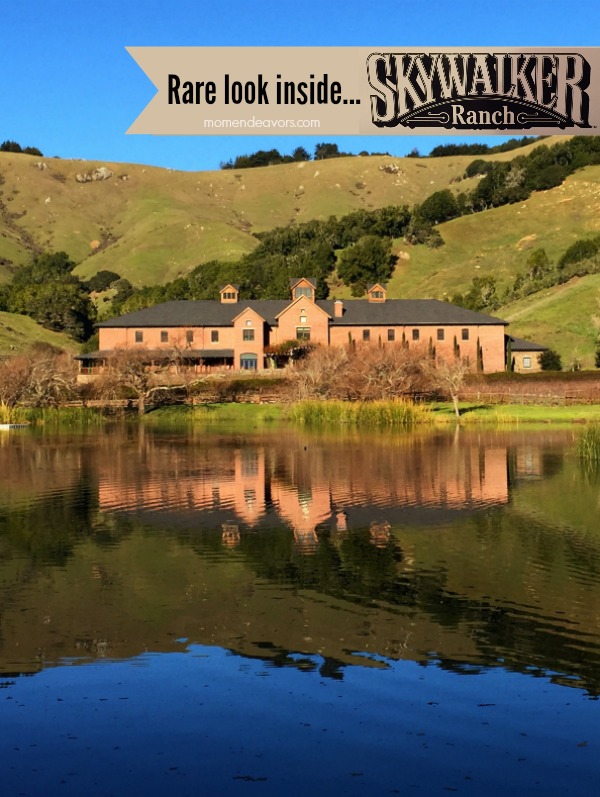 George Lucas is obviously best known for movies like Star Wars and Indiana Jones. However, I had the pleasure of being there to screen his most recent film, an animated feature and one that he’s been dreaming up for about 15 years – Strange Magic. You can tell it’s a project that’s near & dear to his heart (I’ll be sharing more about our George Lucas interview next week) ! And, a small group of bloggers and I got to watch the movie inside the Skywalker Sound 300-seat Stag Theater at Skywalker Ranch (which has probably the best sound of any theater in the world). The fact that we were watching the movie WITH George Lucas inside his theater is mind blowing! 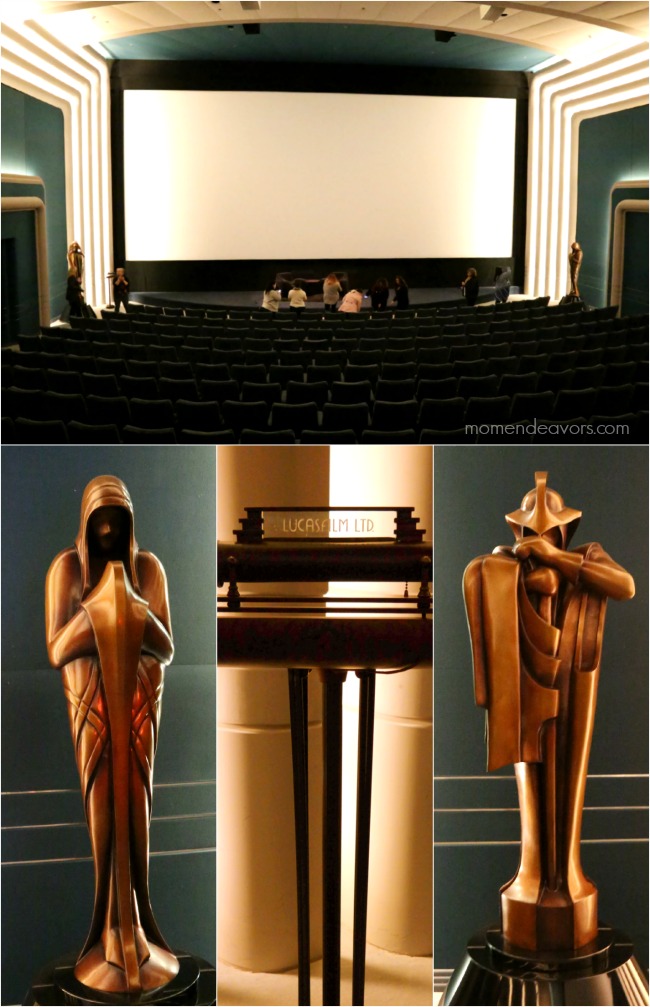 After viewing the movie and interviewing George Lucas, Director Gary Rydstrom, and actor Elijah Kelley (who voices one of the movie’s main characters with his incredible singing voice), we spent the entire afternoon getting a tour of Skywalker Ranch from two of Lucasfilm’s most awesome PR managers. WOW! 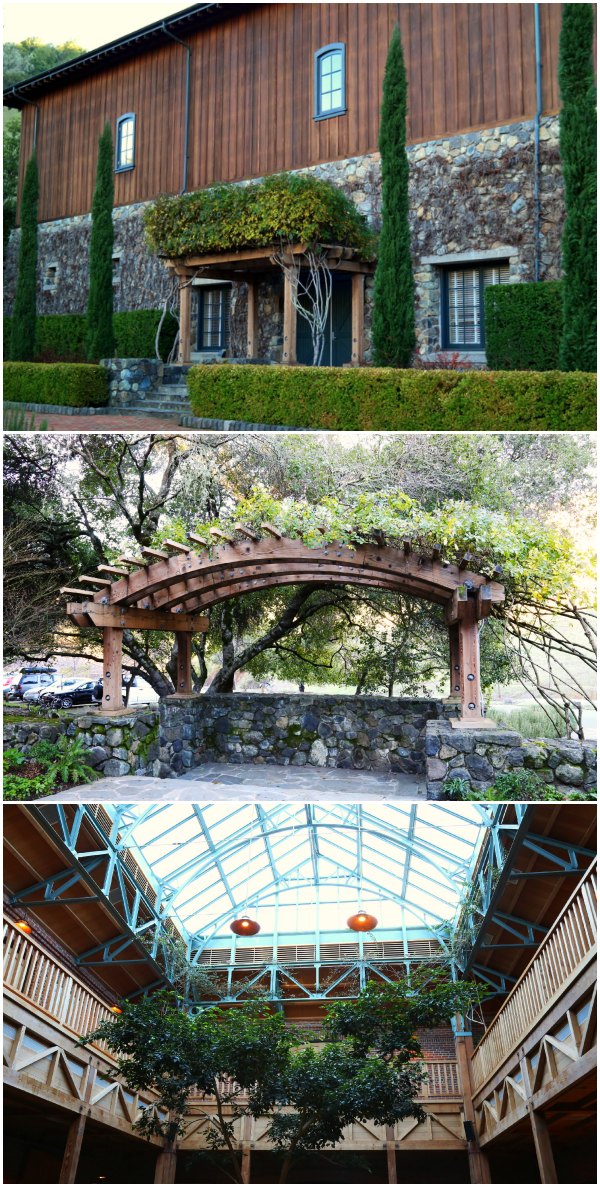 The Tech Building (home to Skywalker Sound) is where our journey began & ended. That building really has a sort of old winery feel to it, with its stone/brick walls and wood. There are rich color tones inside. Immediately upon entering there was the bright atrium type area with a small cafeteria-style eating place with lots of round tables and chairs. That’s where we had lunch and that’s where we ran into Pete Docter & Jonas Rivera (director & producers from Pixar) who were up on the ranch cutting some sound for Pixar’s new Inside Out! Aside from the great architecture, what you immediately notice in the building are all the movie posters. Lucas has amassed an amazing collection of original movie posters (many in foreign languages). My favorite was the original Walt Disney “Bambi” poster! 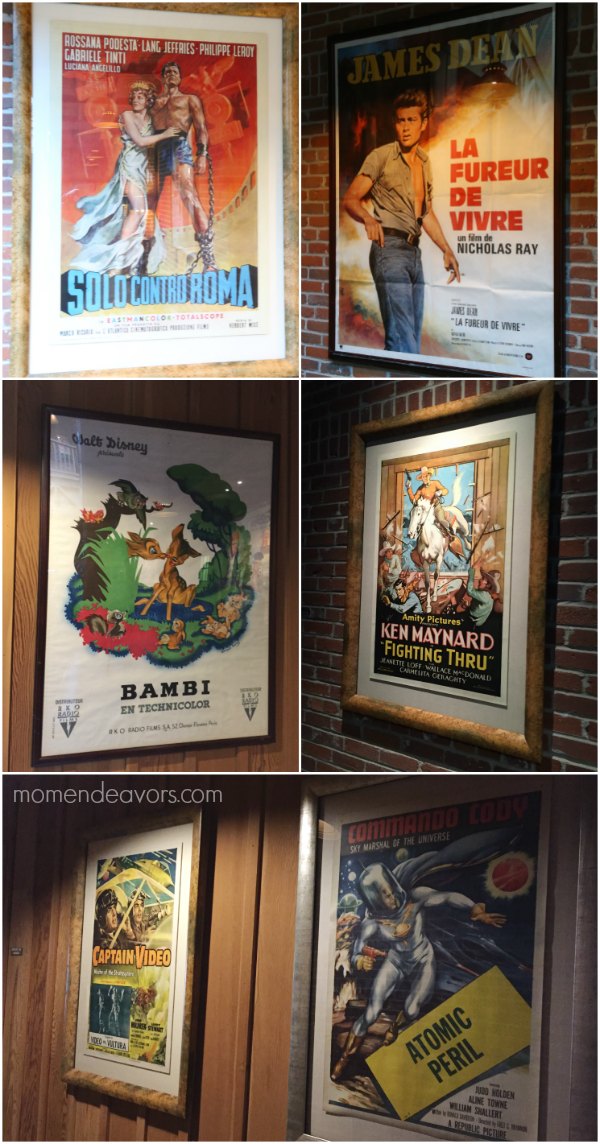 We also took a quick stroll through a hallway that houses some offices/working room areas and there we happened upon all kinds of more recent movie posters that were given as gifts to Skywalker Sound – thank you gifts of sorts, with signatures from the crew thanking Skywalker for a job well done! Skywalker Sound/Industrial Light & Magic has been involved in working on the sound and/or visual effects for sooooooo many movies!!! This is just a small sample: 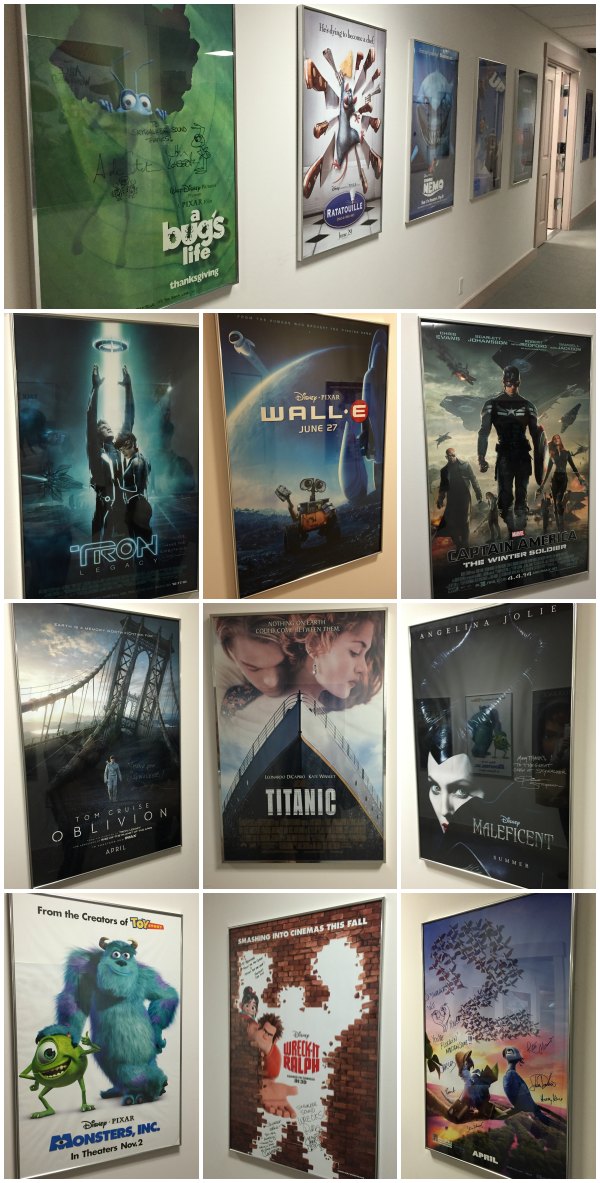 And, here’s a close-up of a few of the fun messages! I LOVE it…and LOVE that they have all of these up on the walls!

After our time in Skywalker Sound, we set out to tour the grounds. Down the road just beyond Lake Ewok, you’ll find the iconic main house which was designed with a Victorian style. And, it is beautiful!! On the way, you pass some of the Skywalker vineyards for their Skywalker Ranch Viandante del Cielo wine (they grow the grapes on the ranch & the wine is made at Francis Ford Coppola’s winery). I can only imagine how beautiful this is when the vines are full of grapes! 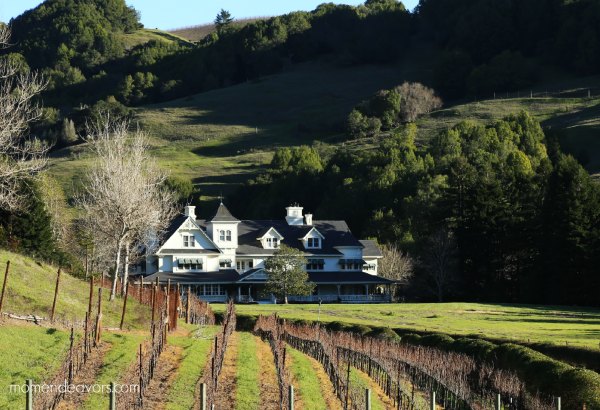 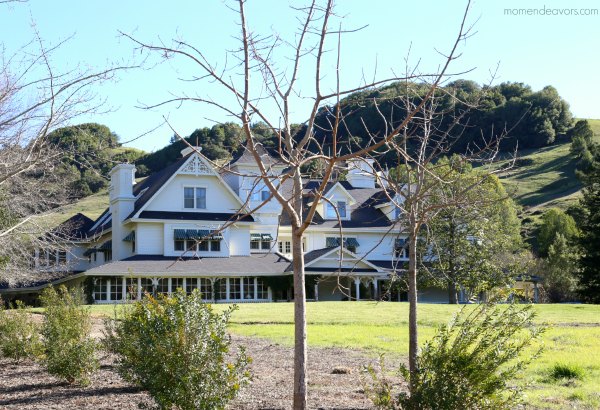 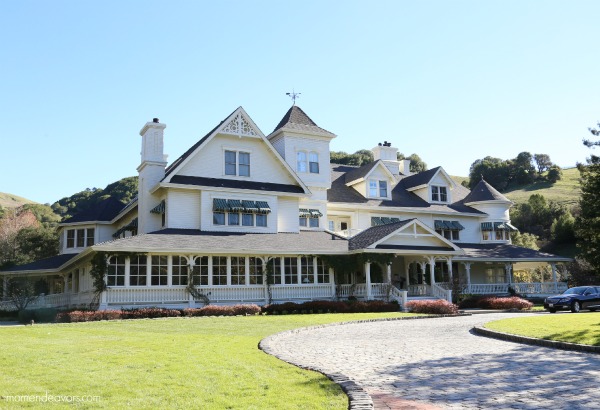 Isn’t it incredible?! This main house was the first building on the ranch and is home to all kinds of amazing things – like George Lucas’ office and some incredible movie memorabilia. Lucas’ office is in the turret part of the house on the right side. 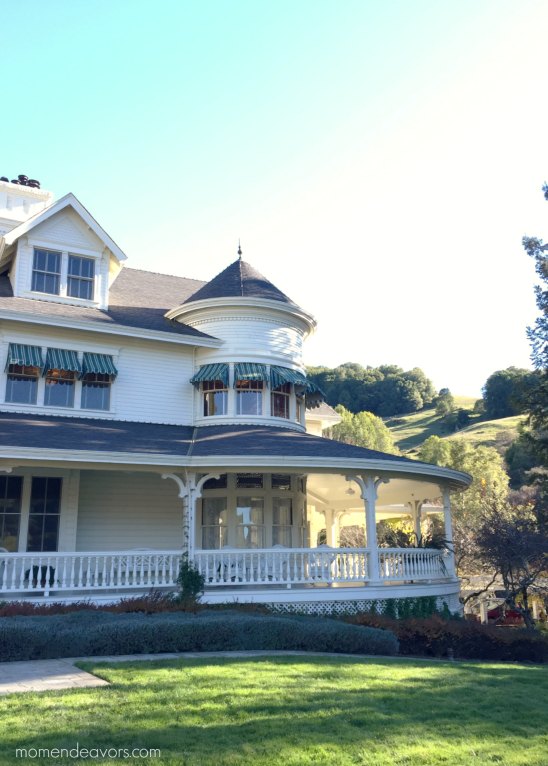 The house is a working facility. There are offices, board rooms, a private dining room, a restaurant, and I’m sure a whole bunch of other magical things that we didn’t get to see. Being able to see inside was a huge privilege as this is a place NOT open to the public. So, sadly, we weren’t able to take pictures inside. But, I’ll do my best to walk you through with words. When you enter the main house, you’ll see a gorgeous large staircase directly across the walkway from the entrance. To the left, is the board room (which is not nearly as grandiose as you might expect) and through that room, continuing left, you would enter the Lucas’ private dining room! His baby daughter’s high chair was even set up there!

When you enter and go to the right, you walk through a small hallway featuring two memorabilia cabinets. The cabinet on the right housed mostly all Star Wars items, including some of the models used for the movie like an AT-AT and small model sculpture of Jabba the Hut. It was incredible how small the models actually are! The AT-AT is only about 18 inches tall! The cabinet on the left housed special artifacts from movies like Indiana Jones (including the whip & Indiana Jones hat), the chalice, the golden idol from Raiders, and the crystal skull. It also houses some meaningful gifts that George Lucas has received like Rudolph Valentino’s whip, and Charlie Chaplin’s hat and cane. Also included was Mark Hamill’s (Luke Skywalker) Hero Lightsaber that actually went into space on a NASA mission. He has a photo from the mission showcased behind the lightsaber. 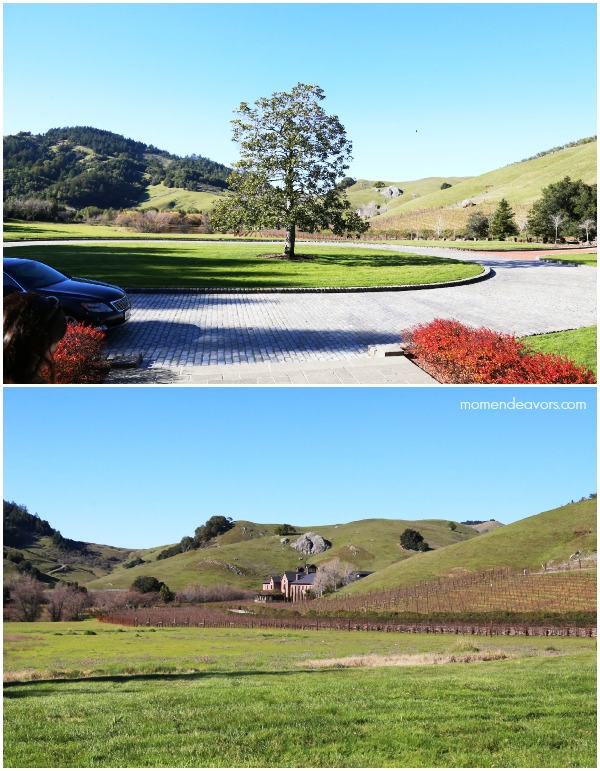 After walking through that small hallway, you enter a large living room and seating area. From the large windows in that area, you can see gorgeous views of the ranch. This space is meant to be a relaxing sitting area for employees to come take a break, get inspiration, etc. The room features bookcases filled with books (all George Lucas’ personal collection), a couple couches and chairs, and some of his large Norman Rockwell painting collection. As you continue through the house, then you come upon a fun media room of sorts where George actually holds some interviews! When you enter the room, you’ll see an amazing collection of records and LPs on the right. You’ll find some Star Wars soundtracks in there, mixed in with other fun things like Air Supply. As you’ll find out when you see Strange Magic, George Lucas loves music – of all kinds. On the left wall, were cases of all kinds of video/computer games. There were Sooooooo many Star Wars games there!! 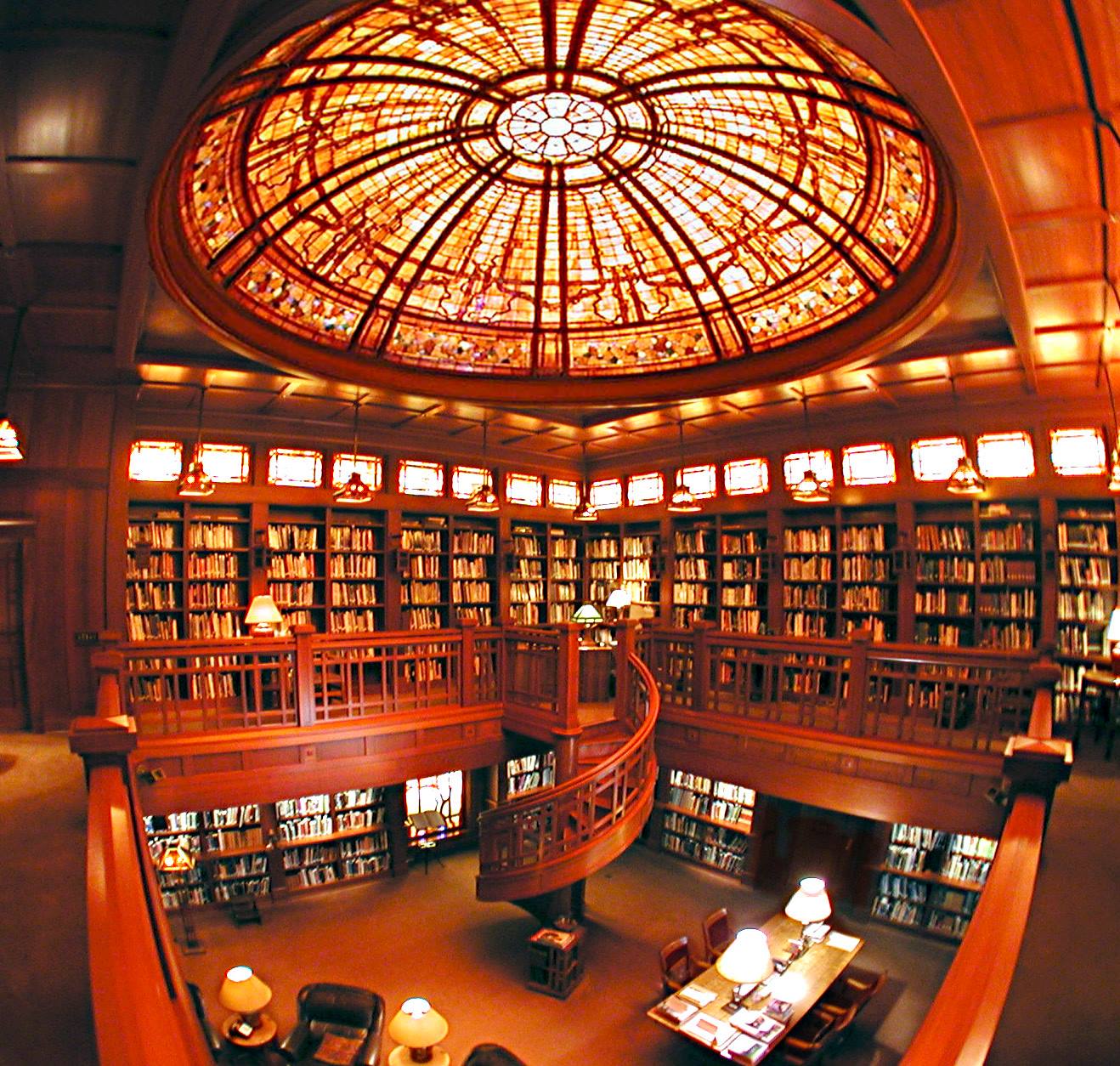 Then, there is the library. Oh the library! It is spectacular!!! The Lucas Research Library is actually a full service research department providing reference for film, television and theater productions. It’s a place where those working in the film/entertainment industry can come to do research, get inspiration, etc. The library acquired the Paramont Studios Research collection in 1987 and the Universal Studios collection in 2000. There’s over 35,000 books (spanning from the 1800s to present day), current subscriptions to over 50 magazine titles, and over 700 file drawers containing photographic files housed in the library. And, clearly from the photo above, it is gorgeous! All the wood work was done on site (there was an old mill originally on property)! And, that stained glass dome is AMAZING!!

Just outside the library was a gorgeous open sun room with large trees in the middle. Down below, you can see more “secretive” research portions of the building. In fact, on the second floor, our guide shared that there is actually a “super secret” art room where work is done on all kinds of special projects! Oh my!! And, there is a full editorial suite in the building as well – where George Lucas did a lot work for Star Wars!!! WOW! Where the magic is made, y’all! 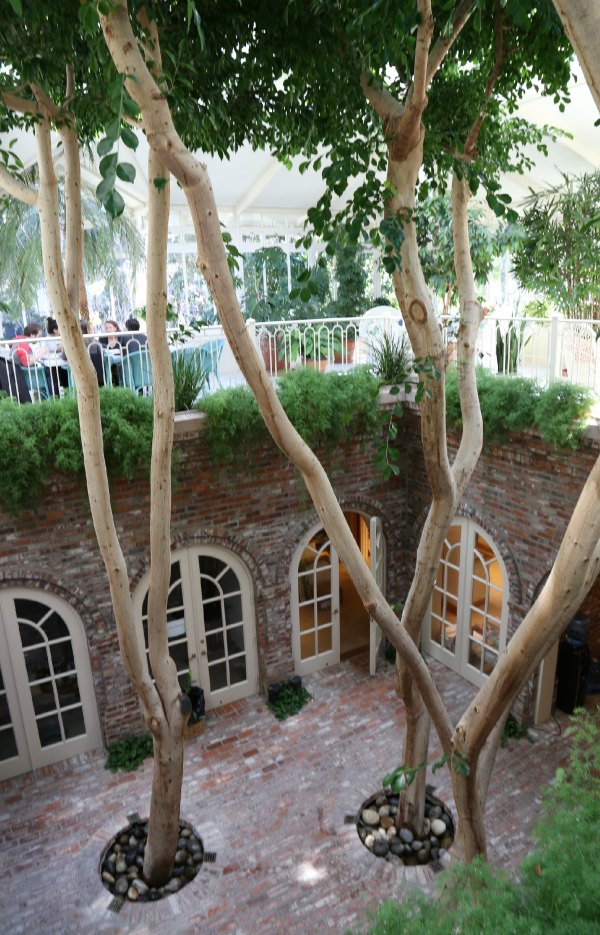 The area behind the house was so nice as well! Fountains, the back porch of the main house restaurant, open space (where employee BBQs are often held), and hidden in the trees are some office spaces (that look like cabins) where filmmakers can come do a retreat of sorts and/or do post-production work for their films (the “cabins” are fully equipped with amazing editing tools). 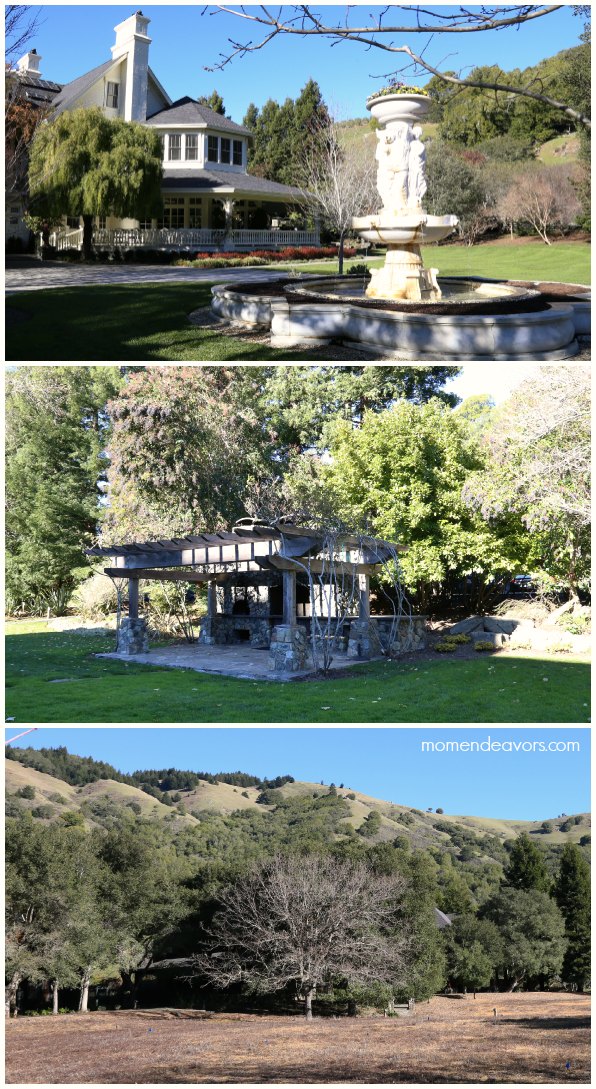 From the Main House, we then walked to the Fitness Center where the Skywalker Ranch store is located. The walk was absolutely gorgeous – like a little stroll through the forest. Numerous people joked that it looked a little like Endor (you know, the Forest Moon and all). We were waiting for some Ewoks to jump out or to see a speeder bike zipping through the trees! This is reminiscent of some of the forest scenes in Strange Magic as well! So, maybe the ranch provided a little inspiration there! 😉 It certainly is a place that could inspired creativity – I can’t imagine coming here for work! So awesome! 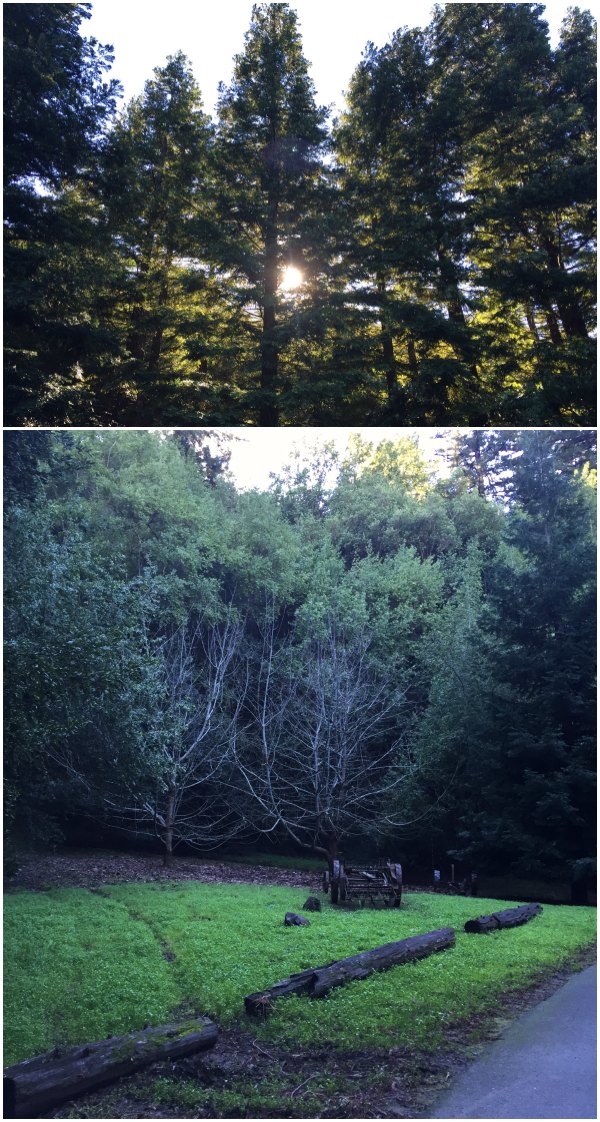 I may have dropped a serious chunk of change in the store! I mean, how often does one go to Skywalker Ranch?! And, with a husband who is a HUGE HUGE Star Wars fan (and 3 little boys at home who are following in Daddy’s footsteps), I had to come home with some special goodies! You can find Skywalker Vineyard wines, honey & olive oil (also from the ranch), t-shirts, mugs, glasses, and all kinds of other various “Skywalker Ranch” merchandise. My favorite was the Skywalker Ranch Fire Department items – that has the Millennium Falcon in the logo (I bought those shirts for the boys)!

And, yes, there really is a Skywalker Ranch Fire Department!! Lake Ewok (the man-made lake on property, fully stocked with fish) would actually be used for water in the case of a fire emergency on site. And, just outside the Fitness Center, is Lake Ewok which provided the most scenic spot for photos on property! 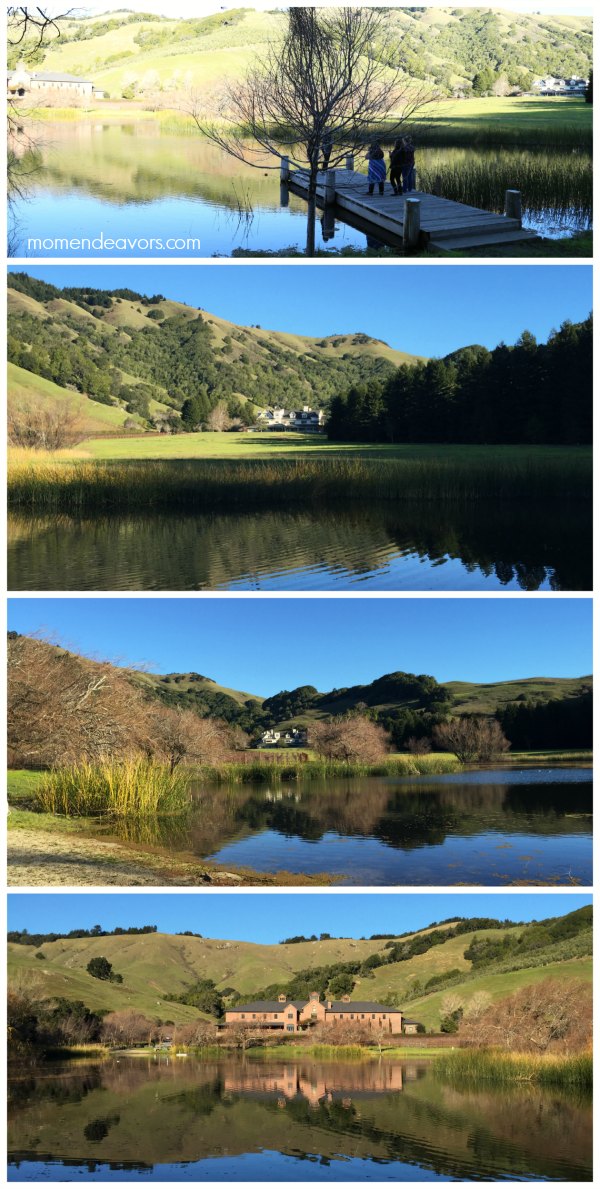 Here’s a quick video I took that gives you a little better feel for the property and scale of everything (standing on the back side of Lake Ewok).

Isn’t it absolutely beautiful!?! It’s hard for me to put into words what an incredible experience this was. So much magic has been made here! So much creativity! It’s truly hard for me to wrap my brain around! Amazing!!

So, be sure to take your family to see Strange Magic, the latest from the amazingly creative mind of George Lucas, when it hits theaters! It opens nationwide on on January 23, 2015!