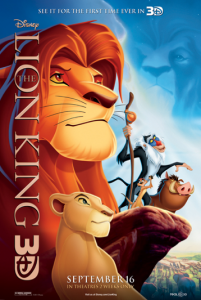 The Lion King 3D opened in theaters today for a special two-week engagement! With so many scenic shots, The Lion King was absolutely perfect for being remastered into 3D. Normally, I’m not a very big fan of the 3D movie-versions. But, we had the pleasure of attending a screening of the film last month and absolutely loved it! It could be just the bias of me really liking the Lion King–the animals, the music…LOVE it!! But, I really thought the 3D effects were great for this movie! One of the best parts was near the beginning of the film when Zazu flies overhead…kids (Big Brother included) reached their hands up into the air to try touch him! 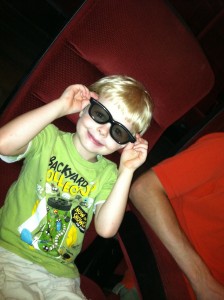 It was SO fun being able to take Big Brother to experience it on the big screen. We have a VHS copy (yes, we have a vcr…and yes, I am really excited about the DVD release next month), so he’d already seen the movie. But, it’s a whole different experience in the big theater and then in 3D on top of that. He did great with the 3D glasses and was generally mesmerized by the whole thing!

So, if you’re a fan of The Lion King, I definitely recommend planning a family movie day to take your kiddos to the show! But, just remember, it’s only in theaters for two weeks! And, if you’re looking for some fun Lion King crafts and fun foods, there are some great ones here on Disney Family.com! Head on over there to get the details on making this awesome Simba Hummus and more fun Lion King goodies! 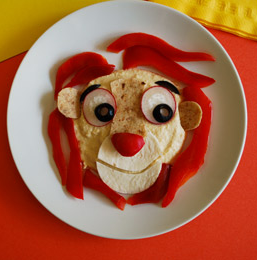 Will YOU be seeing The Lion King 3D?!

Dis­clo­sure: I saw this movie at a free press screen­ing at the invi­ta­tion of Dis­ney.  Thank you, Dis­ney! No com­pen­sa­tion was received.  All opin­ions and expe­ri­ences are my own and your opin­ion of the movie may dif­fer from mine.