We are big college football fans! Yes, I did say we!  Specifically, we are HUGE Husker fans! I was in the marching band all four years of college at the University of Nebraska–and because of a pretty good football team at the time, I went some pretty cool places, including the Fiesta Bowl and the “Grand Daddy of them all”–the Rose Bowl.  So, New Year’s Day always seems to be synonymous with football around our house. And, with at least multiple bowl games everyday through the weekend, there probably will be a lot of that on in the next few days!
And, what better way to watch some good college football than with football cake pops?! 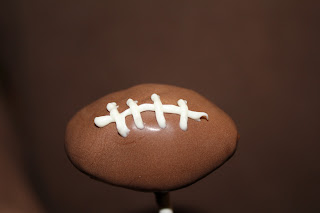 I then took it one step a few steps further and made a whole yummy football scene for our watching party! 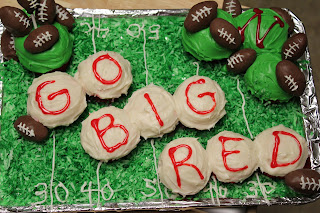 To make, I just whipped up some red cupcakes (they are Nebraska cupcakes, after all)… 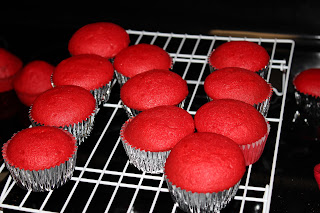 …and following Bakerella’s (the Queen of Cake Pops) wonderful detailed, step-by-step instructions,  I crumbled up about half of the cupcakes… 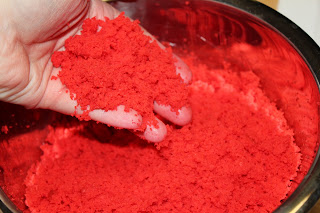 …added some delicious cream cheese frosting (made from Bakerella’s recipe here), shaped into cute little footballs, attached them to their lollipop sticks… 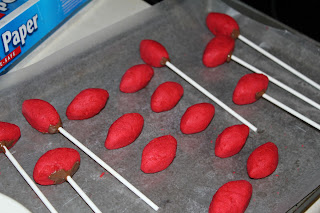 …dipped in chocolate and piped on some laces!

While these little guys are cute enough on their own, I decided to make the whole scene instead! 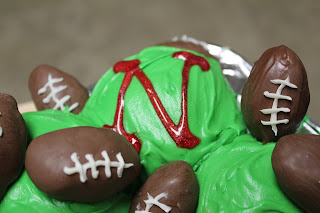 To do it, just color some of the frosting green and cut the lollipop sticks at varying heights and stick into/around the cupcakes! To make the field, put some shredded coconut in a ziplock bag with a few drops of green food coloring & shake until the coconut is green.  The yard lines are just piped frosting.

Just swap out the colors/sayings for your favorite teams and it’s sure to be a hit at your football party!!
What college football team do YOU cheer for?