While at Disney Social Media Moms, I learned about a whole new interactive gaming platform coming out from Disney this summer called Disney Infinity.  And, oh my goodness does it look so fantastically fun!! I’m not a huge gamer, but as a Disney fan and mom of young boys, I am super excited about this one! In fact, Disney Infinity is going to be the first game we buy just for the boys. They are going to love it!! 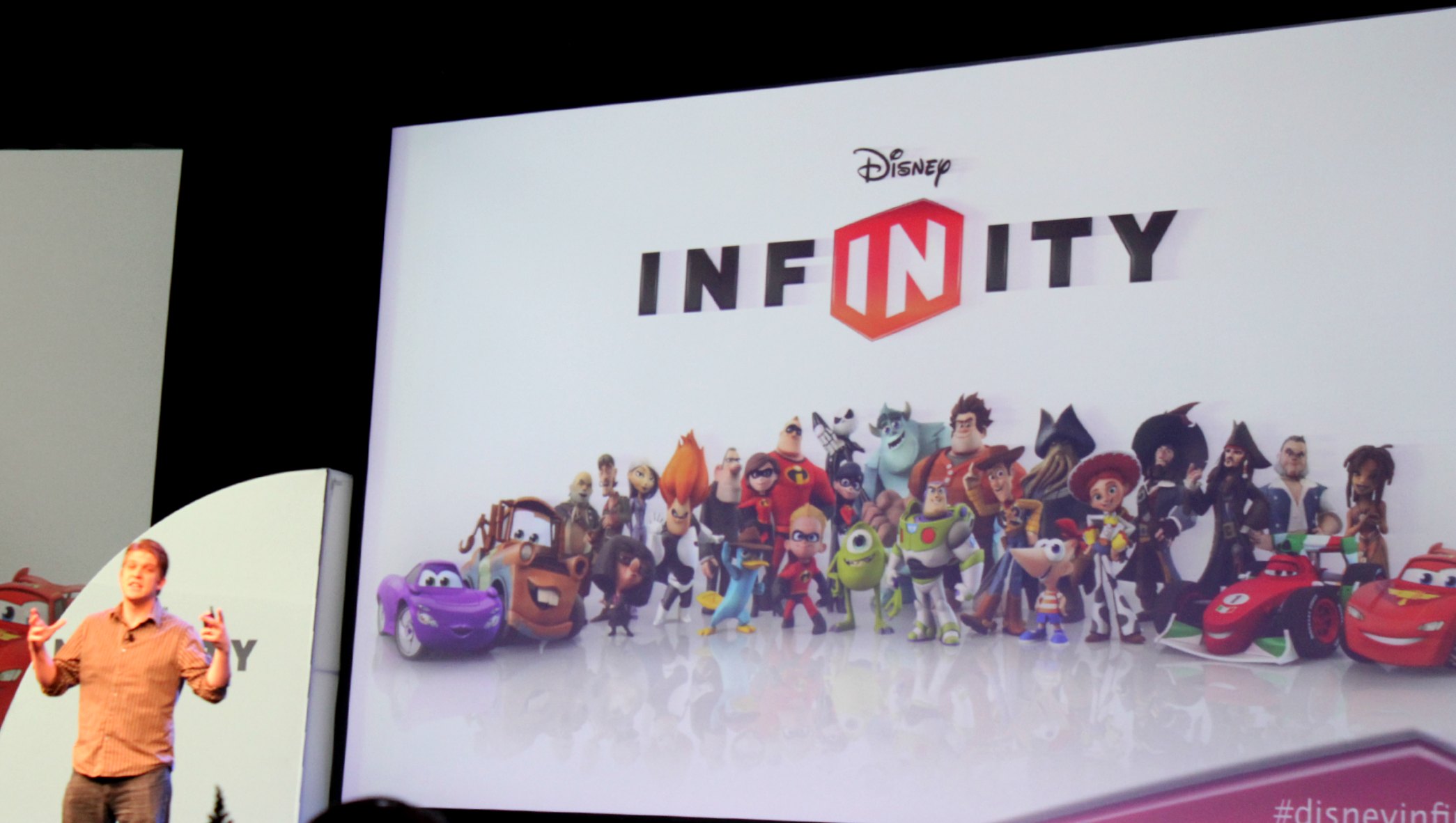 So, what exactly is Disney Infinity?

With Disney Infinity, Disney magic and storytelling come to life in a whole new interactive way that players actually get to help create.  Those stories will star beloved characters from Disney and Pixar, such as Lightening McQueen, Mater, Captain Jack Sparrow, Mike Wazowski, Mr. Incredible, and more!  Then, through the different Play Sets, you get to experience these characters in their worlds—like Monsters University or Pirates of the Caribbean! “No matter the Play Set, your adventure will always be different. Whether you are racing Cars around canyons, sailing the high seas with Pirates of the Caribbean or creeping around Monsters University campus, there will always be new worlds to discover… and endless fun!” – Disney Infinity website

How will Disney Infinity work?

Players will place physical, real-world figurine characters and power discs on the “Infinity Base” device to activate original story-driven adventures within the game. The figures actually store information, so they can be taken over to friend’s houses and pick up right where you left off. And, thankfully, Disney made it so the figures can be used interchangeably across all gaming systems. So, if one friend has a Wii and the other has an XBOX, there’s no issue!

Your real-world figures will come to life on the screen in a different “universe”.  Those “universes” are Play Sets, where you get to play in the characters’ worlds.  When the game first releases, you can expect four Play Sets – Monsters University, Pirates of the Caribbean, Cars, and The Incredibles (more Play Sets will likely release over time). 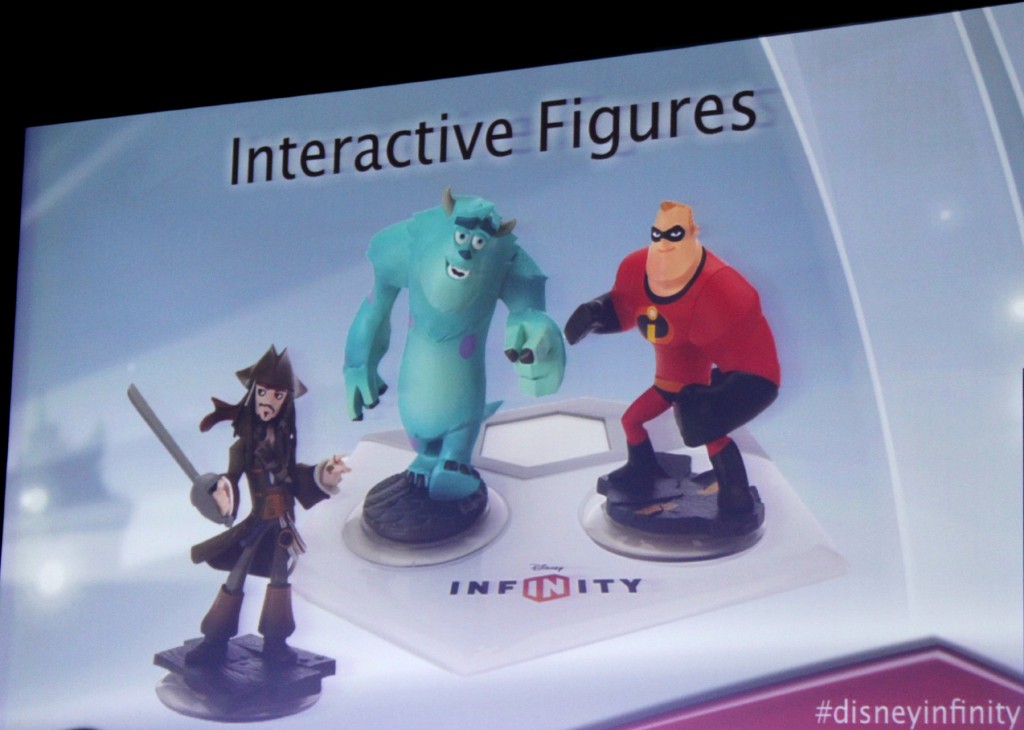 This new gaming platform will include something special called the “Toy Box”. During the story-driven game play, players can collect unique characters, vehicles, and gadgets from each world and save them to a virtual “Toy Box.” Then, using all these fun items gathered, players will be able to create their own unique adventures in their virtual Toy Box. 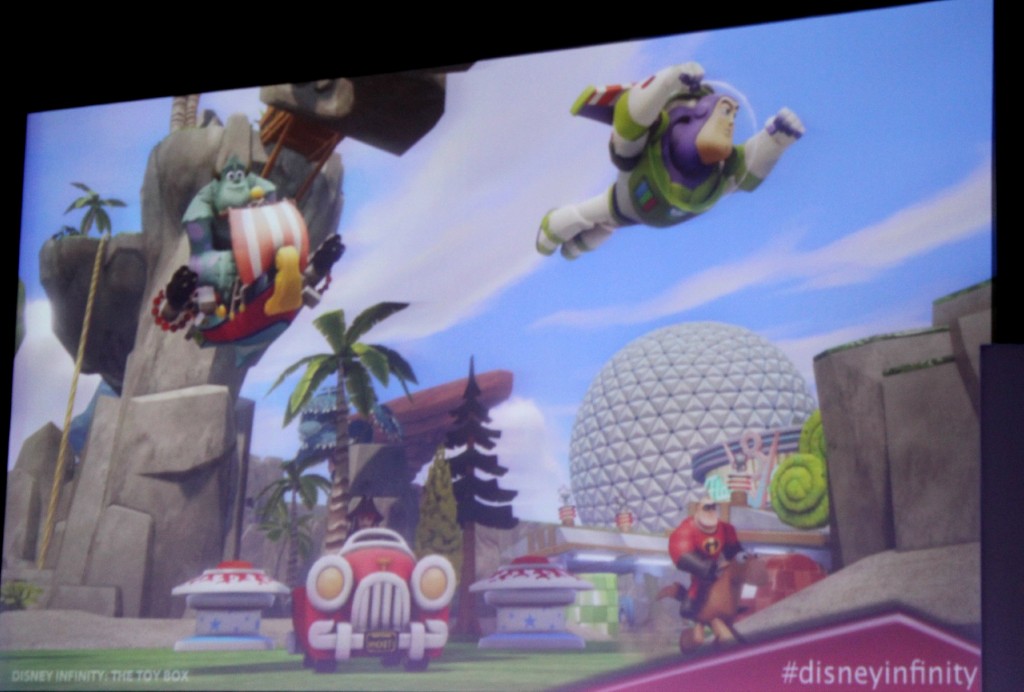 As part of this also, there is a great feature built in for kids interested in game design! There is an Intro to Game Design area. In that space, there is flexibility to create your own worlds. At the conference we were told that there will even be a way for players to share their designs with Disney! If they like it, they may just send it out for everyone to enjoy! How cool is that?! I LOVE this added feature for kids to explore their creativity and learning game design! 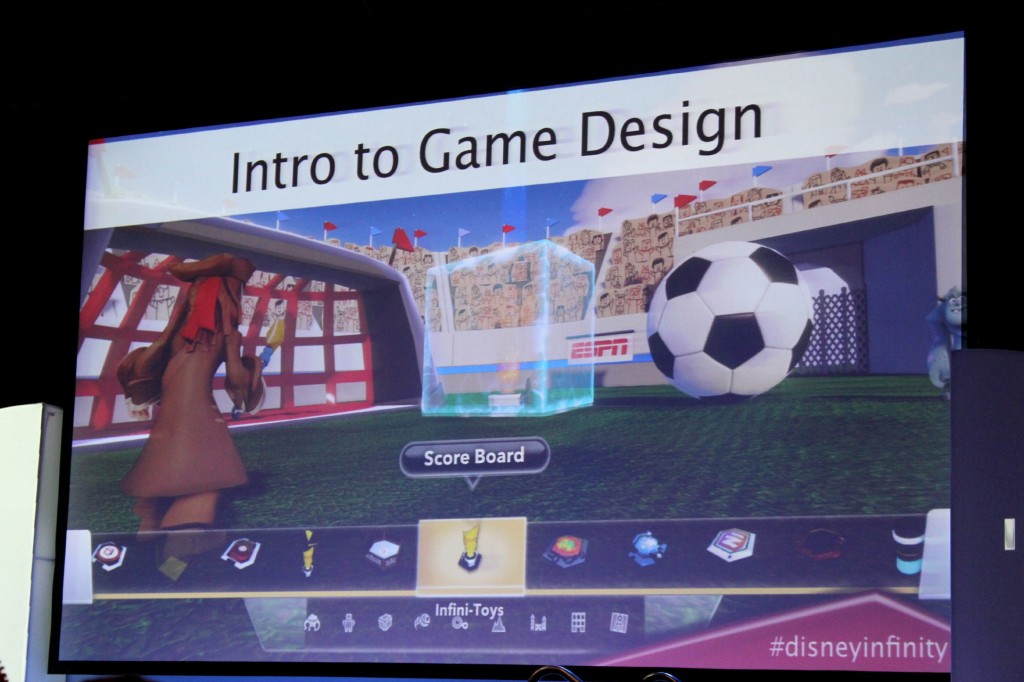 To enhance the game experience, Power Discs will be available (sold in blind packs). Power Discs will give extras like special powers and special gadgets, vehicles, and themes to use in the Toy Box area!

Where and when is Disney Infinity available?

That’s right, a group of Disney-loving bloggers got together to give you a chance to your own Disney Infinity Starter Pack!  Sweet!!!!

One lucky entrant will win a Disney Infinity Starter Pack, which includes the video game and Infinity base along with the first Infinity power disc. Characters included in this giveaway are Captain Jack, Sulley, Mr. Incredible, Mater, Francesco, Davy Jones, Syndrome, Randall, Mrs. Incredible, Mike Wozowski, Captain Barbossa, Lightning McQueen, and Sally. Gaming console is not included. Winner can choose which gaming platform they would like the Starter Pack to play on (Xbox 360, PS3, Wii, Wii U, or 3DS). Giveaway ends on July 31, 2013 at 11:59 pm Arizona time.

Use the Raf­fle­copter form below to sub­mit entries (give the form a minute to load if you don’t see it right away). Com­plete as many (or as few) tasks as you like. Full contest rules can be found at the bottom of the Rafflecopter widget. Good luck!
a Rafflecopter giveaway

Thanks to the following bloggers in helping to make this giveaway available to you! 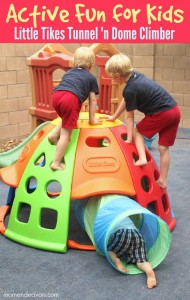 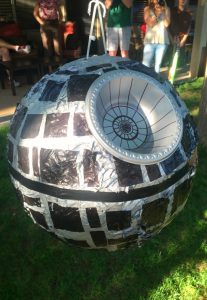 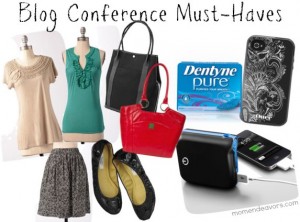