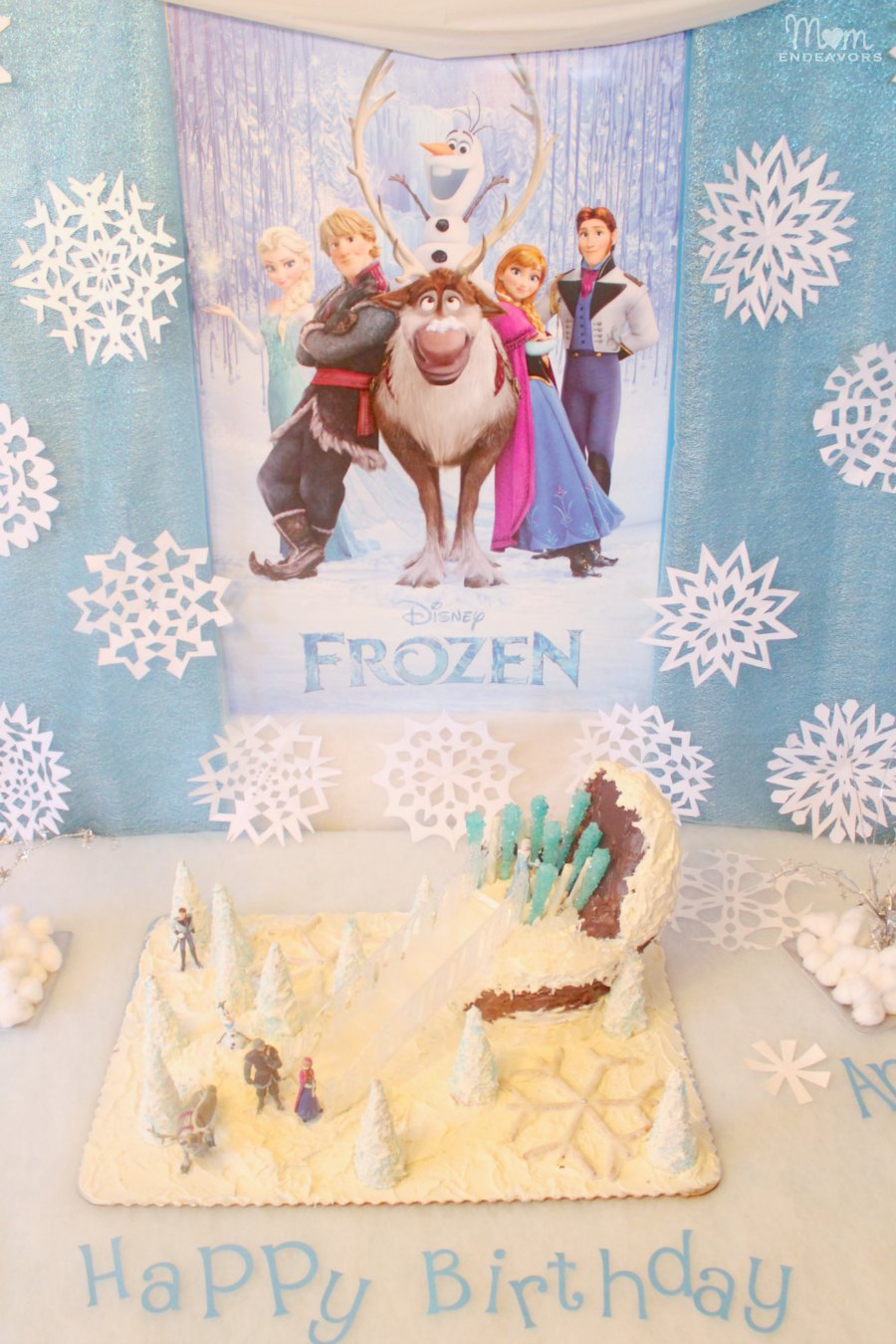 Our FROZEN birthday party recap post was already so long that I decided that our fun FROZEN party menu needed its own post. Making fun themed foods for parties is one of my favorite parts of party planning. Often times, with just a few clever names of regular old food items, you can have a whole themed food table (you can see other examples here with our pirate party food, witch’s potion dinner, and baby beluga party). For our FROZEN party, we did themed foods based on the characters and colors, with a little Scandinavian flair. 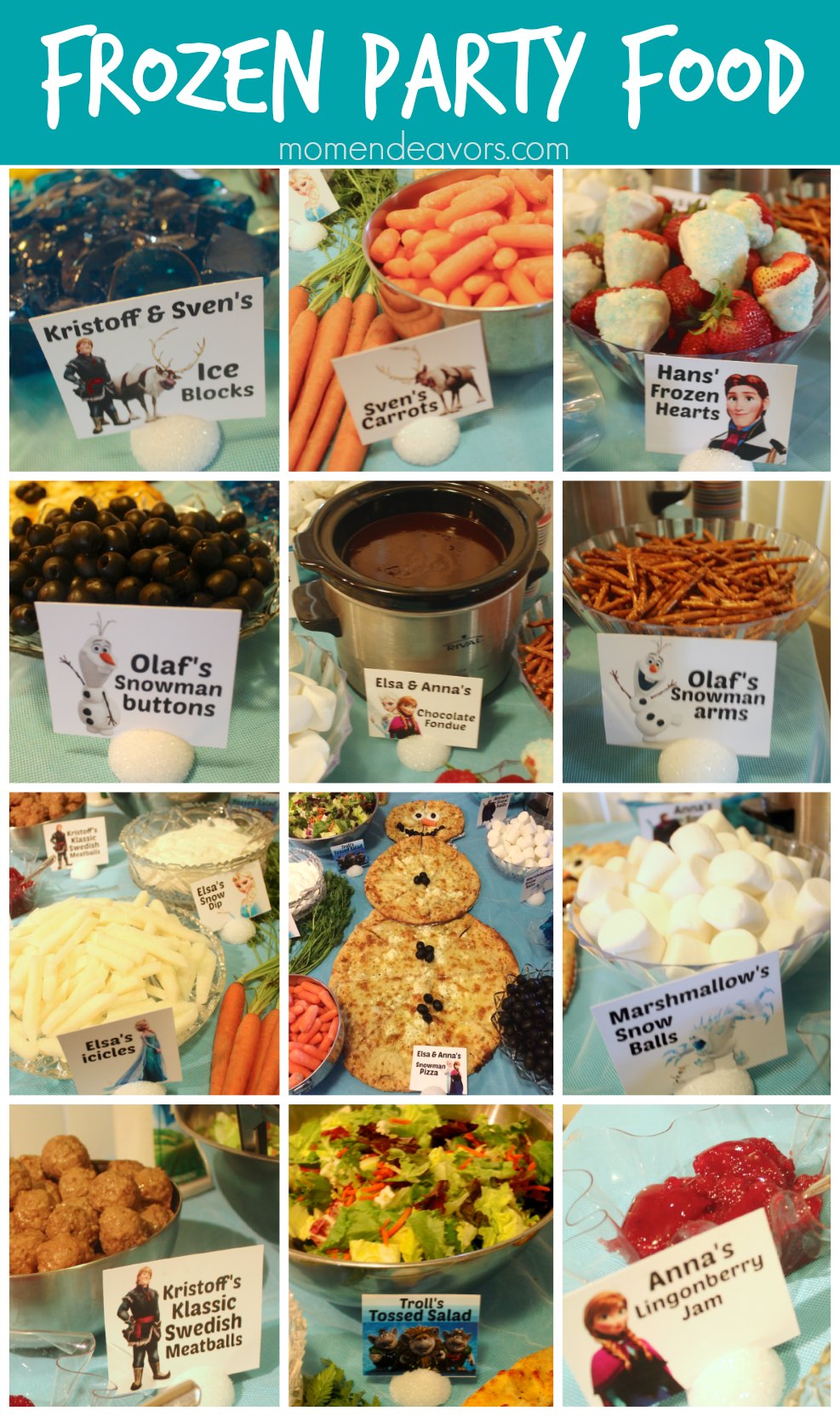 Overall, it was actually really fairly simple. But, the character themed names make it extra fun! Here’s the menu:

So, that was the main dinner food on the menu. For the Swedish meatballs, I bought a large bag at Sam’s Club and used 4 packets of the Swedish meatball sauce from IKEA. I mixed up the sauce according to the directions and combined everything in our crockpot. It was full to the brim! People could eat them with the lingonberry jam.

The snowman  is white pizza (a garlic cream sauce instead of red). A nearby local restaurant sells the delicious white pizza, so we bought a large, medium, and small. Stack the pizzas together, add some olives for buttons and the smile, a carrot nose, and a dollop of ranch with olives for the eyes…and you have a snowman pizza! 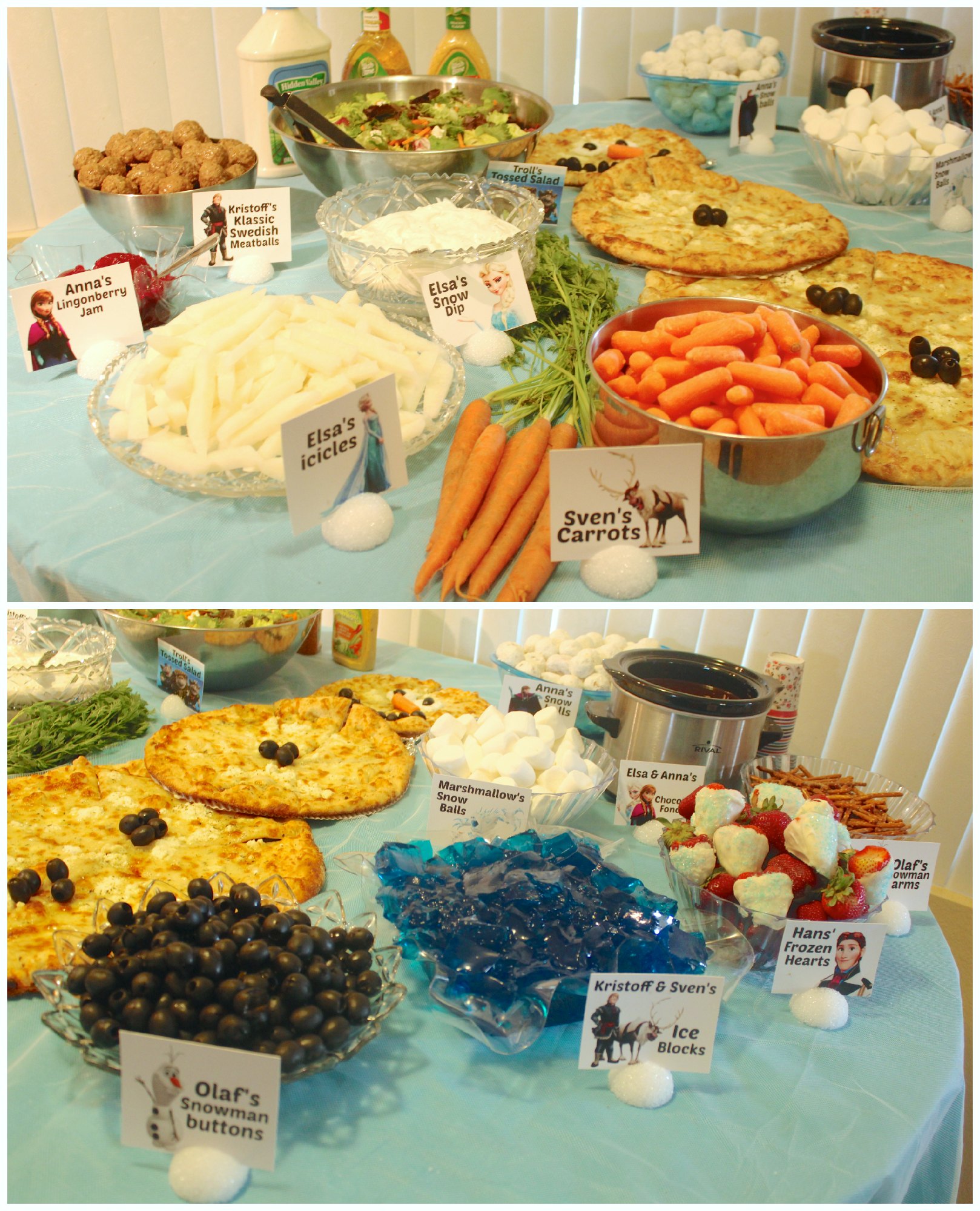 For drinks, we served up melted snow and “Aurora Borealis” punch (just like we did for the Baby Beluga party).  To make the punch, we used a large container of Blue Hawaiian punch, 1 bottle of Simply Lemonade, and 2 bottles of Sprite (or similar). With the addition of our light-up ice cubes, it resembled the Northern Lights a bit. Perfect for a FROZEN party! You can buy the light-up cubes at Amazon (*affiliate link) –>Litecubes® Flashing LED Multi-Color Freezable Ice Cubes. 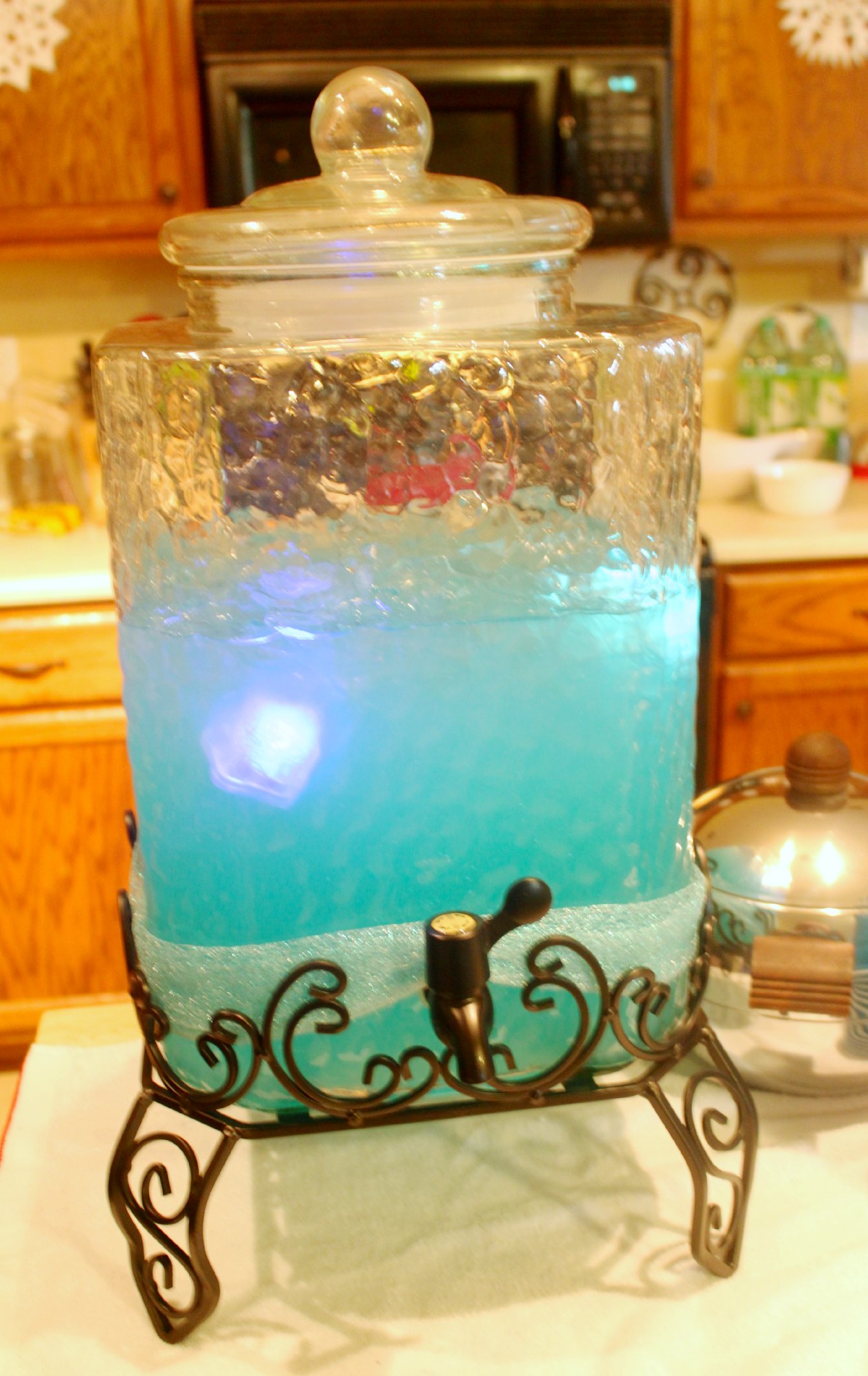 One of my favorite songs from the movie (because it’s just so catchy) is, “Love is an Open Door”. One line in the song (by Hans) is, “And maybe it’s the party talking or the chocolate fondue.” Combine that with Elsa & Anna’s love of chocolate and I decided that we HAD to have chocolate fondue for the party! 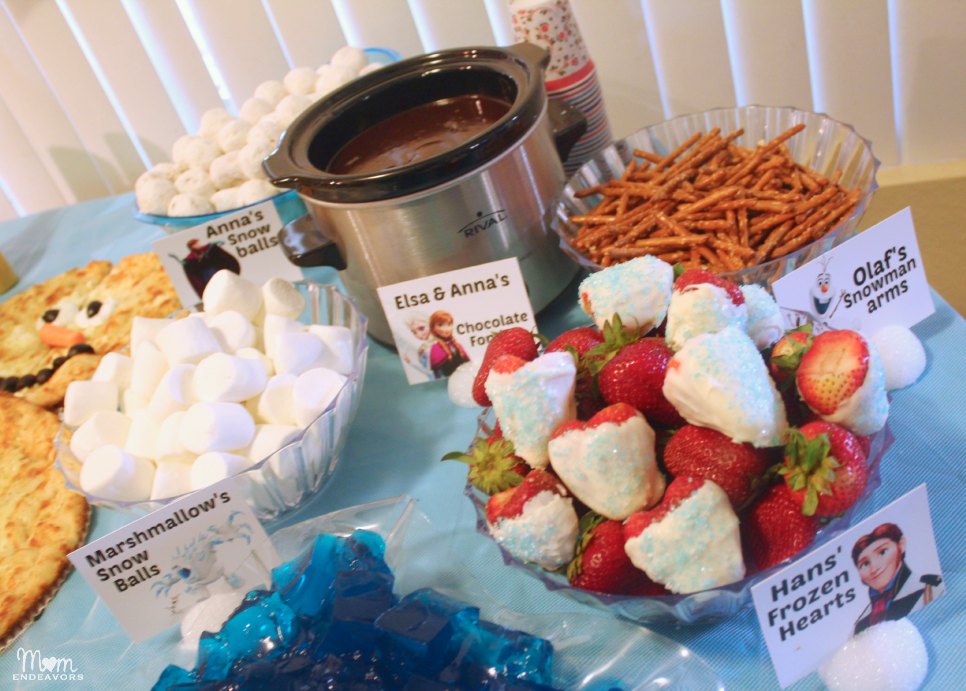 We made up a batch in the mini crock pot and served with some fun items to dip in the chocolate. So, here’s what we had for more desserty options:

I made the name cards using images of the characters found on-line. Then, they were stuck in “snow balls” to standup. For that, I purchased a package of small styrofoam balls (I’ve seen them at Walmart, as well as many craft stores) and cut each ball in half. Then, cut small slit on the rounded top edge to put the card in. Easy and fun!

And, last but not least, there was of course our FROZEN birthday cake. This really should get it’s own post sometime. The North Mountain didn’t turn out quite as well as I had envisioned it. But, the kids still all loved it! The trees are just frosted sugar cones with various sprinkles. And, the large snowflakes are “snowflake pretzels” (<– that’s a clickable link to get directions).

If you wanted another FROZEN-themed dessert, you could make this fun Elsa’s Icy Blue Dessert Trifle (<— click for the recipe)! 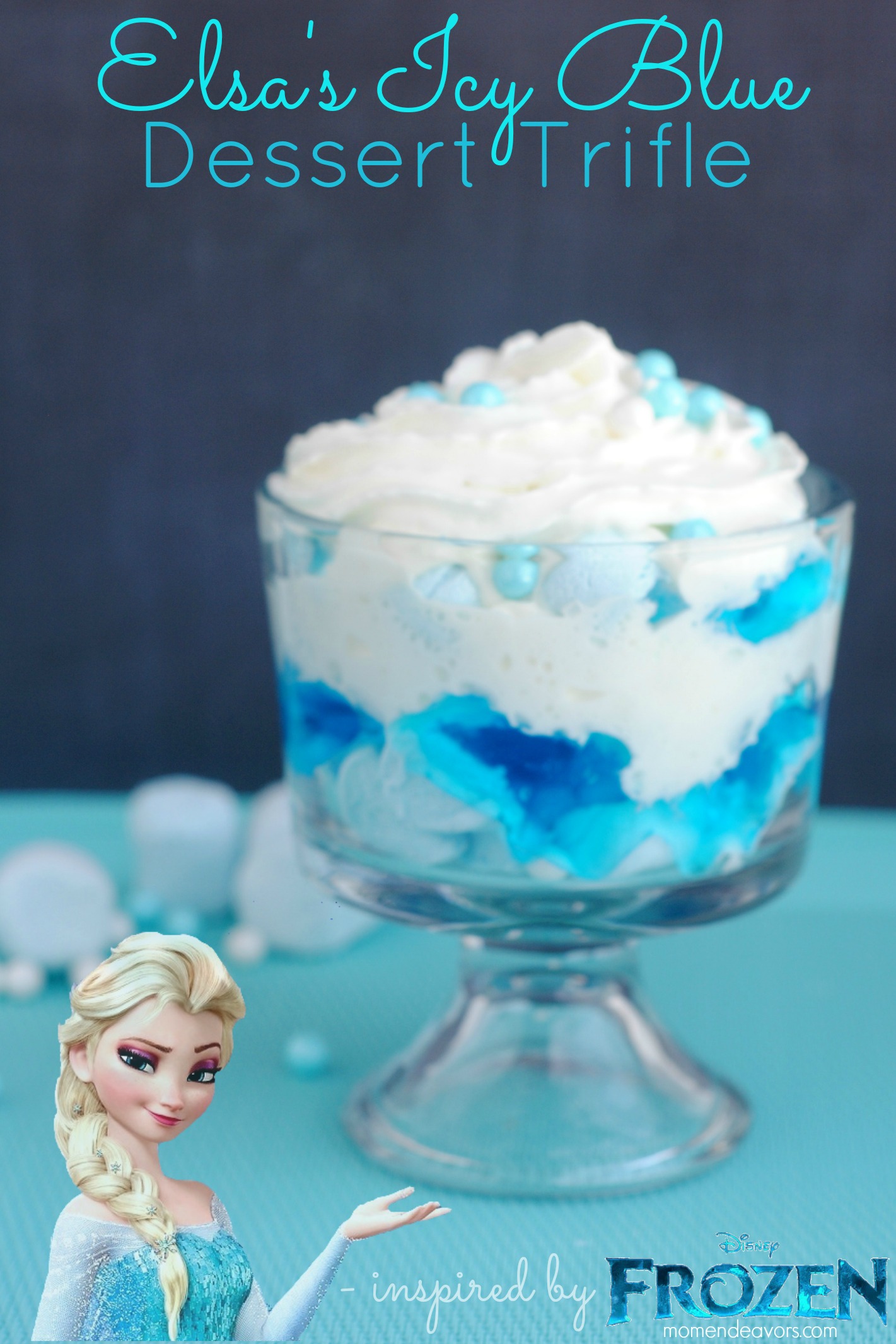 The foods were definitely a hit and helped make the party even more fun!

Related posts, party details, and inspi­ra­tion can be found here: