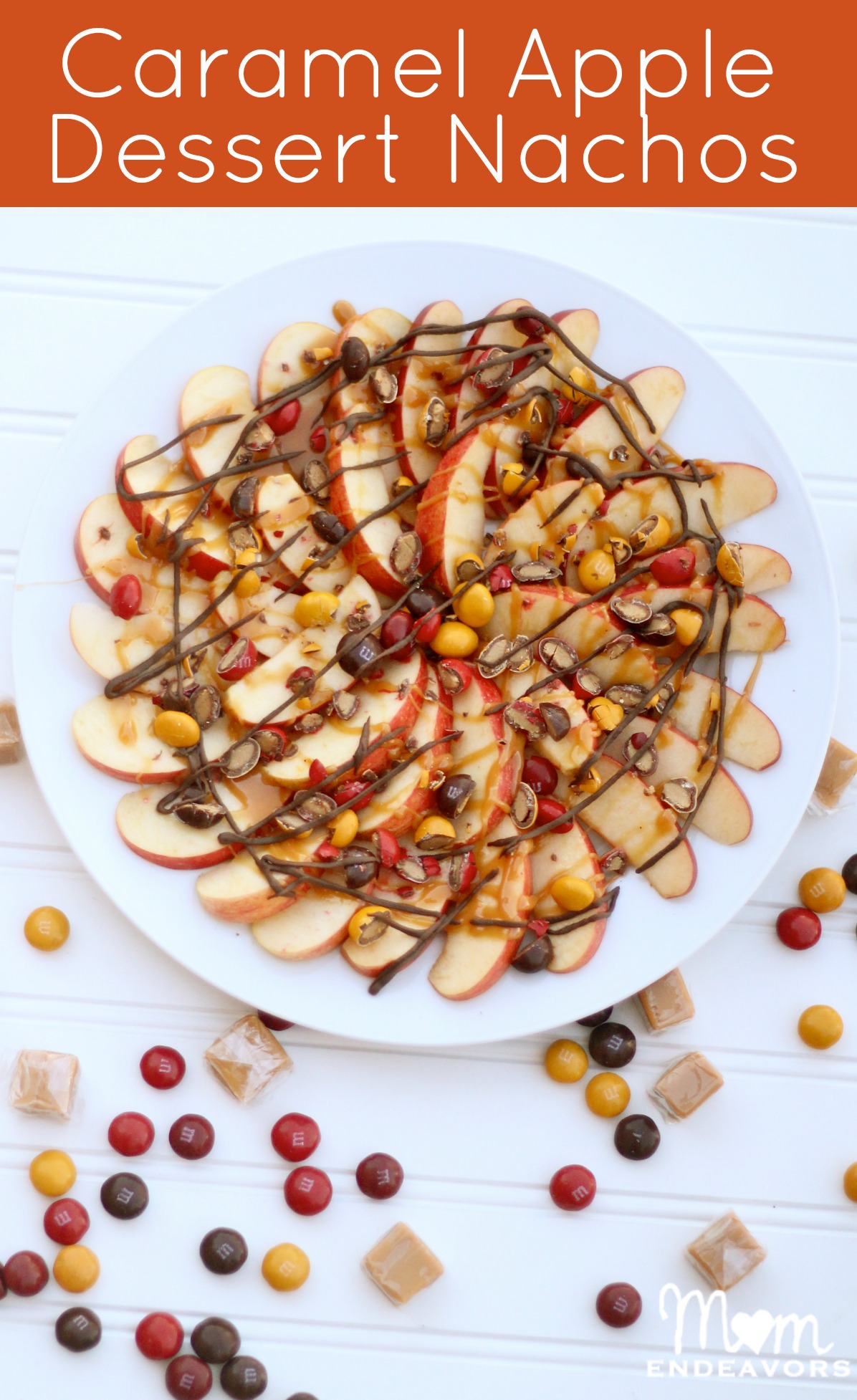 We love apples for a snack, especially this time of year! And, there are 3 things that pair great with apples – peanut butter, chocolate, and caramel. So, why not enjoy all 3 flavors together with the fall’s favorite fruit?! That’s exactly what we did with these apple nachos and they were SO so good!! 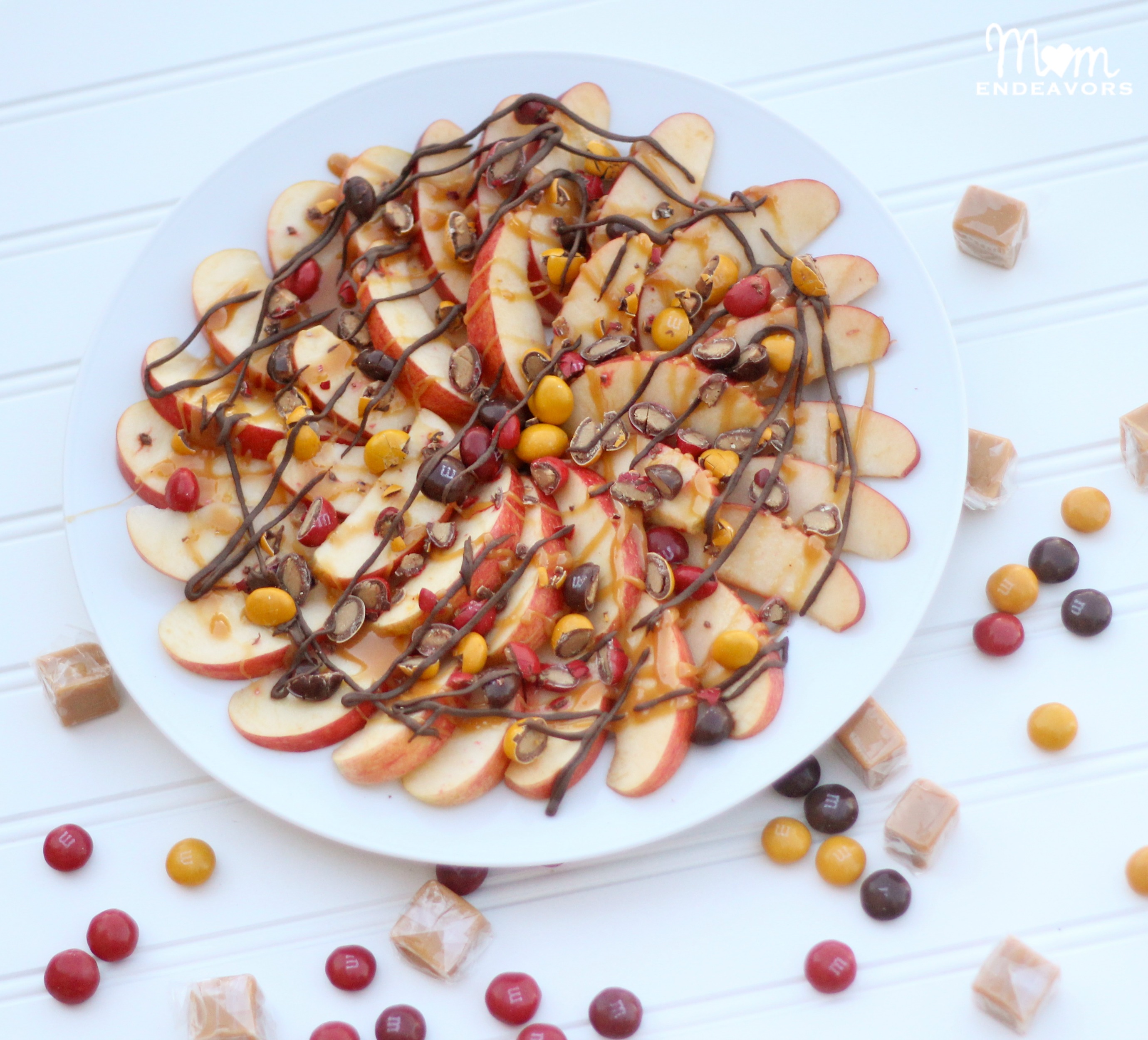 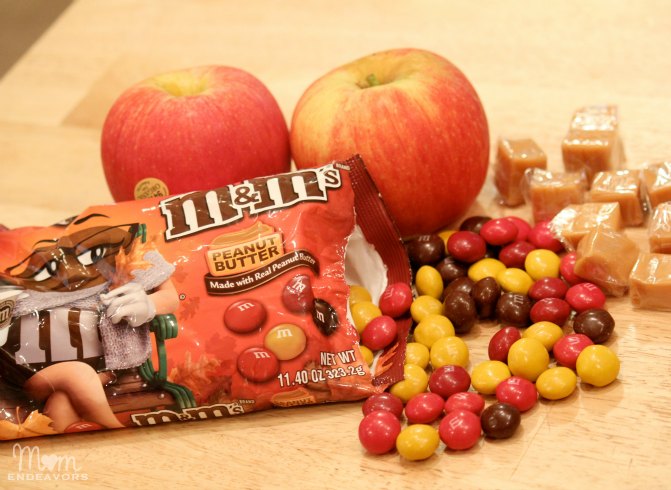 To make your apple nachos, start by cutting your washed apples into thin slices and arranging them on a large plate or platter. Then, melt some caramels (about 10 should be plenty for a good-sized plate) in the microwave. You could buy some pre-made caramel sauce, but I think this way is SO much tastier! Plus, it sets up and hardens a bit in a way that the sauce doesn’t do. While that melts, chop of the fall M&M’s. 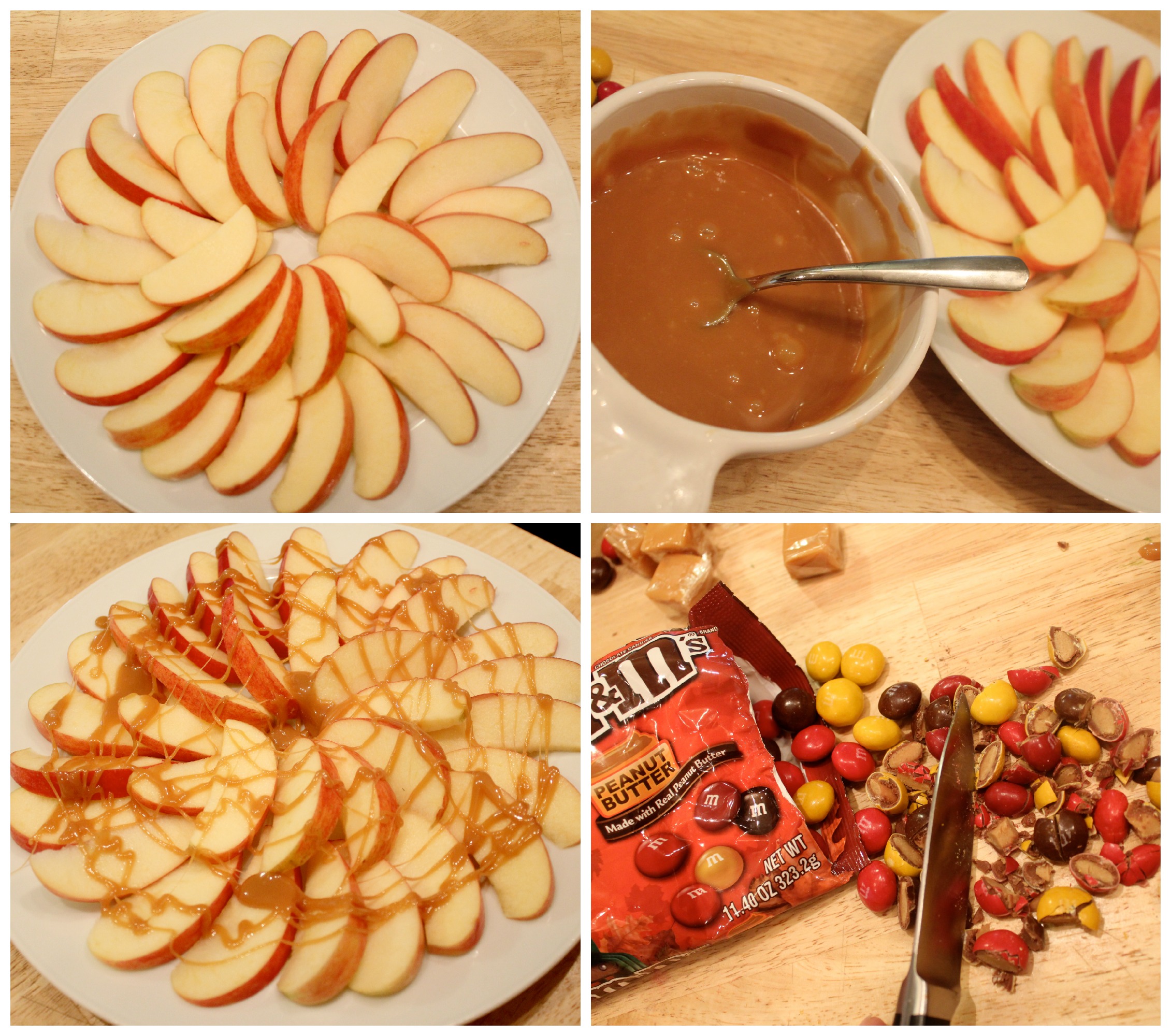 Then, drizzle the caramel over the apples and add the M&M’s. For some added “fancy”, you can also drizzle some melted baker’s chocolate (or chocolate candy bark) over everything!  You really can whip this fall treat up in less than 10 minutes and the results are SO good!! 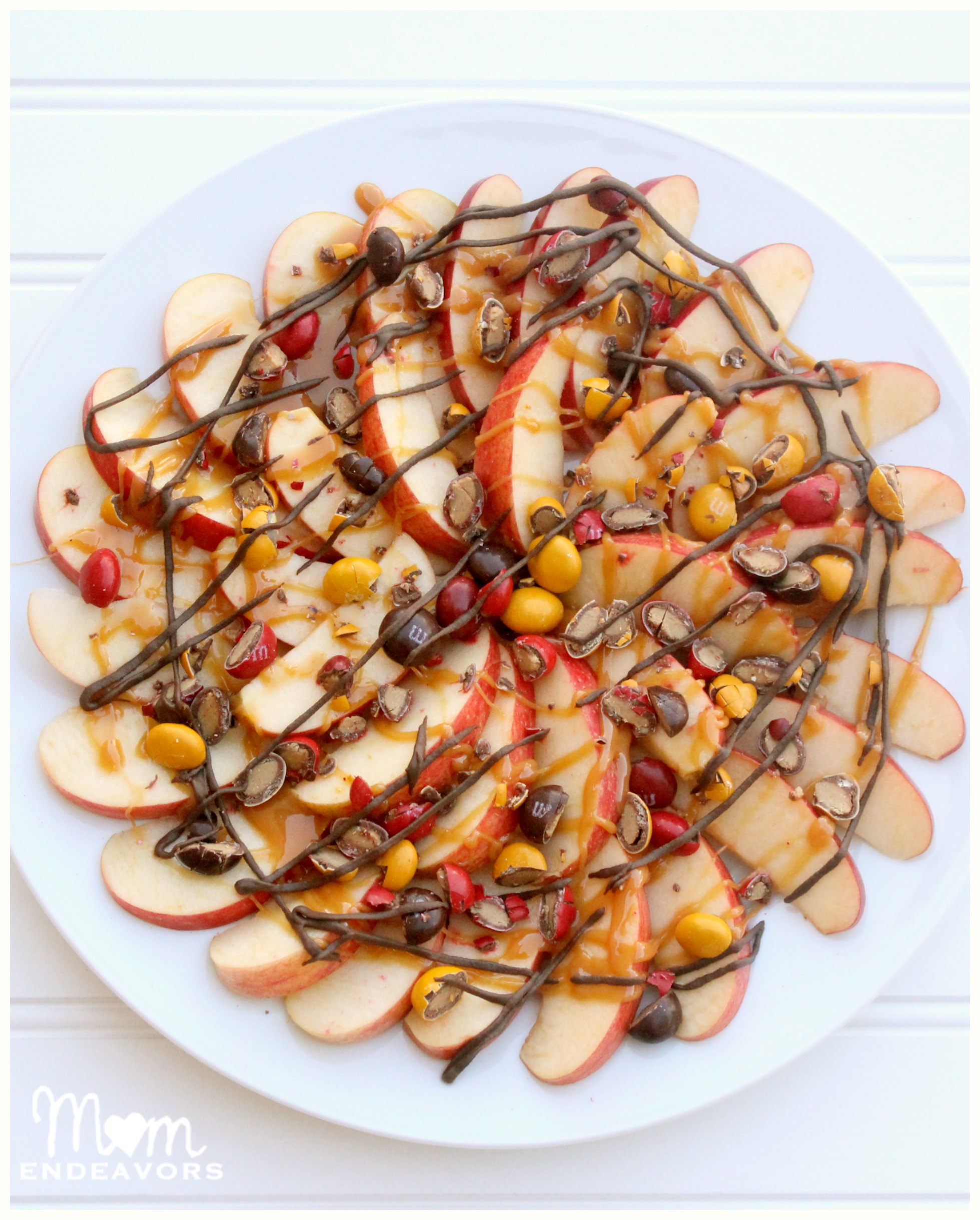 Not sure if nachos are your thing? Or wanting yet another fun way to eat apples? Then, how about some fun apple cider dip? It’s a fun twist on apple cider that also makes a great snack or dessert! 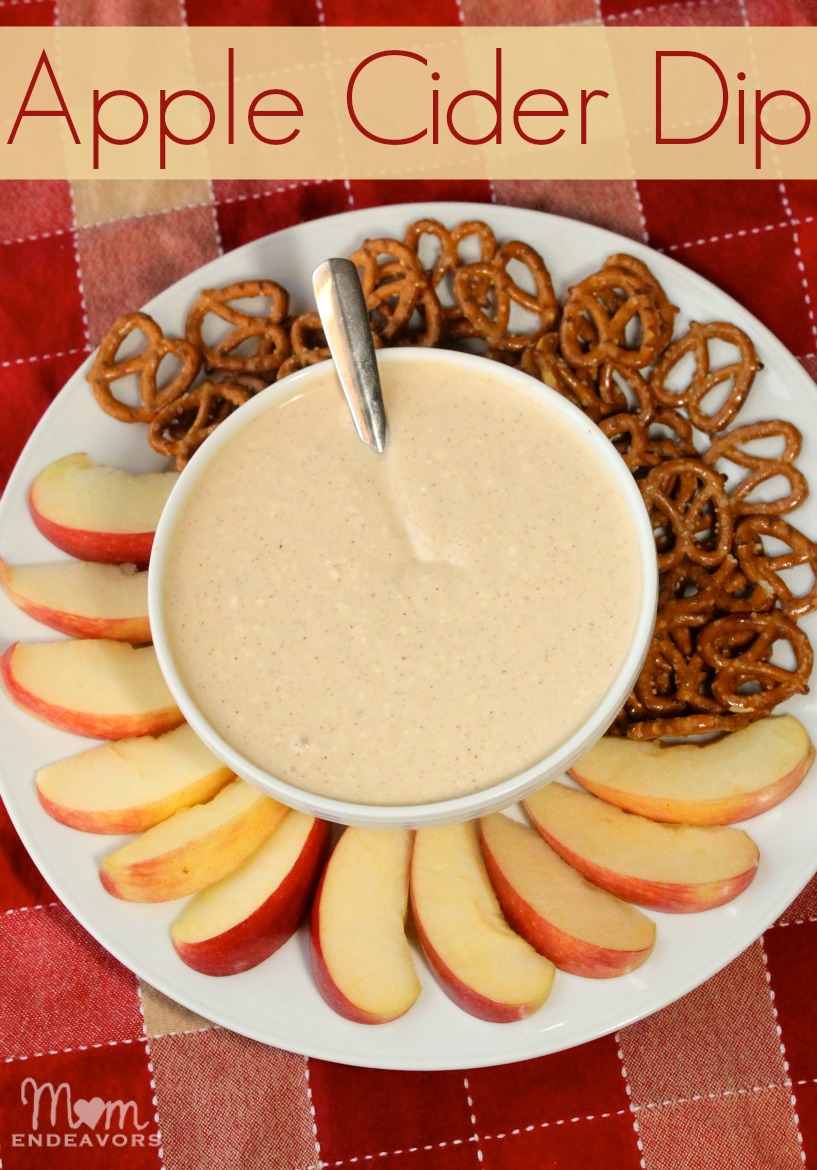 Making the dip was a little more involved than the nachos, but that’s basically due to the cooking time. But, it’s worth it because your house will smell amazing! Really, I don’t know what it is about the smell of cooking apples & cinnamon, but it’s heavenly. So, here’s what you” need to make the dip: 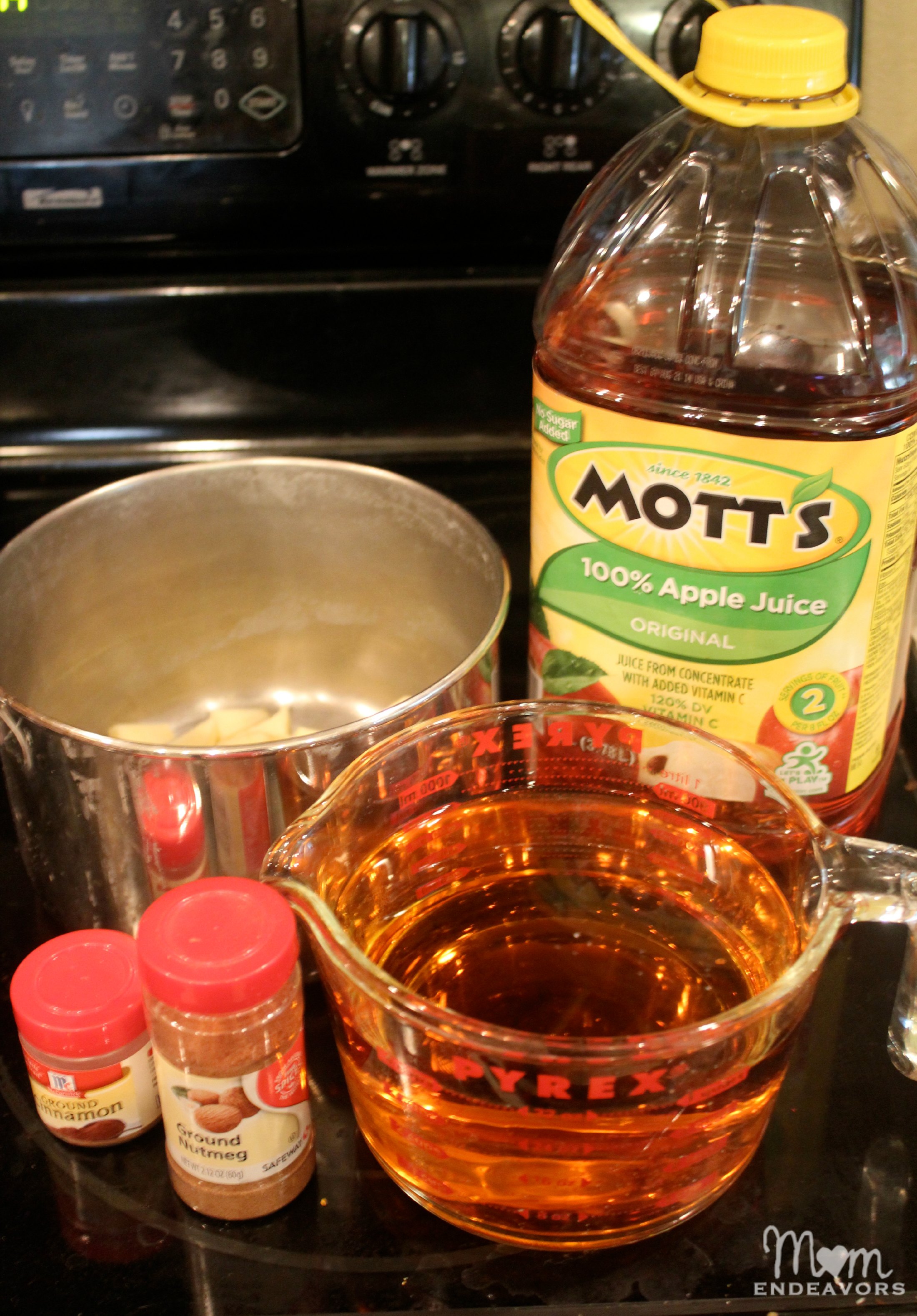 You’ll start off by combining your apple juice, 1 tsp. cinnamon, nutmeg, lemon juice (and diced apples if using) in a pot & bring it to a rapid boil. Once boiling, reduce heat to a low boil/simmer and let it cook down until you’re left with only about a cup of apple cider. At that point, combine corn starch with a bit of water to until not lumpy & stir it in to the remaining cider (to thicken it). 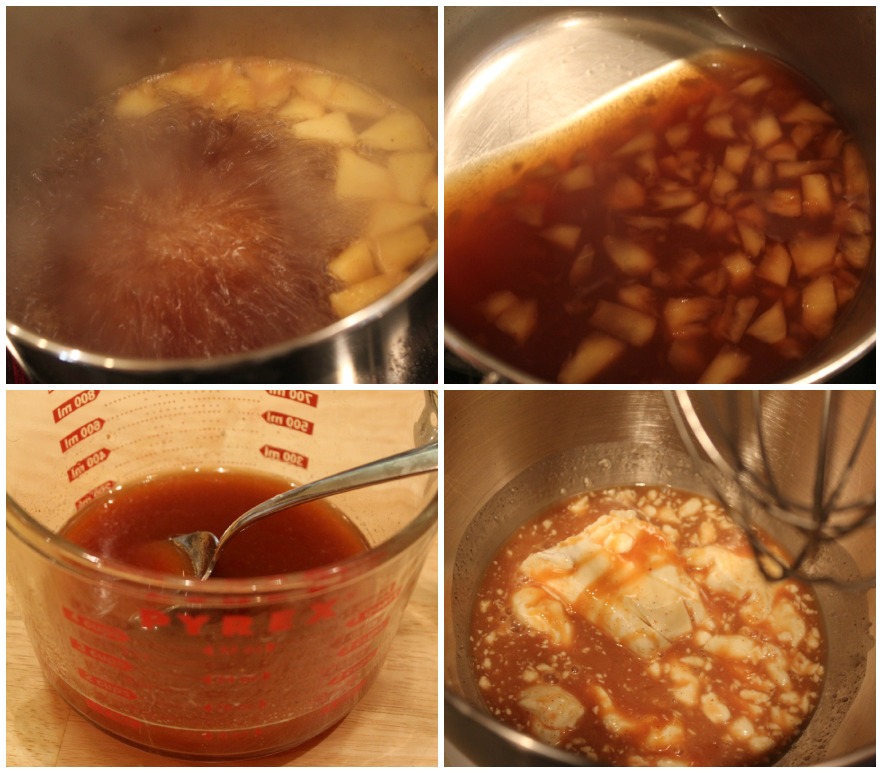 Then, cream together the softened cream cheese (the softer it is, the less lumpy the dip will be), the apple cider, 1 tsp. cinnamon, and caramel. Once everything is well-combined, put it in a dish in the fridge. I actually recommend making this the night before/day before when you want to serve it as it really does taste better the second day! Serve cold with apple slices, pretzels, graham crackers, or homemade baked cinnamon sugar tortilla chips! YUM!! 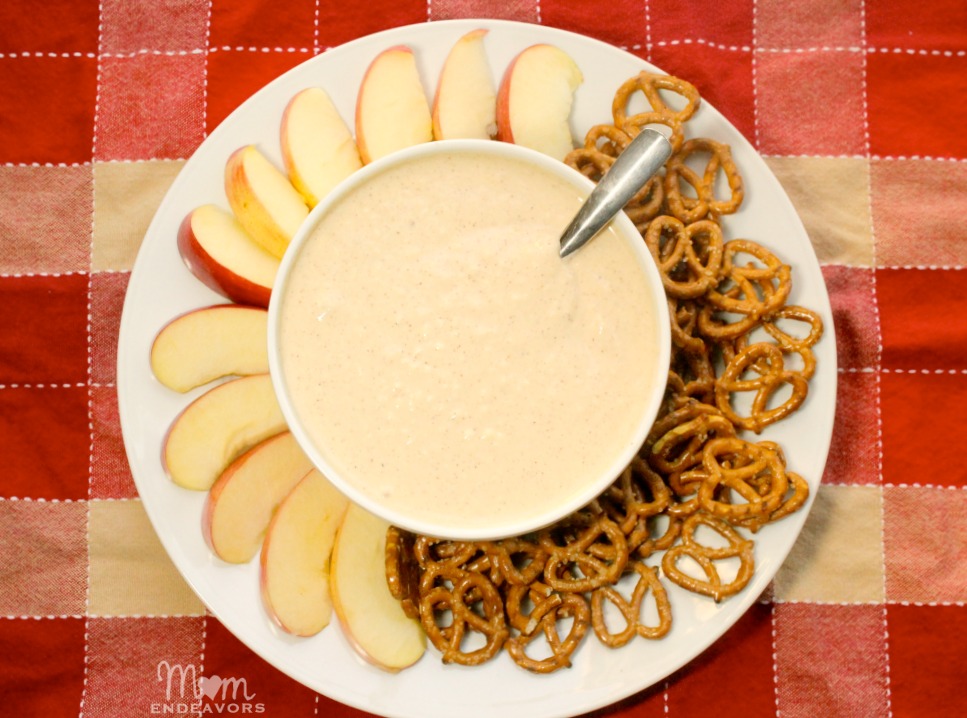 What are YOUR favorite ways to eat apples in the fall?

And, for more great fall ideas & recipes visit the Fall Baking and Entertaining Pinterest Board.