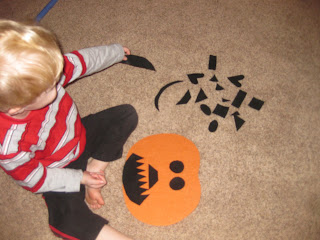 This build a jack ‘o lantern activity is so easy to make and has so many extensions!
To make your very own build a jack o’ lantern (alternately titled, “Mr. Pumpkin Head”), you’ll need:
-one 9 x 12 sheet of orange felt (I chose “stiffened” just so it would have some extra support)
-one 9 x 12 sheet of black felt
-scissors
To make:
-cut out a pumpkin shape from the orange felt
-cut out various shapes from the black felt (as many as you’d like) 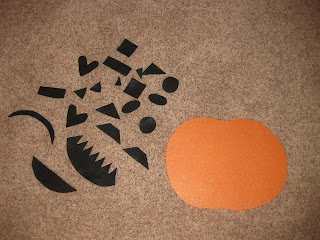 Since we are working on shapes with Big Brother, I chose to do two of each of the following:
circle, square, rectangle, heart, oval, trapezoid, and 3 different sizes of triangles.  By doing two of each of the shapes, you can do matching activities as you put the face on Mr. Pumpkin Head.
Also, I cut out a few different larger “shapes” to be used as mouths.  I made them all slightly different styles–by doing this, you can work on reading emotions.  Big Brother picked up right away on the “scary/angry” mouth!
With all those fun shapes and mouths, the various creative possibilities for building a jack ‘o lantern are nearly endless! 🙂 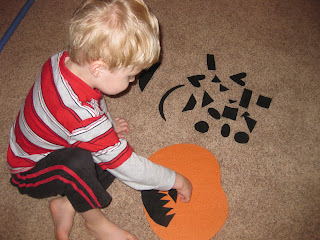 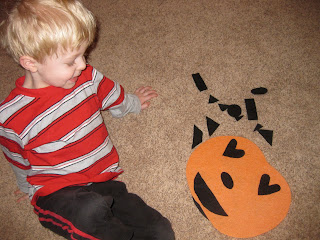 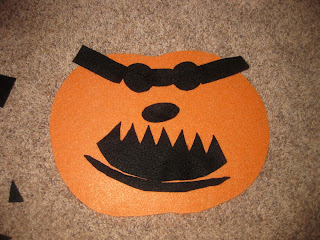 With a little bit of extra time, you could turn your “build a jack-‘o-lantern” into a really cool matching game as Jamie did at the Crafting Chicks! 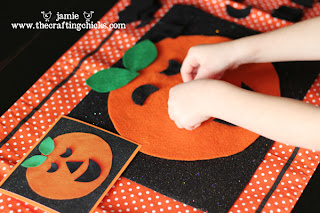 Very cool idea, taking just the idea of matching shapes one step further by recreating the picture!  This might be on next year’s to-do list–the Mr. Pumpkin Head Matching Game! So creative!