Wow! I can’t believe Baby Brother is over a month old already.  It seems like a blur, but I guess that’s what happens when you’re on newborn schedule! 🙂 The month has been spent adjusting, dealing with nursing issues, going to numerous doctor’s appointments, enjoying visits from a few friends and family members, and snuggling a really sleepy newborn. 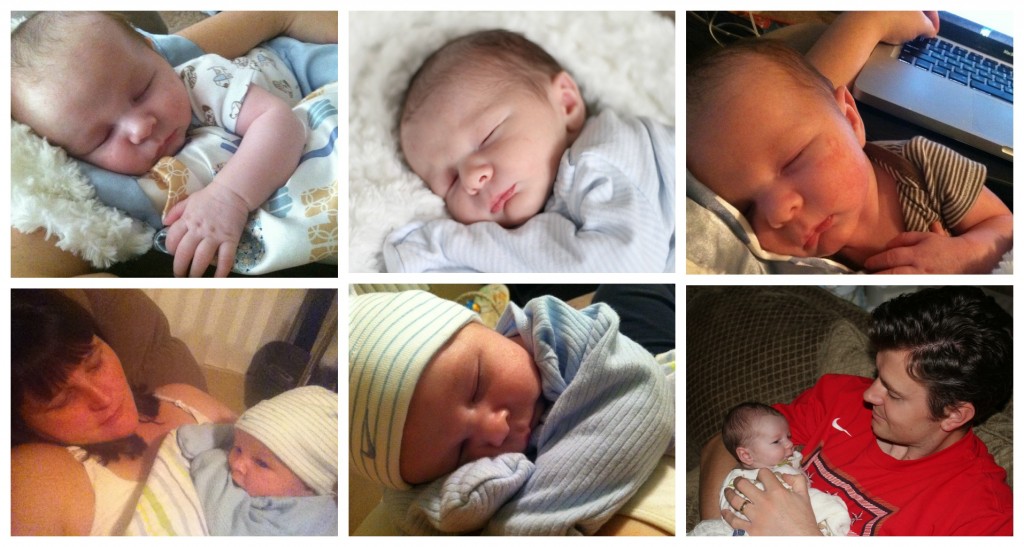 With all my breastfeeding difficulties, we were really focused on making sure that it goes as well as it possibly can. And, things just weren’t going well. His latch was terrible and he wouldn’t nurse long. I was frustrated and in pain (not to mention had almost no supply). So, at 5 days old, we headed to a visit with the lactation consultant (who is also a pediatrician) I had seen right before he was born. She thought his palate was really high & he was somewhat tongue-tied (both of which make latching on & nursing difficult). So, she referred us to a pediatrician who specializes in an electrocautery tongue-tie procedure on babies for the purpose of bettering breastfeeding. By that appointment (at a week old), he was down to 6 pounds even. He seemed to have difficulty even latching on to bottles. So, we went through with the procedure and it immediately made a noticeable difference. One week later (at his 2-week well-check), he had finally surpassed his birth weight and was up to 6lbs. 13oz. Another week or so after that (at his tongue-tie procedure follow-up), he was up to 8 pounds even! Packing on the pounds! 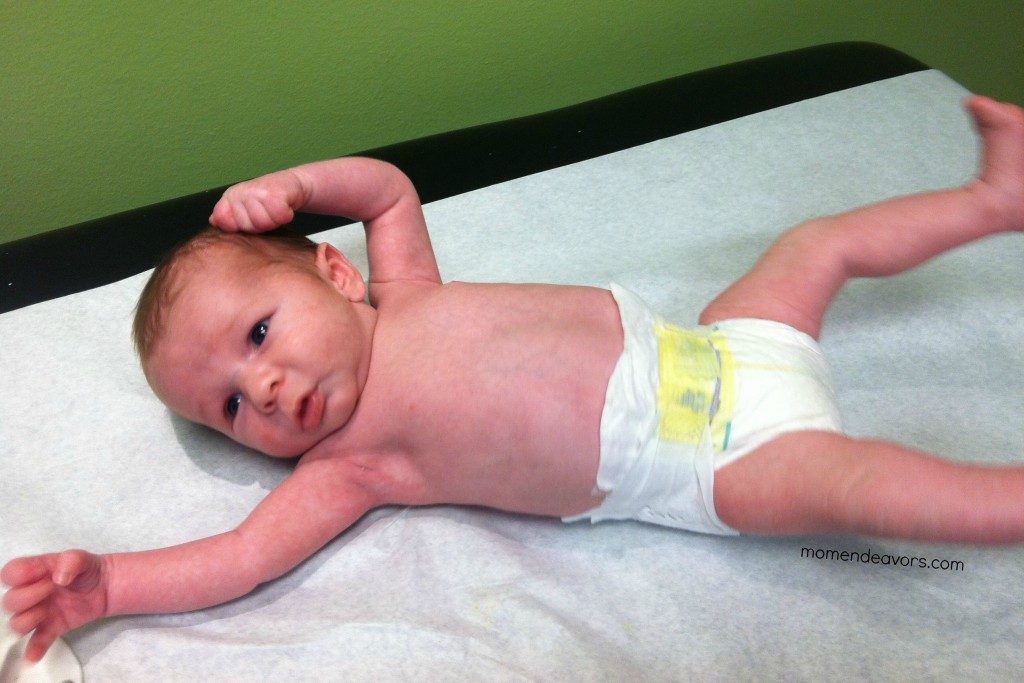 And, basically, that’s what we spent our first month doing. Pretty much just snuggling, eating, and lots of sleeping on his part. Perhaps I’m just not remembering with the other two, but Baby Brother seems to be far more sleepy a baby than the older guys! He’s definitely not sleeping through the night or anything. But, he’s had very few awake times and is quite a bit sleepier throughout the day. Maybe a product of coming two weeks early? I don’t know. But, now that we’re at the one month stage, he’s finally having some awake periods and is already SO much noticeably bigger!

For monthly photoshoots, we started using a bit of an unconventional stuffed animal when Big Brother was a baby–a large crocodile! It’s certainly not the best photography prop, but since I used it for both the other boys, we’re using it again! I happened to take Big Brother’s & Little Brother’s one month shots in the same outfit (which isn’t the best for photographs either), so Baby Brother wore it too! Nothing great from a photography perspective, but I love having them side-by-side for comparison. So fun! 🙂

Baby Brother must have known I was going to compare the shots– just look at him stretching out as far as he can in an effort to look bigger! 😉 And, here’s proof of what a sleepy guy he’s been. I picked him up & laid him on the ground for these shots and stayed sleeping for a few minutes. 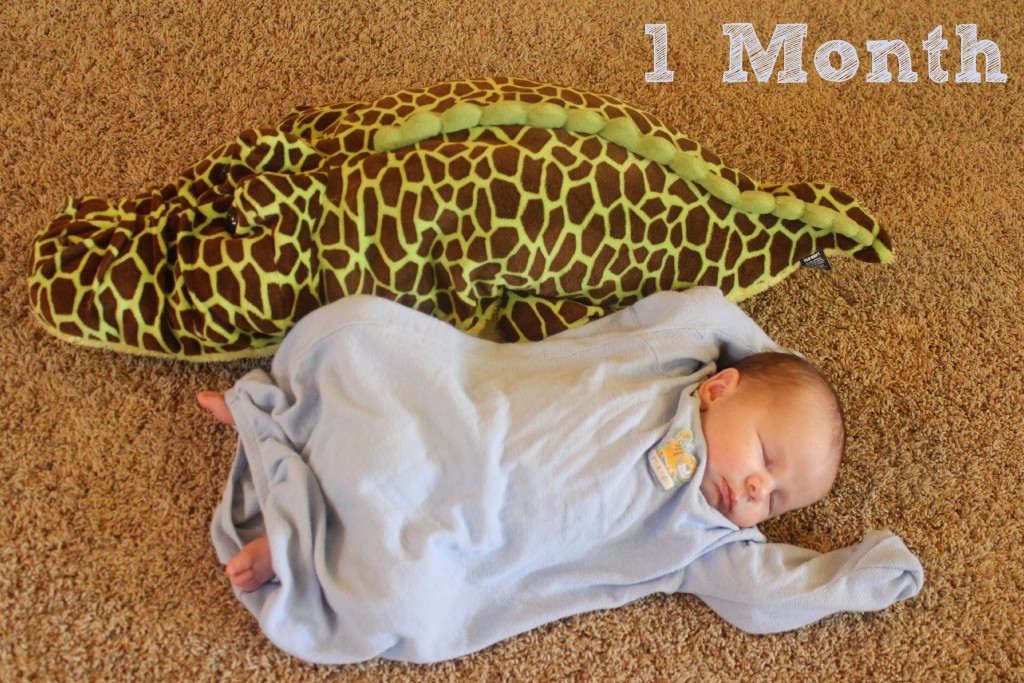 But, he did indeed finally wake up and stretch out! You can see how he still has plenty of growing to do before he filling out that sleeping gown! Much different than Little Brother! 🙂 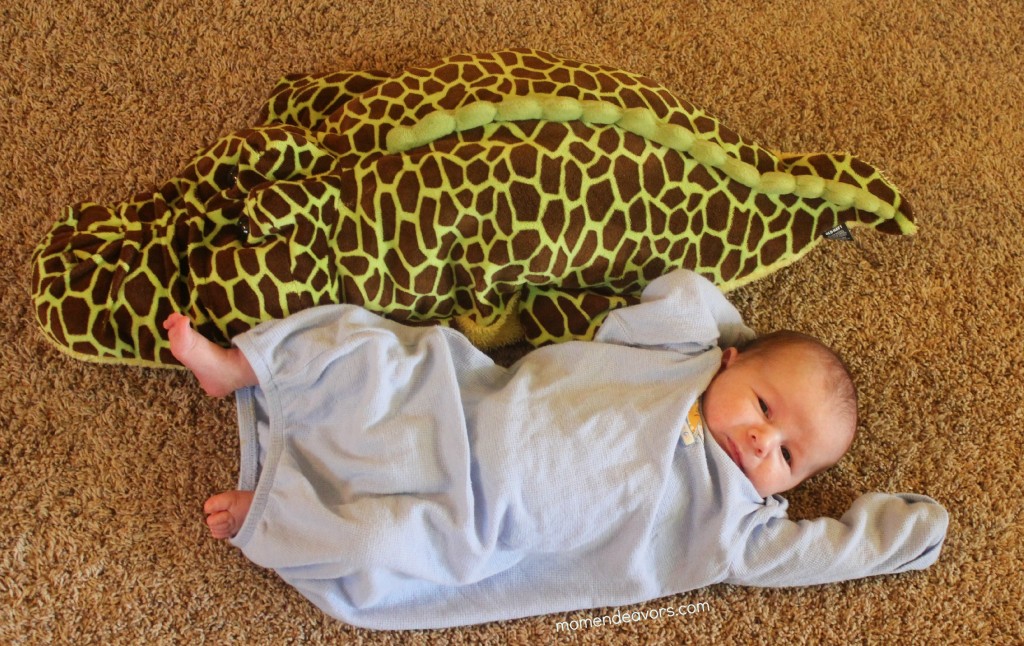 And, last but certainly not least on the picture front, each month with Little Brother I tried to get at least one shot with Big Brother in it too! They turned out darling each month and made for some great size comparisons! So, I’m hoping it will work out the same way with Baby Brother–though trying to get a decent shot of 3 squirmy boys is certainly tough! We’ll see how it goes. But, at least we have something for month one! 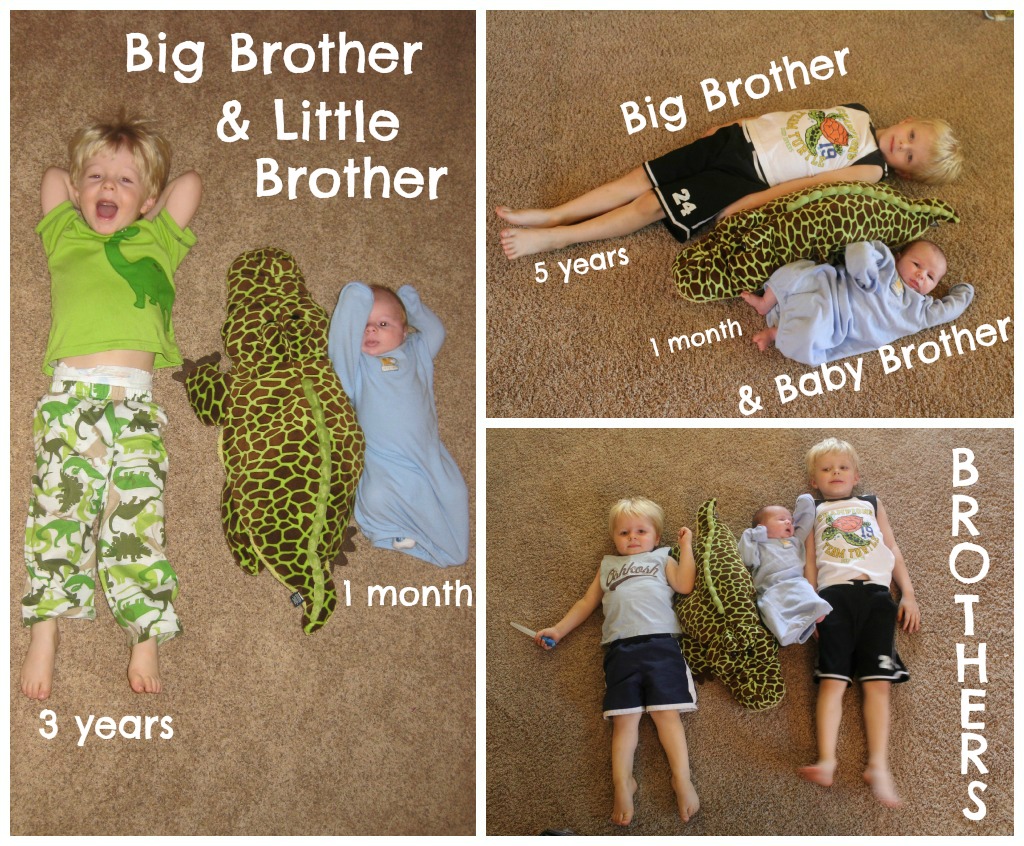 I’m hoping we’ll find our groove this next month and be rewarded with some awesome baby smiles. There have been glimmers of what look like some smiling this week! So, I’m getting excited for that!