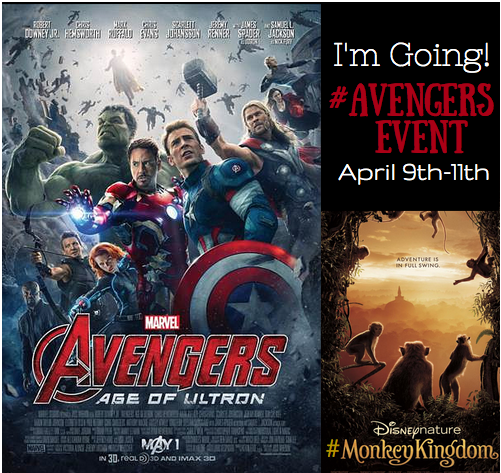 Avengers assemble!! Are you excited for the new Avengers movie (that hits theaters on May 1st)?! We are!! And, I may be a wee bit (ok, A LOT bit) extra excited for this one as I’ll be headed to LA in a few days for a special Disney/Marvel press event! And, we kick off the entire trip by getting an advanced screening of Avengers: Age of Ultron!! Here’s the trailer in case you haven’t seen it!

Looks intense (and so good)!!! Then, after screening the film, we’ll be interviewing an amazing lineup of MARVEL cast members! Check it out… 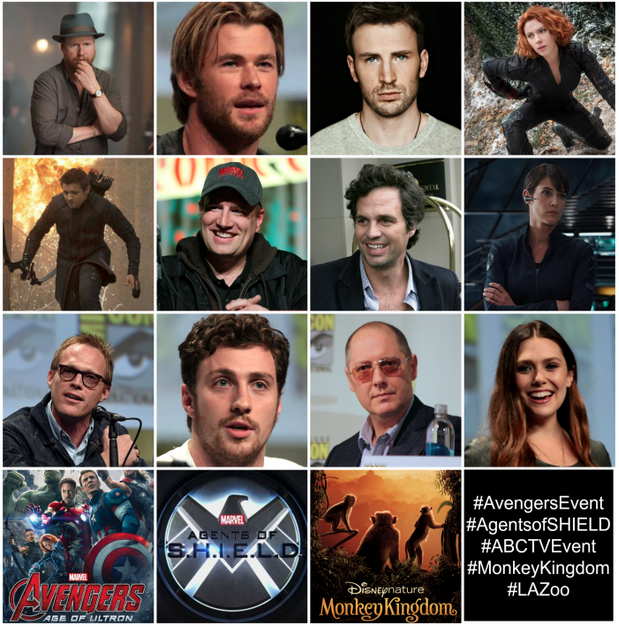 WHOA! Talk about a fun lineup of celebrities!! I can’t even believe it! What questions do you have for them?!?!

In addition to all that #AgeofUltron fun, we will be doing a rare Marvel Agents of S.H.I.E.L.D set visit!! All kinds of super hero fun! Then, we’ll also be having some #MonkeyKingdom fun! Monkey Kingdom (which hits theaters on April 17th) is the latest from Disneynature. And, as a former high school biology teacher, I LOVE the Disneynature movies!! We get an early screening of the movie and then we’ll be taking a private tour of the LA Zoo!

So, I would LOVE to have join me on this once in a lifetime adventure! You can follow along in real time (April 9th-11th) by staying tuned to my Instagram, Twitter, and Facebook feeds! In addition, you can join all the 24 bloggers who will be attending by following the following hashtags over the social media outlets as well: #AvengersEvent, #AgeOfUltron, #AgentsofSHIELD, #MonkeyKingdom, and #LAZoo. You can bet that I’ll be sharing TONS of pictures from all the amazing things going on!

What questions do you have for the Avengers cast???

Disclosure: Disney is hosting me in LA in order to attend the film screenings and to participate in group interviews & media events. As always, all opinions, experiences, and love of Disney are entirely my own!