Are your kids Wild Kratts’ fans?! It’s our favorite show around here–perfect for the kiddos of two animal-loving, biology nerd parents like us (I was a high school biology teacher before going on leave with the kids)! 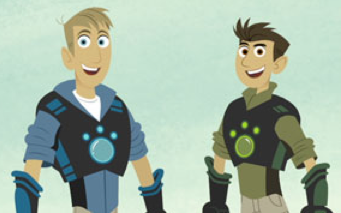 For those that aren’t familiar, it’s a great show on PBS Kids all about animals and their unique creature powers! It’s geared toward early elementary kids and from both a science education and animation perspective, it’s fabulous!!!


With the boys’ birthdays only one day apart, there was no question that we were going to do another joint birthday party (just like last year’s train party). The issue was just figuring out the theme. We debated a few different ideas and then the idea for a Wild Kratts party happened! It seemed like SUCH the perfect theme, not only for the animals, but also that the show features two brothers! How cute is that for a joint brothers’ birthday party?! And, Big Brother was ecstatic!  In fact, when I presented the idea to him, he said, “Oh yah, Mom! That’s exactly what I was thinking!” 🙂 So, that’s exactly what we did!

The only caveat to throwing a Wild Kratts party is that (because it’s a relatively new show) there is almost no merchandise available–no plate, cups, napkins, balloons, invitations, nothing! So, we had to do it all DIY style (you can see all my inspiration on my Wild Kratts pinterest board)! It was perfect for incorporating quite a few just general safari/jungle/animal themed ideas! With so many plush & hard plastic animals in our house, we had some easy decorations already! 🙂 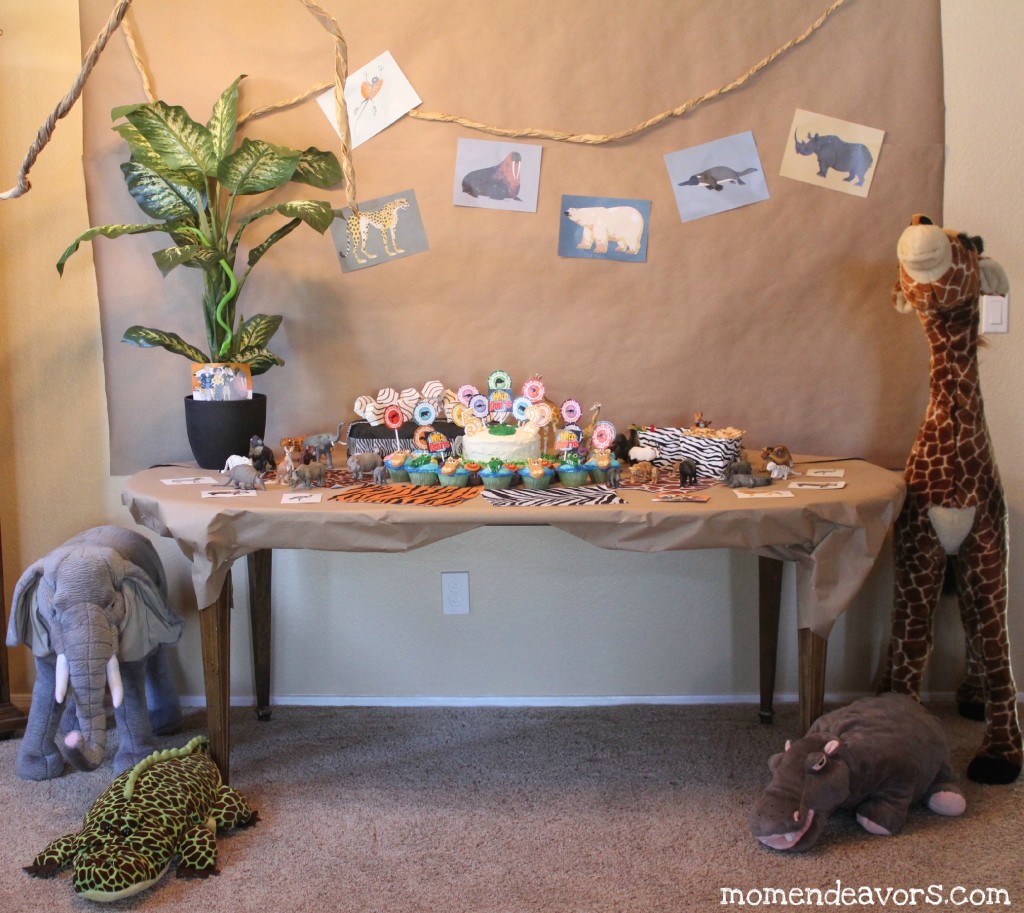 As always, making the cake/desserts was one of my favorite aspects to party planning. Unlike many of my previous cake creations, the cake this year was rather simple and I opted for cute cupcakes & toppers instead. But, I like the way it turned out! We had zebra cake pops, a simple Creature Power Paw cake, animal cupcakes, and zebra bins filled with animals crackers & gummy creatures! 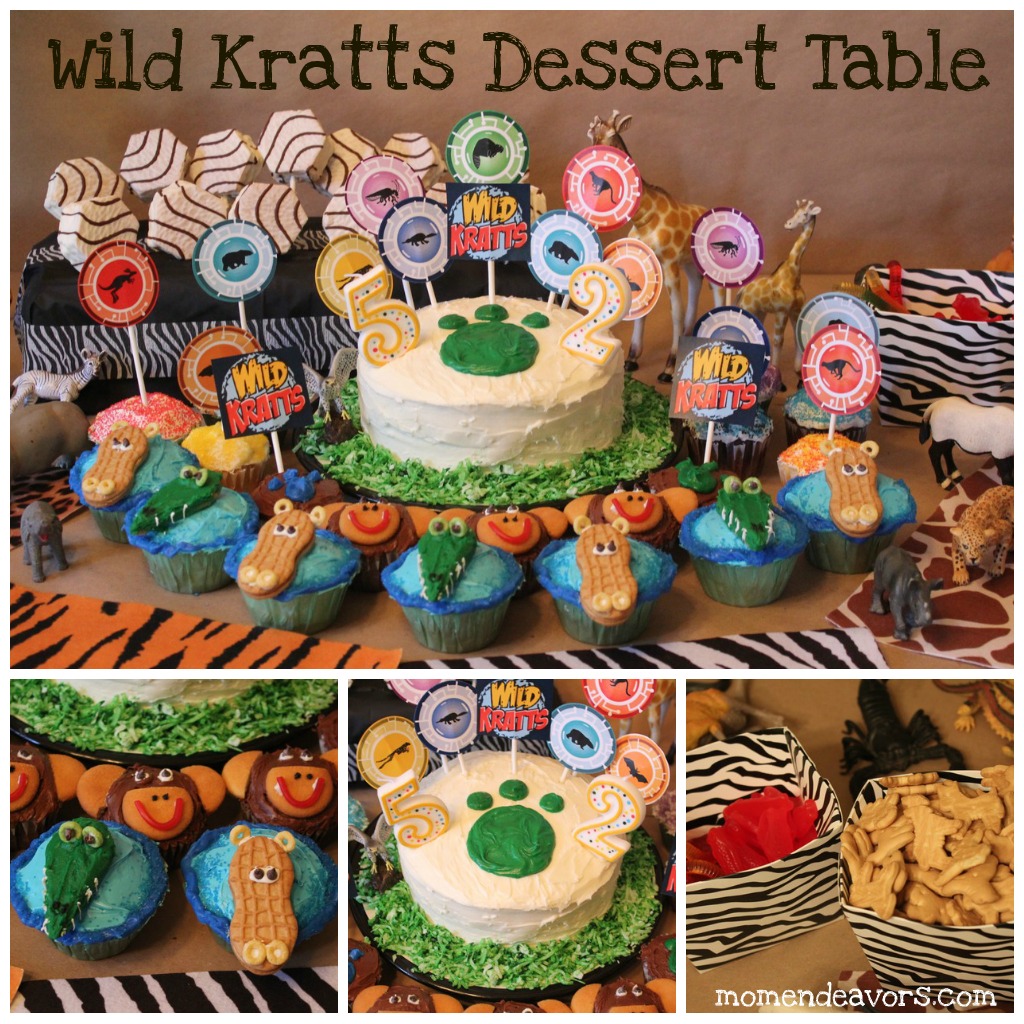 This year, I also had great fun putting out some themed food items! We had lots of adults and kids to plan for, so we needed a diversity of items.  There wasn’t a lot left over by the end of the night, so I think it turned out pretty well!  Here’s the menu: “Safari Sandwiches” (catered), “Green Viper Salsa” (our favorite green salsa from a local Mexican food restaurant) with chips, “Herbivore Corner” (fresh veggies, chips, and dip), “Ants on a Log”, “Gorilla Grub” (a big fruit salad), and “Bug Bites” (mini corn dog nuggets with rice noodles). 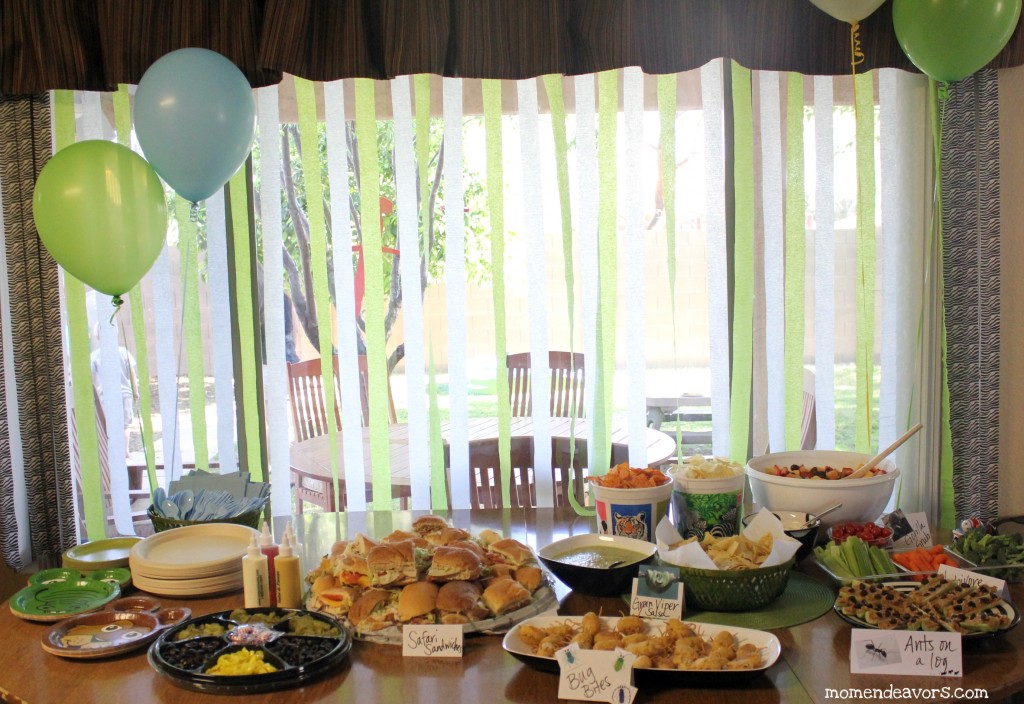 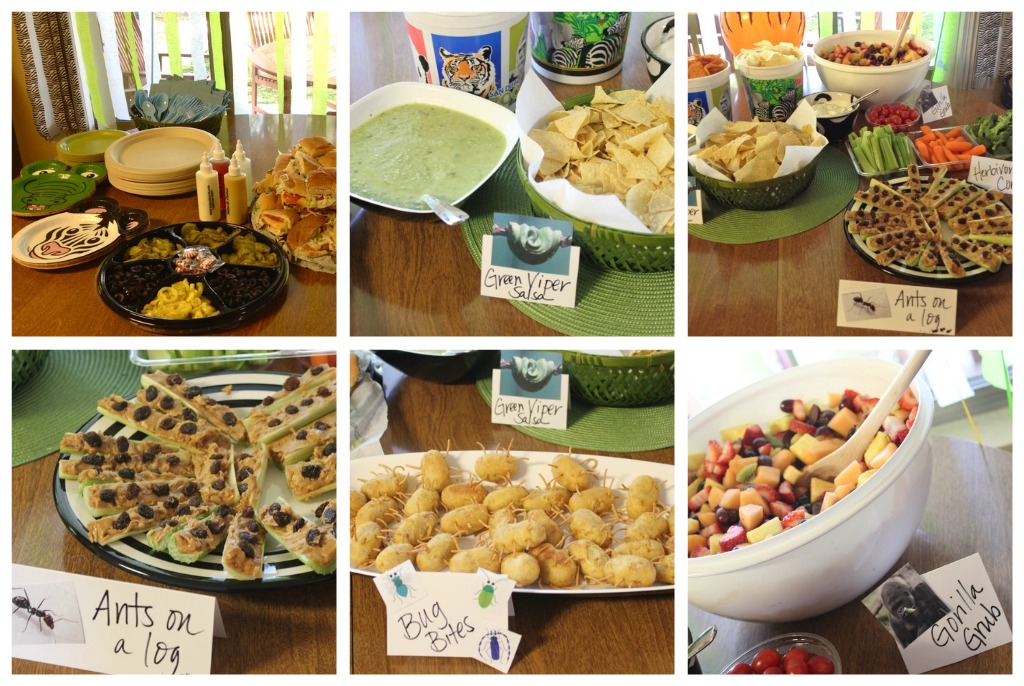 We also had the “watering hole” set up for some drinks (sadly, I forgot to take a picture until the end of the night, so picture it with a few more cups & drink items)–the crowd favorite was the “jungle juice” (which is just our favorite green punch recipe). 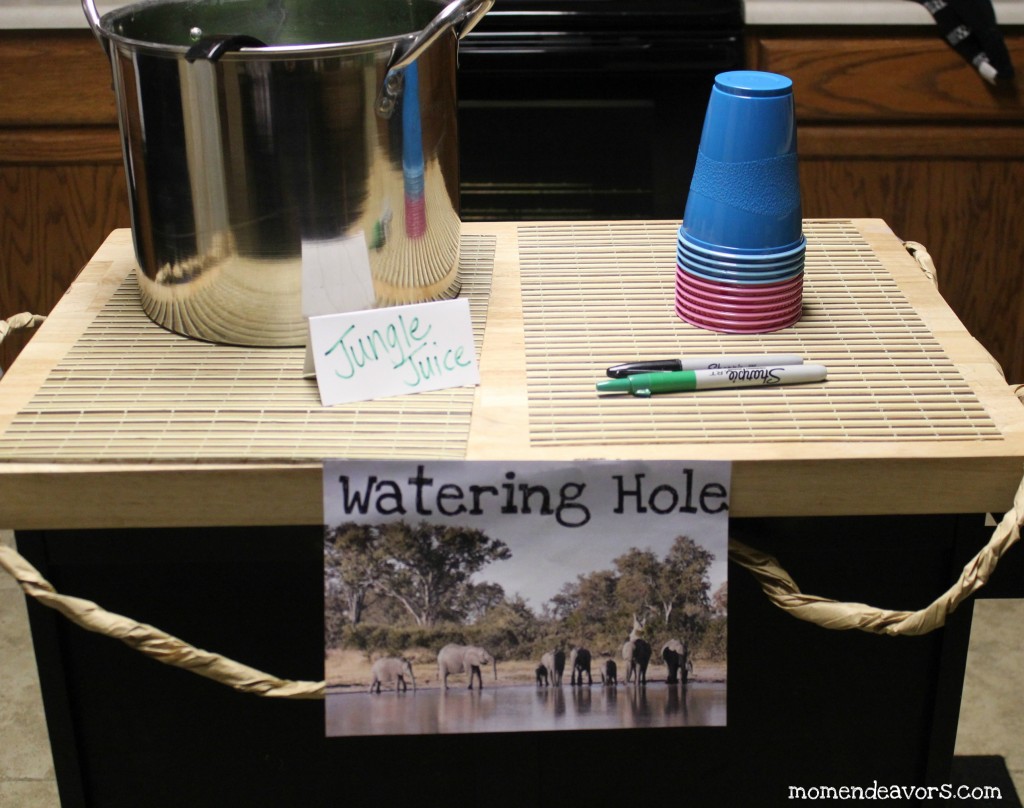 While all the food was a big hit, the favorite things amongst the kids were by far the favors and activities! For favors, each kiddo got their very own Creature Power Suit complete with Creature Power discs (full post on making these coming soon), a couple of things to go along with our activities, and an animal coloring book. I found the Planet Earth coloring books at the dollar store–which was an awesome find!!

We had Wild Kratts on while our little guests arrived. A few of the kiddos had never seen the show, so it was fun for them to all watch a little bit. Then, once everyone had arrived, we headed into the other room to talk about “creature powers” and hand out the Creature Power Suits! They were SO excited!! Here are some of the adorable little guys sporting their new suits (sadly, our littlest birthday boy and a couple of guests are missing from the picture and we didn’t manage another group shot the rest of the night!). 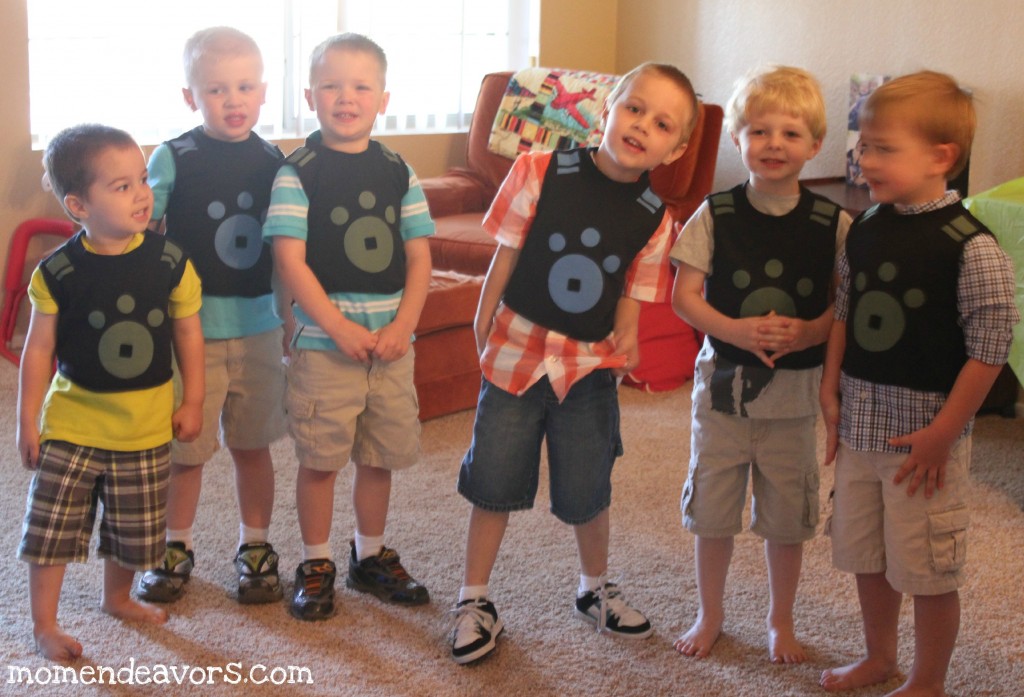 After everyone had their suits on, it was time to get out the creature power discs and start some activities! 🙂 Each one of them got a baggie filled with 8 discs–they loved looking at the different animals! 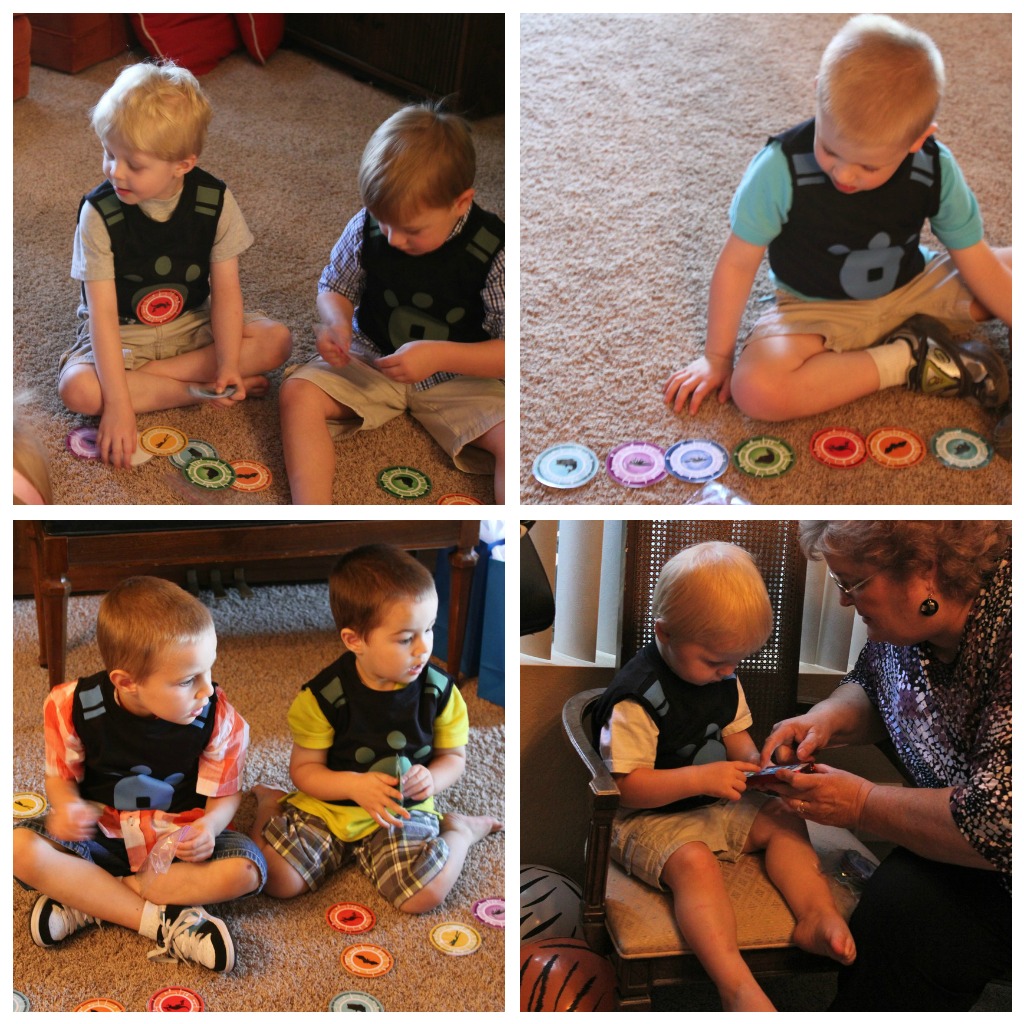 We talked about some of the different animals and then I asked them which one of their animals eats a lot of bugs. A couple of the kids were quick to shout out, “Bats”!! And, they were right! So, we put on our bat creature power discs in order to go outside in “the jungle” and hunt bugs just like bats do! 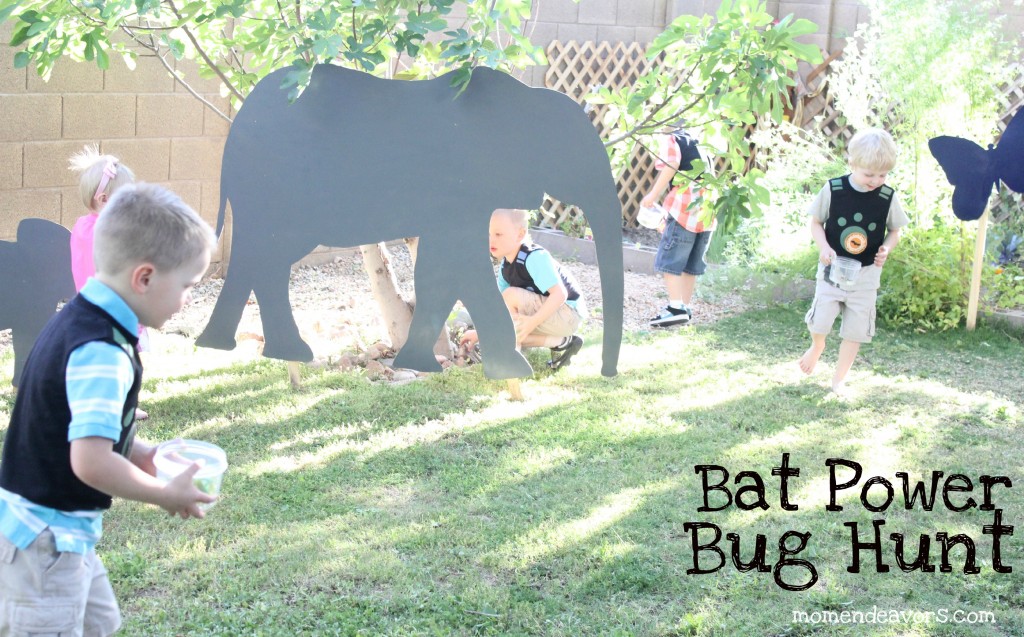 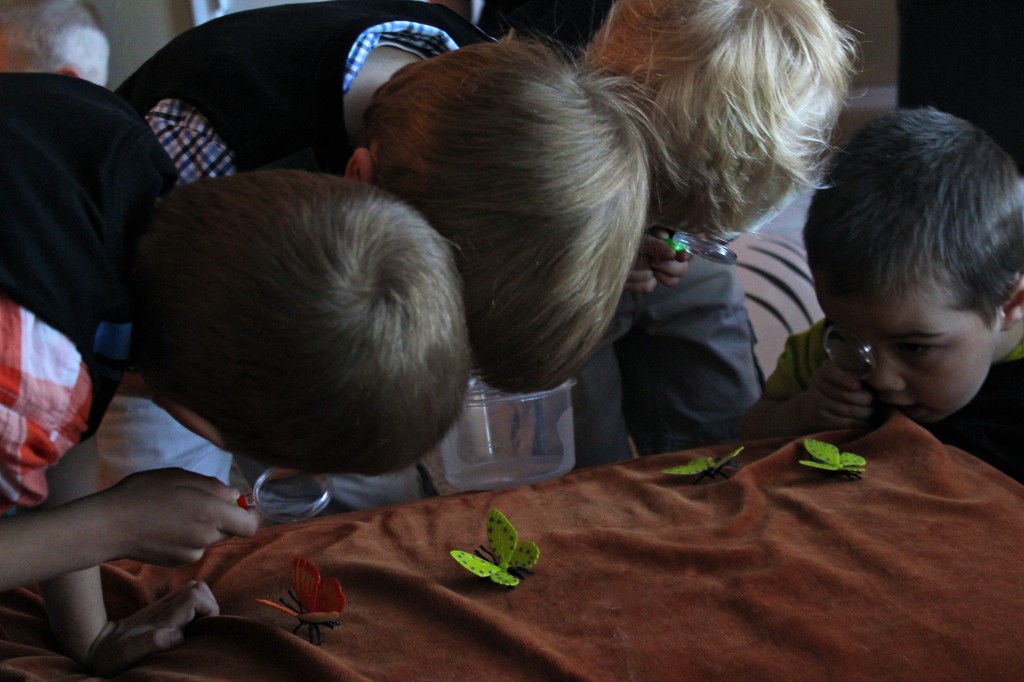 Then, we went back inside to look at all of our bugs & talk about the next creature power! When asked about which animal is the fastest, they almost all yelled, “Cheetah”. So, we activated our cheetah powers & went outside for a game a cheetah tag, complete with tail snatching! I was so worried that the they would get upset about having their tails snatched off, but they all did great & had great fun chasing each other! 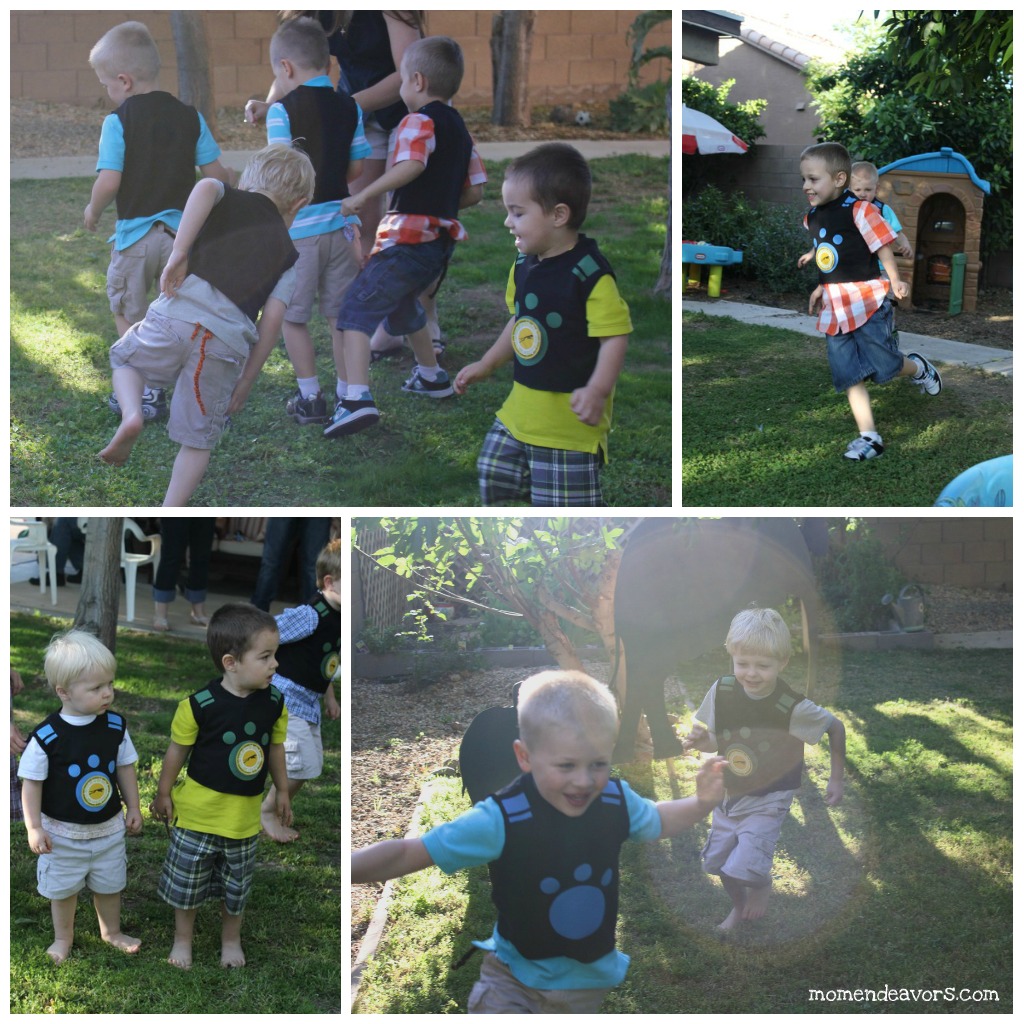 After cheetah tag, we had one last organized activity and it ended up being the crowd favorite, hands down!! For this particular activity we got our bass creature powers on–and went fishing for little fish!! It was a huge hit–so much so that the rest of the night was pretty much just spent eating & fishing! 🙂 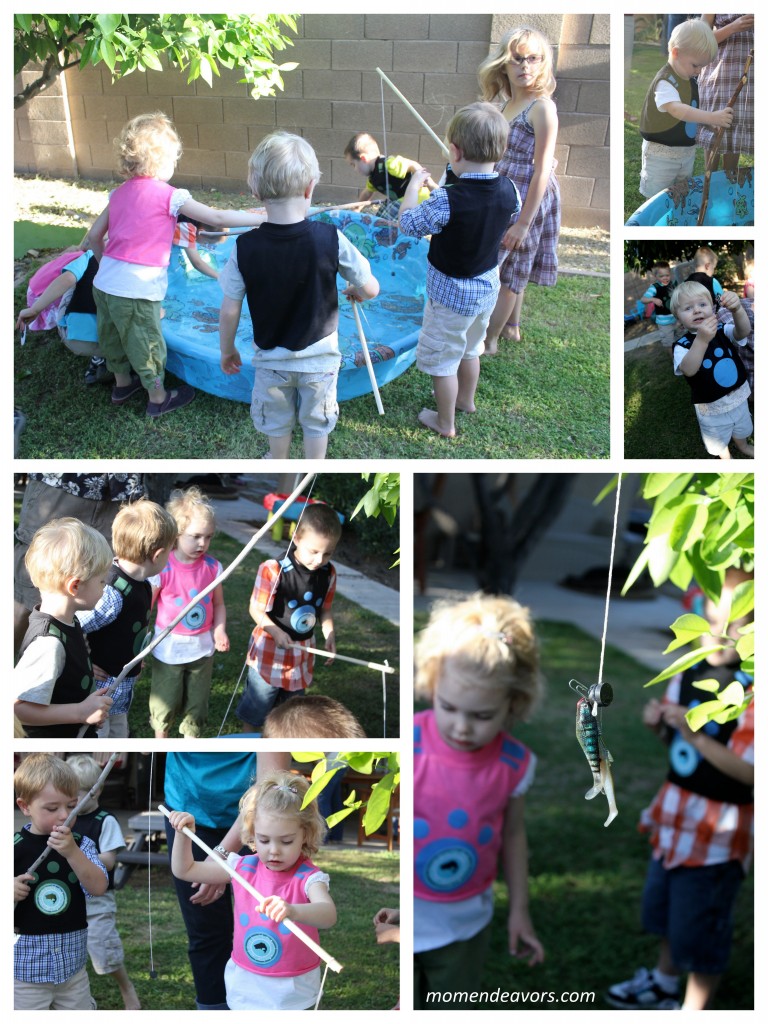 All in all, it turned out to be such a fun time and we’re so thankful to all the friends and family that came over to help celebrate the birthdays of our little guys! A very happy 5th & 2nd birthday for our special brothers, indeed! 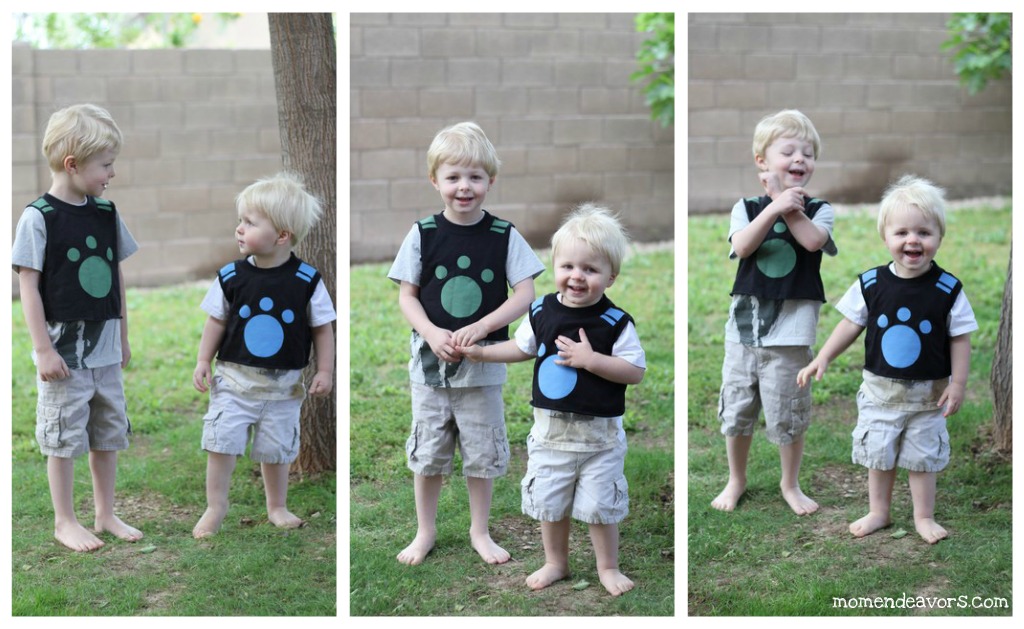 Thanks for sharing in all of our Wild Kratts fun! Separate posts are coming with details on making many of the items for the party, so stay tuned!

Related posts, party details, and inspiration can be found here: