We’re kicking off the interviews from the #ThorRagnarokEvent press trip (invited & hosted by Disney) with the head honcho himself – Marvel President Kevin Feige! 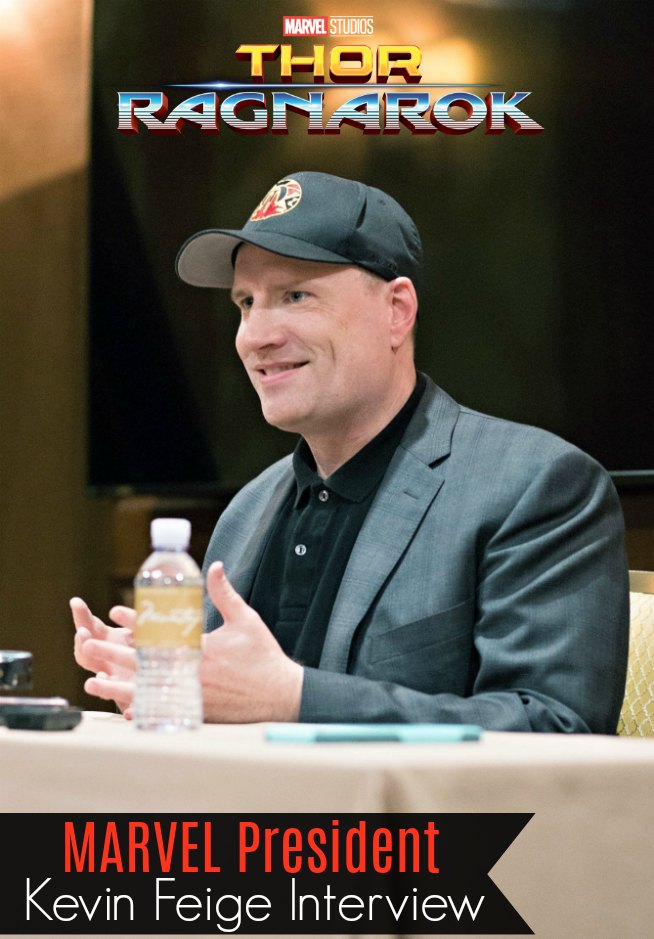 I had the pleasure of interviewing Kevin Feige once previously, for The Avengers: Age of Ultron. So, it was fun to interview him again a few years (and a few movies) later! I can’t even fathom the wealth of MARVEL Universe “secrets” that he knows and how much he has going on. Promoting one movie, filming another movie, post-production on a couple other movies – it’s so crazy! Thor: Ragnarok (read our Thor movie review here) is the latest from the MARVEL Universe (in theater 11/3/17) and it was fun talking about Thor, in addition to some other upcoming movies!!!

Q: Why does this Thor has such a different look and feel?

That was our idea, perfected and improved by Taika. We wanted to, as we always do in our movies, go to a new place. Go to an unexpected place. Look at what we did with Shane Black’s Iron Man 3, the third Captain American film with Civil War and we always look at a third film, Infinity War in the case of Avengers coming up, as an opportunity to take what the fans like and take them to a totally unexpected fun place.

Also, Mr. Hemsworth, he’ll mention this probably, used to say, ‘hey, mate, Captain America has got Iron Man in his movie, has got Black Widow in his movie, who am I getting?’ I’d go, ‘oh, I know, ha’ and I’d go, ‘I think he’s right. I think he’s right’. The fun thing about Thor is he’s got amazing characters in his own comics– Hela and Valkyrie from his books, from the mythology. We knew we wanted to bring in there, but thinking about who else we could bring in the universe and very quickly we realized Hulk would be that guy.  Seeing Thor and Hulk battle it out together is great. Seeing Banner and Thor being fish out of water is even better. You have this great dynamic between them!

You get a little fun feel for that fun dynamic in my favorite teaser trailer here:

Q: What was behind pulling the Planet Hulk storyline into this movie?

Planet Hulk, in which Hulk finds himself forced into these gladiatorial games was always a great comic. That image of Hulk with these big battle weapons and that big helmet, we loved. We never really thought we would be able to do it, in large part because Banner is not a part of those comics. He’s Hulk the whole time and we love Mark Ruffalo. And wouldn’t want to do a movie without Mark Ruffalo in it. So, I always sort of thought there wouldn’t really be that opportunity. As we were putting Thor: Raganrak together, we realized, ‘oh, we could, this is where we could do it. This is how we could do a taste of it’. This is not the Planet Hulk story, but it’s certainly the inspiration of getting to see that and even characters like Korg and Meek who, as performed by Taika, steal the whole movie.

Q: Are there plans for any other stand alone Hulk movies?

We love them all. We think it would be fun to  bring them to the screen and how we do that, I’m not sure. In terms of stand-alone Hulk movies, there are various contracts with studios that have to be worked out. I’m just so happy that we have the ability to include Hulk in these ensembles and what
we already have planned, the arc that we’re started with Raganrak – An enhanced push and pull between Hulk and Bruce Banner sort of for their, for their body continues in the next Avengers film.

Speaking of other movies, we asked about a few things. First up, there was a question about Thor meeting the Guardians of Galaxy! And that will be happening – SOON! 😉

“Infinity War is a pretty major meeting of those minds and we already shot some very fun scenes between them. The cosmic adventurers spend a lot of time together in that movie.”

AHHHhhh! So excited I cannot wait for Avengers: Infinity War (which hits theaters in 2018)! We also asked him about an all female movie!!

Q: Are you looking towards an all female movie?

I think we certainly have enough powerful characters to do that. When and how, I don’t know. But I recently found myself in an undisclosed location. Somebody tapped on my shoulder and I turned around and there was Scarlet Johansson, Brie Larson, Karen Gillan, Tessa Thompson, Pom Klementieff, Zoe Saldana, all saying, ‘hey, when are we going to do a movie’ [LAUGHS]. So that was pretty overwhelming.

With all that talk about not only this movie (Thor), but all these other movies coming out, we wanted to know how he balances it all. Like I said above, it really is CRAZY to think about this one guy being at the helm of such a wealth of creative stuff (in that regard, he’s sort of the “Walt Disney” of the MARVEL Universe)! 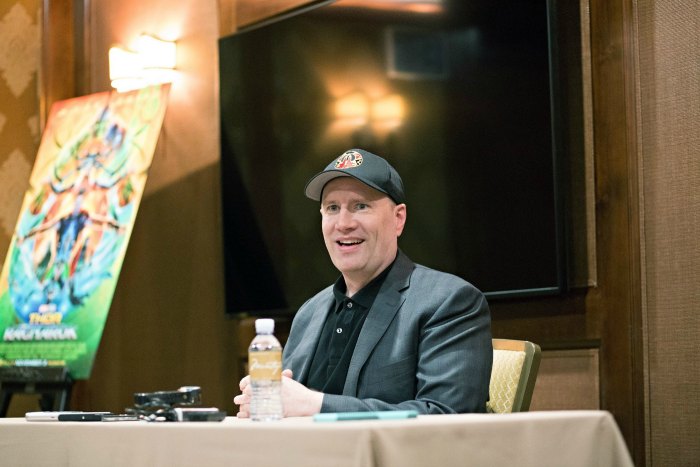 Q: How do you balance all the films you have coming out?

You hire Taika Waititi, you hire James Gunn, you hire John Anthony Russo.  I’ve got a incredible team at Marvel Studios. Each film has a single embedded Executive Producer on it who oversees it. Brad Winterbaum on this movie, executive Producer on that poster over there has lived with Taika for the past two and a half years – moved his family to Australia for months and months. They’re on it the whole time, so I’m always a text
or a phone call away of knowing exactly what’s happening anywhere at any given time. 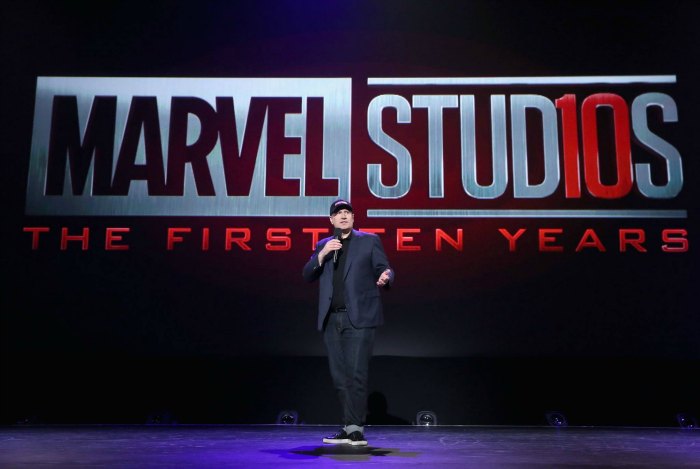 In that regard, I think it’s important to note that MARVEL Studios is approaching their 10 year anniversary! You can tell Kevin is very proud of the work they’ve done and what the future holds for MARVEL.  “It’s a great privilege to have this team in place. Most of us have been together for almost the entire ten years at the studio, which is very unusual in Hollywood. It’s great.”

I’d definitely agree that they have a great time, because they keep putting out some really fun, entertaining films! Stay tuned for more of our Thor: Ragnaork interviews and make plans to go see the film in theaters 11.3.17! 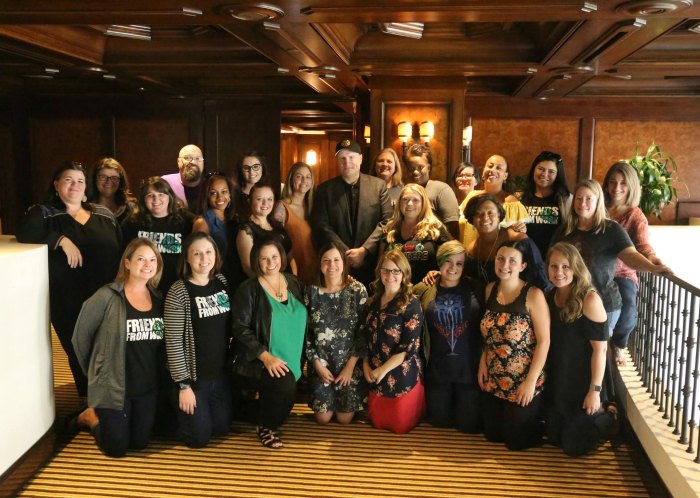 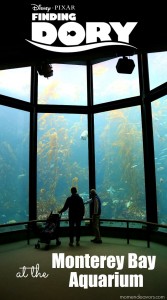 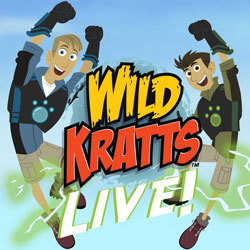 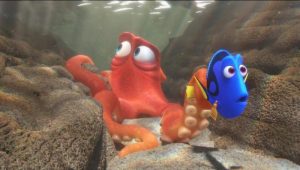 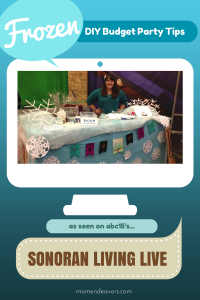