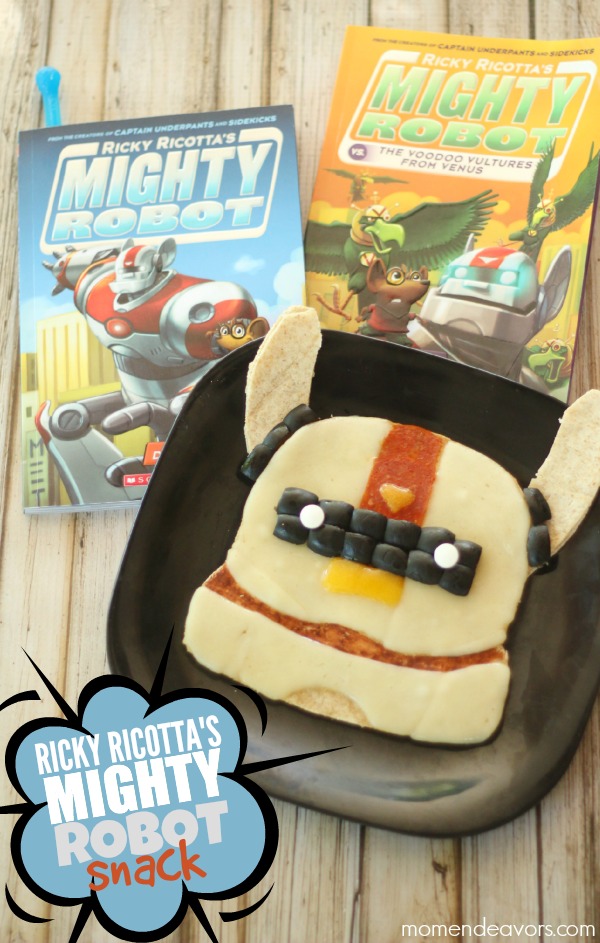 Have you heard of the Ricky Ricotta book series? The series comes from author Dav Pilkey (from the Captain Underpants series fame with over 70 million books in print) and is perfect for my little reluctant 2nd grade reader! Honestly, it’s been tough finding books that really excite Big Brother and as soon as we received the Ricky Ricotta series, I knew we had a winner! He was SO eager to check out the books. In fact, many days I’ve caught him flipping through some of the pages. He especially likes the comic-book style graphics in some areas of the books. 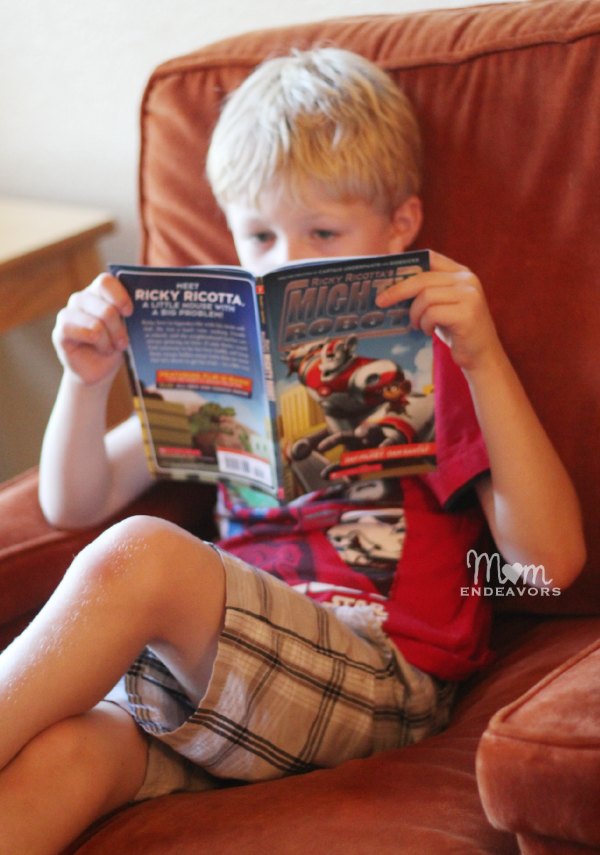 So, since we’ve been having so much fun with Ricky Ricotta and his might robot, I made the boys a mighty robot snack! And, they were mighty excited about it! 😉 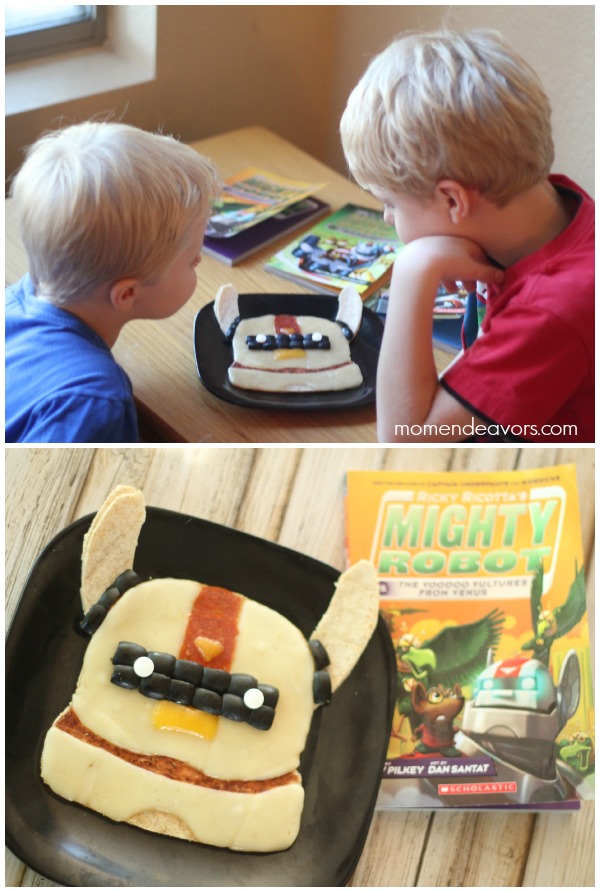 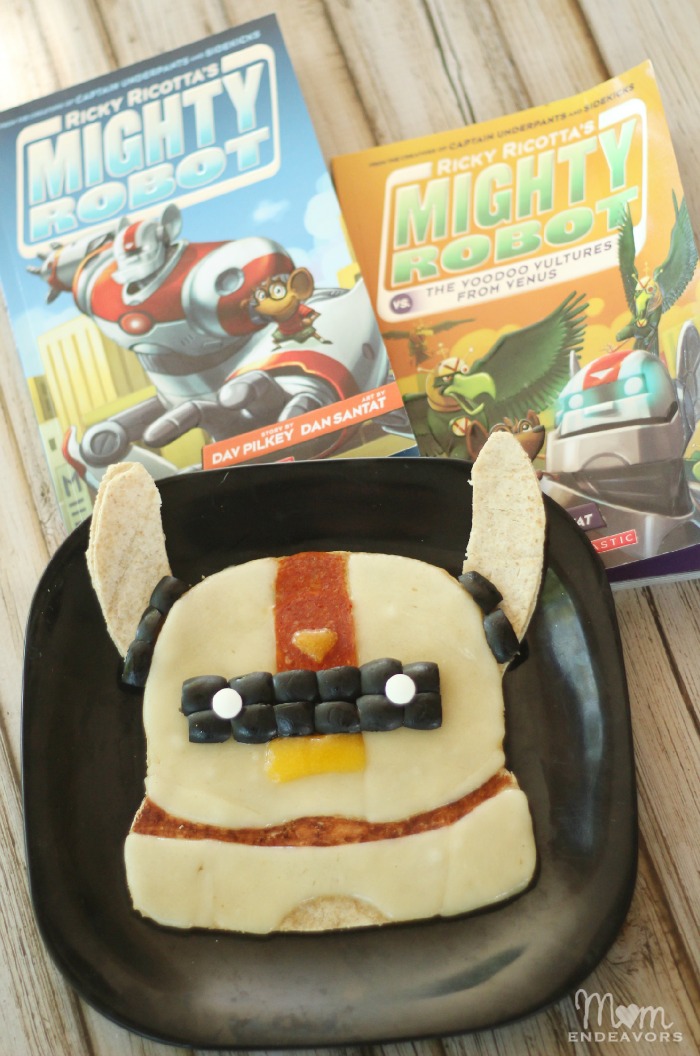 Start by cutting cutting the rough shape of the robot’s head (& ears) out of the tortilla. Use your food safe marker to draw in the rough shape of this mouth. Then, start adding on the food details to make his face. I used provolone cheese slices just to fit the face/helmet. I cut black olive squares for his eye area and the ear attachments. Then add the candy eyes, flipped over so just the white shows. His “nose” is a cut piece of cheddar, as is the triangle on his red stripe. The red helmet stripe is cut pepperoni. Once everything was in place, I put it in our toaster oven just until the cheese barely started to melt & everything was warm. The end result was a super fun, mighty robot cheesy pizza quesadilla snack!

The boys loved it! Such a fun way to help make reading more fun!

If you’re interested in the book series, here’s some additional information:

(From author Dav Pilkey and Illustrator Dan Santat) Ricky Ricotta is a little mouse with BIG problems! Every day he is picked on by the neighborhood bullies. He lives in Squeakyville with his mother and father, and being an only mouse, he is often lonely. That is until SOMETHING BIG HAPPENS! A giant flying robot enters Ricky’s life and an unlikely friendship is born! Together, Ricky and his Robot must save the planet from a galaxy bursting with bad guys!

Little Ricky Ricotta has a problem: the bullies at school pick on him all the time. Until one day, he saves the life of a mighty robot. Together, Ricky and his Robot face the bullies, and save Squeakyville from a giant evil lizard monster. That’s what friends are for!

Mr. Mosquito hates Mercury. The days are so hot, they melt his flip-flops, and the nights are so cold, his toothpaste freezes solid! He’s decided to take over Earth instead. Ricky and his Robot must stop his army of massive Mutant Mosquitoes!

Victor Von Vulture hates Venus. His toasted cheese sandwiches are always way too gooey, and ice cream melts in a second! So he and his army of Voodoo Vultures try to cast a spell on the Earth. It’s up to Ricky and his Robot to stop them!

ABOUT BOOK FOUR: RICKY RICOTTA’S MIGHTY ROBOT VS THE MECHA-MONKEYS FROM MARS

Little Ricky Ricotta has a problem: the bullies at school pick on him all the time. Until one day, he saves the life of a mighty robot. Together, Ricky and his Robot face the bullies, and save Squeakyville from a giant evil lizard monster. That’s what friends are for!

And, for more information about the the Ricky Ricotta series (or Scholastic), be sure to check out the following:

Would YOUR kids enjoy the Ricky Ricotta Series and robot snack?

Disclosure: This post is part of a sponsored campaign with Scholastic. All opinions, experiences, and mighty robot snack ideas are entirely my own! 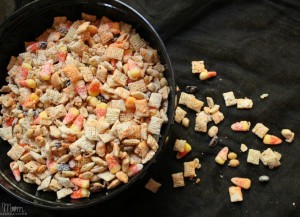 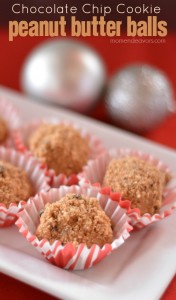 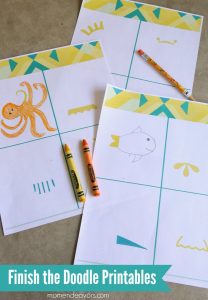 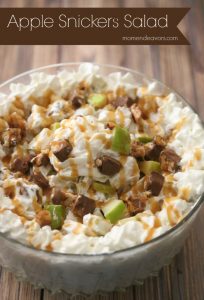