I’m so excited to share all the fun from the World Premiere of Marvel ’s THOR: RAGNAROK  in Hollywood! At the invite of Disney, I had the pleasure of walking the red carpet with all kinds of celebrities and seeing the World Premiere of the movie in the El Capitan theater surrounded by cast, crew, Disney & Marvel execs & employees, their family & friends, and the other 24 awesome bloggers on our #ThorRagnarokEvent Press Trip! It was a completely crazy, unbelievable night!!! 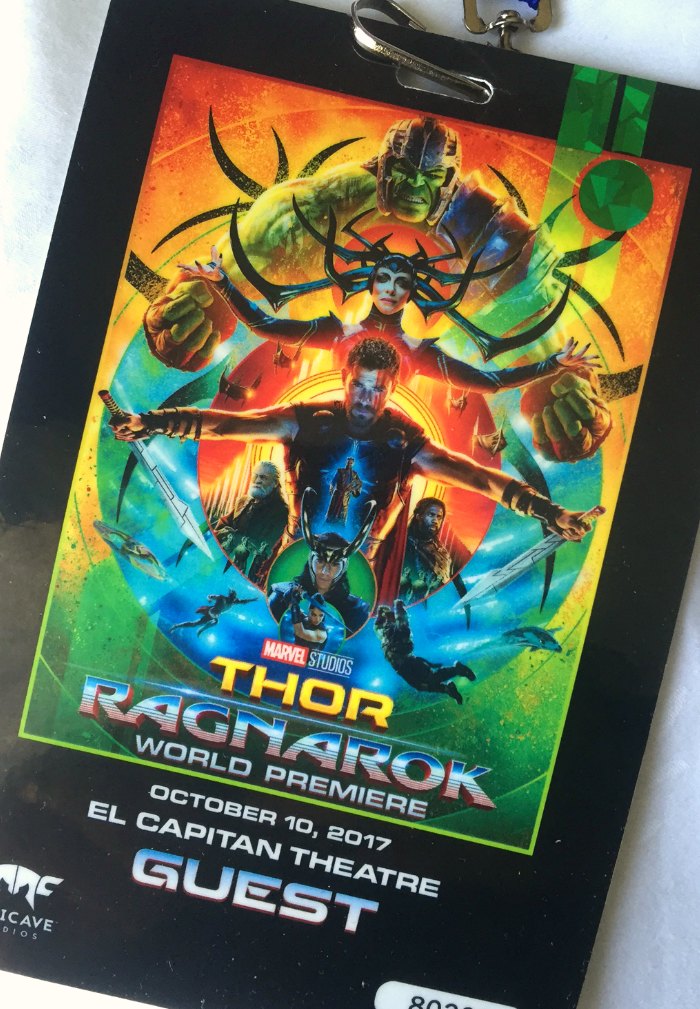 With red carpet premieres, you just never know what to expect. This was my 4th red carpet movie premiere experience (previous premieres include Disney’s Planes, Disney’s Moana, and Disney’s Pirates of the Caribbean: Dead Men Tell No Tales) and each event has been different! This was my first Marvel red carpet though and it was by far the busiest, fastest, and most star-studded! We arrived on Hollywood Boulevard, quickly got our world premiere access lanyards and went through security into the red carpet tent- and it was a wild ride from that point on! 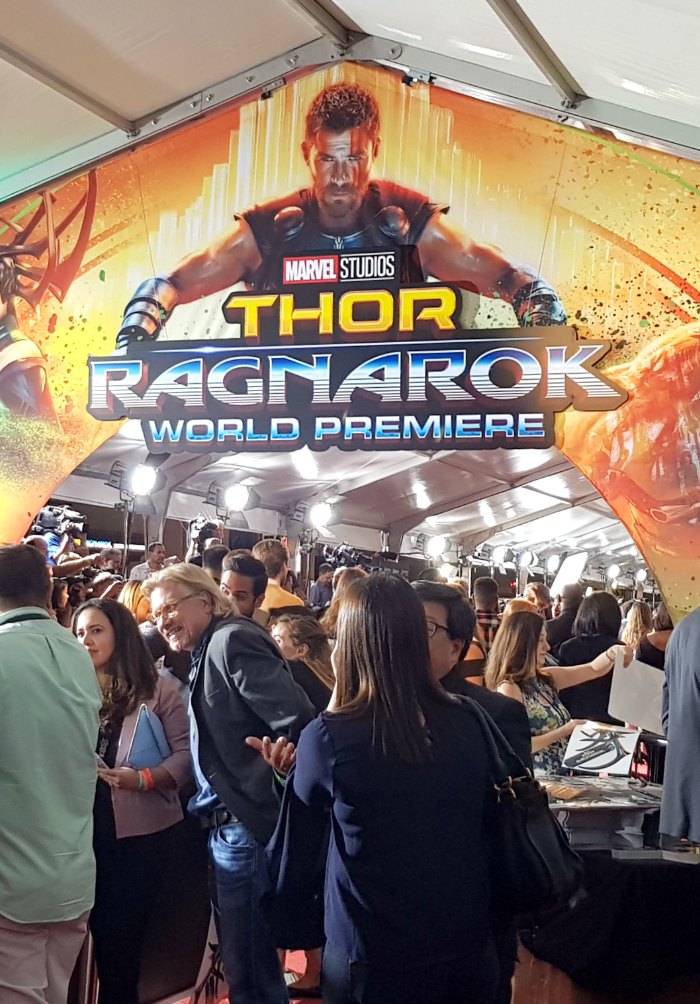 The whole area was abuzz with excitement and energy. People everywhere. Cameras everywhere. Bright lights an colors everywhere. Celebrities everywhere!!! It was so crazy! Given all that, you can imagine that security is tight and they don’t like people to stop as they walk the carpet. So, you’re constantly being ushered along and asked to move/walk/etc. We tried to respect that but linger as much as we could, when we could. After all, you have to get pictures of the experience! With all the people, lights, and tight spaces, we looked for an opportunity to take a decent red carpet photo! 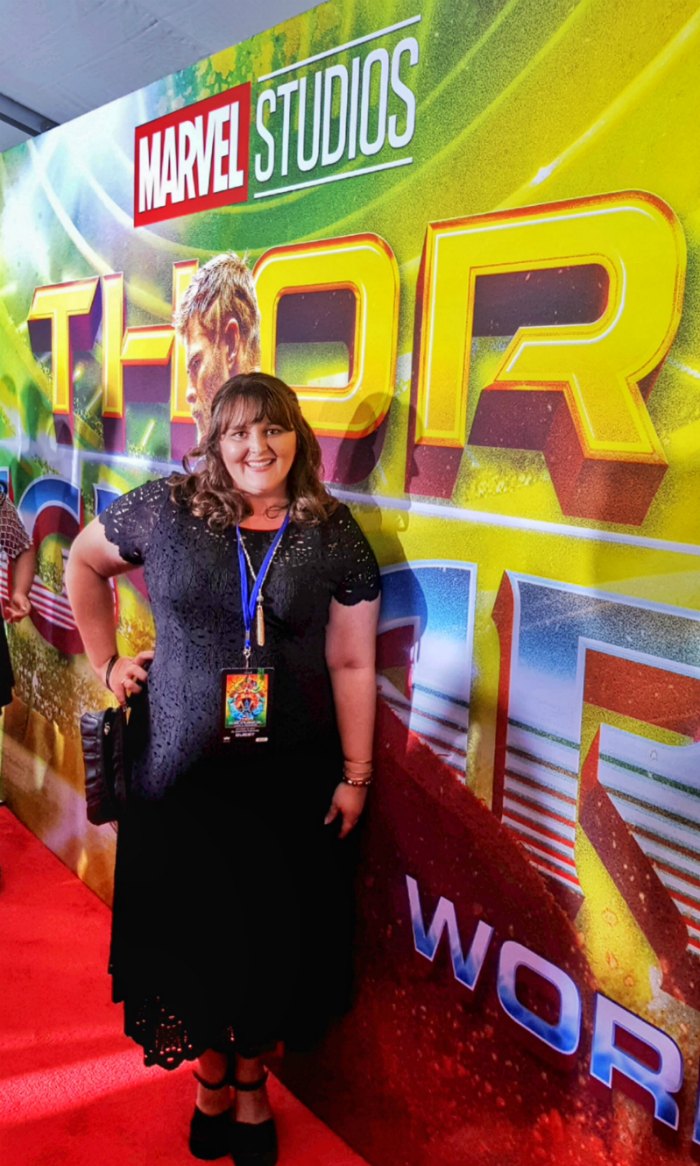 With that out of the way, we could then take in more of the atmosphere and look for celebrities! There were SO MANY! Tom Hiddleston was the first cast member we saw immediately upon entering (and then he got swarmed by people and I couldn’t get a decent photo). We did spot quite a lot of celebrities on the carpet though, including Winston Duke (from Marvel’s upcoming Black Panther movie), Thor Director Taika Waititi, Marvel President Kevin Feige, Guardians of the Galaxy Director James Gunn, Chris Hemsworth, Cate Blanchett, Tessa Thompson, and Karl Urban. Tessa actually had friends/family walking in right ahead of us and spotted them – so she was standing right in front of me! Then, Karl Urban actually crossed the rope line RIGHT in front of me (I actually needed to move back slightly), so he could great some friends/family on our side of the line! So wild! 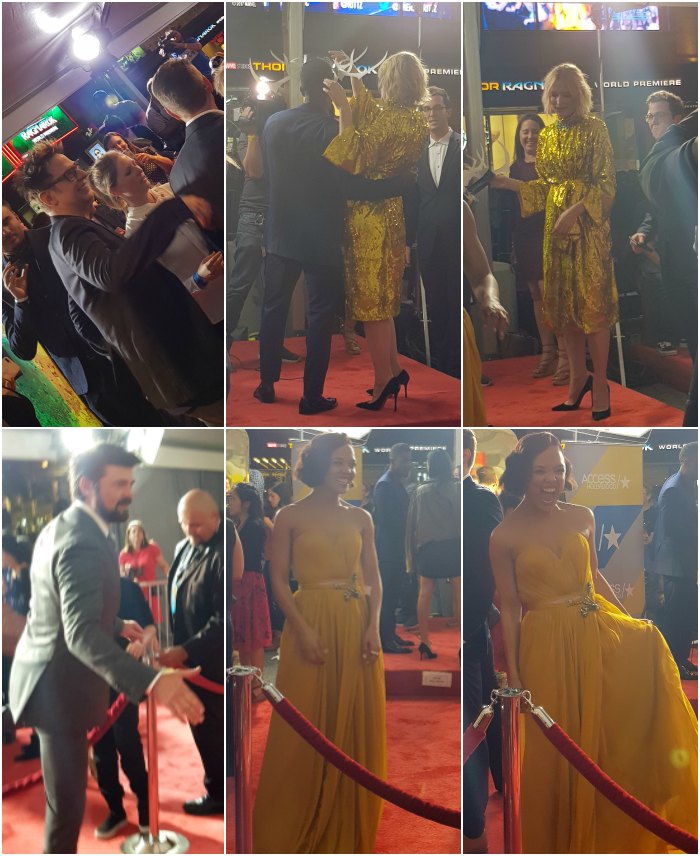 And of course, everyone in our group was hoping to catch a glimpse of Thor (Chris Hemsworth) himself! And we did!!!! He was doing interviews, so no chance for better photos. But it was still not a bad sight…at all! 😉 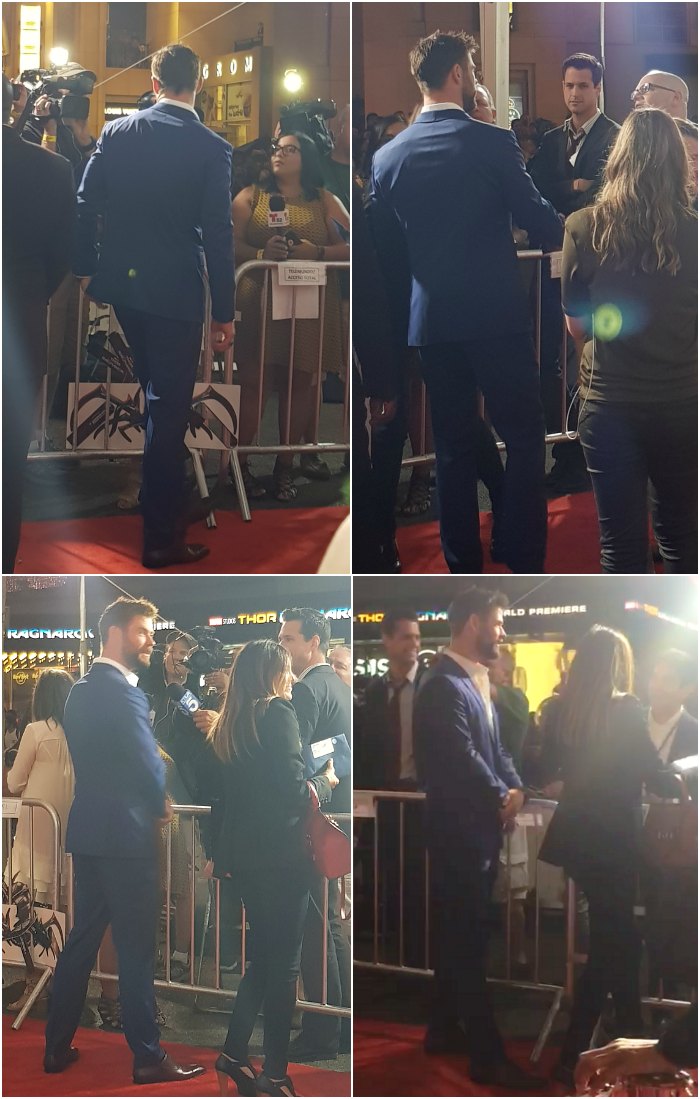 Here’s an actual press photo so you can really get the full picture. You’re welcome! 😉 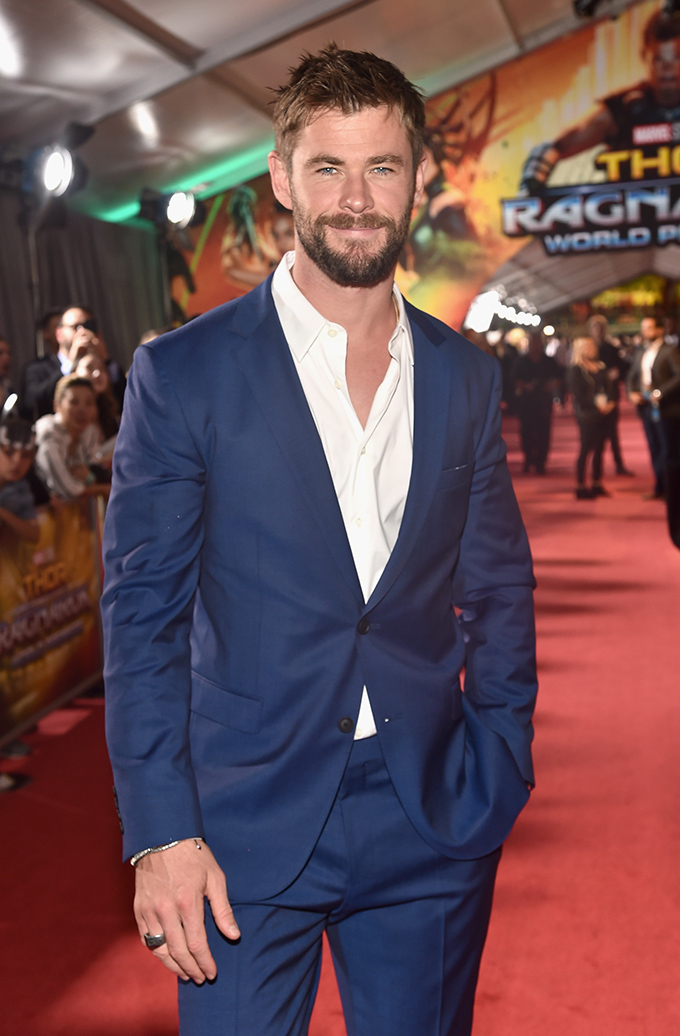 Hello! So crazy to be at such a special, high energy, star-studded event!! I love that we got a glimpse of so many cast members before we had to get inside the theater! They all seem like they genuinely enjoy each other and had a great time making this movie! 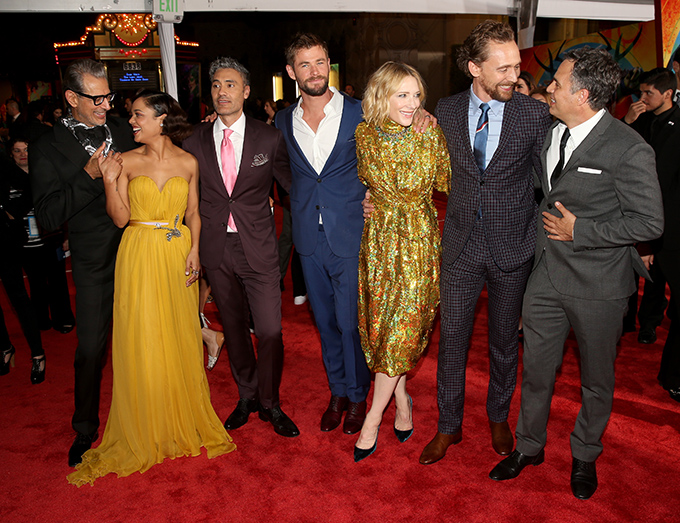 While the stars were taking a bajillion photos and doing interviews, we finished making our way down the carpet snapping photos along the way and taking in everything we could. We ran out of time for any other fun photo opps. But that didn’t stop us from taking some selfies! 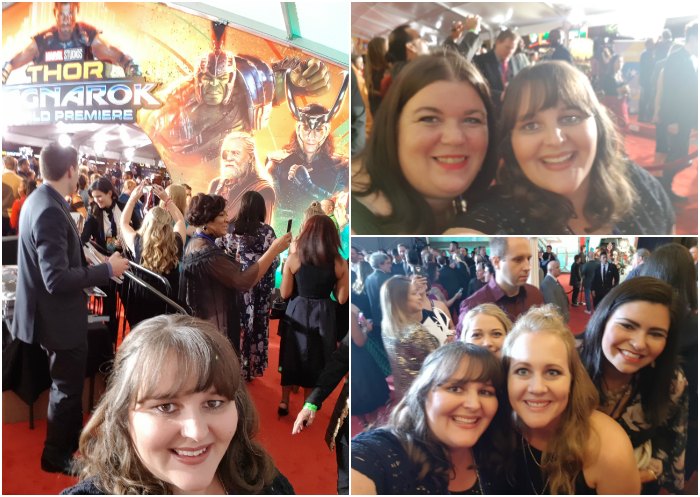 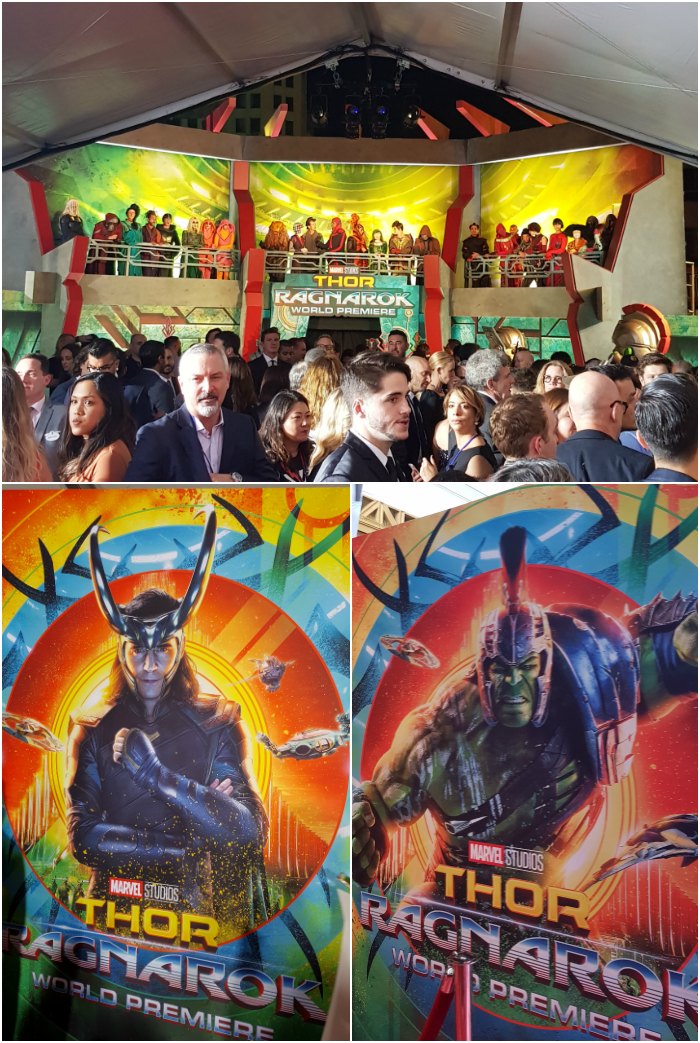 And with that, we (very sadly) had to put our phones away in special security bags as one last security checkpoint on our way into the theater! Once inside, we got free drinks and popcorn en route to our seats in the very first row. Now, first row seats are normally not very fun! But these events are special and it gives us a great view of the cast on the stage! This fun photo shows a GREAT view! 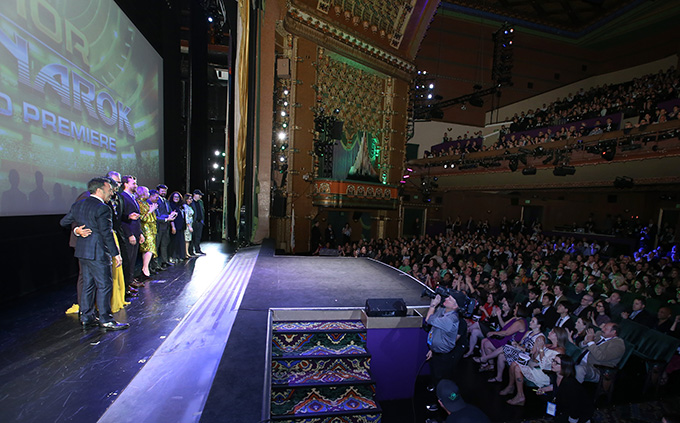 So many “friends from work” in the front row there! Since were seated in alphabetical order, I’m just a few seats down from the stairs (and out of the picture view). BUT, the cast came down those stairs as they were ushered to their seats. Jeff Goldblum walked RIGHT in front of us and everyone else was very close! Then, the movie started and two hours disappeared in a blink! The movie is SOOOOO good (full review on the blog soon). It’s always SO special seeing the film for the first time WITH the stars of the movie. It’s the first time for most of them too! SO surreal! The energy is SO fun – everyone claps & hollers the first time a new main cast member enters the movie. People cheer during the credits. Laughter seems heartier than at a normal, everyday showing. And what was really REALLY fun this time, is that if I turned around (and I did quite a few times), I had a direct eye-line to Chris Hemsworth for the WHOLE movie! He was laughing and seemed to quite enjoy himself while watching the film!

Then, the movie was over and I was SO sad to not have my phone! We saw Tom Hiddleston exit the theater right near us. Then, Jon Favreau walked RIGHT in front of me. Kevin Feige was there too. And then I looked straight ahead to discover we were talking out of the theater right behind Liam Hemsworth and Miley Cyrus. CRAZY! There were people EVERYWHERE. I stepped to my right just as a gentlemen stepped to his left and we bumped in to each other. He was nice, had a little accent, and we had a little exchange…it was Mr. Hemsworth (Chris, Liam, and Luke’ dad – side note, Luke Hemsworth has a HILARIOUS cameo in this movie)!!!! SO crazy! As soon as we all had our cameras removed from the security bags, my friend Britni from PlayPartyPlan was able to snap a quick pic as proof! 😉 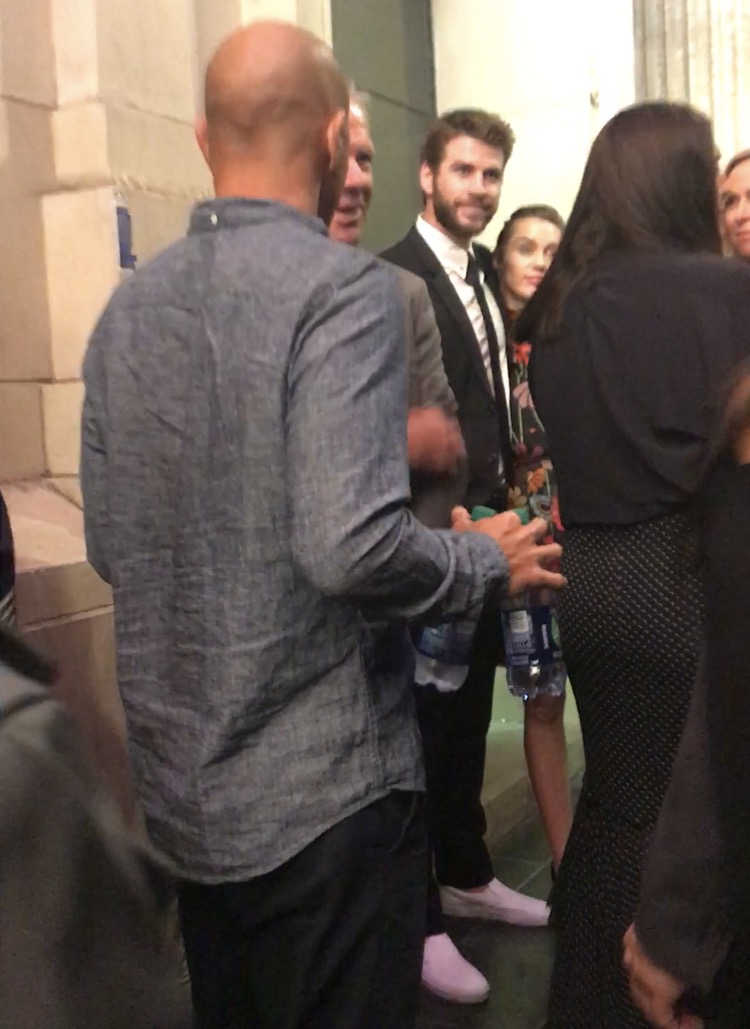 Too bad we weren’t invited to the exclusive party that all the A-listers were headed to! 😉 We would have been happy to follow Liam & Miley there (it was just down the street). Instead, we walked across the street (where the Oscars take place) and took a quick photo to end the night! What a crazy night! 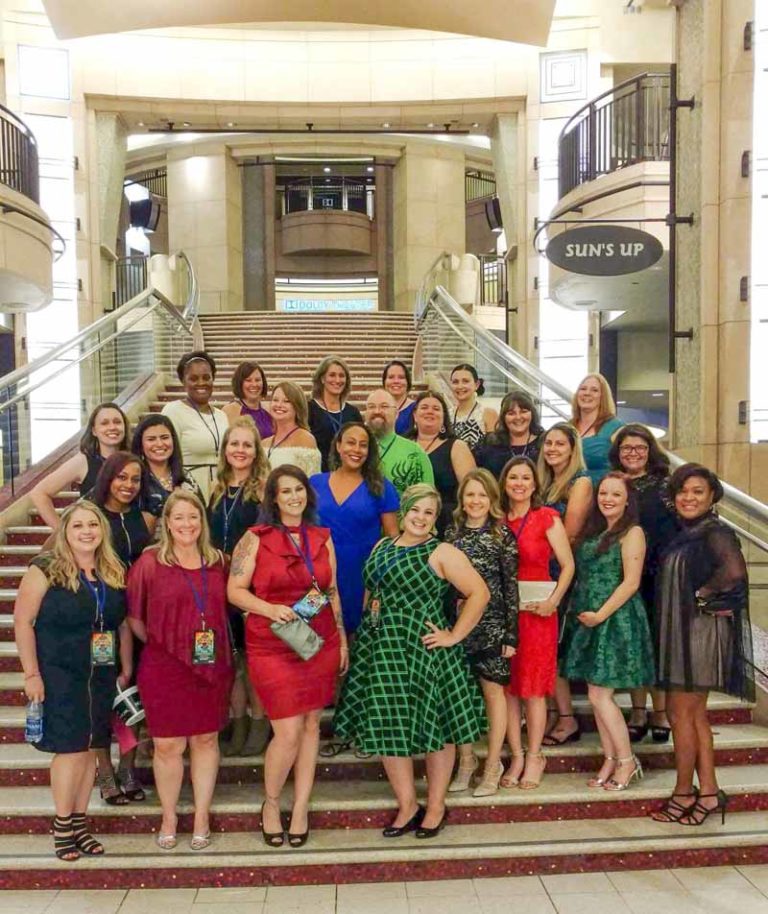 Be sure to stay tuned for our Thor: Ragnarok movie review and make plans to go see the film in theaters on 11/3!! It will not disappoint!