I’m back with another fun MOANA interview. Have you seen it yet? I hope so! It’s SO good (you can read our MOANA review here). As part of the #MoanaEvent Disney press trip, we had the immense pleasure of interviewing the main talent and filmmakersm including Nicole Scherzinger (of Pussycat Dolls fame). Nicole is the voice of Sina, Moana’s mom, and it’s a role that she was proud to take. 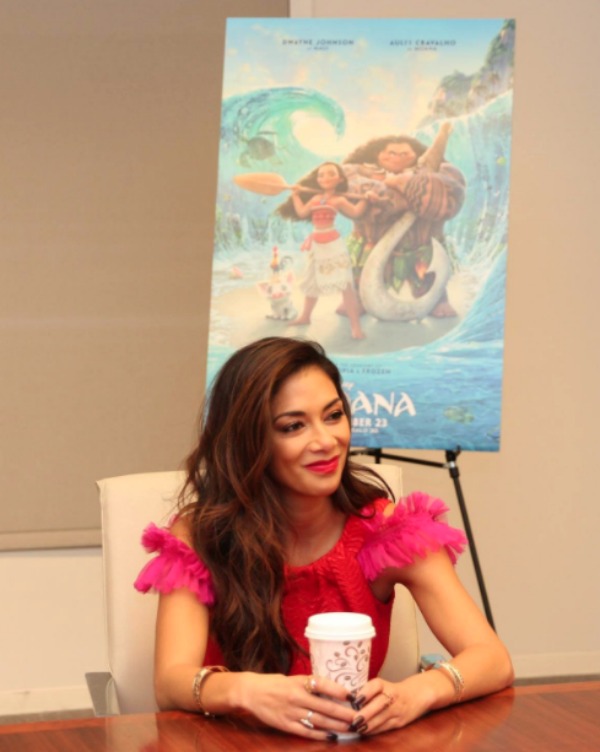 Q: Tell us why you wanted to be a part of this project and how it came to be…

Well I didn’t want to be a part of the project. I felt I had to be a part of the project, and that’s because I’m from Hawaiian descent.  I knew that the movie was going to be about the Polynesian people. So it’s the story of our people. Where we come from. And I’m just so proud that Disney did right by us. And stayed true to our culture, where we come from, our power, our people, our lifeline and just told a beautiful story about a young girl.

It wasn’t a love story, it was a heroine story about a young girl’s journey, which we can all relate to, about discovering who we really are and what we’re meant for. What our purpose and our destiny is. And that’s a beautiful story.  I have the honor of playing Moana’s mother, Sina.

Although Nicole’s part in the movie really isn’t huge in that she isn’t on screen very much at all, her character does play a key role with some very important lines!

Some of her lines, they’re very simple, but it’s very telling. And they’re trying to give me the back story. And I was like, please, I lived this, I lived with my mother and my tutu, which means grandmother in Hawaiian. In our culture, the men are the head of the household, but the women are the backbone. They are everything. They are the strength. They keep it together. And in my family, my tutu had twenty-one births, and then eighteen children that survived.

In our culture, the men are the head of the household, but the women are the backbone. They are everything. They are the strength. They keep it together. And in my family, my tutu had twenty-one births, and then eighteen children that survived. And so that’s just from my tutu. And then my mother, she had ten kids and so on and so on. So my tutu already has like seventy-five grandchildren and great-grandchildren combined. We have a really, really big family at home. So I just felt like had to be a part of this.

In terms of your character, Sina, was there a certain thing that you brought more into the character from your person self?

It was interesting because in the script they had a couple different readings, like different ways they wanted to get the story across. Especially the part where she’s trying to explain to her daughter that you can’t go be on the reef. Trying to explain because, uh, you know, your father’s been there and he’s had a great loss and he’s just trying to protect you. And I you have to draw from a personal connection.

And I think she says a line— She says, ‘Moana, sometimes who you want to be – it’s not meant to be.’ When I thought of that line I really thought of my mother and my tutu and how, I’m sure they had their own dreams. I know we have made sacrifices for the better. Or what we think is for the better. Right? In the end she does know that she trusts Moana and allows her to go and find her destiny. 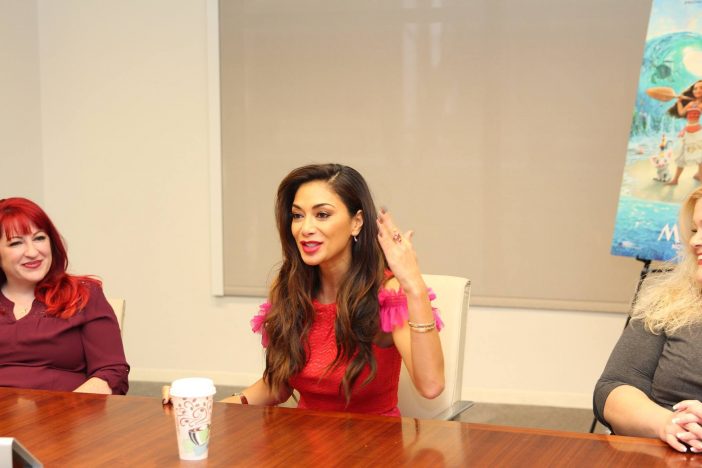 I LOVED hearing her passion for MOANA and just talking to her in gerneral. She loves her family, her culture, and tries to not take any of these amazing experiences she has had for granted. And she’s great in MOANA, so definitely make plans to go see it if you haven’t already! We even all made a little message for everyone! 😉

Blogger roundtable… the verdict is in, they loved #Moana! Mark your calendars for its premiere in theaters on November 23rd so you can fall in ❤️ with it too!