Disney’s 101 Dalmatians hits stores this week (starting on February 10, 2015), as the Diamond Edition Blu-Ray/DVD is released! You can watch Pongo, Perdita, all those adorable puppies, and the epic Disney villain Cruella De Vil in fantastic quality right at home! This one makes for a great family movie night! 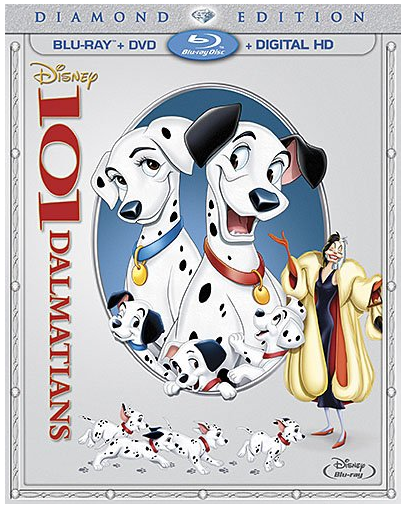 In addition to the classic movie, there are some really fun bonus features included like:

The boys watched the whole “The Best Doggoned Dog in the World” show. It’s almost an hour long and in all black and white, and they LOVED it!!! In fact, they asked if they could watch the next episode! 😉 So, 1961 Disneyland Television is a hit in this house! I would love to find more of the shows and hope that Disney includes more of these as DVD bonus features!

And, stay tuned later this week when we’ll have an interview with one of the “lucky dogs”, Floyd Norman! He’s a living Disney legend and had such great stories to share about working on Disney animation! I felt like one lucky dog just being in the room with him and getting to hear his stories!

For more 101 Dalmations facts & “making of” fun, be sure to click below!

So, be sure to head out this week to pick up your copy! You can buy the 101 Dalmatians: Diamond Edition

on Amazon or at your local stores starting Feb. 10th! It would make a great Valentine’s Day gift for the kids! 😉

For more info about 101 Dalmatians, you can follow along on the Facebook page or visit movies.Disney.com where they have some fun games & activities!

Do you love 101 Dalmatians?

Disclosure: I received a copy of the DVD for the purposes of this coverage. All opinions are entirely my own. My love of Disney & 101 Dalmatians existed long before blogging! 😉