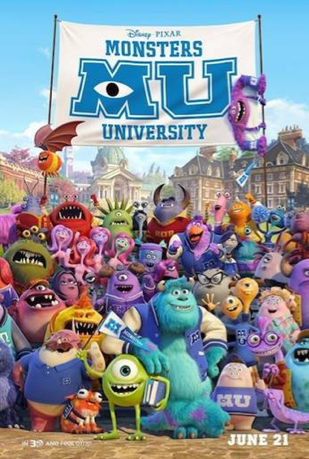 The latest from Disney•Pixar, Monsters University, opens in theaters nationwide today, June 21st! It’s actually a prequel to the critically acclaimed 2001 Monsters, Inc. movie (which was nominated for four Oscars®)! Big Brother and I had the oppor­tu­nity to check­ it out last week in 3D at an advanced press screen­ing! And, we had a monstrous good time!! 😉 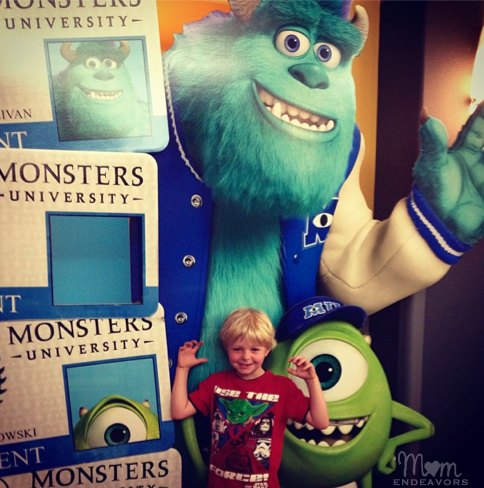 Ever since college-bound Mike Wazowski (voice of Billy Crystal) was a little monster, he has dreamed of becoming a Scarer– and he knows better than anyone that the best Scarers come from Monsters University (MU). But during his first semester at MU, Mike’s plans are derailed when he crosses paths with hotshot James P. Sullivan, “Sulley” (voice of John Goodman), a natural-born Scarer. The pair’s out-of-control competitive spirit gets them both kicked out of the University’s elite Scare Program. To make matters worse, they realize they will have to work together, along with an odd bunch of misfit monsters, if they ever hope to make things right.

First off, before we delve in, I feel the need to share that I actually was not overjoyed with the whole “college theme” when I heard the first details about the movie. I was rather “meh” about the whole thing. From a mom perspective, I just thought it was going to be “too adult” for my little guys–too “Animal House” meets animation. Honestly, we were really unsure about even taking Big Brother to the screening with me. So, needless to say, I did NOT go into the movie with high expectations. However, I was beyond pleasantly surprised! In fact, I LOVED this movie! L.O.V.E-loved! I canNOT wait to be able to take Mr. Mom Endeavors & Little Brother!

As shown in the trailer above, the movie opens with a little elementary school-aged Mike Wazoski and he immediately won me over. I loved him! And, then, he steps foot onto the campus of MU and I was blown away. It is visually stunning! Seriously, the detail in this movie is absolutely fantastic!! There are SO many more monsters on the campus of MU compared to what we saw in Monsters, Inc– and they are all so distinctive and detailed! From a creative standpoint, I can only imagine how much fun the animators had in creating so many different, fun monster characters! 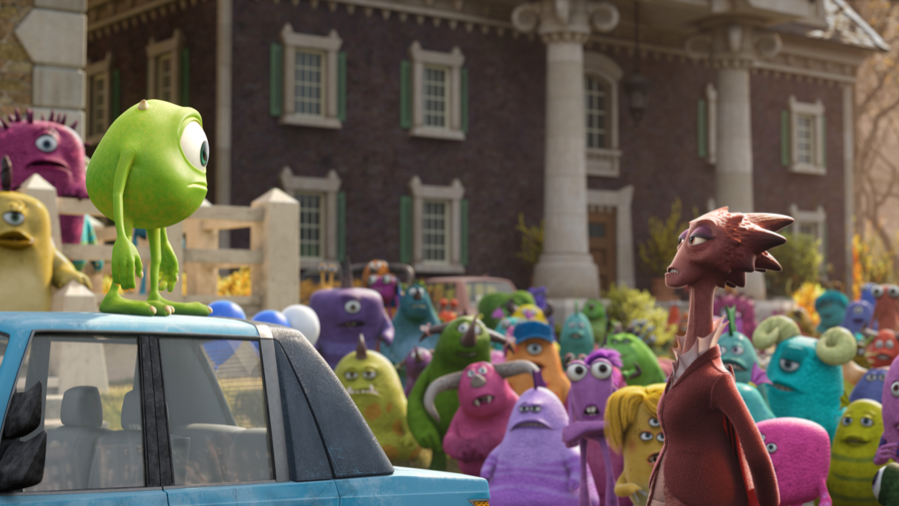 The whole campus feel was really well-done too. Whether they were trying for it or not, Dean Hardscrabble and some of the campus scenes almost seemed to almost parody Hogwarts a bit (which this Harry Potter fan loved). It also definitely has a “Revenge of the Nerds” vibe in there as well. However, all my fears about the whole college concept were not warranted. While there certainly was some raucous fun, there wasn’t any of the “college movie stuff” that you wouldn’t want your kids seeing. In fact, it’s really not even alluded to. But, the movie does have a great “quintessential” large college campus feel. Even the music has a great college vibe–this former marching band member loved all the band sounds, complete with some really great drumline stuff going on! And, speaking of music, thankfully, the fabulous Randy Newman was in charge of the music again. Some familiar sounds and music segments from Monsters, Inc. are used in Monsters University, which just further helps tie the two films together. 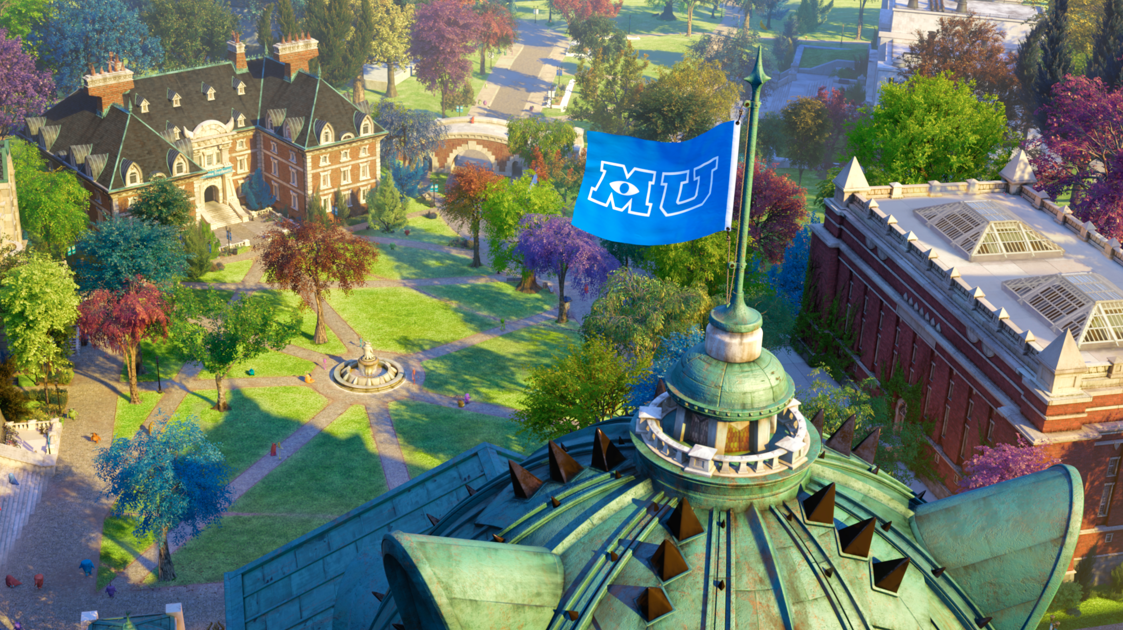 While this prequel is definitely missing the heartwarming, emotional tug that Monsters, Inc. has with Boo, it does still have a lot of heart. And, it has some great messages for kids (and really, people of all ages). Even though the may be cliche’, there are some great “life” reminders in the film like:

While it might not be as emotional as the first film and is much more predictable, Monsters University is still loads of fun and I think completely appropriate for people of all ages–even rather young kiddos! Big Brother (age 6) loved it and we’re planning on taking Little Brother (3) to the theater to see it!  I would suggest though that anyone going to the film have seen Monsters, Inc. first. And, I would especially recommend that if you’re taking young kids so they are more familiar with the monsters.

Also worth noting… The animated short before the movie is “The Blue Umbrella” and it was great! Truly the animation is amazing! It looks like a series of live-action shots, but is entirely animated. Wow! Truly stunning (and a great story)! And, be sure to stay ALL THE WAY through the credits for a fun surprise at the end of the movie!!!

So, from beginning to end, Big Brother and I give Monsters University two thumbs up! 😉 And, for some extra fun for the kids, be sure to print off these free #MonstersU activity sheets! 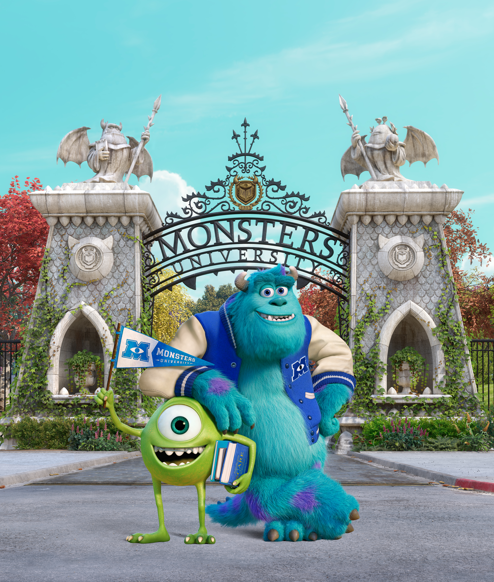 Are YOU plan­ning on see­ing Monsters University? Have you seen it already? What did you think?!

Dis­clo­sure: We saw this movie at a free press screen­ing at the invi­ta­tion of Dis­ney (thank you, Disney!).  As always, all opin­ions and expe­ri­ences are my own and your opin­ion of the movie may dif­fer from mine. 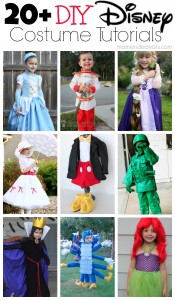 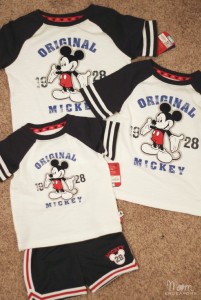 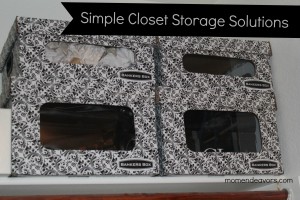