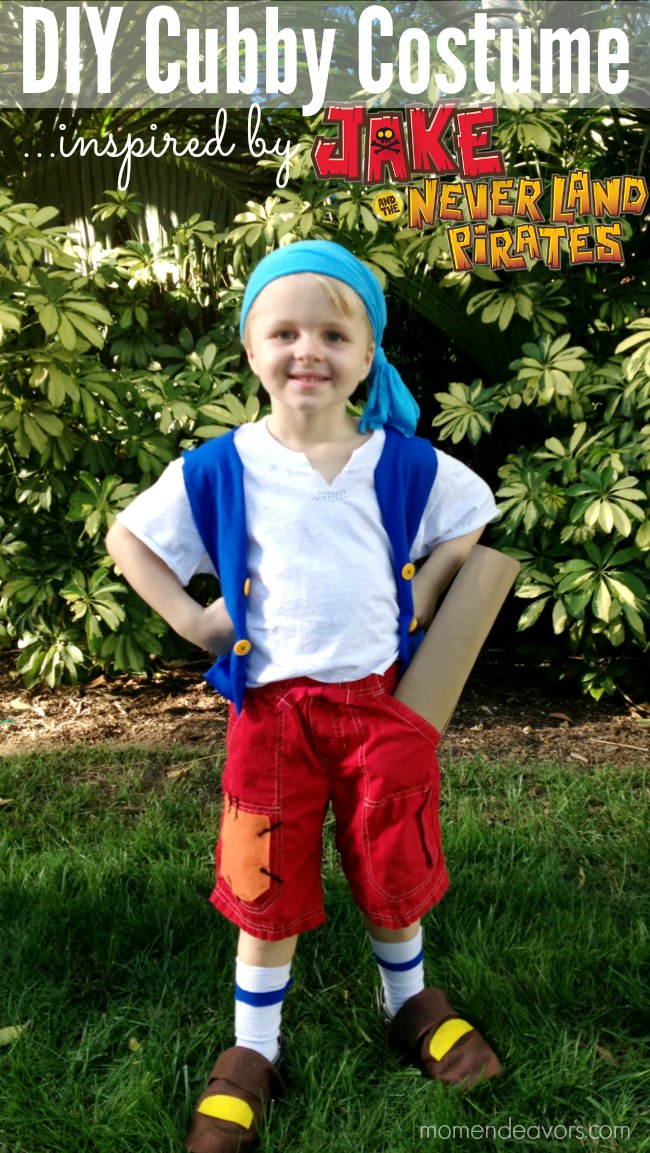 With a trip to Disneyland this year for Mickey’s Halloween Party (where everyone can dress in costume), we decided on doing a Disney Junior Jake and the Never Land Pirates theme for our family Halloween costumes this year!  Little Brother is a dead-ringer for Cubby, so his character was an easy choice. The costume was VERY easy to make and other than just a tiny bit of hand stitching, it’s all “no-sew”! 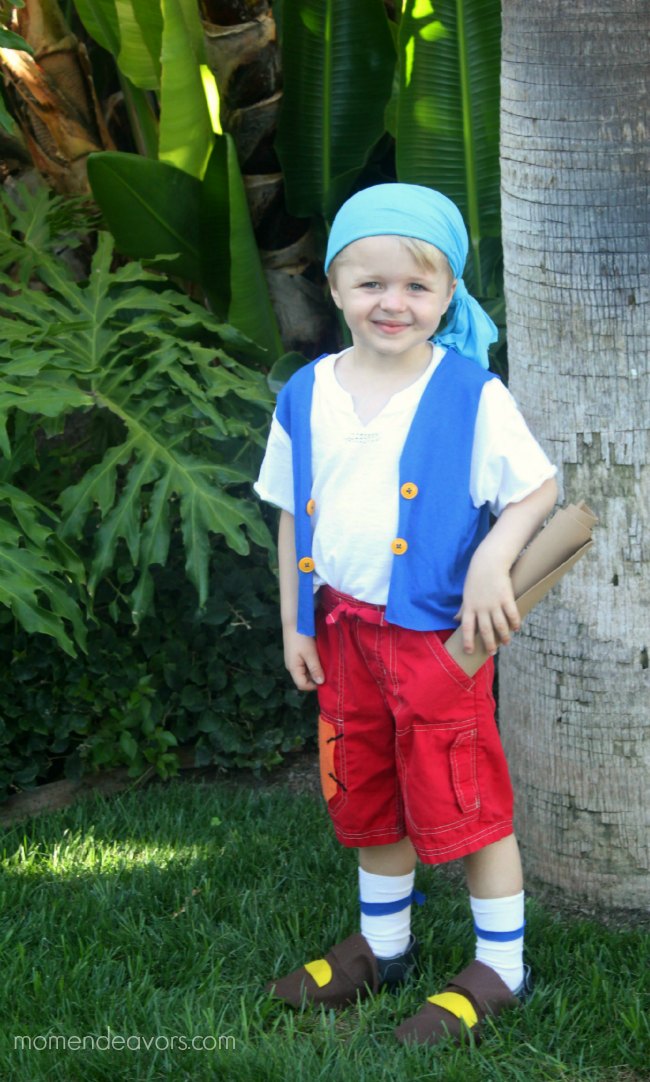 How cute is he?! I know I’m totally biased, but seriously! Love it! 😉 Like I said, this costume was VERY easy to make with just a few supplies. The vest is just a cut t-shirt. Doesn’t get much easier than that! So, to make a Cubby costume, here’s what you’ll need: 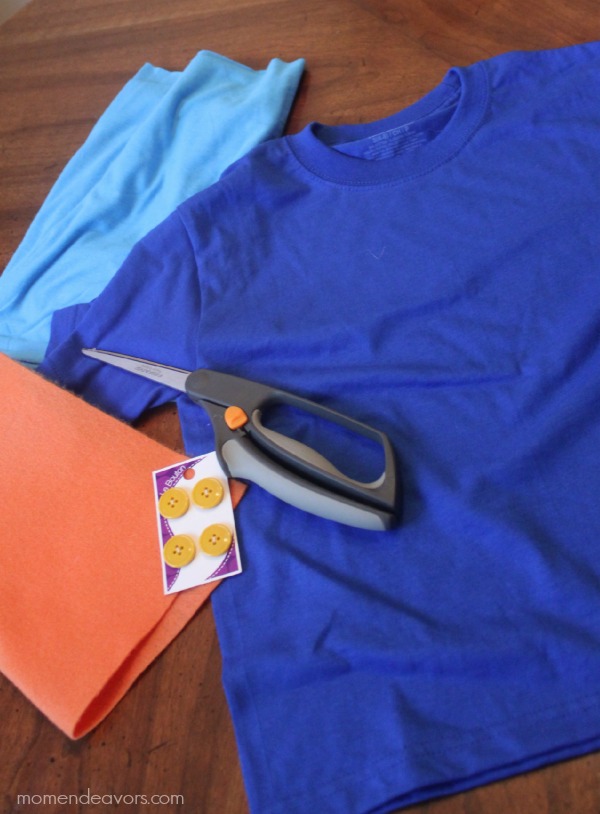 Like I said, the majority of this costume is SO easy– as long as you can use scissors, you can make this! First up, cut a white t-shirt so it’s shorter; cut the sleeves; and cut a notch in the neck line. If you want to make it look even more authentic then, hand stitch the little black zigzags just under the notch.

For the vest, cut the sleeves off at the seam to start (if you decide to make it more narrow, you can always cut in a bit more). Then, cut the neck band out and the bottom hem line off. Finally, cut up the middle of the shirt to make it a vest. Depending on the size of your little pirate, you can decide how much to cut off the middle in order to look right. Once that’s done, you just need to sew on the buttons. That’s just a simple hand stitch. Or…if you want to make it truly no-sew at all, then you could just cut “buttons” from yellow felt. 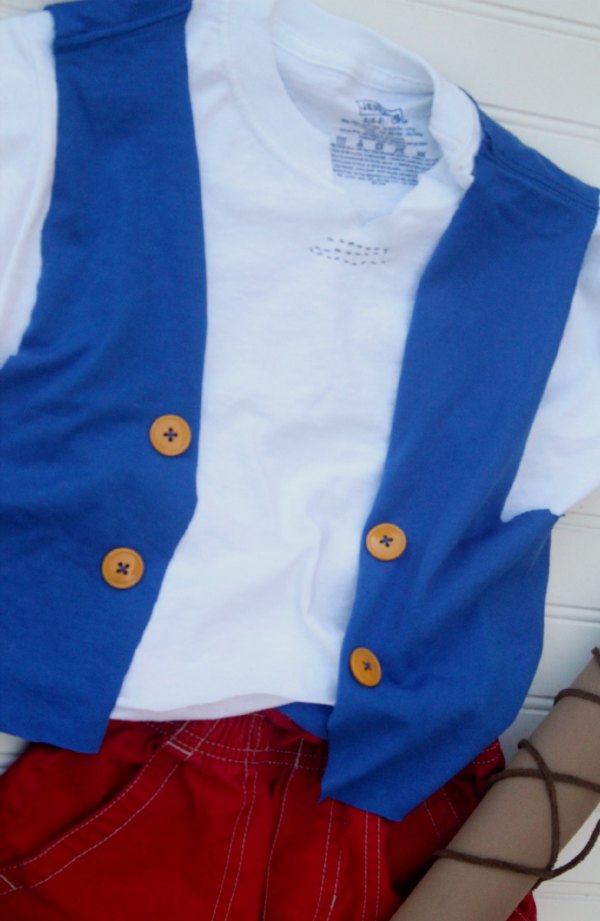 For the shorts, all you need to do is add an orange “patch” out of cut felt. We did that by just tacking it down with a couple of hand stitches (because they are good shorts that he actually wears). If they were shorts you didn’t care about though, you could even just hot glue down the felt. To keep it more detailed like the costume, we used some black ribbon around the patch. Then, tie on the blue skull cap and you can be done! 😉

But…if you want to get a little more detailed, you can make simple shoe covers to look like Cubby’s boots. This part was a total after thought, so I didn’t take any process pictures. But, it was SO easy. I just cut brown felt in the general shape of front of a boot. I folded down the bottom edge and glued down a piece of gold felt to look like a buckle. Then, we attached a piece of elastic that would sit in the bottom arch of shoe. Simple and not perfect, but from the front, it really added a lot. 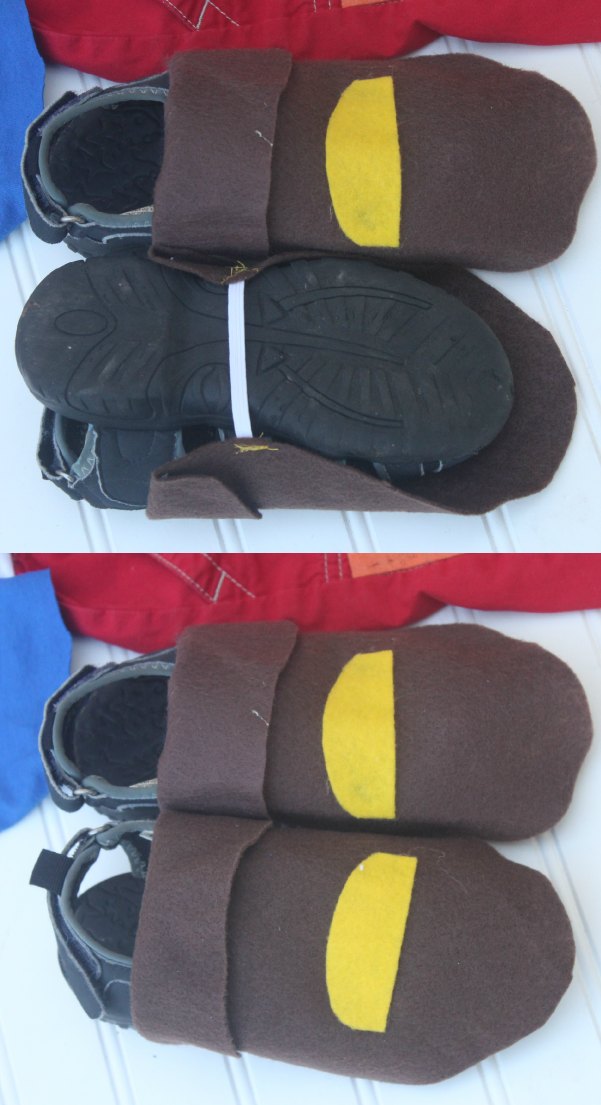 The last embellishment was not planned either. Once the costume was all done, Little Brother said, “Mommy, what about Cubby’s map?!” You see, in the show, Cubby gets a special map of Never Land from Peter Pan. So, needless to say, Cubby HAD to have a map. Luckily, I had a long sheet of beige foam in my crafting stash. So, I roughly sketched out a drawing (with markers) from an image of Cubby’s map that I found online. Then, we rolled the map up and tied it with some thin leather “ribbon”. 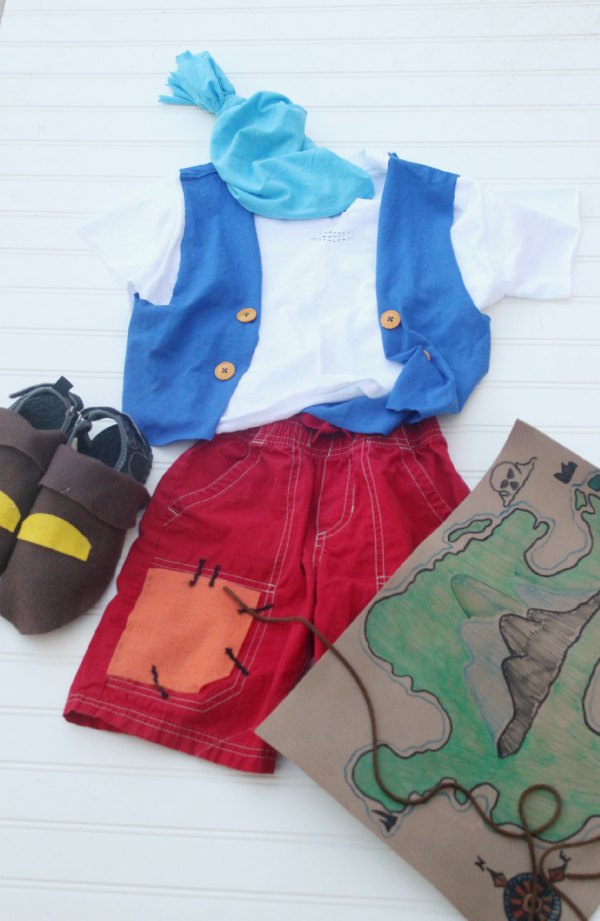 Thankfully, he LOVED it! And, really, he was just so thrilled with the whole costume! I love how it turned out and how easy it was to do. After Halloween, I’m sure this will go in the “imagine bin” and will be a favorite dress-up item! We couldn’t resist some pictures with his favorite Jake stuffed animals! 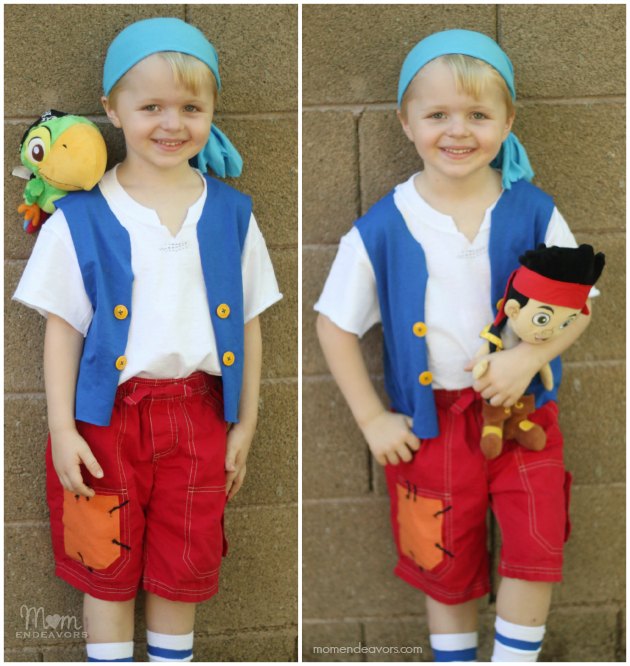 Love it! He makes just the cutest little Cubby! And, he looked adorable next with Baby Brother as Skully! Jake and the Never Land Pirates was such a fun family costume theme – perfect for Halloween Time at Disneyland! We can’t wait to do it again for Halloween! 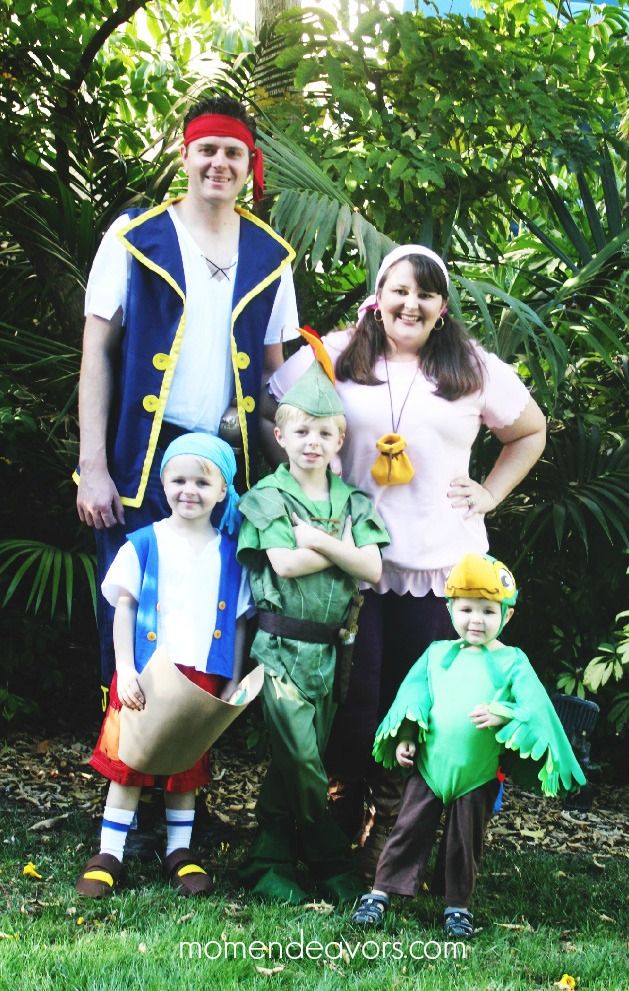 Do you have little Jake and the Never Land Pirates fans?

For more DIY Disney costume ideas, be sure to check out the following posts… 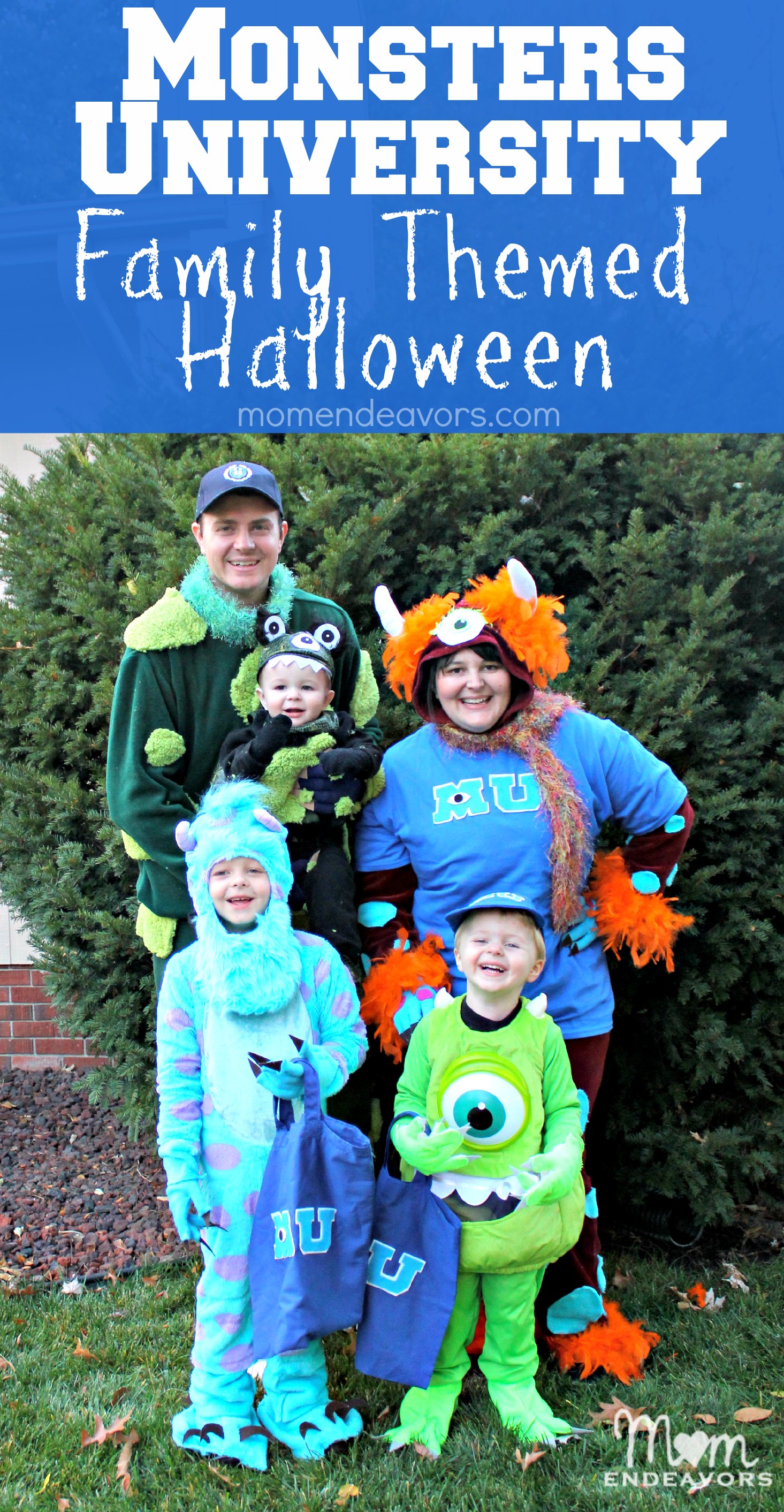 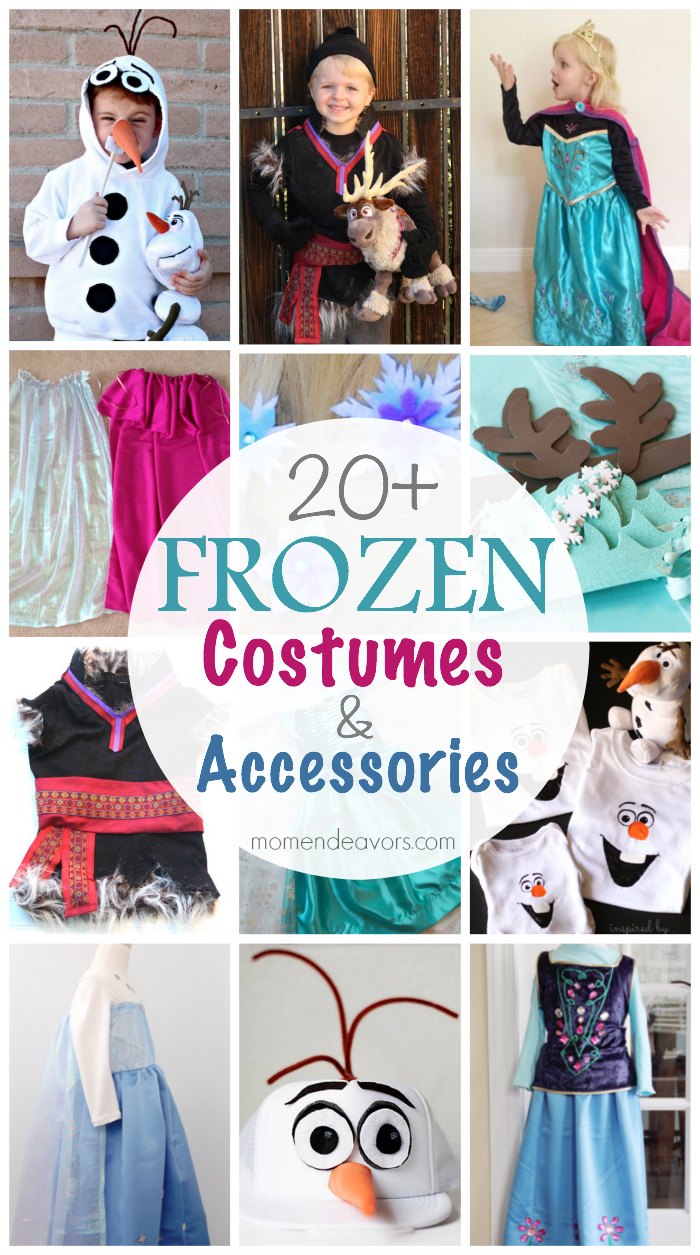 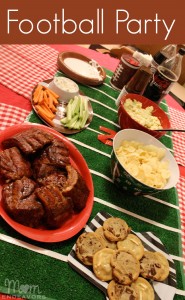 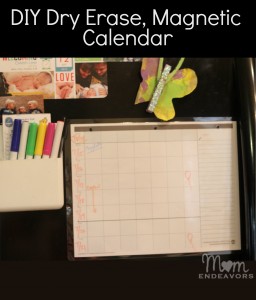