Disney’s Maleficent Movie Review – Is it ok for kids? 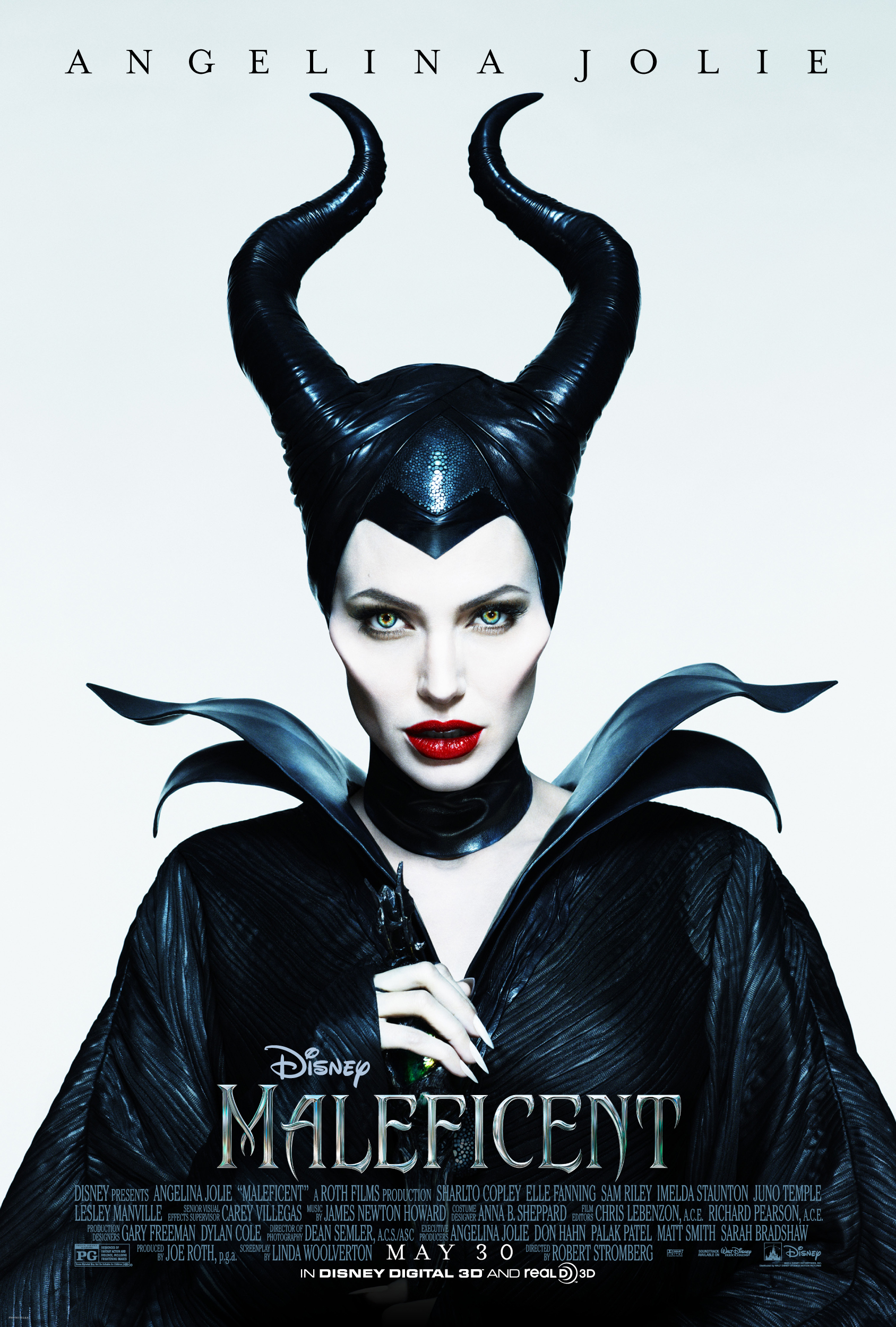 Ever heard that there are two sides to every story? Well, now the world gets to see the scariest Disney villain’s side of the story and it’s a bit different than what you might expect! Disney’s Maleficent hit theaters today {May 30, 2014} – a movie I’ve been excited for since I first heard about it!

At Disney Social Media Moms, we had the pleasure of getting an extended look at the movie with the Executive Producer (which only added to my excitement). Plus, we got to hear from the adorable Elle Fanning about her work as Aurora in the film. We even helped her celebrate her 16th birthday! 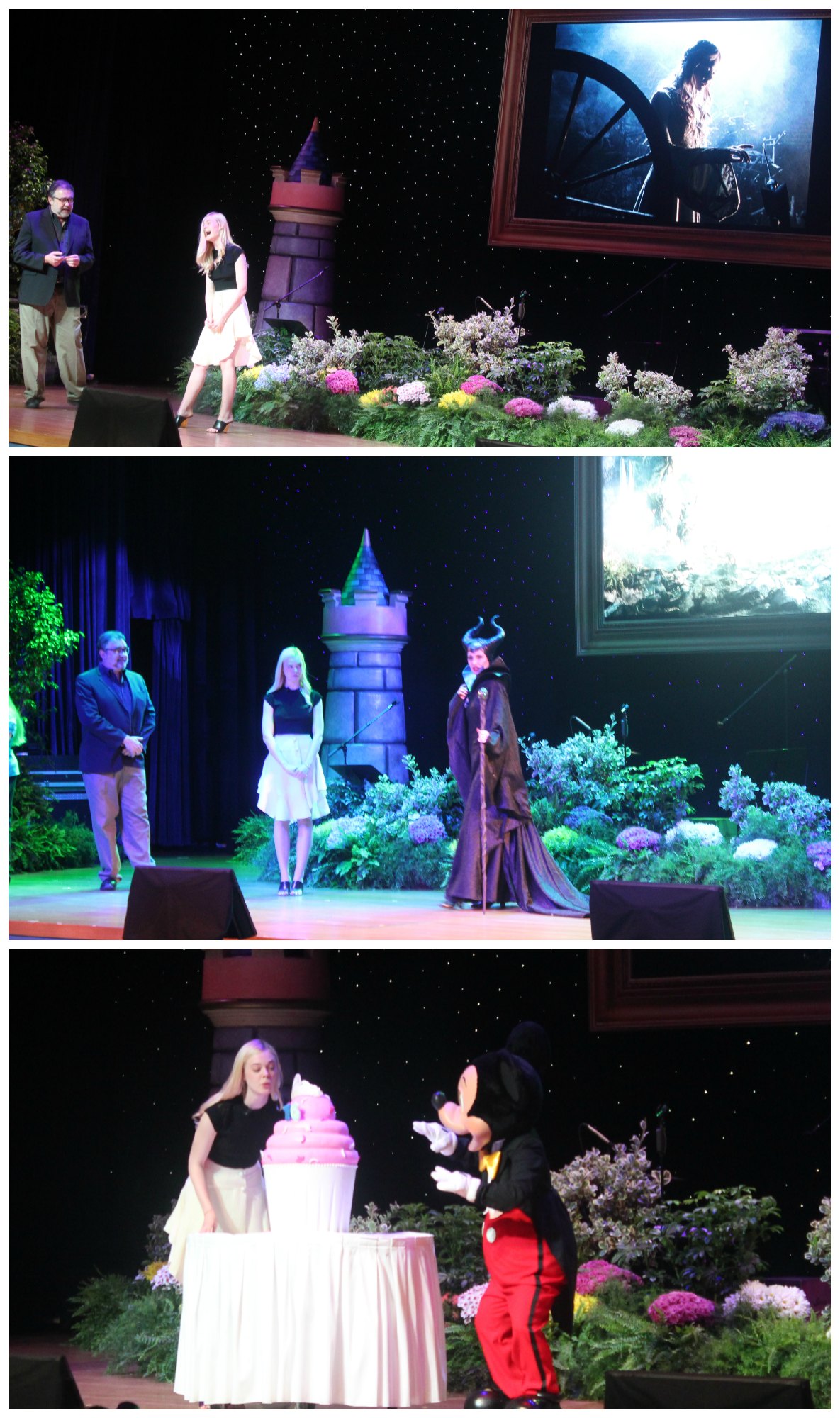 It really was quite the glittering assemblage. So, it comes as no surprise that Maleficent crashed the party. She was every bit as regal, cold, intriguing, scary and exciting as you might imagine! 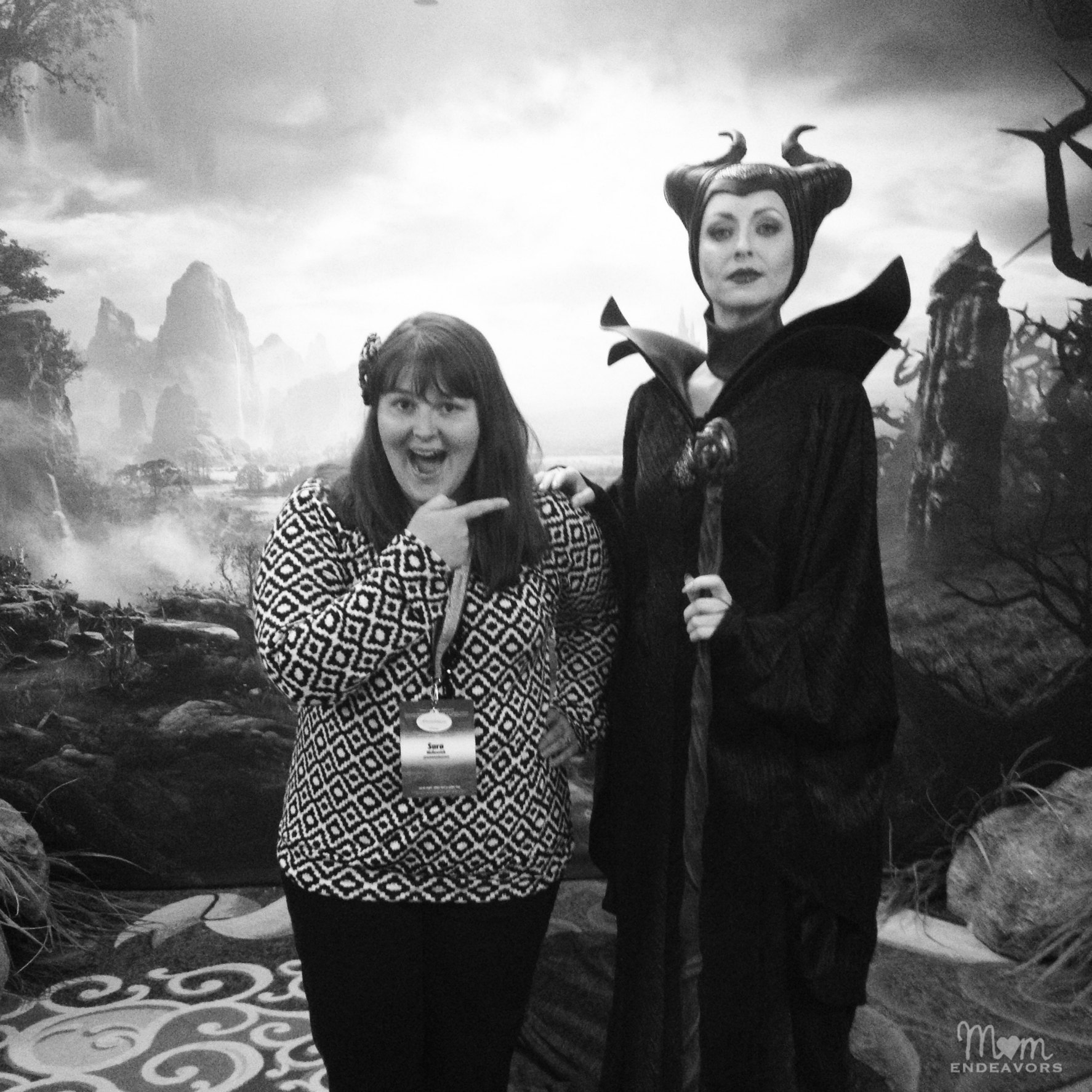 So, we know she was magnificent in person. But, what about her movie?…
About the movie:
[From the press release…]

“Maleficent” explores the untold story of Disney’s most iconic villain from the classic “Sleeping Beauty” and the elements of her betrayal that ultimately turn her pure heart to stone. Driven by revenge and a fierce desire to protect the moors over which she presides, Maleficent cruelly places an irrevocable curse upon the human king’s newborn infant Aurora. As the child grows, Aurora is caught in the middle of the seething conflict between the forest kingdom she has grown to love and the human kingdom that holds her legacy. Maleficent realizes that Aurora may hold the key to peace in the land and is forced to take drastic actions that will change both worlds forever.

If the trailer alone doesn’t convince you, I am here to tell you that Angelina Jolie {Maleficent} is absolute perfection in this role. Truly, she is stunning as Maleficent. And, to be perfectly honest, I’m not normally a big Jolie fan. In this though, she is magnificent. One scene in particular, after her betrayal, is probably the most traumatic moment in any fairy tale story we’ve seen. Angelina’s acting is so incredible there, the moment is truly gut-wrenching. She does have many softer moments in the film though. And, it was extra cute to see her on screen with her daughter who plays the toddler Aurora. 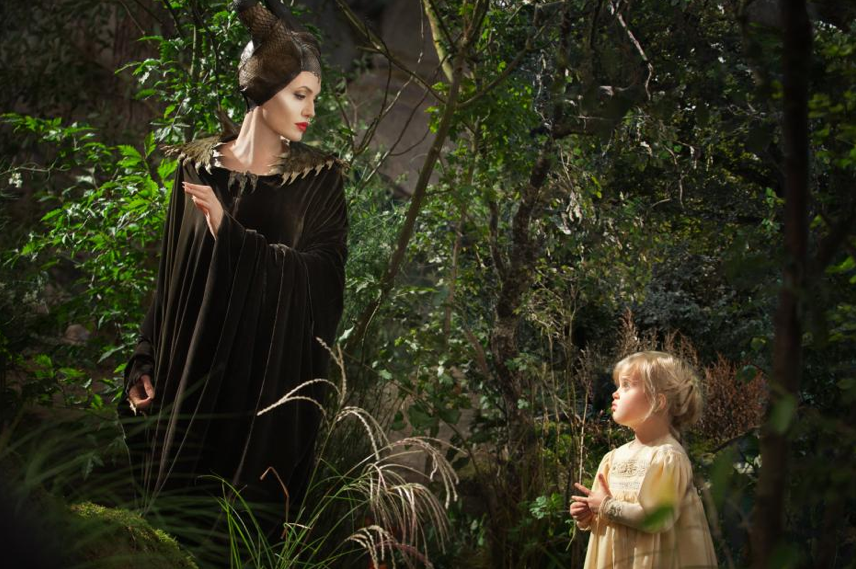 The visual imagery in the movie is stunning as well! The moors, that Maleficent will stop at nothing to protect, are filled with every sort of magical flora & fauna. Those scenes really help to add to the fantasy and fairy tale nature of the film. 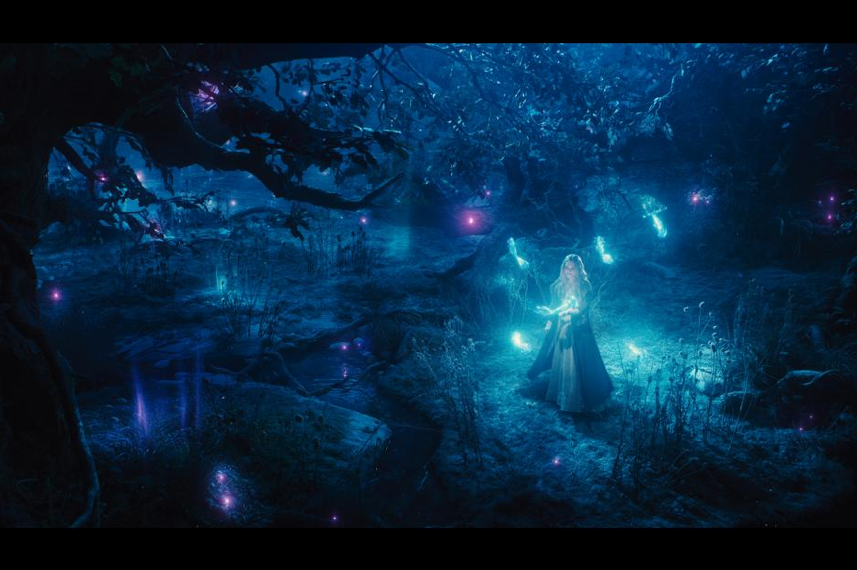 So, it probably comes as no surprise that I LOVED the movie. The twist on the Sleeping Beauty story, the psychological conflict, the imagery – it’s fabulous. But, part of me was watching the movie with my “mom glasses” on, looking for answers on what to say when asked, “is it ok for kids”. 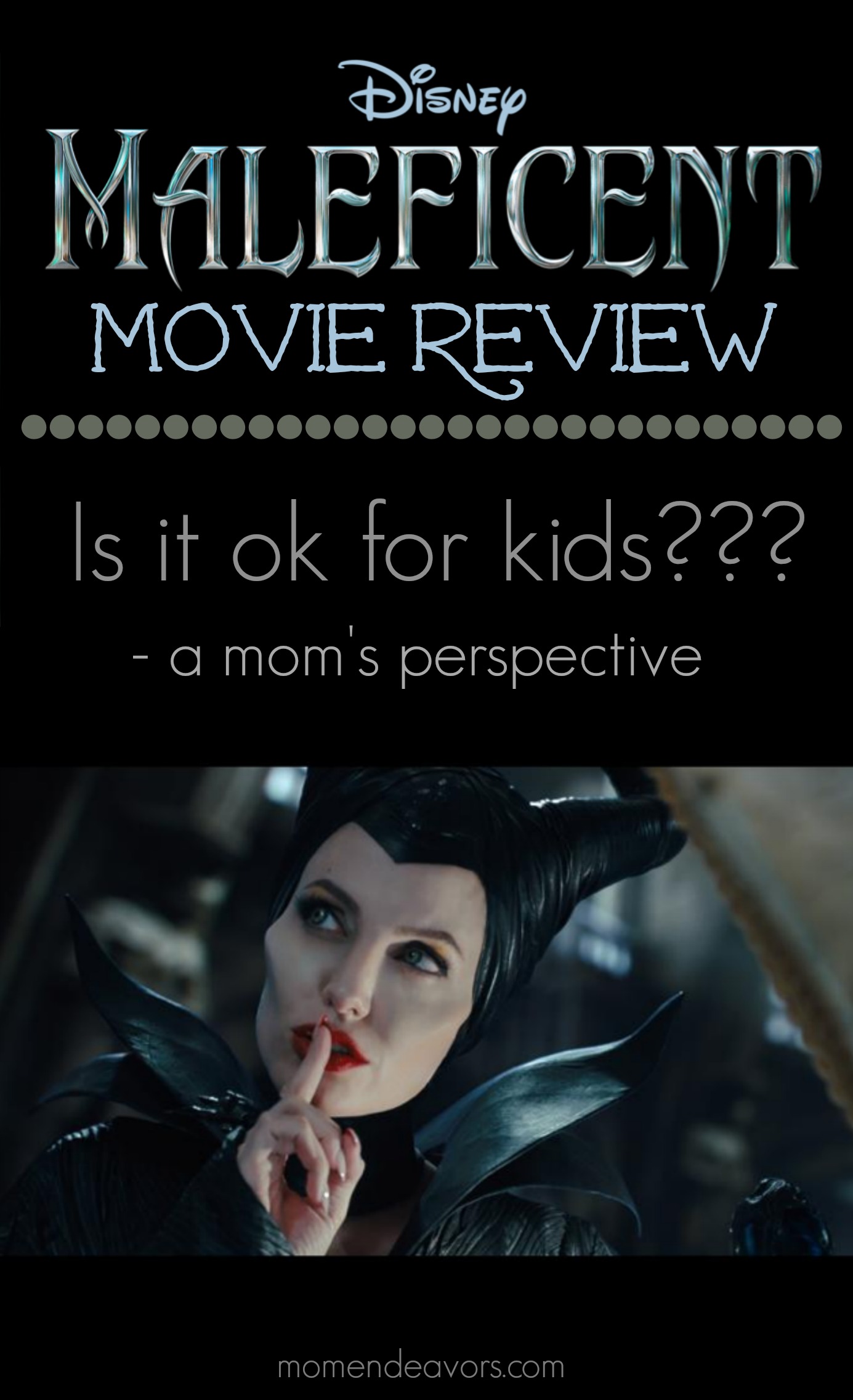 So, when considering if this is “ok” for YOUR kids, here’s what you need to know:

Where does that leave us on an answer? Well, if you’ve read my other reviews like this, it’s going to come as no surprise that I say, “it depends”. It depends on the ages of your kids, their maturity level, their experience with other films like this, and your parenting philosophy.

For me personally though, I don’t think this movie is appropriate for kids under 9 or 10. Friends have asked if we are taking Big Brother to see it (he’s 7) and the answer is no. While I think he would love the dragon and the fighting and the magical creatures, there is really A LOT of deep emotional/psychological stuff going on in this movie that is way WAY above his level of understanding (some of which was even hard to watch as an adult). While I don’t think there is anything that “bad” (no nudity, sex, cursing, blood/gore) or really that horribly scary in the movie, the intense concepts and a few poignant scenes are just things I don’t think my boys need to see at such young ages. Honestly, even with a PG label, I really think the targeted audience of this movie is teens (maybe including preteens) and adults. And, for those older kids and adults, this is a GREAT movie!

I will say though, our kids have not seen many live-action movies (aside from the original Star Wars). They haven’t seen Narnia, the Avengers, Spiderman, Superman, Harry Potter, etc. They are plenty happy with animated Disney shows like FROZEN and Planes, so I’m happy to keep it that way while they are little. If your kids have seen live-action films like the ones listed above and they do ok with those, then there would be NO problem with them seeing Maleficent. But, for our family, we’ll be saving this one for a family night in a few years down the road. In the meantime though, I’ll happily go on a date night to see it again! 😉

Have YOU seen Maleficent? What are your thoughts? 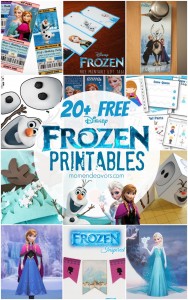 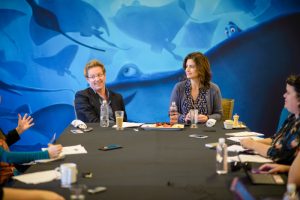