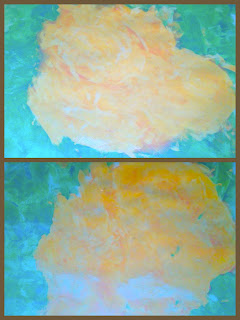 I wanted to do something pumpkin themed with the kiddos today (I watch a friend’s kids two days a week).  But, I forgot my craft stuff this morning. So, in looking around their crafting stash, I found this: 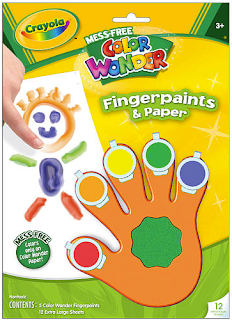 I saw that there was orange & green and figured we could attempt to do some sort of pumpkin art with them.  So, we talked about October, Halloween, and pumpkins.  Then, I told the boys to make a big orange pumpkin on their papers.  After the pumpkins couldn’t get much bigger, we got the green out to do some stems–but they went a little green crazy.
Now, the cool thing about these fingerpaints (besides the mess-free part) is that they don’t really blend together.  It’s a gel and even if the boys put green where the orange was, the green didn’t show up (because the “magic” paper was already wet & covered in that area). So, their pumpkins were left nice and orange in the middle, with the green “vines” all around–giving us some beautiful abstract pumpkin art! 🙂

(These photos don’t do it justice…along with forgetting my craft supplies, I didn’t have my camera.  So, these were taken with the computer’s built in camera).
As for the paints, they were AWESOME for giving us this “abstract” art.  That would have never been possible with traditional fingerpaints.  And, since the paints are gels, the paper is shiny when it dries, which gives it a more artistic appearance. Also, the lack of paint mess everywhere is a plus.
The big down side is that there is very little product.  We used almost all the orange and green on just these two pictures. So, if you are going to buy these, just know that you will run out fast!