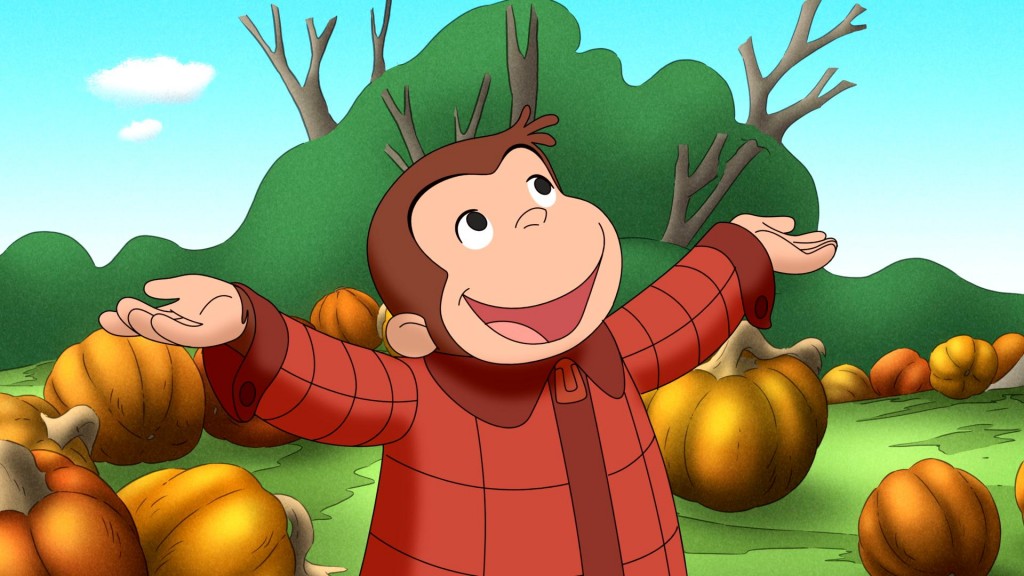 Are you ready for some Halloween week fun?!  You’re invited to the spooky return of CURIOUS GEORGE: A Halloween Boo Fest on PBS KIDS! On Monday, October 27, everyone’s favorite monkey returns in his Halloween special, kicking off season 9 with a week of new episodes from the popular series! New adventures with CURIOUS GEORGE debut on PBS KIDS October 28-30, including George testing his super spy skills and exploring an aviation museum. October 28 features the premiere of “Submonkey,” an underwater adventure that includes the song “Down, Down, Down,” performed by Belinda Carlisle (lead vocalist of the Go-Go’s). 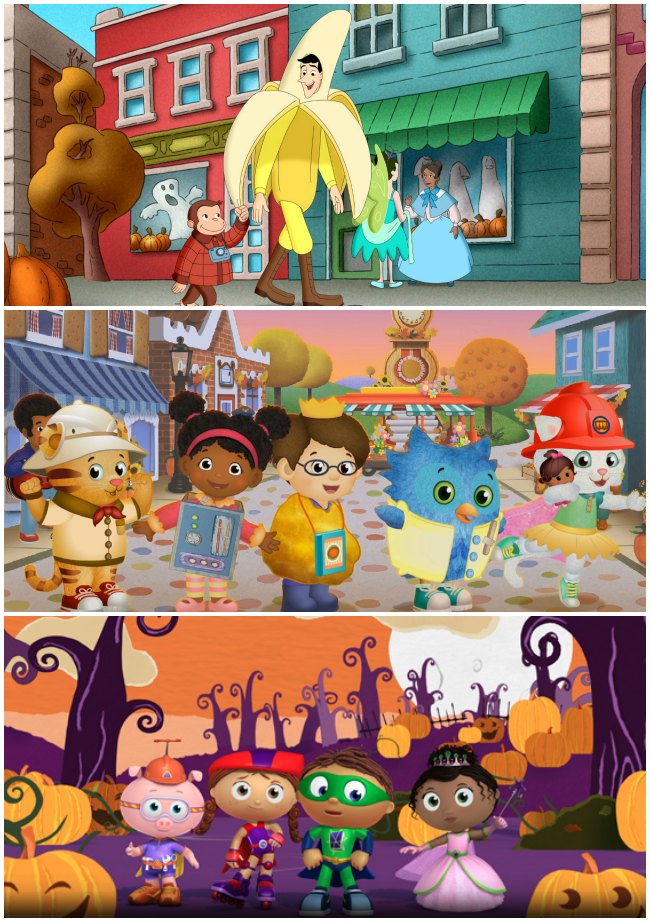 The week of Halloween will also feature Halloween-themed episodes from other PBS KIDS shows, including DINOSAUR TRAIN, DANIEL TIGER’S NEIGHBORHOOD, WILD KRATTS, and more.  Here’s the full list of PBS KIDS’ 2014 Halloween programming (along with air dates): Be sure to check your local listings for specific times!!!

It’s George’s first Halloween in the country, and Bill tells him and Allie about the Legend of No Noggin – a spooky tale about a hat-kicking scarecrow who haunts the countryside on Halloween.  But is the legend really real? George and Allie are determined to find out by taking a picture of No Noggin in hat-kicking action.  But first, George needs to figure out what he’s going to be for Halloween so he can win the costume contest at the town Boo Festival.  Will George’s quest for the perfect costume interfere with his quest for the truth? Only the curious will find out!

The Pteranodon kids are playing a game called “I’m the Biggest,” which raises the question: how big is the biggest frog? Dad takes the kids on the Dinosaur Train to find the biggest frog ever, the legendary Beelzebufo. Once off the train, they have to take a river raft to find this illusive creature, but find him they do. The kids are surprised that Benny Beelzebufo isn’t nearly as large (or mean) as they’d imagined, but he is definitely the biggest frog they’ve ever seen! Benny teaches the kids about his “sit-still-and-wait” hunting style and shows off his large, floating leaf “home.”

The Pteranodon family rides the “Night Train” all the way back to the Jurassic Period to visit their nocturnal friend, Vlad Volaticotherium, who tells them that he wants to take them caving!  Buddy, Tiny, Shiny and Don don’t even know what caving is, but they are soon having a great time seeing all the beautiful stalactites and stalagmites that have formed inside the cave.  They also learn that it can be a lot of fun to hear your voice echo down the cave’s long caverns!

THE CAT IN THE HAT KNOWS A LOT ABOUT THAT!

So many fun episodes this week! Be sure to check your local listings for airtimes and have fun watching! It would be the perfect time to make a few fun Halloween treats too! 🙂

Dis­clo­sure: As a PBS KIDS VIP blog­ger, I occasionally receive some promotional materials. How­ever, all opin­ions and expe­ri­ences are entirely my own. We were HUGE PBS Kids fans long before being a PBS KIDS blogger!