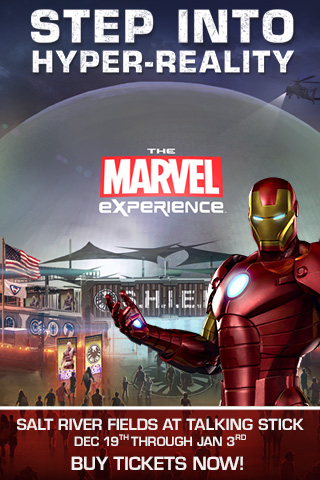 Do you have Marvel fans? Super Hero fans of all ages are going to love the all-new Marvel Experience and the awesome giveaway below! And, those of us here in Arizona are especially lucky as this fun experience kicks off in Phoenix!

In case you haven’t heard about the experience yet, here’s some details from the press release…

The Marvel Experience is a first-of-its-kind, hyper-reality attraction that covers over two acres and encompasses seven colossal Domes, a life-size Avengers Quinjet, the world’s only 360-degree, 3-D stereoscopic full-Dome attraction and a state-of-the-art 4-D motion ride.

As agents of S.H.I.E.L.D. in training, guests of The Marvel Experience will swing with Spider-Man, smash with Hulk, fly with Iron Man and more, all in preparation for an epic battle alongside Marvel’s biggest Super Heroes in a fight against Red Skull, M.O.D.O.K. and an army of evil Adaptoids. The Marvel Experience incorporates next-generation interactive technology including augmented reality, multi-person gaming and RFID progress tracking so you can see yourself in action. Everything happens with bleeding-edge technology and advanced computer animation. There’s nothing else like it. Not only does the audience get to join the adventure, in the end they may even become heroes themselves.

This first-ever hyper-reality touring Marvel adventure will preview in Phoenix from December 12, 2014 – January 3, 2015. The World Premiere will take place in Dallas, with a red carpet event scheduled for January 9, 2015. Promoted by Cohl’s S2BN Entertainment, the first leg of the North American tour will also feature stops in San Diego and San Francisco before heading back toward the East Coast, and will remain in each market for approximately three weeks. Future markets will be announced on a rolling basis. 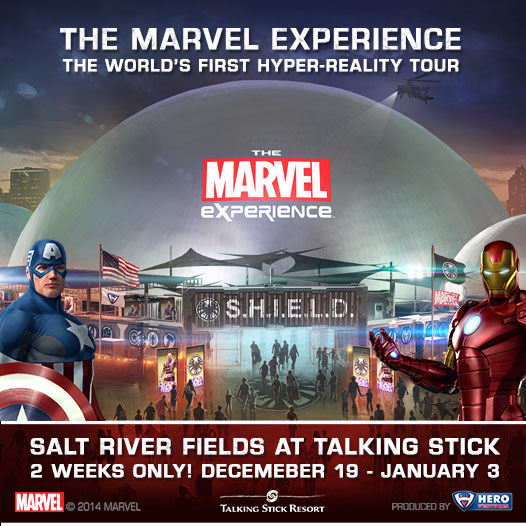 Sounds great for Marvel fans, right? Tickets to the Experience would make a GREAT Christmas gift for your favorite Super Hero fans. And, winning a family 4-pack would be a pretty sweet gift too!